Accessibility links
Social Media Spreads Rage, But Kindness Can Stop It In Its Tracks : Shots - Health News Emotions circulate through social networks — the good, bad and ugly. And these days, the feeling that seems most viral is anger. Sometimes it takes just one act of kindness to stop the vicious cycle. 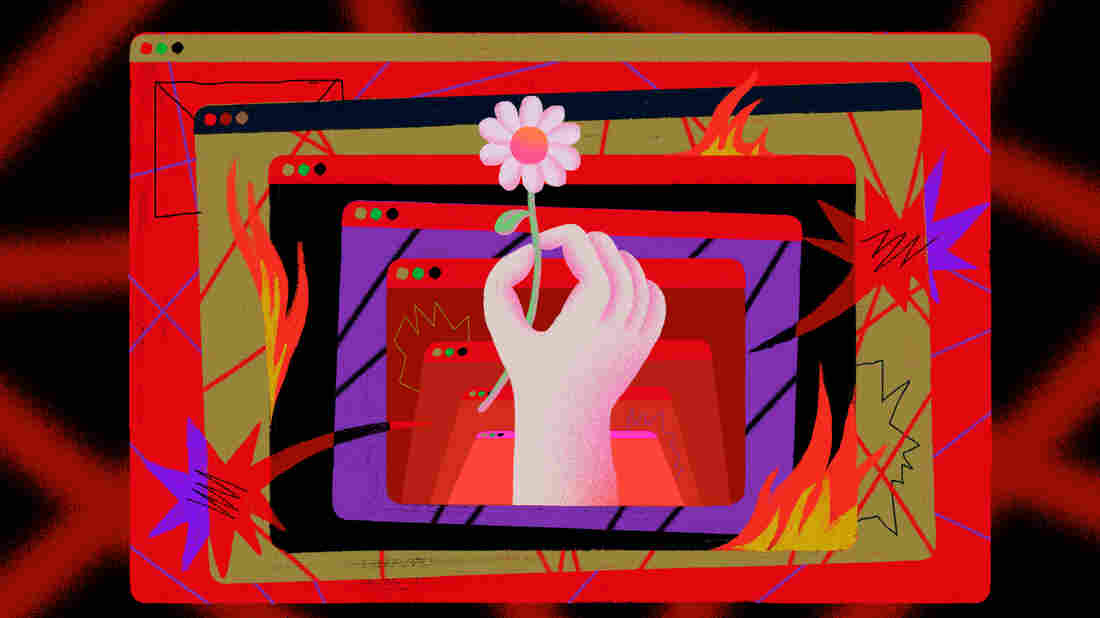 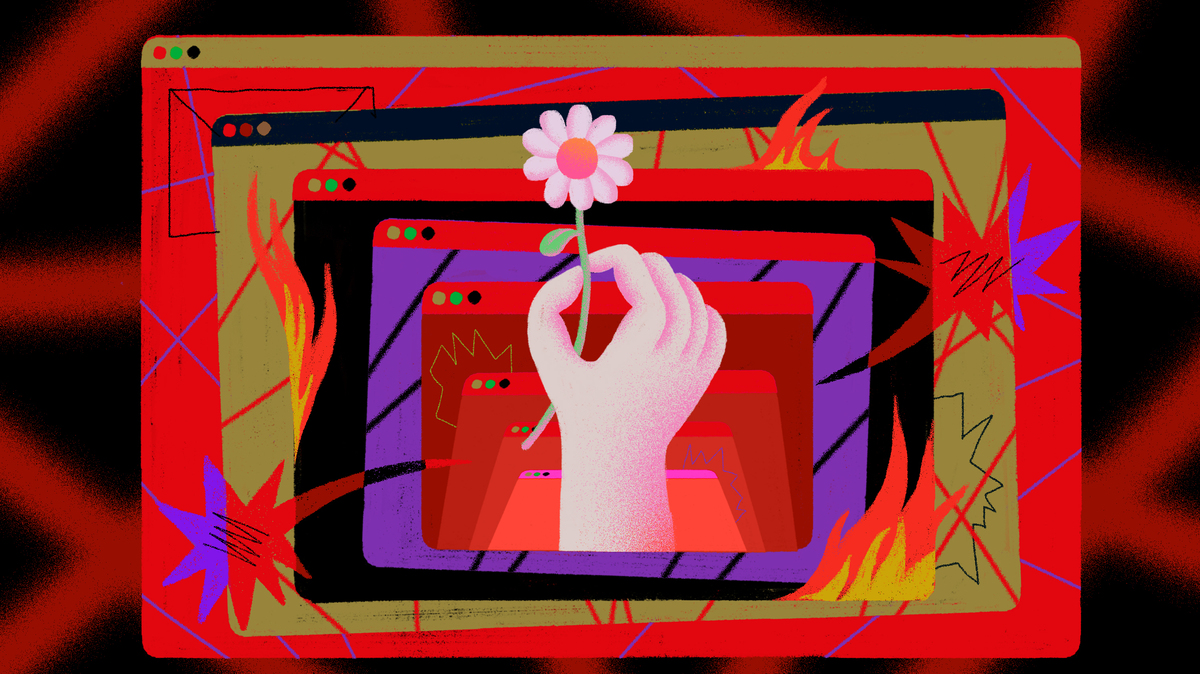 Even if you're not aware of it, it's likely that your emotions will influence someone around you today.

This can happen during our most basic exchanges, say on your commute to work. "If someone smiles at you, you smile back at them," says sociologist Nicholas Christakis of Yale University. "That's a very fleeting contagion of emotion from one person to another."

But it doesn't stop there. Emotions can spread through social networks almost like the flu or a cold. And the extent to which emotions can cascade is eye-opening.

For instance, Christakis' research has shown that if you start to become happier with your life, a friend living close by has a 25 percent higher chance of becoming happy too. And your partner is more likely to feel better as well. The happiness can even spread to people to whom you're indirectly connected.

To document this, Christakis and his colleagues mapped out the face-to-face interactions of about 5,000 people living in one town over the course of 32 years. Their emotional ups and downs were documented with periodic surveys. "We were able to show that as one person became happy or sad, it rippled through the network," Christakis says.

It's not just happiness that spreads. Unhappiness and anger can be contagious too.

And you don't have to be in the same house or city to catch someone else's emotions. There's evidence that emotional contagion can spread through our digital interactions too.

Say you're in a negative mood, and you text your partner. A research study, dubbed, "I'm Sad You're Sad," documented that in these types of text exchanges, your partner is likely to both sense your emotion and mirror it.

So, just how far does this go? A study of nearly 700,000 Facebook users suggests we can pick up on — and mirror — the emotions we encounter in our social media feeds too.

"We found that when good things were happening in your news feed — to your friends and your family — you also tended to write more positively and less negatively," says Jeff Hancock, a communications researcher at Stanford University and author the two studies on digital interactions

And the reverse was true too. Viewing more negative posts prompted people to write more sad or angry things. Overall, the effects were very small, compared with what has been documented in face-to-face interactions, "but [the study] suggested that emotions can move through networks through contagion," Hancock says.

A lot of us have seen this play out on our social media feeds, especially on Twitter. Late-night TV host Jimmy Kimmel pokes fun at angry tweets by asking celebrities and famous athletes to read aloud the mean things that have been tweeted about them. "Draymond Green's jump shot is almost as ugly as his face," NBA player Draymond Green read to an audience last June. "Whoa!" the audience responded.

It's funny in the moment. But when you're on the receiving end of a personal attack, it's hurtful. And it increases the likelihood that you'll lash out in return.

One study finds there may be a little bit of troll in each of us. If you read a nasty message from a troll that dishes out sarcasm or a personal attack and you happen to be in a bad mood, the research shows you're more likely to copy the troll-like behavior.

Bottom line: It's easier to be mean from behind a screen. The rules of face-to-face interactions don't exist. "There are fewer cues," Hancock says. You don't see or hear the person on the receiving end of your tweet or post. "That makes it a little harder to view you as a person," he says.

This is what happened to a Twitter user named Michael Beatty who lives in Alabama. He's 65 and served in the military during the Vietnam War. Earlier this year, he got ticked off when he read a tweet written by comedian and actor Patton Oswalt. It was a negative tweet about President Trump.

"So I did a knee-jerk reaction," Beatty told us. " I sent him two tweets back."

Beatty says he told Oswalt: "I enjoyed seeing your character in [the movie] Blade: Trinity die so horribly." In another tweet he poked fun at the actor's height.

Looking back, Beatty says, "it was harsh, uncalled for, embarrassing."

Patton. You have humbled me to the point where I can barely compose my words. You have caused me to take pause and reflect on how harmful words from my mouth could result in such an outpouring. Thank you for this and I will pass this on to my cousin who needs help. A cascade. pic.twitter.com/6Is7KflPeY

And Oswalt's response? The actor scrolled through Beatty's feed and learned that he had some serious health issues. After a long hospital stay, he had medical bills piling up.

Next thing Beatty knew, Oswalt had donated $2,000 to Beatty's GoFundMe account and encouraged his millions of followers to follow his lead. "This dude just attacked me on Twitter and I joked back but then I looked at his timeline and he's in a lot of trouble health-wise," Oswalt tweeted. "I'd be pissed off too. He's been dealt some s***** cards — let's deal him some good ones."

Beatty began to hear from Oswalt's followers. Some donated money; others sent encouraging messages. His GoFundMe account grew to about $50,000.

Oswalt's generosity spread. "It had a large cascade effect," Beatty says. "I honestly, truly thought I was dreaming and this couldn't happen in real life."

One act of kindness led to the next.

"I realized that knee-jerk reactions to things [are] not the way to go," Beatty says. It led him to slow down and reflect. "What kind of person have I been?" he asked himself.

I want to thank everyone who came to my aid with generous outpourings- and also to @pattonoswalt without whom I would not be the recipient of so much love and support. I'm not a man who ever cries but I had to wait to send this. And to quote Stuart on Big Bang "meat tonight"! pic.twitter.com/r4Kc9zYk7E

He says when he wrote those angry tweets, he was in a bad place, angry at himself for letting his health deteriorate: "It was easy to snap back and snarl."

But Beatty says the empathy shown toward him changed him. He has begun to think, "People are good." He realizes that politics divide people, but one on one, "people are caring, generous, helpful."

Over the last month, he says, he has felt his anger fade away. This manifests in lots of small ways. For instance, he used to have serious road rage. But now "if someone wants to get over, I'll wave them in," Beatty says. "I have changed."

This story reminds us of what we should already know (and hopefully remember from watching Mister Rogers): "It's good for us to be kind," Hancock says.

Not only is it good for the world around us, but it makes us feel a lot better and disarms anger.

"There's lots of scientific evidence that when you are kind or express gratitude you get all kinds of psychological benefits," says Hancock.

So next time you're tempted to respond to an angry post, maybe you'll remember this story.

Anger leads to more anger. But a single act of kindness can help stop the spread.