Accessibility links
HIV Eliminated By Bone Marrow Transplant In Cancer Patient : Shots - Health News British doctors report the apparent eradication of HIV from a patient who was undergoing treatment for cancer. It's only the second time this has been accomplished, despite many attempts. 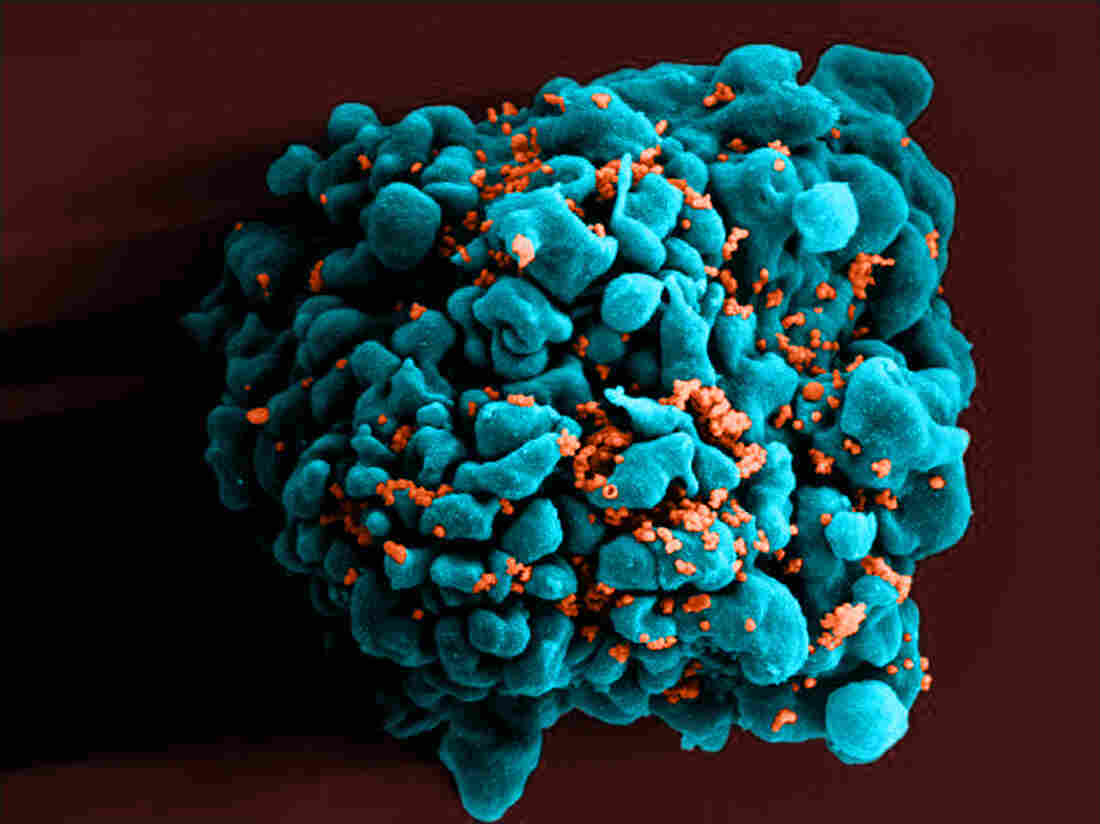 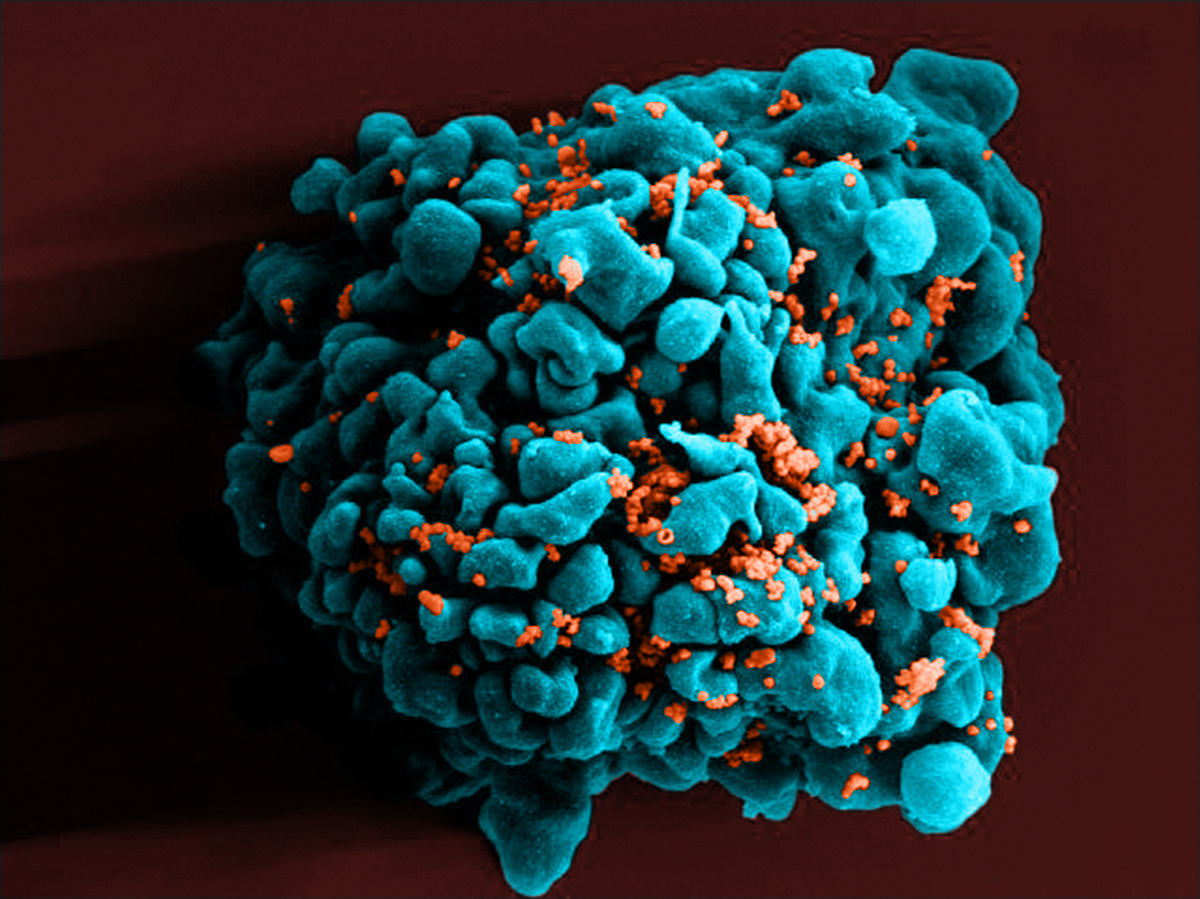 A color-enhanced scanning electron micrograph shows HIV particles (orange) infecting a T cell, one of the white blood cells that play a central role in the immune system.

Doctors in London say they have apparently eradicated HIV from a patient's body. It's only the second time this has been accomplished, despite many attempts over more than a decade.

While some commentators are calling this a "cure" for HIV, the scientists who performed the experiment say it's too soon to say that. Instead, they say the patient is in remission.

Both cases involved a risky procedure called a stem-cell transplant (otherwise known as a bone marrow transplant). The first recipient, Timothy Brown, gained fame as the so-called Berlin patient after transplants in 2007 and 2008 rid him of HIV. He remains free of HIV today.

That result raised hopes that HIV could be eradicated through a medical procedure and cure people of HIV infection. Yet Brown's case remained the lone success since then. Other attempts had failed.

Now, researchers at University College London report in a paper being published Tuesday in Nature that they have apparently eliminated HIV in a second person.

That man had been diagnosed with HIV in 2003. Then, in 2012 the unidentified patient was diagnosed with a cancer, Hodgkin lymphoma. After standard treatments failed, they gave the patient a stem-cell transplant — essentially killing off his old immune system and giving him a new one.

The doctors selected a donor who had two copies of a particular mutation in the CCR5 gene that prevents HIV from infecting T-cells, a part of the immune system where the virus takes hold and does its damage. As a result, the man ended up with an immune system that was naturally resistant to HIV.

Sixteen months after the man's transplant, doctors found no sign of HIV in his body. They decided to stop treating him with antiviral drugs after he volunteered to stop taking them. It has now been more than 18 months and the infection hasn't reappeared, the scientists say.

Ravindra Gupta and his colleagues write, "it is premature to conclude that this patient has been cured," but they are hopeful that will prove to be the case.

"This is a highly significant study," Aine McKnight, a professor of viral pathology at Queen Mary University of London, said in a statement. "After a ten year gap it provides important confirmation that the 'Berlin patient' was not simply an anomaly."

But McKnight cautioned that this won't necessarily lead to a treatment for anyone with HIV. For one thing, the rare mutation in this case, a variant of a receptor called CCR5, only blocks one variety of HIV. A second, less common form of HIV could still cause infection despite a transplant like this.

This receptor was recently in the news after Chinese scientist He Jiankui claimed he had edited the genes of embryos to include a protective version of CCR5. This experiment raised an ethical furor.

AIDS researchers have known about this CCR5 mutation for years and have tried to think of ways to exploit it as a treatment for HIV.

"Although it is not a viable large-scale strategy for a cure, it does represent a critical moment in the search for an HIV cure," Anton Pozniak, president of the International AIDS Society, said in a statement. "These new findings reaffirm our belief that there exists a proof of concept that HIV is curable."

Stem-cell transplants are expensive and risky, because they involve wiping out a patient's immune system with powerful drugs or radiation and then reconstituting it.

The benefits of this treatment outweigh the risk for cancer patients, which is where it is most commonly used. But HIV drugs have become so effective that many people carrying this infection have a normal lifespan if they take these medications for a lifetime.

The scientists note in their study that the treatment for the second patient was less harsh than the one used for the Berlin patient, raising the possibility that they could develop a less risky procedure for stem-cell transplants for HIV-positive patients.

They say this procedure could be useful now for those rare people with HIV who have also been diagnosed with cancer and are in need of a stem-cell transplant to reconstitute their immune systems. Those patients could benefit if they can find a donor with the rare mutation in CCR5 that protects them from HIV reinfection.