Accessibility links
Bill Of The Month: Costly Knee Brace In Doctor's Office, Much Cheaper Online : Shots - Health News After a sports injury, Esteban Serrano owed $829.41 for a knee brace purchased with insurance through his doctor's office. The same kind of brace costs less than $250 online. 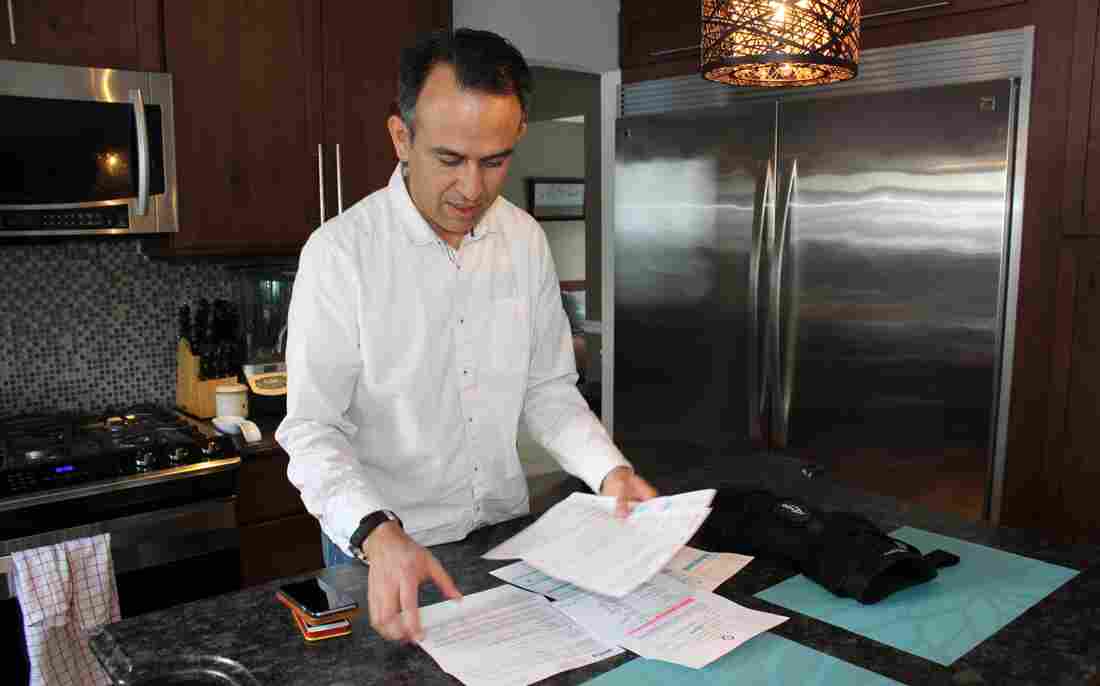 After a sports injury, Esteban Serrano owed $829.41 for a knee brace purchased with insurance through his doctor's office. He says he found the same kind of brace selling for less than $250 online. Paula Andalo/Kaiser Health News hide caption 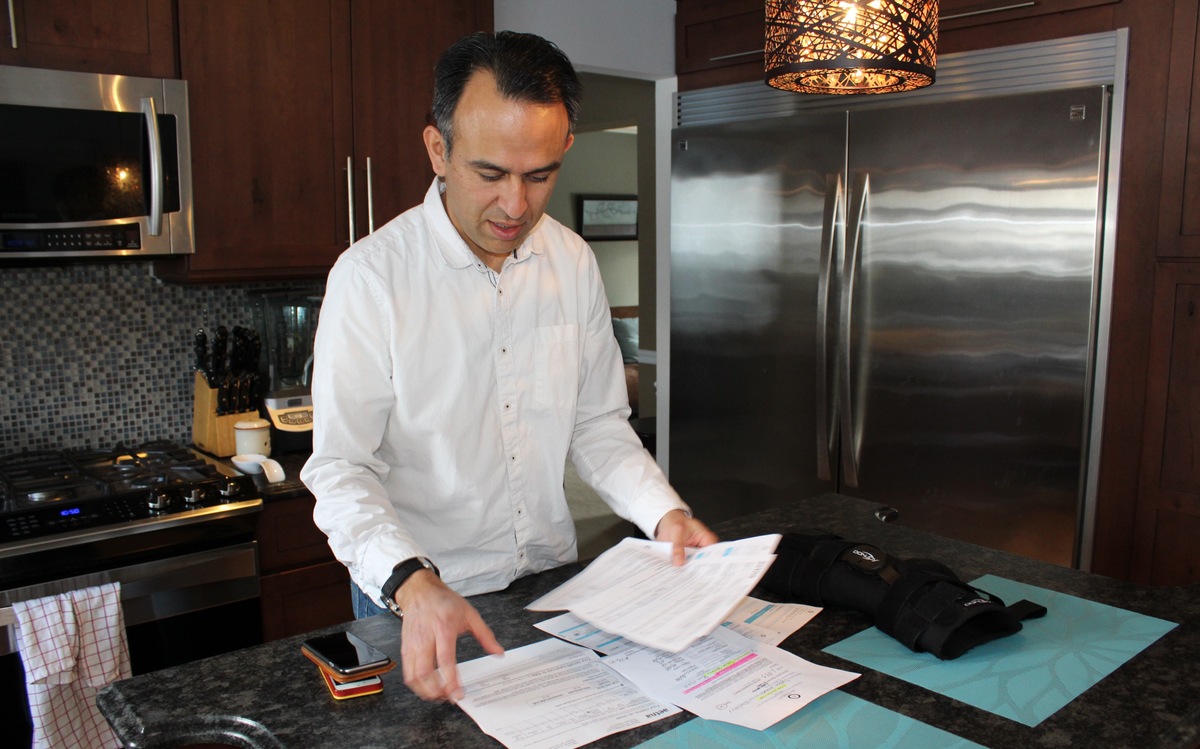 After a sports injury, Esteban Serrano owed $829.41 for a knee brace purchased with insurance through his doctor's office. He says he found the same kind of brace selling for less than $250 online.

Serrano, a software engineer, grew up playing soccer in Quito, Ecuador, and he has kept up the sport since moving to the United States two decades ago.

He hobbled off the field and iced his knee. But the pain was so severe that he made an appointment with Rothman Orthopaedic Institute, a network of orthopedists practicing in Greater Philadelphia, New Jersey and New York.

The doctor diagnosed a strain of the medial collateral ligament and prescribed over-the-counter pain medication as well as a hinged knee brace, which Serrano used for several weeks until he'd healed.

He expected his insurance to cover his treatment. A plan from a previous job had covered him when he needed surgery to fix a broken nose sustained in another soccer game in 2017.

Patient: Esteban Serrano, 41, a software engineer and father of two from Phoenixville, Pa., outside Philadelphia.

Medical service: A doctor examined Serrano's knee and sent him for an X-ray. The doctor said he should use a knee brace for four weeks and recommended a hinged one sold through the practice.

What gives: A medial collateral ligament injury is a common knee injury occurring frequently among participants in contact sports. According to the American Academy of Physical Medicine and Rehabilitation, the medial collateral ligament is involved in at least 42 percent of knee ligament injuries. Although most cases are sports related, such injuries can also result from everyday activities like tripping on stairs.

"The doctor told me that he thought I didn't have damage, that it was more of an inflammation, but he ordered an MRI just to make sure," said Serrano. (The MRI, performed at a later date, confirmed that suspicion.)

Serrano said the brace did ease the discomfort and stabilized his knee as it healed. However, the bill was almost more painful — he owed the orthopedic practice $829.41. 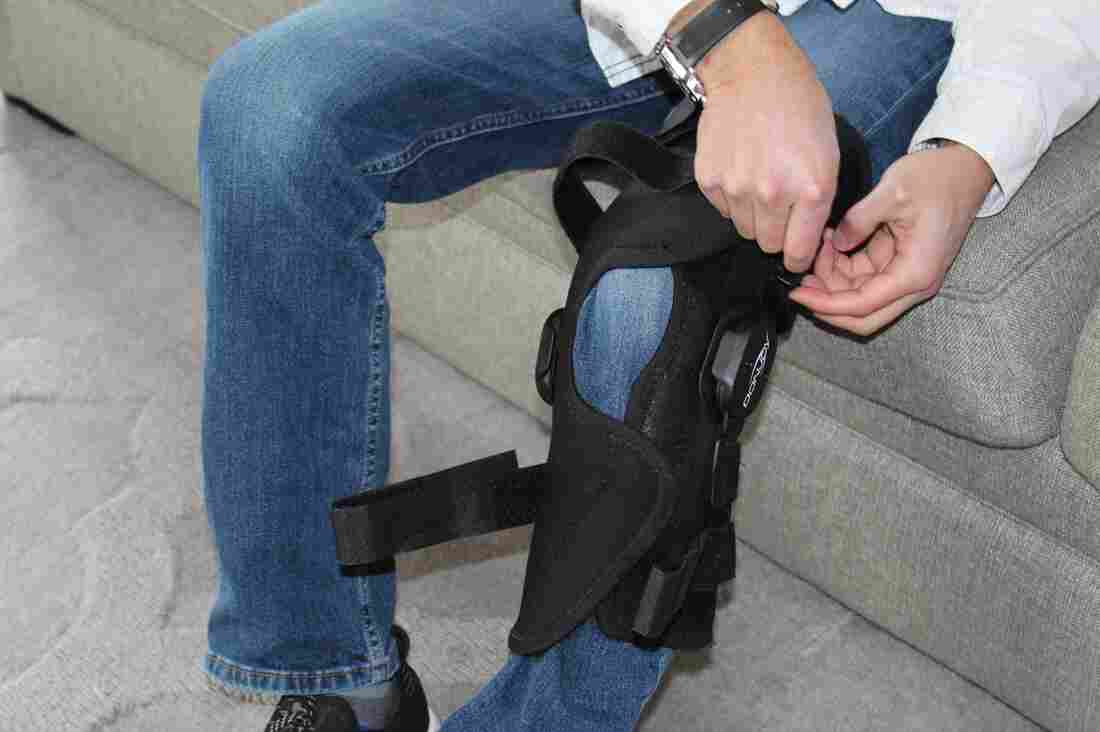 Serrano, a software engineer, grew up playing soccer in Quito, Ecuador. After straining a medial collateral ligament, he got a brace to help it heal. Paula Andalo/Kaiser Health News hide caption 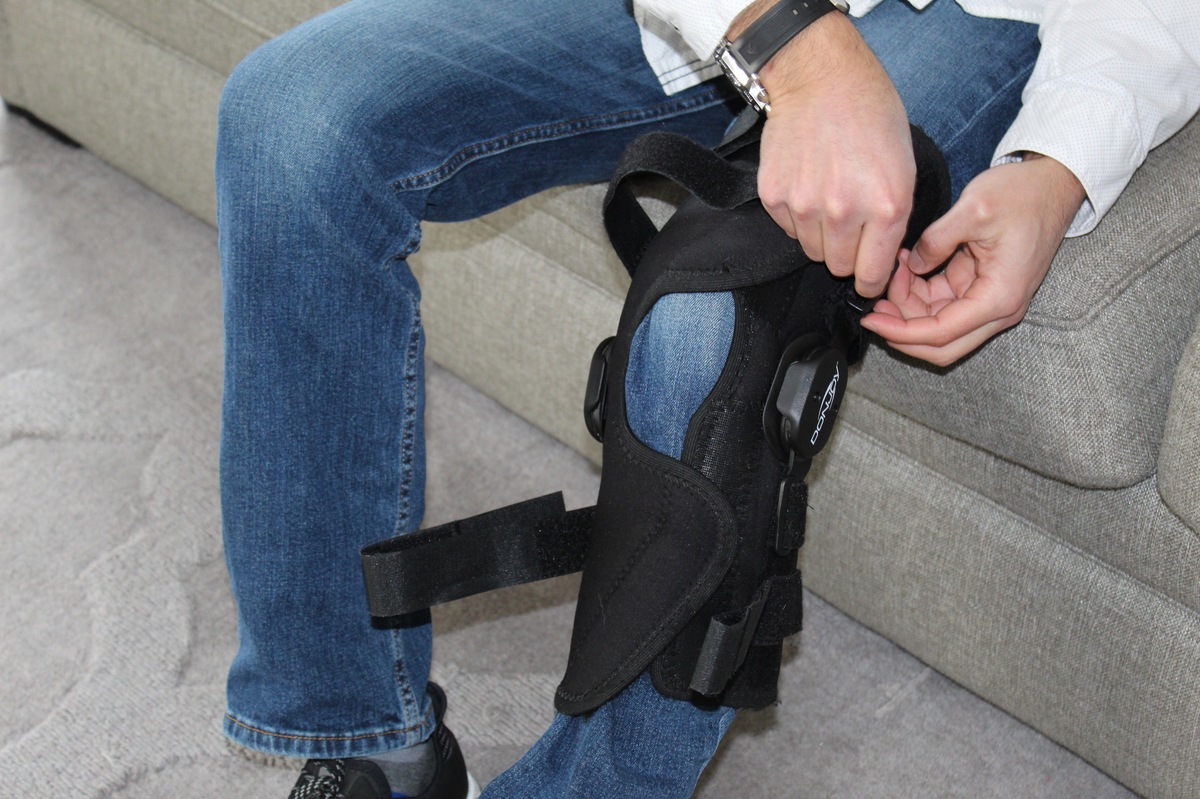 Serrano, a software engineer, grew up playing soccer in Quito, Ecuador. After straining a medial collateral ligament, he got a brace to help it heal.

The bill came close to Christmas, when Serrano's 12-year-old daughter wanted her first iPhone. "I told her, 'Sorry, honey, but I already paid a price of an iPhone for the hinged knee brace,' " Serrano joked.

Serrano emphasized that he felt lucky to have the money to handle a bill that for many people could equal a month's rent or three months of groceries.

Knee braces fall into a category of products called "durable medical equipment," whose prices can vary widely. Items range from slings and braces to wheelchairs and commodes. They also include glucose meters and breast pumps for new mothers.

Doctors and hospitals that dispense such equipment for patients to take home almost always bill for them and add hefty markups that can catch patients unaware.

Braces and other products "are often marked up two or three times what the cost is, and unfortunately, that is the standard practice," said Dr. Matthew Matava, an orthopedic surgeon and chief of sports medicine for Washington University Physicians in St. Louis.

The type of hinged knee brace Serrano bought was a DonJoy Playmaker. DonJoy is one of the nation's largest producers of braces. A customer service representative for the company said it charges a retail price of $242.51 for the model that Serrano got. Serrano paid more than three times that price.

It is not even clear that such an elaborate knee brace was needed for Serrano's injury.

Dr. Elizabeth Matzkin, chief of women's sports medicine at Brigham and Women's Hospital in Boston and an assistant professor at Harvard Medical School, said that while it is helpful to give patients some kind of knee brace for support after medial collateral ligament injuries, the use of a hinged knee brace does not influence recovery, according to studies. She called hinged braces "luxury products." Simpler, cheaper braces also offer support.

Resolution: Serrano recalled that when he received the brace, an employee showed him a form with its estimated cost in writing. He remembered his share was more than $700, but he didn't pay too much attention because he assumed his insurance would cover it.

After receiving the bill, he made several phone calls to the doctor's practice to get a copy of the form he'd signed. It stated that the product could be returned within seven days. A month had already passed. Because he had not met his deductible, his $829.41 balance was even more than the estimate.

The takeaway: These days, many types of equipment dispensed by doctors' offices or hospitals involve a charge. Don't assume generosity. Ask the doctor to identify precisely what you need and explain why you need it.

When a doctor or hospital offers you a piece of equipment to help your healing, decide if you really need it or will use it. Say no if you won't. Ask if you will be billed for it and how much.

Many items can be purchased at a fraction of the cost online or from a pharmacy just down the block.

Know your insurance plan's copay or coinsurance for medical equipment (often 20 percent). The cost of purchasing the equipment yourself online may well be less than if you purchase through a medical office.