Accessibility links
VIDEO: Secrets Of Head Lice, And How To Beat Them : Shots - Health News Claws of the louse that afflicts human scalps fit neatly around a single human hair. Louse eggs stick to hair shafts with a sort of glue. Maybe the best remedy for you and the kids? Comb, baby, comb.

At the end of spring break, your kids might be bringing back something more than just good memories of that family vacation. Holidays, it turns out, are a time when head lice spread.

Any time kids' noggins are in direct contact with each other, or when parents and children spend time cuddling, lice have a chance to crawl from one head to the next.

Melissa Shilliday, who owns two NitPixies hair salons in Northern California, says she often sees an uptick in her lice-combing business after holidays or when popular movies for children come out in theaters. At the salons, for $115 per person, a technician will comb lice out of the client's hair with a special metal comb that has closely spaced, narrow teeth and then follow that up with a treatment of certain oils from plants.

"It's always slow a couple of weeks before a Pixar movie comes out," Shilliday notes.

Head lice on humans can move only by crawling on hair. They glue their eggs to individual strands, close to the scalp, where the heat helps them hatch. They tend to feed on blood several times a day. And although head lice can spread by laying their eggs in sports helmets and baseball caps, the main way they get around is by crawling from one head to another — using relatively large, scythe-shaped claws. 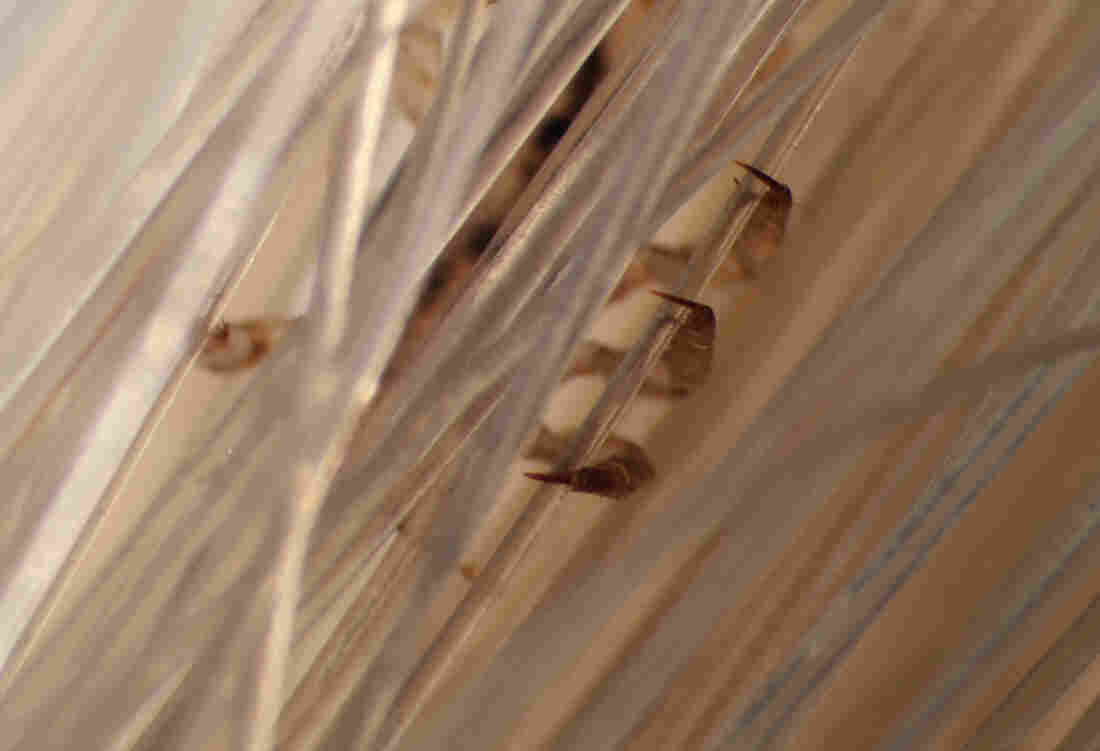 A head louse hides among blond human hairs. The insect's grip is firm, thanks to large tarsal claws that enable it to scamper quickly from one hair to the next. Josh Cassidy/KQED hide caption 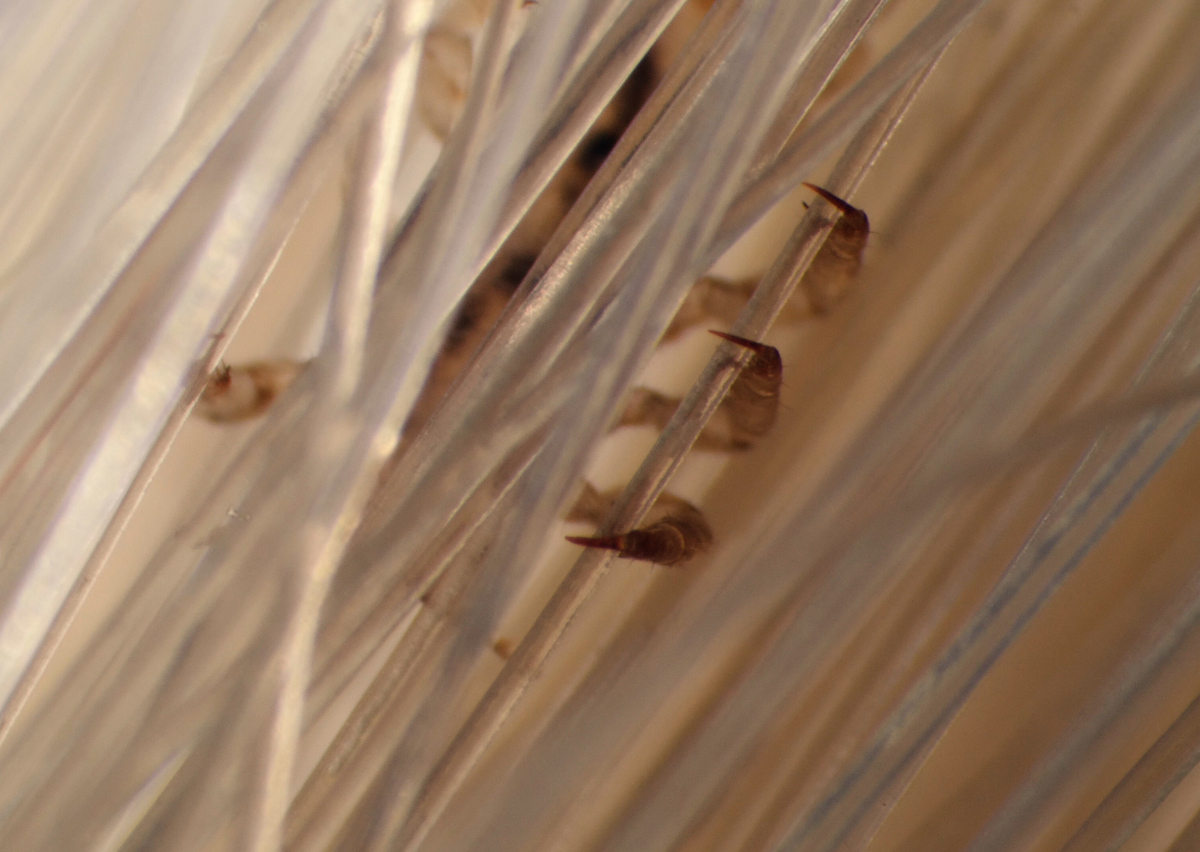 A head louse hides among blond human hairs. The insect's grip is firm, thanks to large tarsal claws that enable it to scamper quickly from one hair to the next.

Each claw works in unison with a small and spiky, thumblike part called a spine. With a claw and spine at the end of each of its six legs, a louse is able to tightly grasp a hair strand, or quickly crawl from hair to hair like a speedy acrobat.

The insect's drive to stay on a human head is strong; once it's off the scalp and loses access to a blood meal, it will starve and die within 15 to 24 hours.

Lice that live on other primates and birds are all very different looking and have adapted to their unique circumstances, surviving in their host's hair or feathers. For example, lice that live in pigeon feathers are long and thin, the better to hide in the feathers' barbs, where preening birds can't get to them. On humans and other primates, lice claws have evolved to fit neatly around a single strand of hair.

"The curvature of it is probably pretty close to the average hair diameter that they would come in contact with for a given species of host," says biologist David Reed, who has studied lice and evolution at the Florida Museum of Natural History.

The good news is that human head lice can't really move to other parts of our body or onto our pets. They're confined to the head. 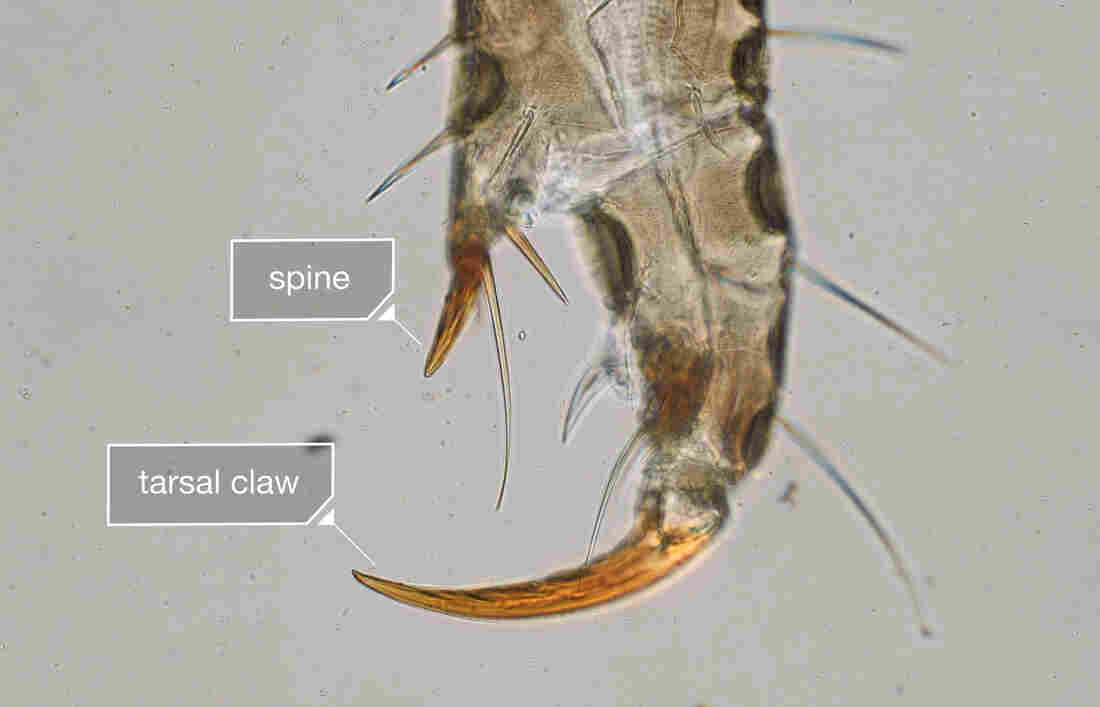 At the end of each of its six legs, a head louse has a tarsal claw and a spine, giving it a grip that neatly fits the diameter of a human hair. Josh Cassidy/KQED hide caption 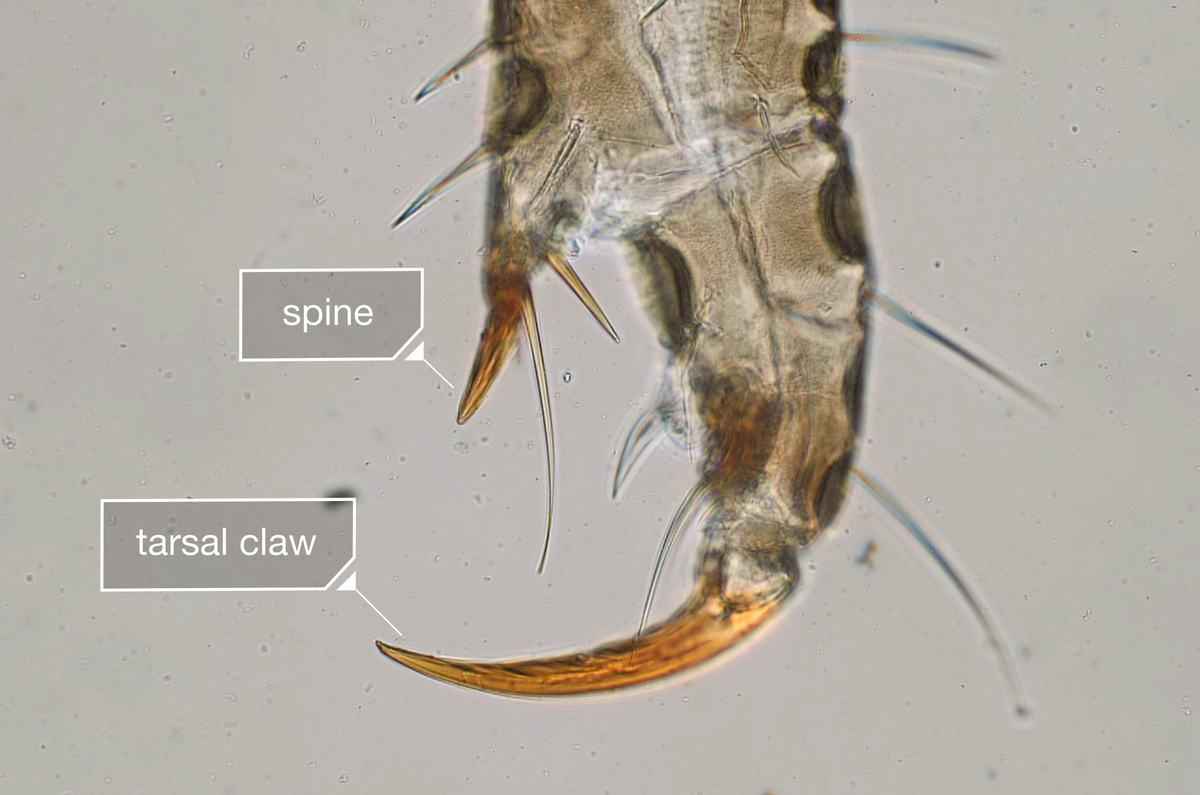 At the end of each of its six legs, a head louse has a tarsal claw and a spine, giving it a grip that neatly fits the diameter of a human hair.

"The claw and spine are adapted to hold [onto] a human hair on the scalp," says medical entomologist Kosta Mumcuoglu, who studies lice at the Hebrew University of Jerusalem. "The other hairs of the body are usually too thick for them," he says, "and they can't hold them."

However, two other types of lice can live elsewhere on the human body: the clothing louse, which lives in the clothes of people who can't change them often enough, and the pubic louse, which spreads during sexual contact.

"[The pubic louse] has stronger claws," Mumcuoglu notes, "to catch the thicker hairs of that region."

Between 2013 and 2015, John Clark and colleagues at the University of Massachusetts Amherst tested head lice in every state except West Virginia and Alaska. They found that the insects had become overwhelmingly resistant to the chemicals used in the most common over-the-counter lice treatments: natural insecticides called pyrethrins and the analogous synthetic versions, pyrethroids. 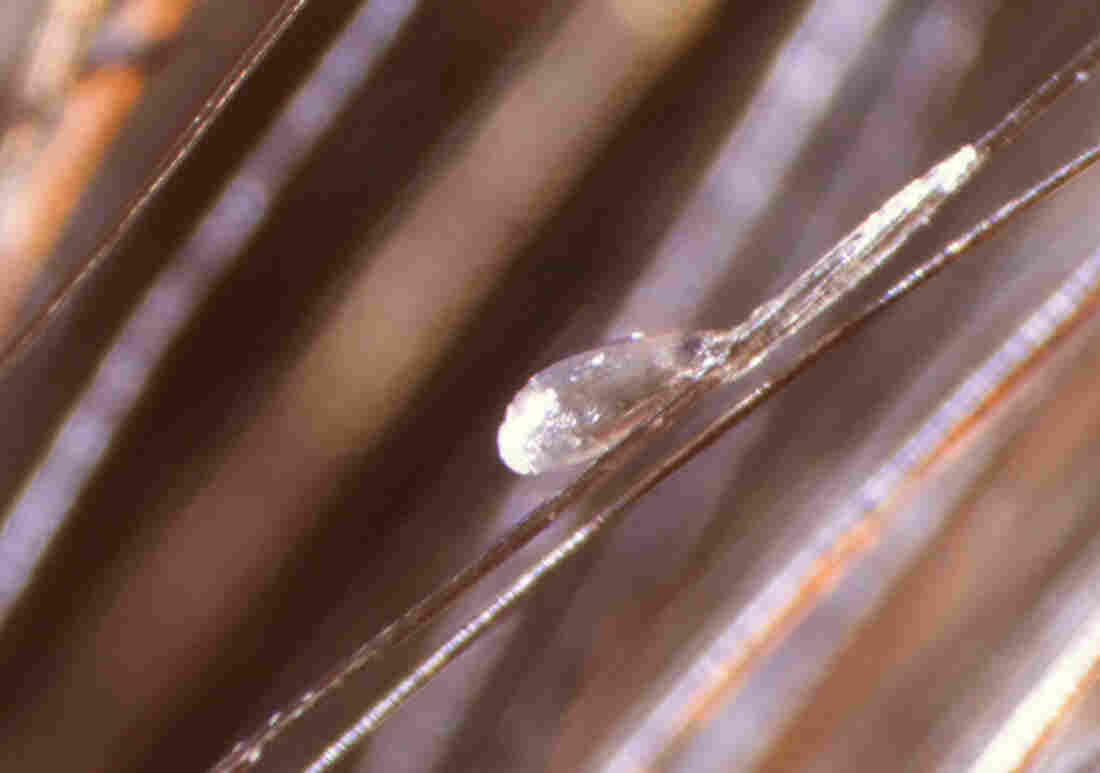 The egg of a head louse is attached to a single hair strand with a glue made out of hard protein. Josh Cassidy/KQED hide caption 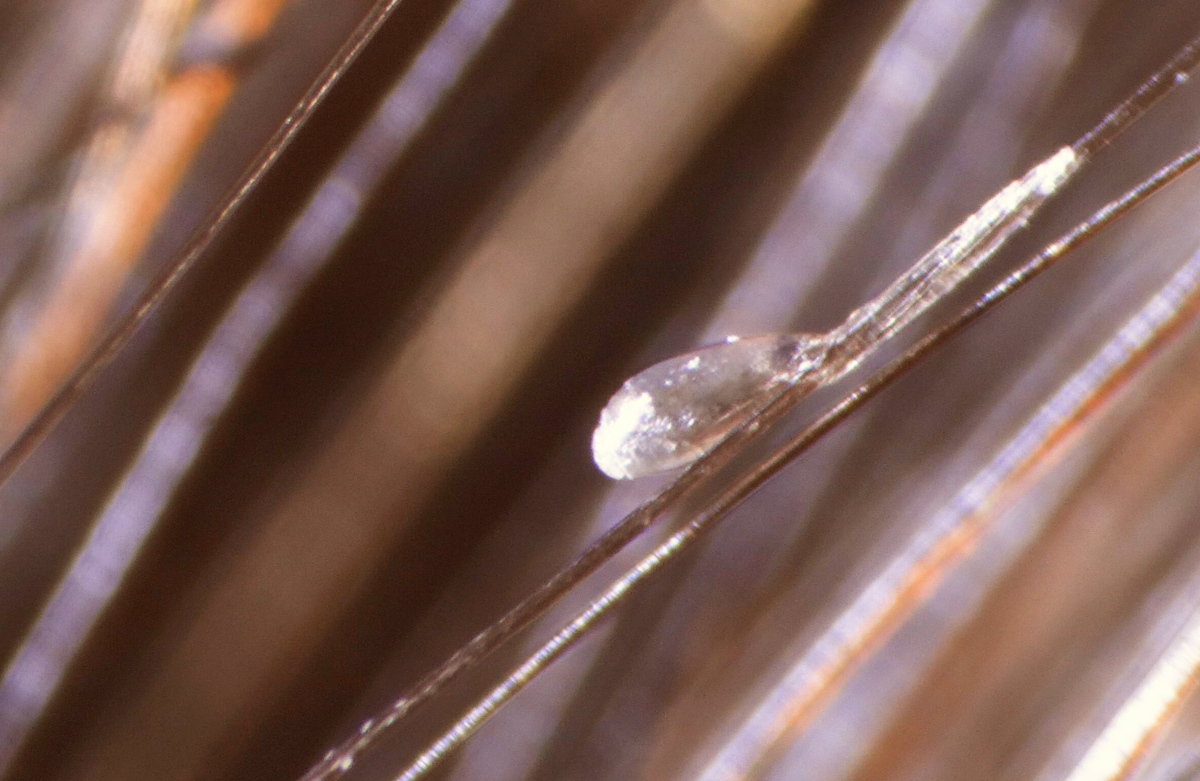 The egg of a head louse is attached to a single hair strand with a glue made out of hard protein.

However, other products do still work against lice, Clark says. Prescription treatments that contain the insecticides ivermectin and spinosad are effective louse killers — they're useful against louse eggs, as well as the adult insects. And treatments that work as suffocants — blocking the lice's breathing holes — and hot-air devices that desiccate the lice also work. Tea tree oil can work both as a repellent and a "pretty good" insecticide, Clark adds. And then there's combing, which can be surprisingly effective.

"It takes time and effort," he says. "You sort of have to know what you're doing. And so most people that comb eventually get tired of it and they want something a little bit more simplistic."

Carefully combing every inch of hair from scalp to tip to remove lice eggs as well as adult insects is, indeed, a laborious, old-fashioned process that has become the last resort for many parents, as lice have become resistant to over-the-counter insecticide shampoos.

NitPixies advises the parents of its clients to continue to use the metal comb on their kids daily for at least five days after treatment to remove any remaining eggs. It generally takes eggs six to nine days to hatch.

This post and video were produced by our friends at Deep Look, a wildlife video series from KQED and PBS Digital Studios that explores "the unseen at the very edge of our visible world." KQED's Gabriela Quirós is the coordinating producer of the series.