Accessibility links
For Anxious Kids, Parents May Need To Learn To Let Them Face Their Fears : Shots - Health News For some kids with anxiety disorders, a new study suggests the best treatment might be teaching their parents new parenting skills. 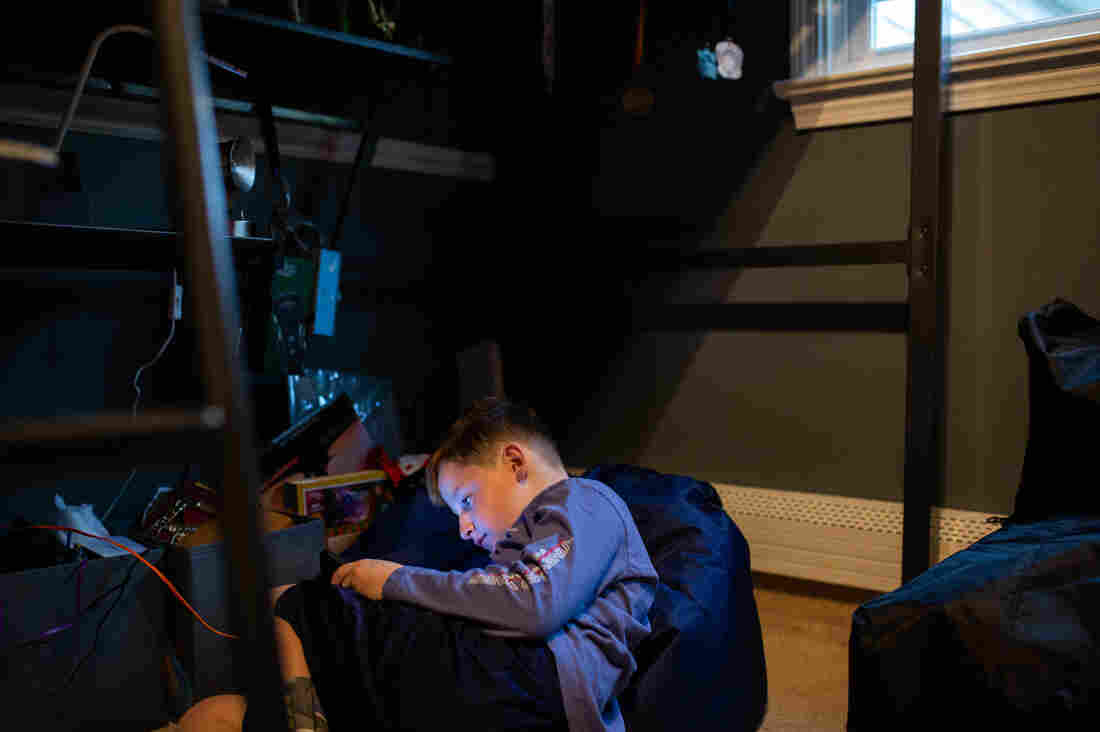 Joseph Calise, 9, plays on his iPad in his bedroom. Joseph used to get anxious whenever he was alone, even when taking a shower or at bedtime, so his parents, Jessica and Chris Calise, learned new parenting skills from the Yale Child Study Center. Christopher Capozziello for NPR hide caption 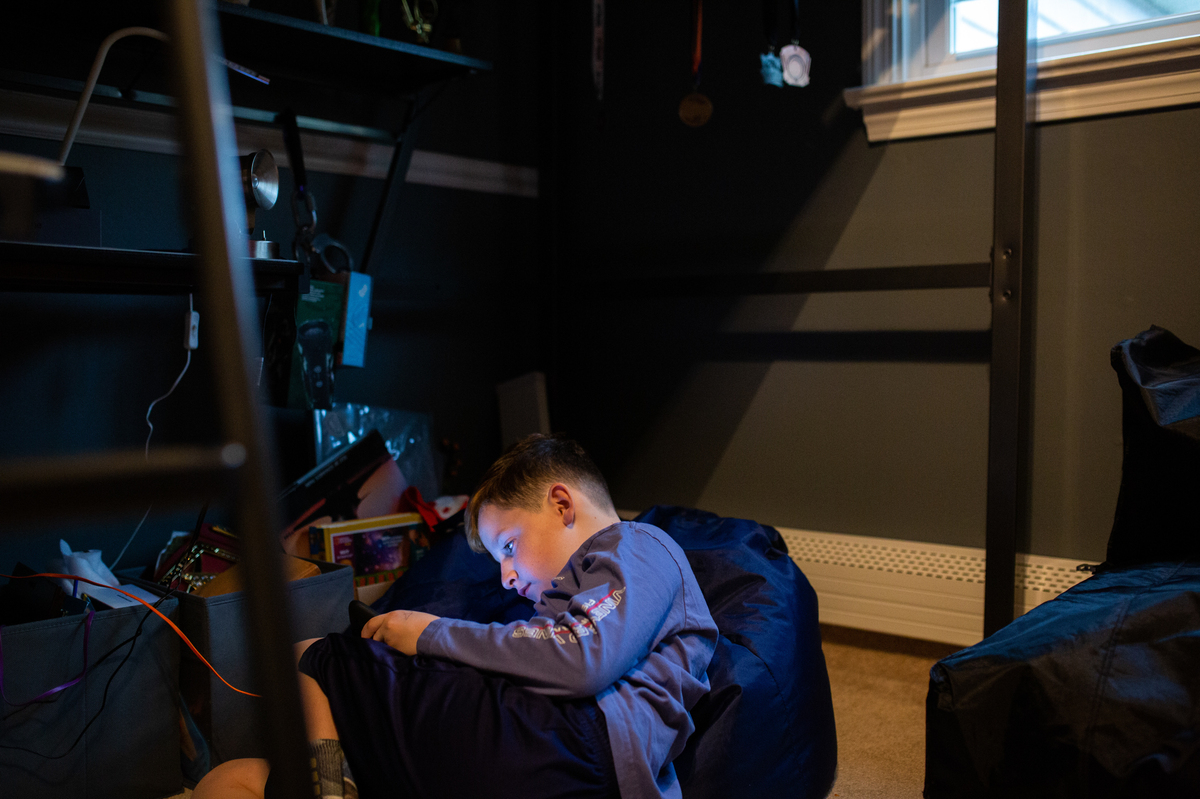 Joseph Calise, 9, plays on his iPad in his bedroom. Joseph used to get anxious whenever he was alone, even when taking a shower or at bedtime, so his parents, Jessica and Chris Calise, learned new parenting skills from the Yale Child Study Center.

The first time Jessica Calise can remember her 9-year-old son Joseph's anxiety spiking was about a year ago, when he had to perform at a school concert. He said his stomach hurt and he might throw up. "We spent the whole performance in the bathroom," she recalls.

After that, Joseph struggled whenever he had to do something alone, like showering or sleeping in his bedroom. He would beg his parents to sit outside the bathroom door or let him sleep in their bed. "It's heartbreaking to see your child so upset and feel like he's going to throw up because he's nervous about something that, in my mind, is no big deal," Jessica says.

Jessica decided to enroll in an experimental program, one that was very different from other therapy for childhood anxiety that she knew about. It wasn't Joseph who would be seeing a therapist every week — it would be her.

The program was part of a Yale University study that treated children's anxiety by teaching their parents new ways of responding to it.

"The parent's own responses are a core and integral part of childhood anxiety," says Eli Lebowitz, a psychologist at the Yale School of Medicine who developed the training.

For instance, when Joseph would get scared about sleeping alone, Jessica and her husband, Chris Calise, did what he asked and comforted him. "In my mind, I was doing the right thing," she says. "I would say, 'I'm right outside the door' or 'Come sleep in my bed.' I'd do whatever I could to make him feel not anxious or worried."

But this comforting — something psychologists call accommodation — can actually be counterproductive for children with anxiety disorders, Lebowitz says.

Empowering Kids In An Anxious World

"These accommodations lead to worse anxiety in their child, rather than less anxiety," he says. That's because the child is always relying on the parents, he explains, so kids never learn to deal with stressful situations on their own and never learn they have the ability to cope with these moments.

"When you provide a lot of accommodation, the unspoken message is, 'You can't do this, so I'm going to help you,' " he says.

Lebowitz wondered if it would help to train parents to change that message and to encourage their children to face anxieties rather than flee from them.

Currently the established treatment for childhood anxiety is cognitive behavioral therapy delivered directly to the child.

When researchers have tried to involve parents in their child's therapy in the past, the outcomes from studies suggested that training parents in cognitive behavioral therapy didn't make much of a difference for the child's recovery. Lebowitz says that this might be because cognitive behavioral therapy asks the child to change their behavior. "When you ask the parents to change their child's behavior, you are setting them up for a very difficult interaction," he says.

Instead, Lebowitz's research explores whether training only the parents without including direct child therapy can help. He is running experiments to compare cognitive behavioral therapy for the child with parent-only training. A study of the approach appeared in the Journal of the American Academy of Child & Adolescent Psychiatry last month.

Jessica Calise received 12 weeks of Lebowitz's parent training as part of a follow-up study, the results of which are not yet published. 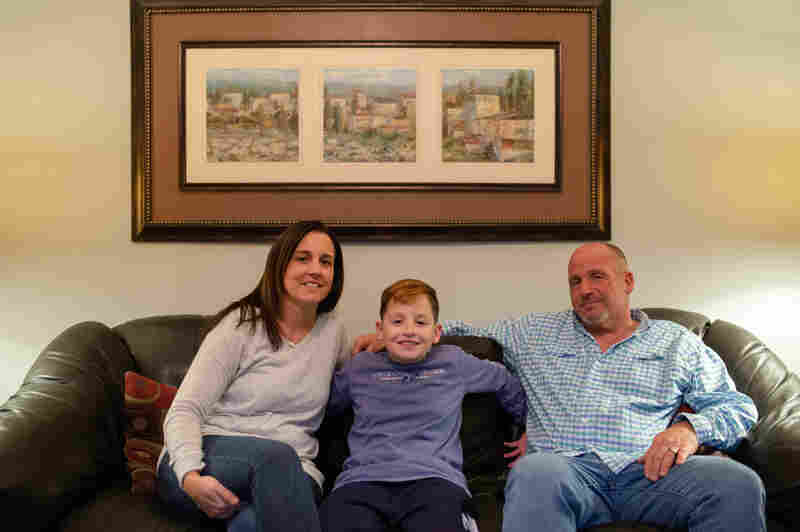 Jessica and Chris Calise sit in their living room with their son, Joseph Calise. Christopher Capozziello for NPR hide caption 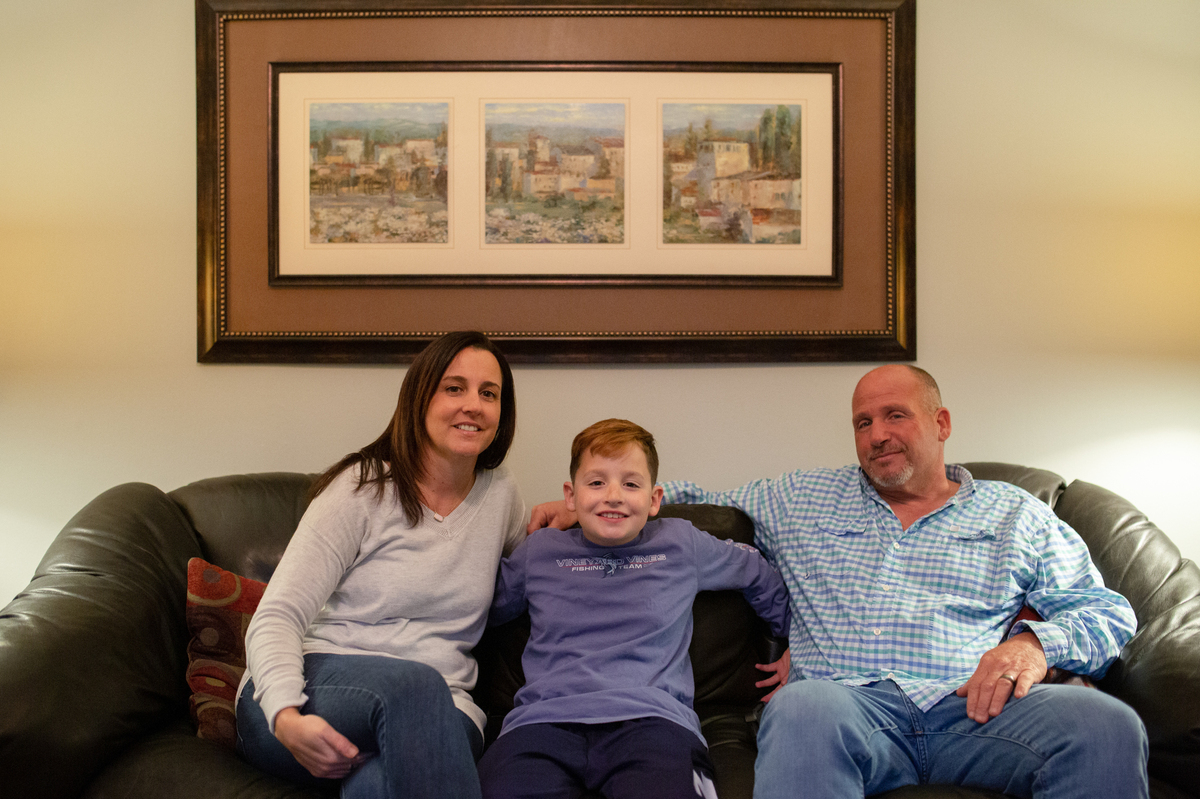 Jessica and Chris Calise sit in their living room with their son, Joseph Calise.

Once a week, she drove from Norwalk, Conn., to Yale University for an hourlong session with a therapist. Like all the parents who went through Lebowitz's training program, Jessica began forming a plan with the therapist on how she and her husband would stop swooping in when Joseph became anxious.

The key to doing that, Lebowitz says, is to make children feel heard and loved, while using supportive statements to build their confidence. Parents need to "show their child that they understand how terrible it is to feel anxious," he says. They need to accept that their child is "genuinely anxious and not just being attention seeking," he adds.

The next step is to tell children that "they can tolerate that anxiety and they don't need to be rescued from it." This helps give them the strength to face their fears, Lebowitz says.

This approach was hard at first, says Joseph's father, Chris Calise. He's a construction equipment operator, roughly 6 feet tall, with a frame as solid as brick. "The hardest hump for me was the way I was brought up," he says, rapping his fingers against the kitchen table. "I always thought the way you do things [is to say], 'Get over it. You're fine. Suck it up.' But it was obvious what we were doing wasn't working."

So, the parents committed themselves to a plan to get Joseph to feel comfortable sleeping and showering alone.

"It was baby steps first. I'd say, 'I'm not going to stay [outside the bathroom], but I'll come back and check on you in five minutes,' " Jessica says. "Then I would say, 'I know it's scary for you, but I know that you can do it. You're going to do great.' Just acknowledging the anxiety and providing the reinforcing statement."

It was slow at first, Jessica says. But each time, as she'd been trained, Jessica would praise Joseph when he managed to pass the time on his own. "[We'd] say like, 'Wow, you're a rock star! You were nervous and scared, but you did it, and you can do it,' " she says.

And, slowly, Joseph started to spend longer amounts of time by himself, eventually sleeping on his own all night. "It was about halfway through when you really started noticing big differences," Chris recalls. "He was becoming more confident. He just did things on his own without us having to ask or tell him."

Many parents in Lebowitz's recently published study had a similar experience. Nearly 70 percent of the 64 children who were assigned to the parent-training arm of the experiment had no anxiety by the end of the study.

"It is amazing. It is really exciting. These children had never met a therapist and were as likely to be cured of their anxiety disorder as the children who had 12 sessions of the best therapy available," Lebowitz says of the results of his recently published study.

The parent training seems to work because it lets children confront their anxieties while parents provide love and support from afar, says Anne Marie Albano, a psychologist at Columbia University who did not work on the study.

"You coach the child a bit but don't take over. It's helping the child stumble into their own way of coping and ride whatever wave of anxiety they're having," she says. "That ultimately builds their confidence." 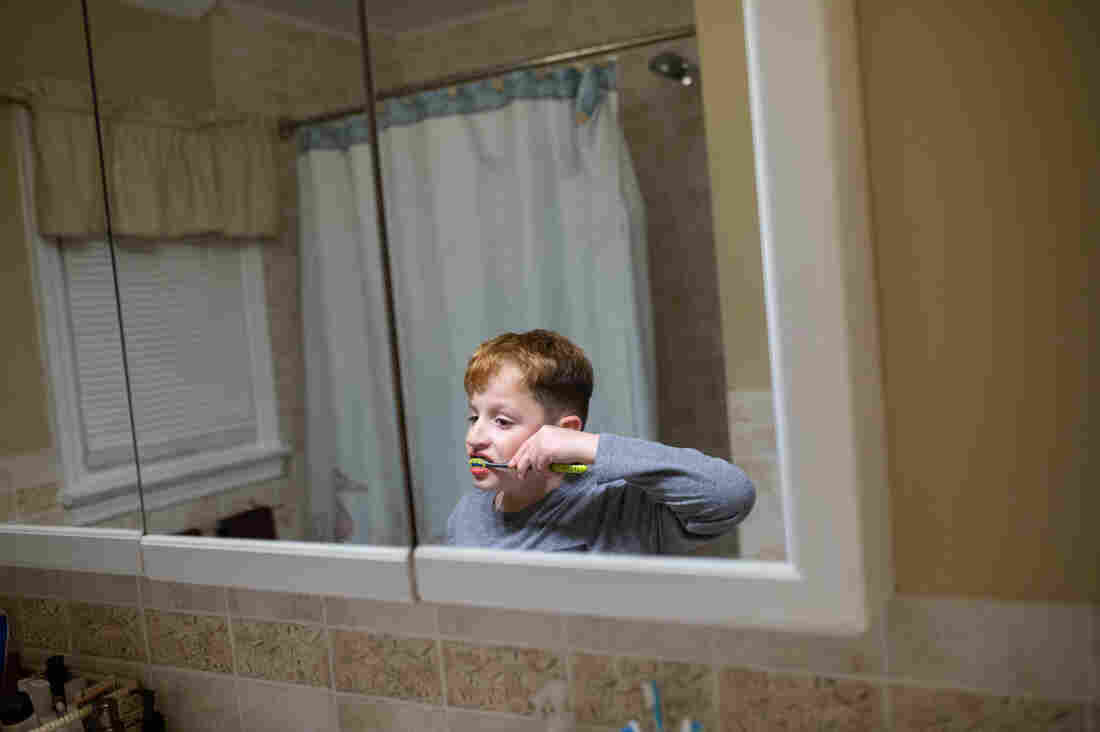 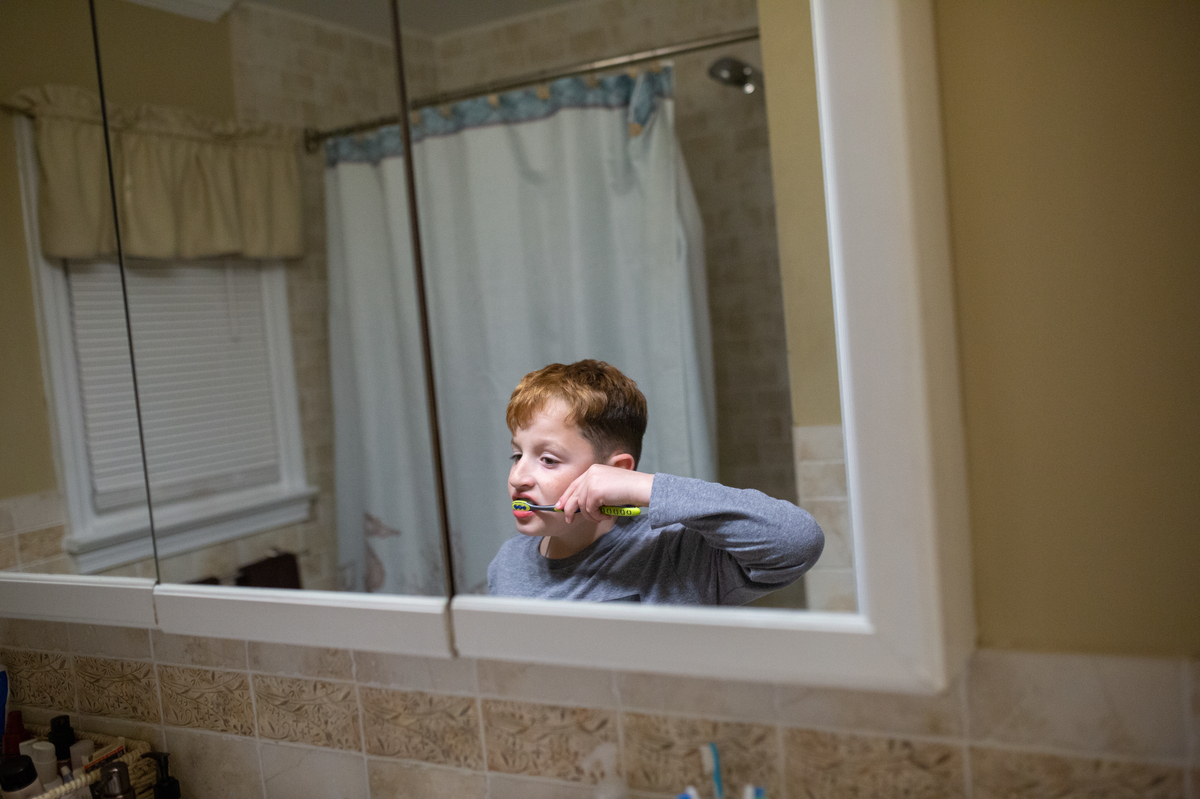 Joseph brushes his teeth before bedtime.

That suggests this parent training has a lot of potential to advance childhood anxiety treatment, Albano says. "It is preliminary, but this paper is very exciting to me as someone who worked for 30 years in this field," she says. "This treatment brings in the parents, finally, and focuses on the ways parents need [to stop] taking over, to break the cycle of anxiety in kids."

Lebowitz's parent training is theoretically similar to traditional therapy, says Muniya Khanna, a psychologist at Children's Hospital of Philadelphia and director of the OCD & Anxiety Institute in Philadelphia, who was not involved with the work. "But, this gets at it from a different angle," she says. "It targets lifestyle change and says, yes, if you change lifestyle and family life, it can have almost the same effect as changing the child's theoretical understanding about [anxiety]."

Khanna thinks that combining this parent program with traditional therapy might yield even better results, particularly for children who haven't responded to behavioral therapy alone. "It's encouraging for families where kids may not be developmentally or emotionally ready to take on cognitive behavioral therapy," she says.

The study leaves many unanswered questions, Albano adds. "This is only a short-term outcome. We need to follow up [with] the kids at six months, 12 months, even several years," she says. Not only does it remain to be seen if the benefits from the parent training persist as the child gets older, but more research will also need to be done to see if the same techniques will continue to work as children age into teenagers. 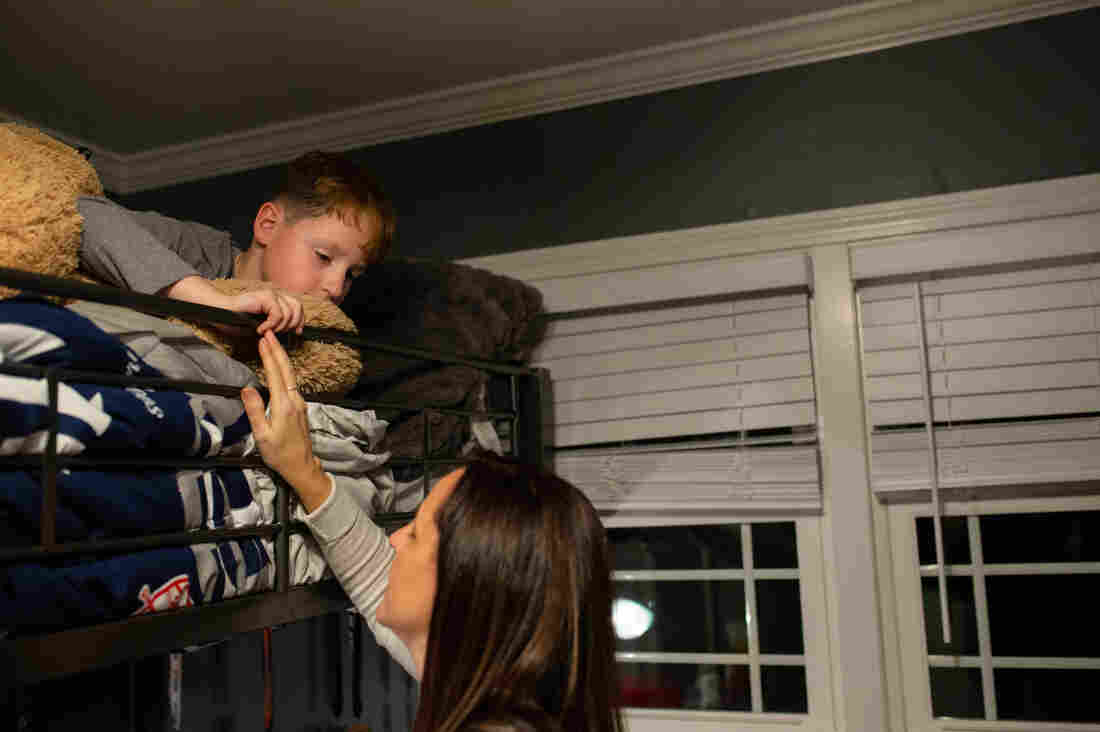 Jessica Calise checks on Joseph as he gets ready for bed. Joseph used to be afraid to sleep alone, but he has learned to be OK with it since his mother learned new parenting approaches. Christopher Capozziello for NPR hide caption 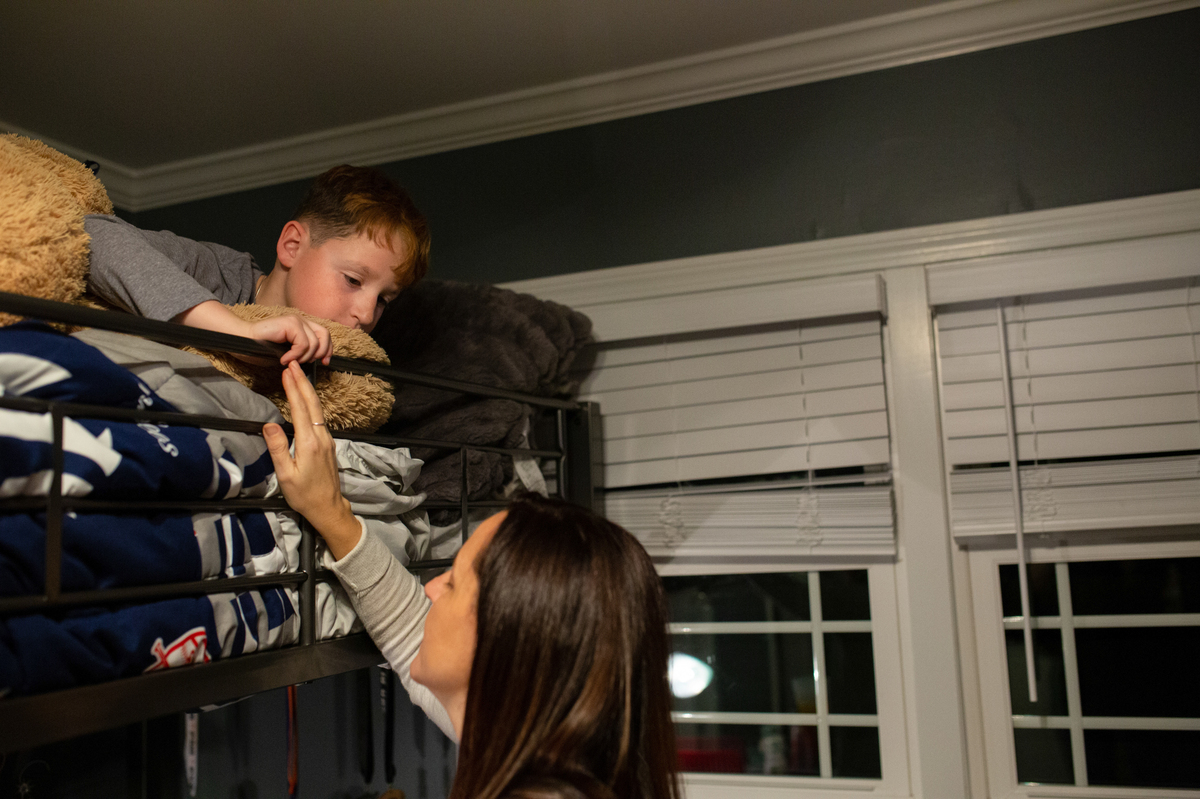 Jessica Calise checks on Joseph as he gets ready for bed. Joseph used to be afraid to sleep alone, but he has learned to be OK with it since his mother learned new parenting approaches.

Jessica and Chris Calise say that they even use the techniques they learned through the parent-training program with Joseph's twin sister and older brother, Isabella and Nicholas. "It's important to validate your kids' feelings and show them that we care," Jessica says. "I think this taught us to communicate better. I think it made us better parents, quite honestly."

Joseph says he no longer feels anxiety about being alone. He doesn't enjoy it, "but I'm OK with it," he says. He has learned to banish the frightening thoughts that would come when he was by himself and that kept him up at night. "If I get a nightmare, I just change the subject to something happy," he says. "Then I'm fine."

New fears come up from time to time — like a recently discovered fear of heights. But with his parents' support, Joseph says, he's learning to face these too. "I think I'll be OK," he says. "I'll just try to do it."