Accessibility links
Can The Culture Of Overtreatment Be Curbed In Medical Training? : Shots - Health News Ordering more tests or treatments is not always best for patients' health or wallet. A group of medical educators is trying to address the problem where they think it starts: medical training. 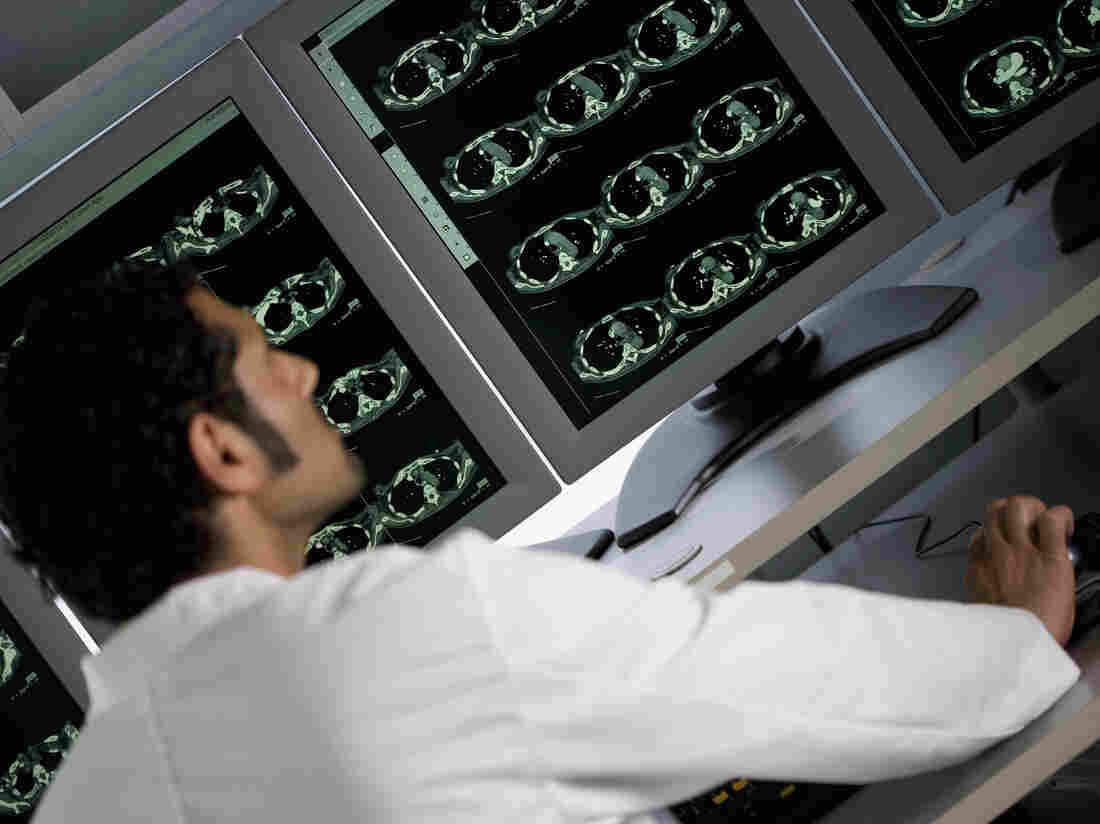 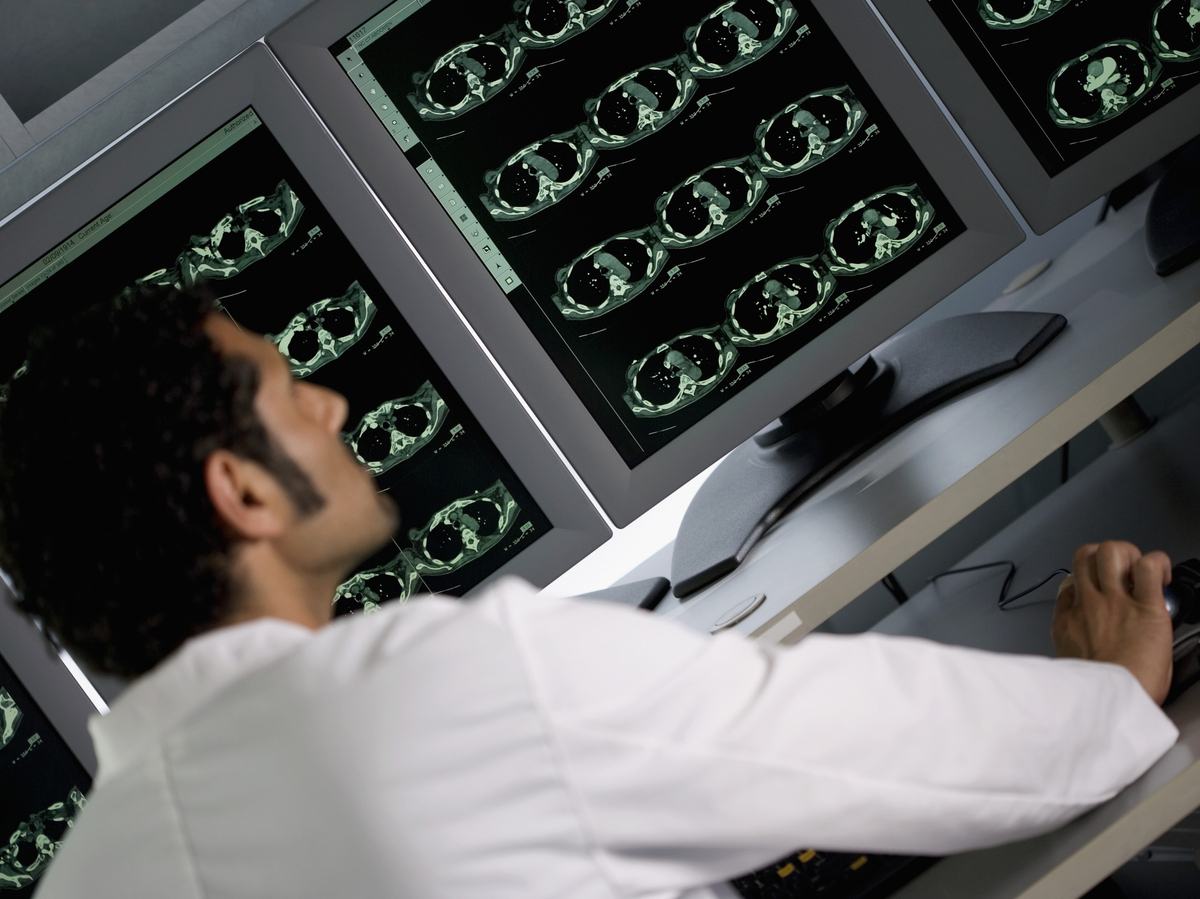 The habit of ordering unneeded tests and treatments drives up medical costs. It's a pattern doctors often learn in medical school and residency.

When family physician Jenna Fox signed on for a yearlong advanced obstetrics fellowship after her residency to learn to deliver babies, she knew she'd need to practice as many cesarean sections as possible.

The problem was, she also knew C-sections aren't always good for patients. Many women's health experts argue they're often unnecessary and increase health risks for mom and baby. Doctors are working to decrease high C-section rates in hospitals around the country. Fox and her colleagues on the labor and delivery floor at the University of Rochester try hard to prevent them, particularly primary C-sections, when a woman needs one for her first baby.

During her fellowship, she says, the more C-sections she does, the better prepared she'll be to practice independently.

Medical education is built on the assumption that the more procedures or treatments doctors see and do, the more competent they'll be when they're independent. It can feel tempting to do more rather than less.

But excessive medical tests and treatments can have financial and personal costs. They contribute to this country's rising health care spending and subject patients to anxiety and the risks of extraneous procedures. A group of medical educators thinks this epidemic of overtreatment, as they call it, starts with the habits that doctors develop during training — habits they're hoping to break with new approaches to medical education.

There's some evidence that the patterns we learn in residency are hardwired for the rest of our careers. In a 2014 JAMA study, for example, doctors who trained in regions where patients underwent more tests and procedures went on to practice independently in a similarly aggressive style.

Academic medicine is often criticized for its emphasis on an overly thorough workup for ordinary problems. In the name of learning how to practice medicine, young physicians may be tempted to order lots of tests, a trial-and-error approach with real implications for patients.

Early in my own training as a family physician, I remember ordering a colonoscopy for a young man with mild rectal bleeding. I rationalized the risks of the procedure — bowel perforation, complications from anesthesia — because it would put both me and the patient at ease to know his symptoms weren't caused by something dangerous. As Fox puts it: "We like to be reassured. We feel much better when we think a situation is terrible and find that everything is awesome rather than the other way around."

But more isn't always better. It's not news that health care costs in the U.S. are out of control. We spend more on health care, per capita, than any other developed country.

Should You Get That Scan? Your Doctor Might Not Be Great At Helping You Decide

Unnecessary tests and treatments may contribute to high costs. According to a 2010 estimate from the Institute of Medicine (now known as the Health and Medicine Division of the National Academies of Sciences, Engineering, and Medicine), we could reduce many of our medical interventions by 30 percent without sacrificing quality of care.

There can be a disconnect between that abstract fact, however, and deciding how to take care of an individual patient.

"Nobody went to medical school to treat the GDP," says Christopher Moriates, a physician and dean at Dell Medical School in Austin, Texas, who designs medical school curricula to teach appropriate use of tests.

Instead, medical educators are focusing on a different argument in an effort to teach judicious use of tests and treatments: the human costs of overtreatment.

Order enough medical tests, and they'll inevitably yield abnormal results. Doctors then may feel obligated to treat those abnormalities — even if the patient would have lived a healthy life without knowing about them.

"It's totally natural to think more information is just going to be better," says Moriates. "Eventually it leads to patients feeling less well than they actually are, if you uncover things that are meaningless but abnormal."

Take my patient with the rectal bleeding. After my overzealous workup, I talked through his case with a more experienced doctor. He told me what I now know from more clinical experience: The patient's bleeding was almost certainly caused by hemorrhoids, and watching and waiting for a few weeks would have been safe and helped the patient avoid an invasive procedure.

Moriates and other medical educators are exploring ways to teach this concept early in medical education, as I was lucky to experience. They want to help medical students and residents curb these habits before they become ingrained.

One area that seems to have some promise? Harnessing doctors' competitive spirit and showing them how they compare to their peers.

Internist and Columbia assistant professor Joshua Geleris published a study in 2018, for example, that examined the sheer number of tests that internal medicine residents ordered during the 2016-2017 academic year at a New York residency program. Geleris and his co-authors didn't distinguish between tests ordered on different types of patients, since all residents spend equal time in intensive care units and regular hospital floors.

What they found, Geleris says, is that some residents ordered seven to eight times more tests than their peers. It's hard to say what number of tests is the right one, Geleris adds, but the variability is concerning.

"They're just trying to get their work done and make sure the attending is happy the next day," he says.

Unnecessary Medical Care: More Common Than You Might Imagine

At Johns Hopkins Hospital in Baltimore, a group of professors is working to provide similar data to their residents in real time, with the hope that it might encourage doctors to think more carefully about what tests are truly necessary.

Johns Hopkins radiologist Pamela Johnson, an associate professor who teaches residents about appropriate use of tests, says she and her colleagues give out personalized reports that show how individual doctors compare to their peers. She's currently studying whether these reports are effective in reducing the number of CT scans ordered to check for blood clots in the lungs. There are clear guidelines for when a CT scan is the right test to check for clots, she says, but they're often ignored, in part, because doctors are afraid of missing a life-threatening diagnosis.

"The best way to avoid a diagnostic error is to avoid an unnecessary test," Johnson says.

This kind of peer pressure may be helpful for fully trained doctors, too.

Internist Adam Cifu, a professor at the Pritzker School of Medicine in Chicago who has written about medical overuse, recalls a meeting several years ago with an infectious disease physician charged with decreasing unnecessary antibiotic use in the hospital. That physician told Cifu he was one of his department's worst offenders when it came to using broad-spectrum antibiotics for ordinary urinary tract infections. Knowing that he was over-treating compared to his colleagues, Cifu says, made him rein in his prescribing almost immediately.

"We're all ridiculously obsessive high achievers," Cifu says. "Seeing that I'm not in the 90th percentile or above kills me."

"We have to break the cycle somewhere," Feldman says.