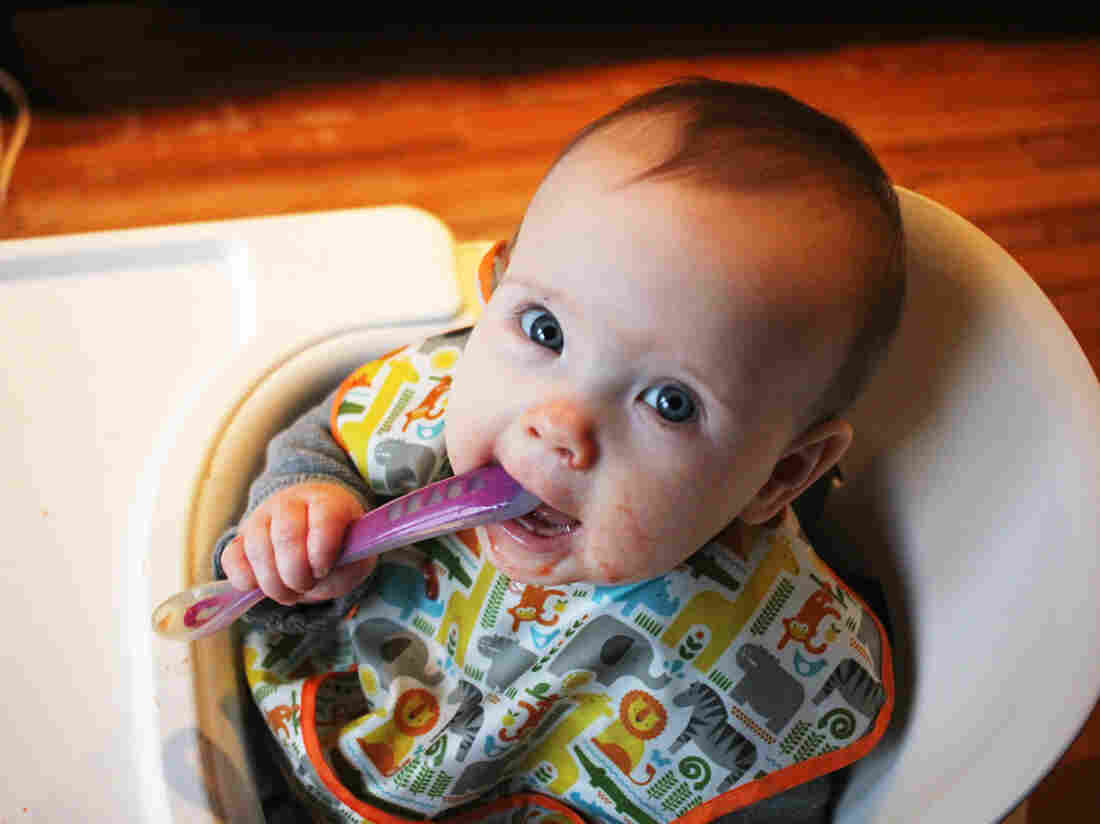 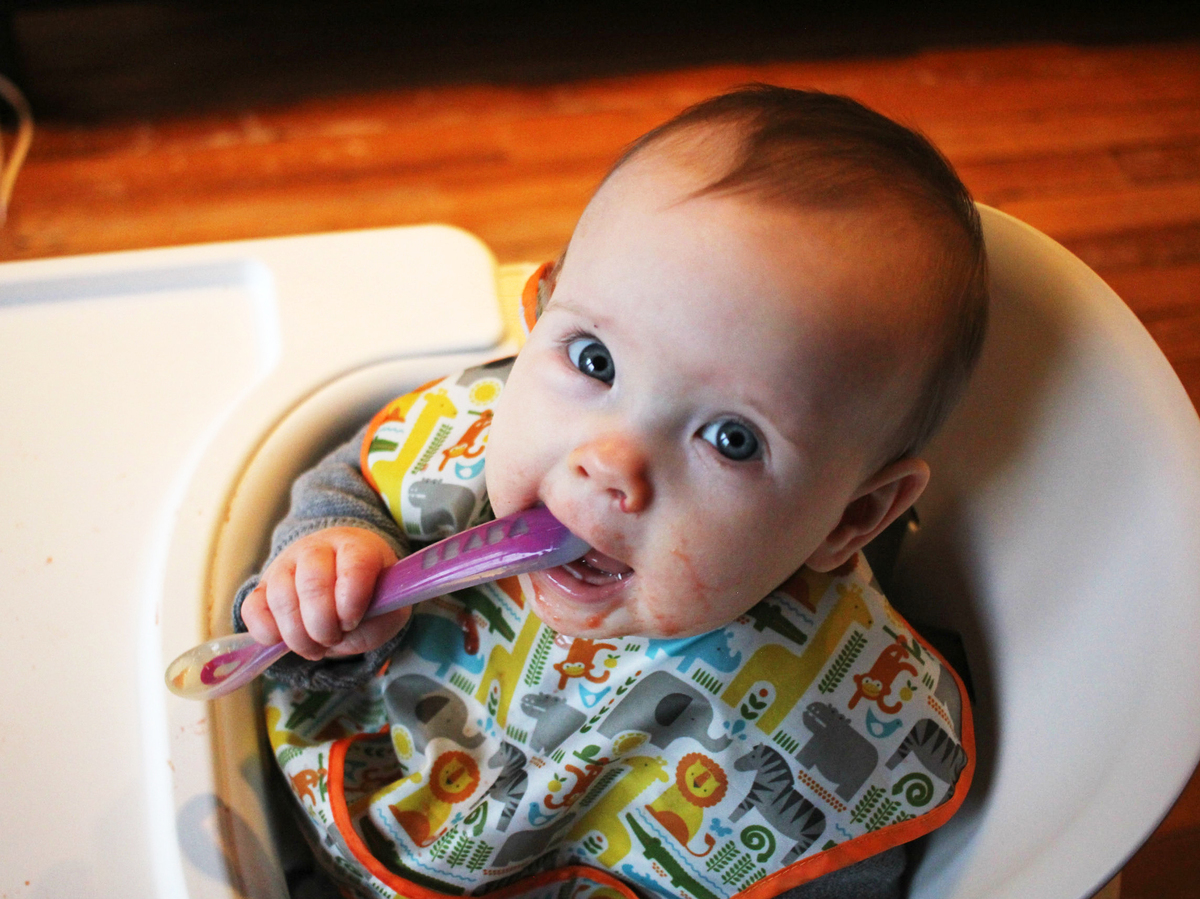 How do you tell the good parenting advice from the bad? When producer Selena Simmons-Duffin's daughter was ready to start solid food, her parents encountered wildly conflicting advice about what to feed her.

At my baby's six-month appointment a few months back, I got a one-pager from the pediatrician titled "Starting Solid Foods."

"It is critical that the baby develop a taste for rice cereal at the beginning, to offset the loss of iron from formula or breast milk," it reads. 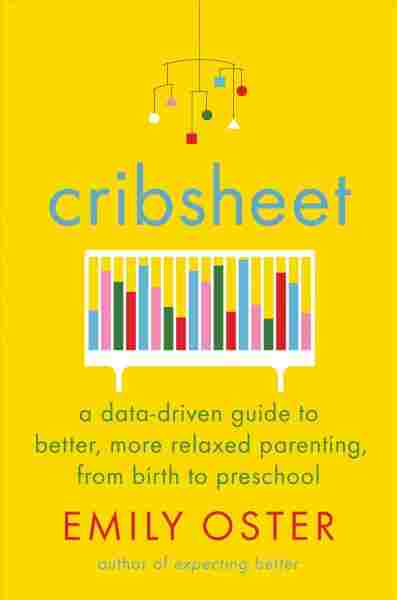 A Data-Driven Guide to Better, More Relaxed Parenting, from Birth to Preschool

Sounds serious. Then come the all caps: "THE FIRST TWO WEEKS OF FEEDING GIVE RICE CEREAL ONLY." That is followed by advice to introduce pureed vegetables before fruits so the baby doesn't develop a sweet tooth.

I obediently went out and bought some sand-textured baby cereal. (Organic, of course.)

"Oh no, we're not doing that." My spouse pointed me to a parenting book we had on the shelf.

"There's no need for cereals alone; they are bland and bulky and their iron benefits are overstated," it reads. "The idea that you should introduce vegetables before fruits to avoid creating a sweet tooth is just an unfounded myth. A carrot has virtually the same amount of sugar as an apple."

Welcome to early parenthood's barrage of contradictory advice. It tends to be detailed, with convincing internal logic. "Studies" are often invoked. And the stakes feel so high — like, if I do this wrong, will my baby be malnourished or end up a picky eater or not succeed in life somehow?

Enter Brown University economics professor Emily Oster and her new book, Cribsheet: A Data-Driven Guide to Better, More Relaxed Parenting, From Birth to Preschool. It's the follow-up to her first book, Expecting Better, a deep look at the data behind pregnancy advice, which has a bit of a cult following. (I am in this cult.)

In her new book, Oster ticks through big and small parenting dilemmas. She uses her training as an economist to look at the relevant research for each of them and to assess how much stock we should put in the findings.

"What I do in the book is actually try to comb through these studies and figure out which of them are giving us the best information," Oster says. "So then you can make these choices having the best information, not just the first thing that comes up when you Google it at 3 o'clock in the morning."

OK, so what about my solid-food dilemma? Yea or nay on rice cereal? Veggies first?

"It turns out there isn't any evidence to suggest that is a particularly important way to introduce foods or not," she says.

The answer to this one: You do you. Keep the food mushy, and don't stress about it too much.

Your Best Parenting Advice: From Meddling Parents To Poop Management

This wasn't my only point of confusion that this book cleared up, even though I'm nearly four years into parenthood. Here are a few of my personal takeaways.

A lot of the other takeaways are kind of nuanced. They don't give you a clear-cut answer, so much as information to help you make your own decision. One reason for that is designing a good study of the risks and benefits of a parenting decision is really hard.

Take, for example, Chapter 4: "Breast Is Best? Breast Is Better? Breast Is About the Same?" Oster provides a path through the maze of conflicting advice by sifting out the convincing studies from the questionable ones.

(It's unclear why that demographic breastfeeds more, Oster says, but the timing for the trend is connected to the public health push away from formula that began in the 1970s.)

Now, let's say you want to find out the impact of breastfeeding — and not of these demographic differences — on things like IQ and obesity.

For the record, she found that there are some health benefits to breastfeeding, but they're more limited than the hype. If it works for you and your family, Oster concludes, great; if not, formula is a good option.

So, even if you've made a decision about how to introduce solids and whether to breastfeed or bottle-feed, there are so many other ones to make! What about baby nap schedules, how to potty train or the financial impact of choosing a nanny versus day care versus staying at home?

As an economist, Oster advocates for taking some of the angst out of it.

When making a parenting decision, she says, "Step one is to kind of really figure out what the best evidence says about the choice." Look for randomized studies and big sample sizes.

"But then there's a really important second step, which is to combine that with what is going to work for your family," she says.

For instance, when she first brought her baby daughter home, she knew the American Academy of Pediatrics recommends that your baby sleep in your room, ideally for the whole first year, as part of its safe infant sleeping environment guidance.

"My husband did one day with our older daughter, and he was like, 'I can't believe it's making those noises.' He just couldn't do it. He wouldn't sleep," she says. Room sharing for a full year was just not workable for her family.

With Cribsheet, Oster is trying to make parents less confused, more confident in their choices and less judgmental of other parents who make different choices. Reading the book makes that feel surprisingly achievable. Laying out the research really strips these decisions of their drama, and you end up wondering why it all felt so overwhelming in the first place.

When the time came to break out the solid foods with my baby, we did mashed sweet potato. A few months into it, emboldened by Oster's book, we've gotten adventurous: This weekend at our Seder, baby even had a bit of brisket smushed up with horseradish.