Accessibility links
Anesthesia Gases Add To Global Warming, But Some Much Less Than Others : Shots - Health News Anesthesia revolutionized surgery by vanquishing patients' pain. But many of the chemicals are greenhouse gases. One Oregon doctor who has done the math says some are much less damaging to the planet. 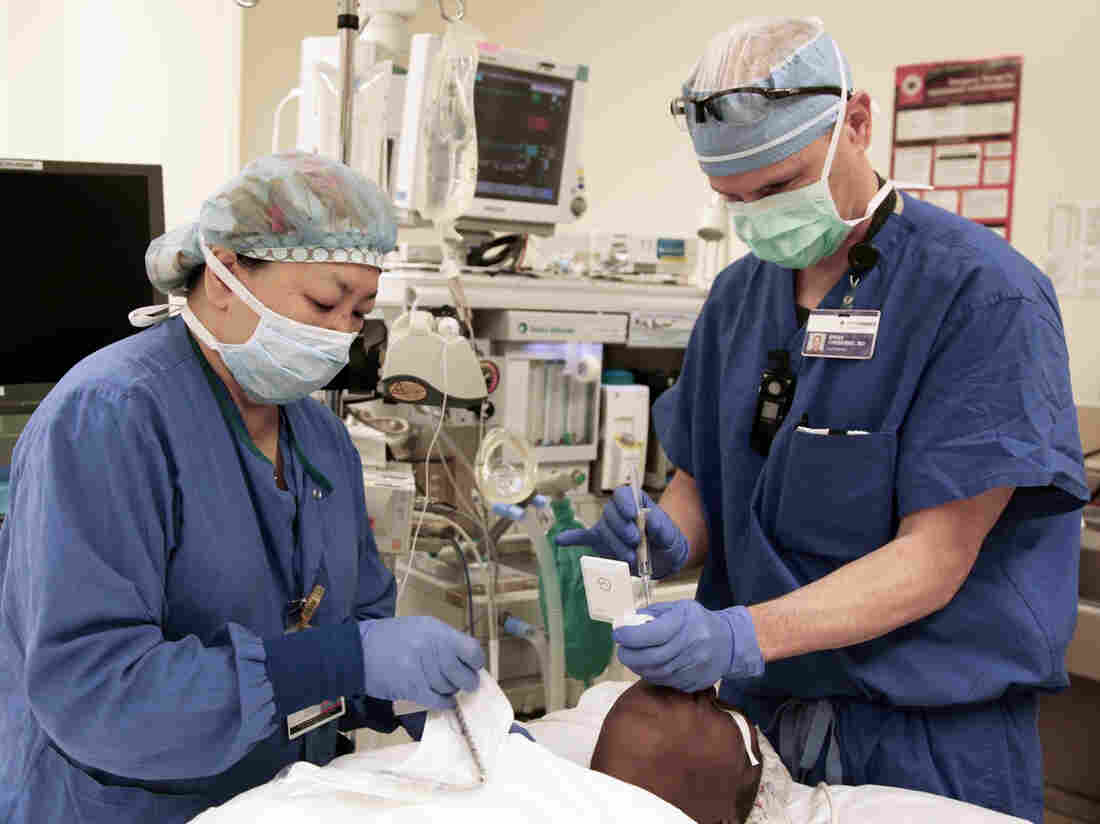 Dr. Brian Chesebro (right), in Portland, Ore., has calculated that by simply using the anesthesia gas sevoflurane in most surgeries, instead of the similar gas desflurane, he can significantly cut the amount of global warming each procedure contributes to the environment. Kristian Foden-Vencil/OPB hide caption 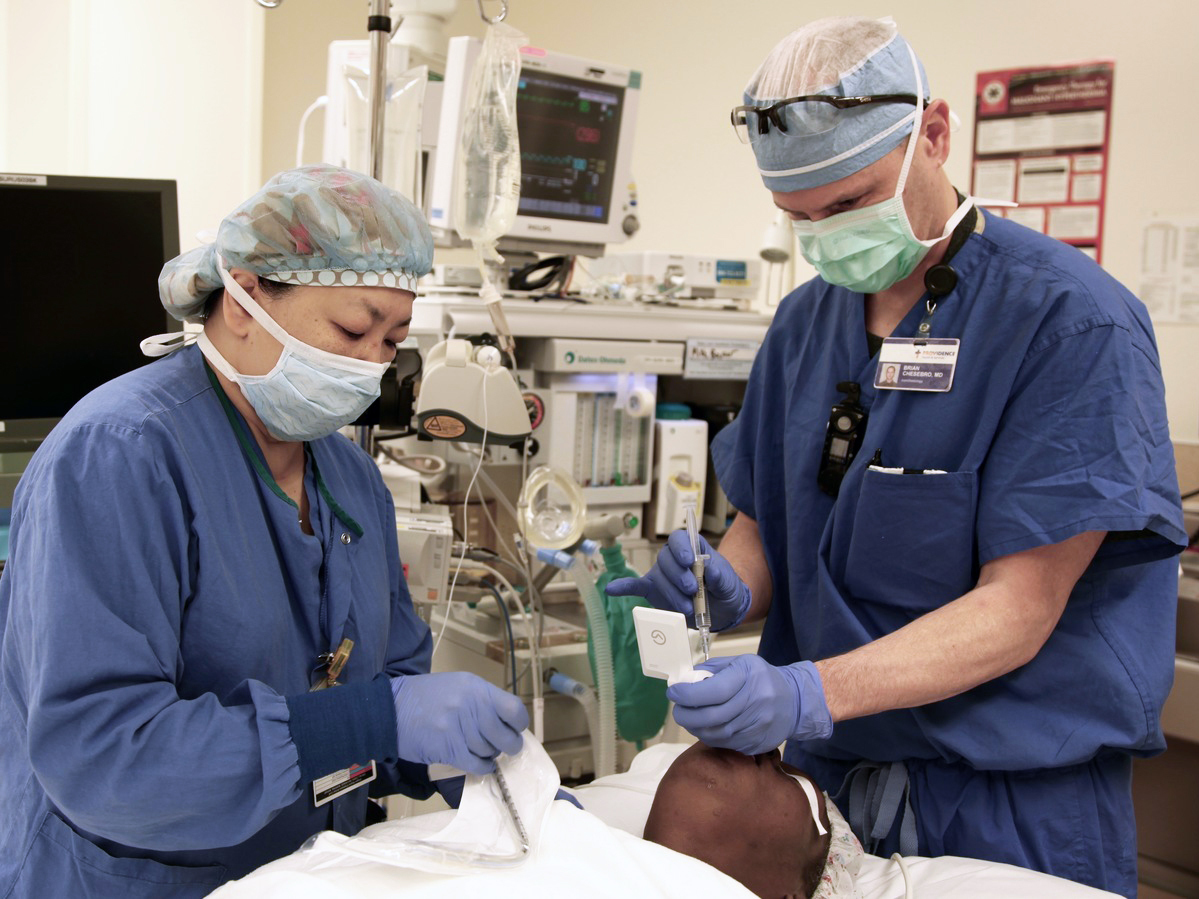 Dr. Brian Chesebro (right), in Portland, Ore., has calculated that by simply using the anesthesia gas sevoflurane in most surgeries, instead of the similar gas desflurane, he can significantly cut the amount of global warming each procedure contributes to the environment.

It's early morning in an operating theater at Providence Hospital in Portland, Ore. A middle-aged woman lies on the operating table, wrapped in blankets. Surgeons are about to cut out a cancerous growth in her stomach.

But first, anesthesiologist Brian Chesebro puts her under by placing a mask over her face.

"Now I'm breathing for her with this mask," he says. "And I'm delivering sevoflurane to her through this breathing circuit."

Sevoflurane is one of the most commonly used anesthesiology gases. The other big one is desflurane. There are others, too, like nitrous oxide, commonly known as laughing gas.

Whichever gas patients get, they breathe it in — but only about 5% is actually metabolized. The rest is exhaled. And to make sure the gas doesn't knock out anyone else in the operating room, it's sucked into a ventilation system.

And then? It's vented up and out through the roof, to mingle with other greenhouse gases.

These two gases are actually fairly similar medically; sevoflurane needs to be more carefully monitored and titrated in some patients, but that's not difficult, Chesebro says.

Generally, unless there's a reason in a particular case to use one over the other, anesthesiologists simply tend to pick one of the two gases and stick with it. Few understand that one — desflurane — is much worse for the environment.

And that bothered Chesebro. He grew up on a ranch in Montana that focused on sustainability. "Part of growing up on a ranch is taking care of the land and being a good steward," he says.

Now he lives in the city with his three kids and has gradually started to worry about their environmental future. "When I look around and I see stewardship on display today, it's discouraging," he says. "I got depressed for a while, and so I hit the pause button on myself and said, 'Well, what's the very best that I can do?' "

He spent hours of his own time researching anesthesiology gases. And he learned desflurane is 20 times as powerful in trapping heat in Earth's atmosphere as sevoflurane. It also lasts for 14 years in the atmosphere, whereas sevoflurane breaks down in just one year.

Opening a big black notebook, filled with diagrams and tiny writing, he shows how he computed the amount of each gas the doctors in his group practice used. Then he shared their carbon footprint with them.

"All I'm doing is showing them their data," Chesebro says. "It's not really combative. It's demonstrative. Ha, ha ha."

One of the doctors he shared his analysis with was Michael Hartmeyer, who works at the Oregon Anesthesiology Group with Chesebro. "I wish I had known earlier," Hartmeyer says. "I would have changed my practice a long time ago."

Hartmeyer says he was stunned when Chesebro explained that his use of desflurane was the greenhouse gas equivalent of driving a fleet of 12 humvees for the duration of each surgical procedure. It's "only" half a hummer if he uses sevoflurane. Hartmeyer notes that outside the operating room he drives a Prius.

"You try to be good," he says. "You take shorter showers or [don't] leave lights on, or whatever else. But you know there's always more that we could probably do. But this was, far and away, a relatively easy thing that I could do that made a huge impact." 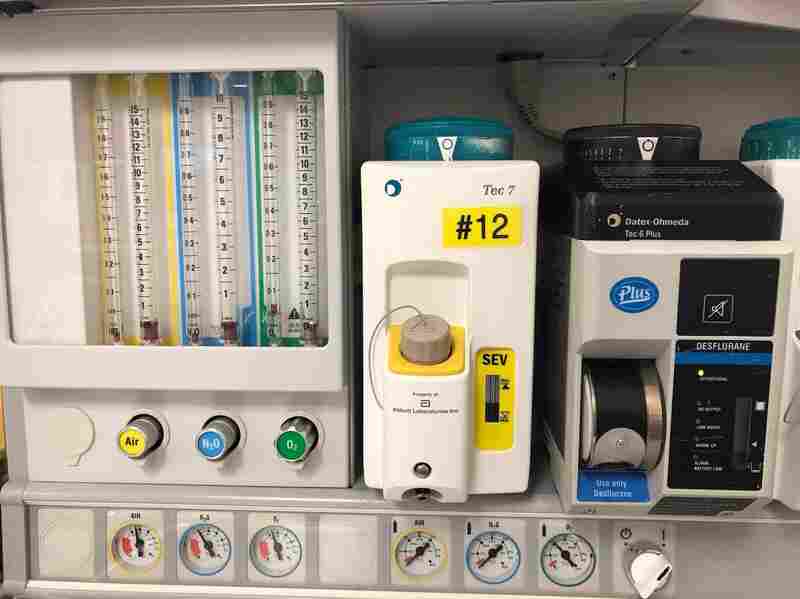 An anesthesia cart contains canisters for desflurane (right, with blue decals) and sevoflurane (center, with yellow decals). Both anesthetics are greenhouse gases, but desflurane's impact on global warming is 20 times as bad as sevoflurane's, Chesebro learned. Courtesy of Dr. Brian Chesebro hide caption 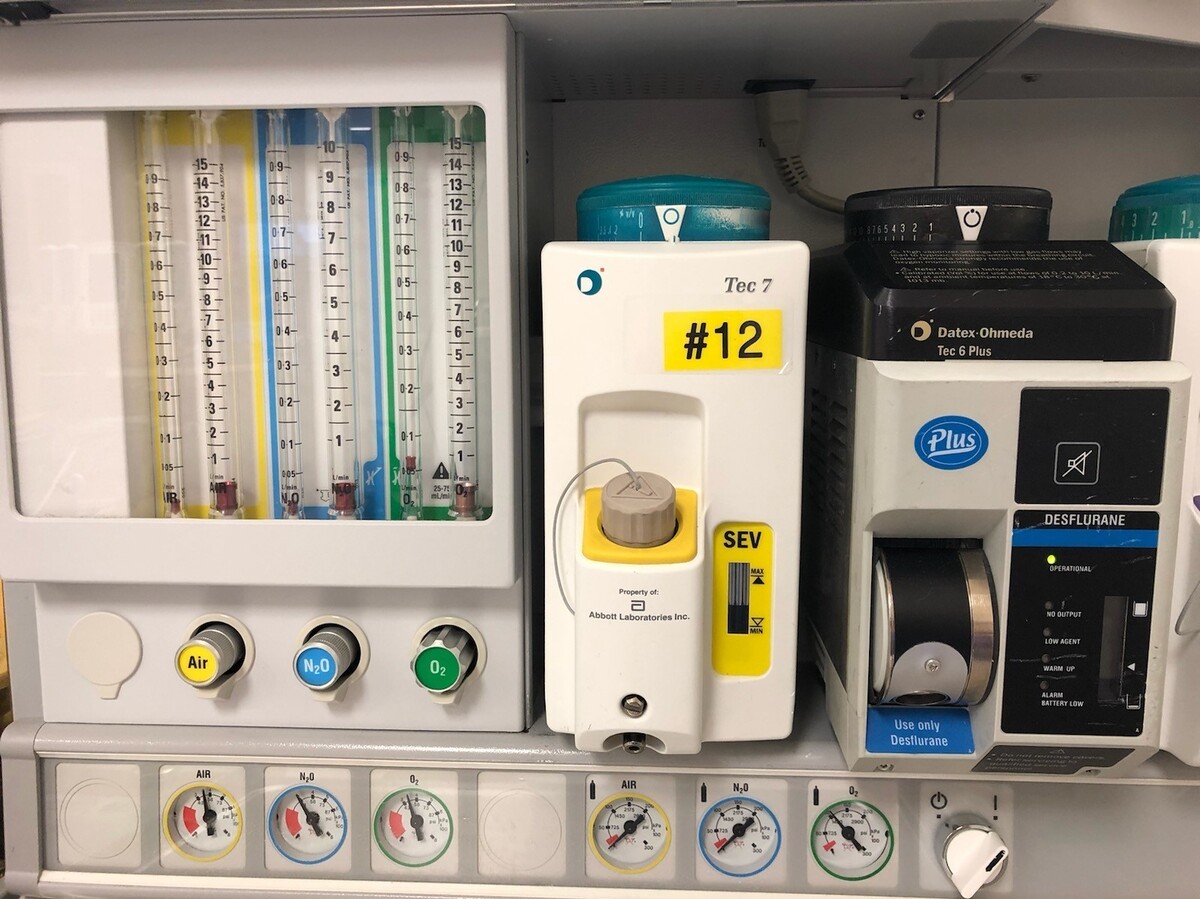 An anesthesia cart contains canisters for desflurane (right, with blue decals) and sevoflurane (center, with yellow decals). Both anesthetics are greenhouse gases, but desflurane's impact on global warming is 20 times as bad as sevoflurane's, Chesebro learned.

The anesthesiology carts that get brought into operating theaters tend to have a row of gases to choose from. So Hartmeyer was able to switch pretty much overnight.

Other anesthesiologists made the switch, too. And it didn't hurt that sevoflurane is considerably cheaper.

When Chesebro shared his findings with the anesthesia departments at all eight Providence Health hospitals in Oregon, they prioritized the use of sevoflurane. They now save about $500,000 per year.

Providence's chief executive, Lisa Vance, says the hospital system didn't change its use of the gas because of the money. It changed because the World Health Organization now says climate change is the No. 1 public health issue of the 21st century — and because of Chesebro.

Vance said Chesebro teared up in front of 2,000 people when talking about the gas, his children and the Lorax from Dr. Seuss. "Unless someone like you cares a whole awful lot, nothing's going to get better — it's not," says Vance, quoting the book.

She says several hospitals around the country have tried to make this shift, but with mixed results. Some just gave anesthesiologists the information, and not much changed. Other hospitals took desflurane away, but that left many anesthesiologists feeling disrespected and angry.

She thinks Chesebro succeeded because he chose to persuade his colleagues — using data. He showed doctors their choice of gas, plotted against their greenhouse impact. And it helped that he showed them over and over, so doctors could compare their progress with that of their peers.

"Providing ongoing reports to providers is the best way for this movement to catch on and grow," she says. It can reinforce over time, she adds, not just what their carbon footprint is, but also what progress they're making.

Sherman says efforts such as Chesebro's are sorely needed because the U.S. health sector is responsible for about 10% of the nation's greenhouse gases. "We clinicians are very much focused on taking care of the patient in front of us," she says. "We tend to not think about what's happening to the community health, public health — because we're so focused on the patient in front of us."

In an emailed statement, Baxter International, the manufacturer of the anesthesia gas, says it is important to provide a range of options for patients. The firm also says inhaled anesthetics have a climate impact of 0.01% of fossil fuels.

"The overall impact of anesthetic agents on global warming is low, relative to other societal contributors, especially when you consider the critical role these products have in performing safe surgical procedures," the statement reads.

It's a fair point, Chesebro says, but he has a counterargument.

The surgery Chesebro was involved in that morning at Providence was a success. Chesebro estimates that by using sevoflurane on his patient, the same greenhouse gases were produced as in a 40-mile drive across the Portland region.

If he had used desflurane instead, he says, it would have been like driving the more than 1,200 miles from Seattle to San Diego.

Now Chesebro's hospital bosses are hoping other doctors will follow his lead, research their own pet peeve, and maybe solve a problem no one's thinking about.

This story is part of NPR's reporting partnership with Oregon Public Broadcasting and Kaiser Health News, which is an independent journalism program of the Kaiser Family Foundation and not affiliated with Kaiser Permanente.