Accessibility links
3D Mammography Creates More Precise Images To Detect Breast Cancer : Shots - Health News Evidence is growing that 3D mammography provides more precise images and is better at detecting breast cancer — but the jury is still out on whether it saves lives. 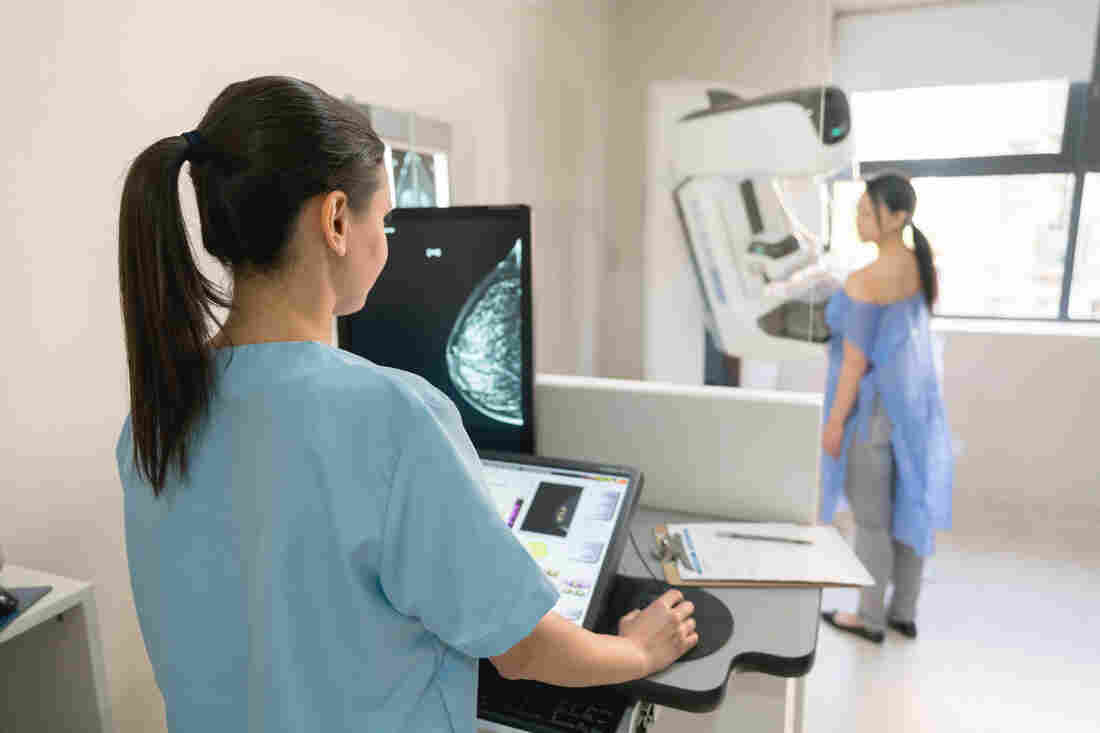 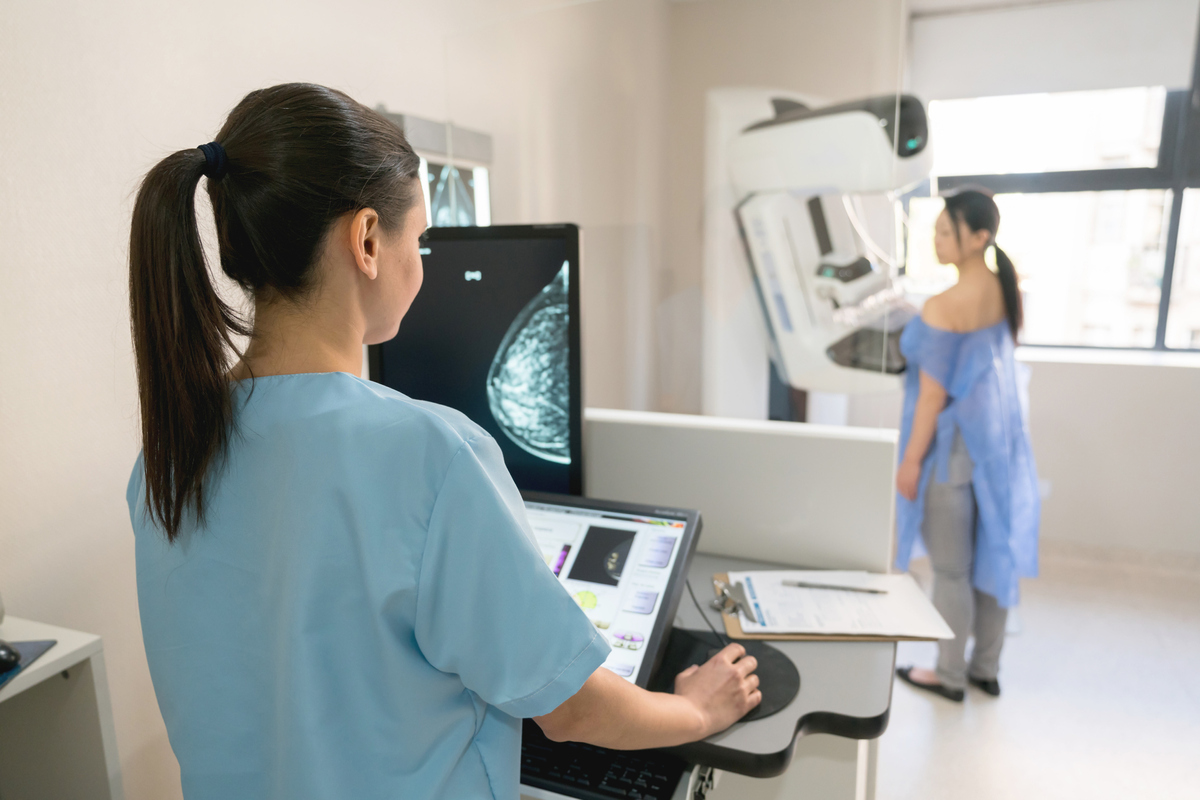 The newer 3D mammograms provide a more detailed picture of the breast tissue, leading to more precise detection of abnormalities.

When women get a mammogram they may be offered one of two types. The older type of mammogram takes a single straightforward X-ray image of the breast. The newer 3D takes pictures from many angles. Now, more evidence shows that 3D mammography offers a more thorough picture of breast tissue and is more accurate.

When Mary Hu, an administrator in communications with Yale School of Medicine, went to get a mammogram two years ago, she didn't even know she was getting 3D mammography, also called digital breast tomosynthesis. But she's glad that's what she got.

"I am really a walking advertisement for early detection through this advanced technology," she says. Thanks to 3D mammography her doctors found a small, but malignant tumor in her breast. They discovered it at a very early stage.

"My treatment was really as easy as it was because we caught it so, so early," says Hu, who had a lumpectomy to remove the tumor. And because it was detected so early, she didn't need chemotherapy. Her radiation was done in just three weeks and four days.

"If you have to get breast cancer you should do it the way I did; it was small and it was early stage," says Hu. Today, at 58, Hu remains cancer free.

Her radiologist, Dr. Liane Philpotts, with Yale Cancer Center, says Hu's experience is a great example of the accuracy of 3D imaging. Hu has dense breasts, which can make it challenging for radiologists to read mammograms since the breast tissue can mask worrisome tumors. With 3D mammography, Philpotts says doctors are able to see through breast tissue better than they can with 2D and are therefore more likely to discover tumors that may be "hiding" in dense tissue.

For patients, Philpotts says, they hardly notice the difference between 2D and 3D. The machines are the same and so is the process, which, of course, can be uncomfortable. Like traditional mammograms, 3D requires "immobilizing the breast and compressing such that there is no motion and such that we get fine detail," says Philpotts. 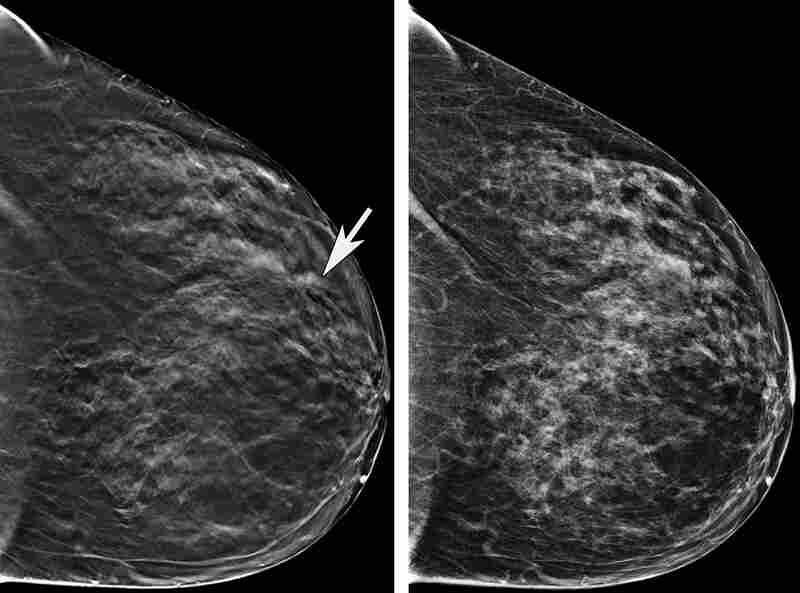 The mammogram image on the left is a 3D image showing an abnormality where the arrow is pointing. In the 2D image on the right, the abnormality is less clear. The patient underwent biopsy, which revealed breast cancer. Courtesy of Radiological Society of North America hide caption 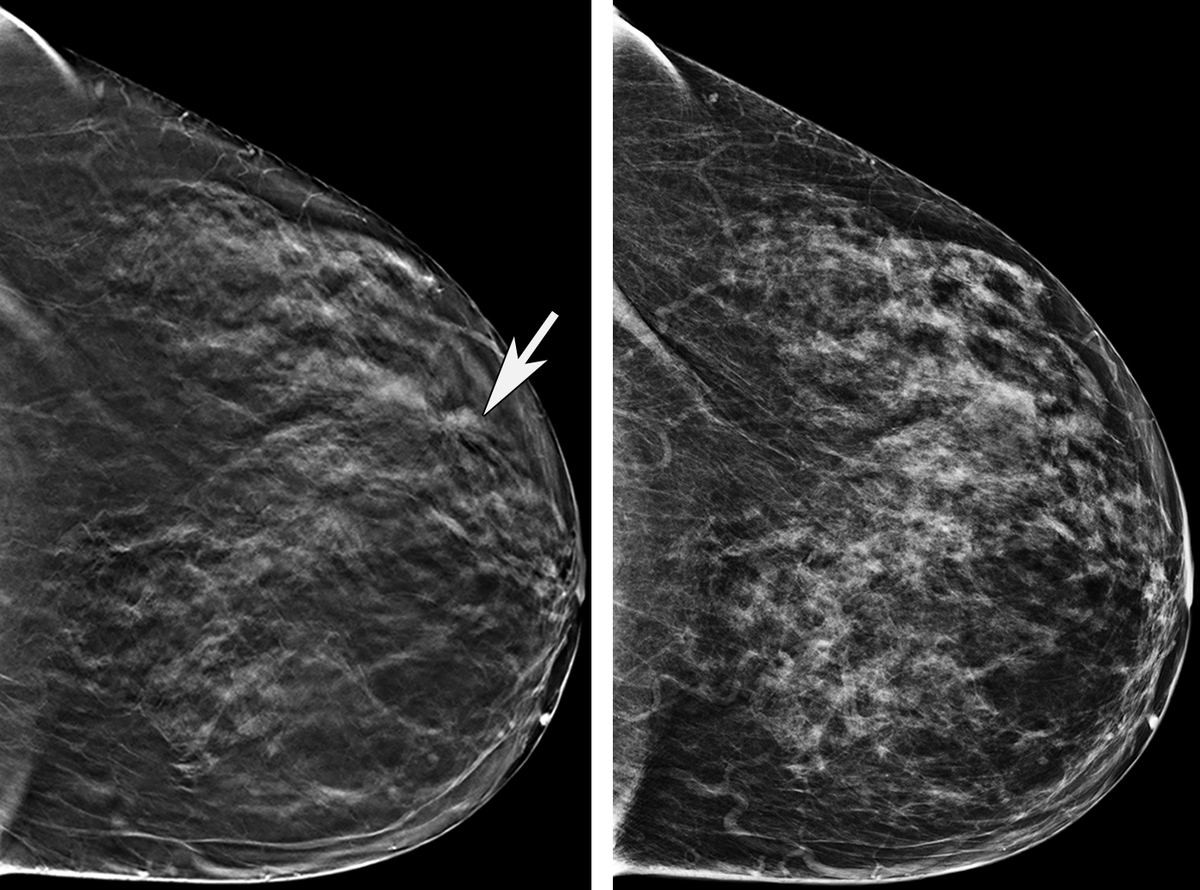 The mammogram image on the left is a 3D image showing an abnormality where the arrow is pointing. In the 2D image on the right, the abnormality is less clear. The patient underwent biopsy, which revealed breast cancer.

Both studies also find women who have 3D mammograms are less likely to be called back for further testing such as a follow-up mammogram or ultrasound. "By being able to look through breast tissue in thin layers we can see whether it is simply normal tissue or whether there is a true lesion," says Philpotts.

The FDA approved 3D mammography in 2011. In the first years after approval most radiologists used both 2D and 3D, which meant women got a double dose of radiation — which is not a good thing. But since then, software has been updated and the new machines create both 2D and 3D images. So today, with 3D, women are typically exposed to only a slightly higher dose of radiation as they were with 2D. But to be sure, it might be a good idea to check with your breast cancer screening center and make sure it has the newest machines that create both 2D and 3D images at the same time.

The data for 3D are looking "very good," says epidemiologist Robert Smith, vice president of cancer screening with the American Cancer Society. "We find a slightly higher rate of cancer detection, which is not trivial because we're finding more invasive cancers," he says. And, he says, recalling fewer women for follow-up testing means not only lower health care costs but a lot less stress and anxiety for patients.

But because the technology is relatively new, long-term studies just haven't been done. So the question now, says Smith, is whether 3D technology ultimately results in more lives saved. Detecting more cancers, some of which are slow-growing, doesn't necessarily add up to fewer deaths since some cancers are less invasive.

Smith says it's crucial to know whether 3D mammography does a better job than 2D at finding both slower-growing cancers and faster-growing ones.

The National Cancer Institute is now working to answer just that question. A large new study is the first randomized trial to compare 2D with 3D mammography for breast cancer screening. Results aren't expected for a number of years.

In the meantime, radiologist Philpotts says, if a breast cancer screening facility offers 3D, women should choose that. "It's really a no-brainer," she says. "We just get so much more information with 3D, it seems an obvious choice."

Today, about half of all breast cancer facilities offer 3D. And many insurers now cover the additional cost of 3D, which is about $60 more than 2D.