Accessibility links
How 'Brady Bunch' Measles Episode Is Fueling Campaigns Against Vaccines : Shots - Health News One of TV's most famous families laughed off measles in the 1960s. The episode has resurfaced in battles over measles vaccinations today. 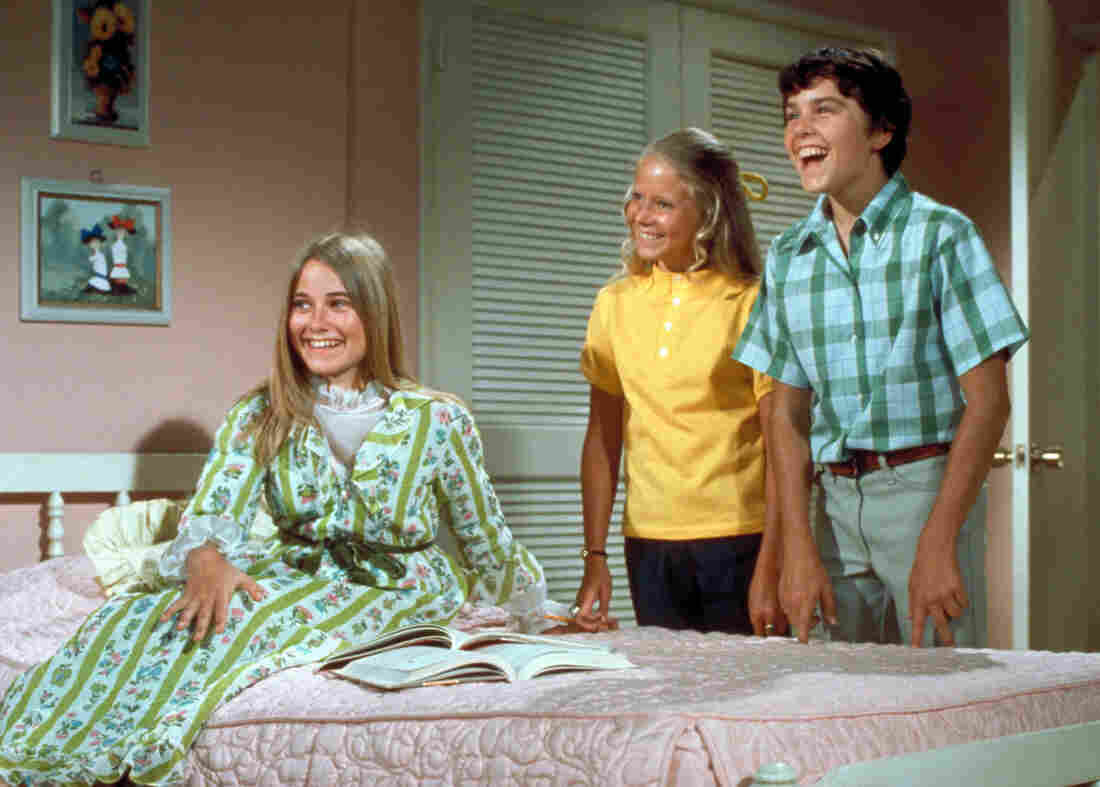 The Brady Bunch, circa 1970, with oldest sister Marcia seated in front. In one episode of the show from 1969, the sisters and brothers all stay home from school with measles. ABC Photo Archives/Getty Images hide caption 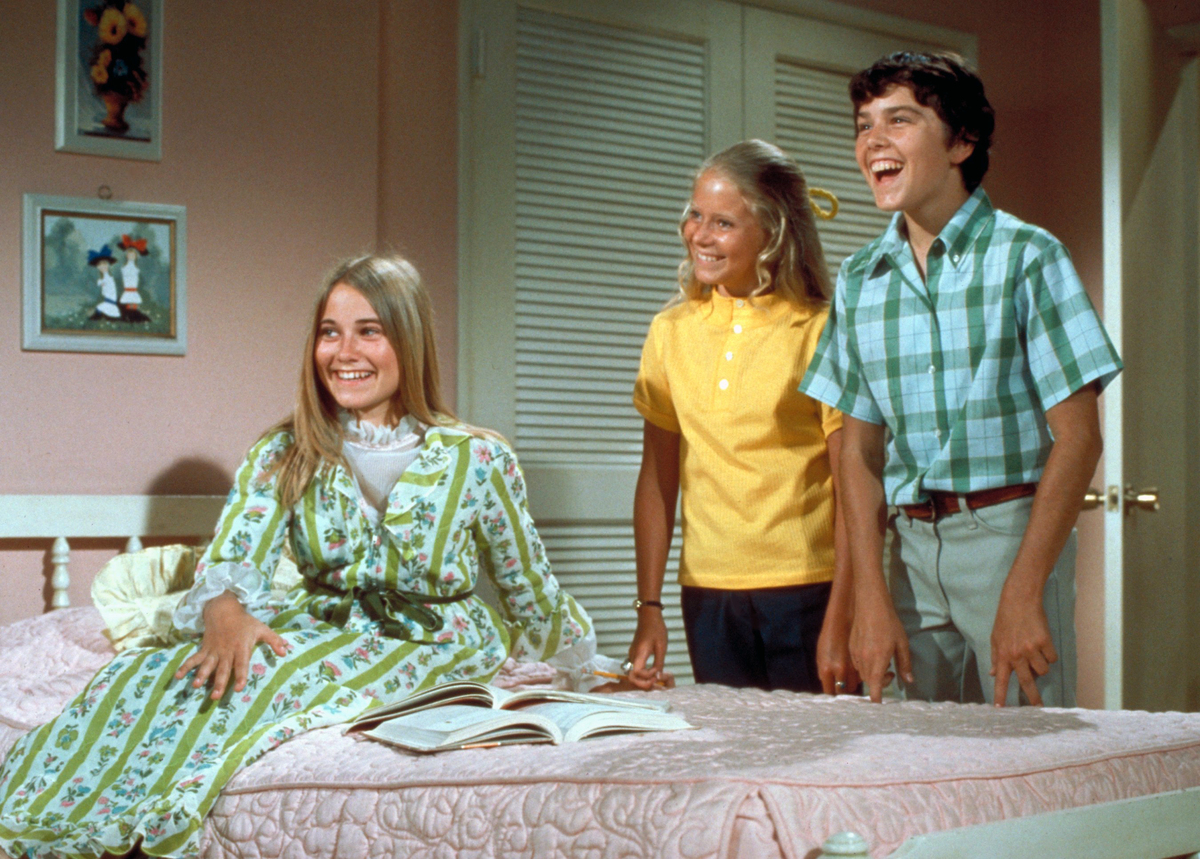 The Brady Bunch, circa 1970, with oldest sister Marcia seated in front. In one episode of the show from 1969, the sisters and brothers all stay home from school with measles.

As the number of measles cases nationwide rises to levels not seen since before the virus was declared eliminated in 2000, some people who oppose vaccines cite an odd cultural reference as evidence that the concern about measles is overblown: a 1969 episode of The Brady Bunch.

Some former Brady Bunch cast members aren't happy about it.

The episode "Is There a Doctor in the House?" features the whole family sick with measles. First, Peter gets sent home from school. Mother Carol Brady, played by Florence Henderson, describes his symptoms as "a slight temperature, a lot of dots and a great big smile," because he gets to stay home from school for a few days.

Once the rest of the six kids come down with measles, the youngest two Brady siblings fool around, with Bobby trying to color Cindy's measles spots green.

"If you have to get sick, sure can't beat the measles," sister Marcia says, as the older Bradys sit around a Monopoly board on one of the kid's beds. All the kids are thankful they don't have to take any medicine or, worse, get shots, the thought of which causes Jan to groan.

People who are critical of vaccines bring the episode up often. It's used in videos and memes and is cited by activists like Dr. Toni Bark, who testifies against vaccines in courts and at public hearings across the United States. To them, it aptly illustrates what they consider to be the harmlessness of the illness.

"You stayed home like the Brady Bunch show. You stayed home. You didn't go to the doctor," she says. "We never said, 'Oh my God, your kid could die. Oh my God, this is a deadly disease.' It's become that."

Del Bigtree, a TV producer who hosts a YouTube show critical of vaccines and who produced a movie about them, also looks to the episode to show that the current frenzy about the surge in measles cases is misplaced.

Some former cast members are upset the show is being used in 2019 to bolster arguments against vaccines. Maureen McCormick played Marcia as a teen. She found out a few months ago that an anti-vaccination Facebook group was circulating memes of her with measles from that episode, and she was furious, she says.

"I was really concerned with that and wanted to get to the bottom of that, because I was never contacted," she says.

"I think it's really wrong when people use people's images today to promote whatever they want to promote and the person's image they're using they haven't asked or they have no idea where they stand on the issue," she says, adding, "As a mother, my daughter was vaccinated."

McCormick says that she got measles as a child and that it was nothing like the Brady Bunch episode; she got really sick.

"Having the measles was not a fun thing," she says. "I remember it spread through my family."

In 1969, the year that the Brady Bunch episode came out, there were more than 25,000 measles cases and 41 deaths, according to data from the Centers for Disease Control and Prevention. It was six years after the vaccine was developed, and the vast majority of people who got sick with measles fully recovered, as they do today.

Elena Conis, an associate professor at the University of California, Berkeley, who specializes in medical history, explained that circumstances in 2019 are vastly different from those in 1969.

"In 1969, we had less control over infectious diseases," she says. "Smallpox was still a reality. There were far more cases of polio. In that context, it made sense to think of measles as a lesser threat."

Public health officials began to try to change the public consciousness about measles once a vaccine was developed, she says.

That effort to shift the public's understanding about measles is evident in the 1964 public service announcement, sponsored by the vaccine manufacturer Merck, called "Mission: Measles — The Story of a Vaccine."

"Many parents think of measles as just a common nuisance which makes their children feel miserable and keeps them out of school for a while. But physicians today know that measles is more than a nuisance," the announcer says, going on to warn of potential complications, such as bacterial infections, fatal pneumonia and brain inflammation.

The messaging worked, accompanied by federal funding initiatives directed toward childhood immunization. Over the next two decades, measles infections and deaths decreased precipitously as immunization levels went up. By 1984, there was just one death related to measles, historically low at the time and a far cry from the roughly 500 deaths each year attributed to measles before the vaccine was introduced.

Everyone who caught measles in the Brady Bunch episode was fine by the next episode, and most people who catch measles in 2019 will be fine too. But that's not always the case; the virus can cause pneumonia and, in severe cases, brain swelling and deafness.

In the ongoing measles outbreak in New York City, about 29 people have been hospitalized, six of whom needed intensive care, according to the city's health department. Two pregnant women in the city have contracted the virus in recent weeks, which could have severe complications for their babies; and a flight attendant who caught the virus while on a flight from New York City to Tel Aviv, Israel, was in a coma from measles complications, according to NBC.

"Dad would be sorry, because he believed in vaccination, had all of his kids vaccinated," he says.