Accessibility links
In 'Mind Fixers,' Anne Harrington Explores Role Of Drug Marketing In Mental Illness : Shots - Health News Mind Fixers, by historian Anne Harrington, takes a hard look at the ways the marketing of a new pill to treat a mental disorder can change the way the condition is defined and treated. 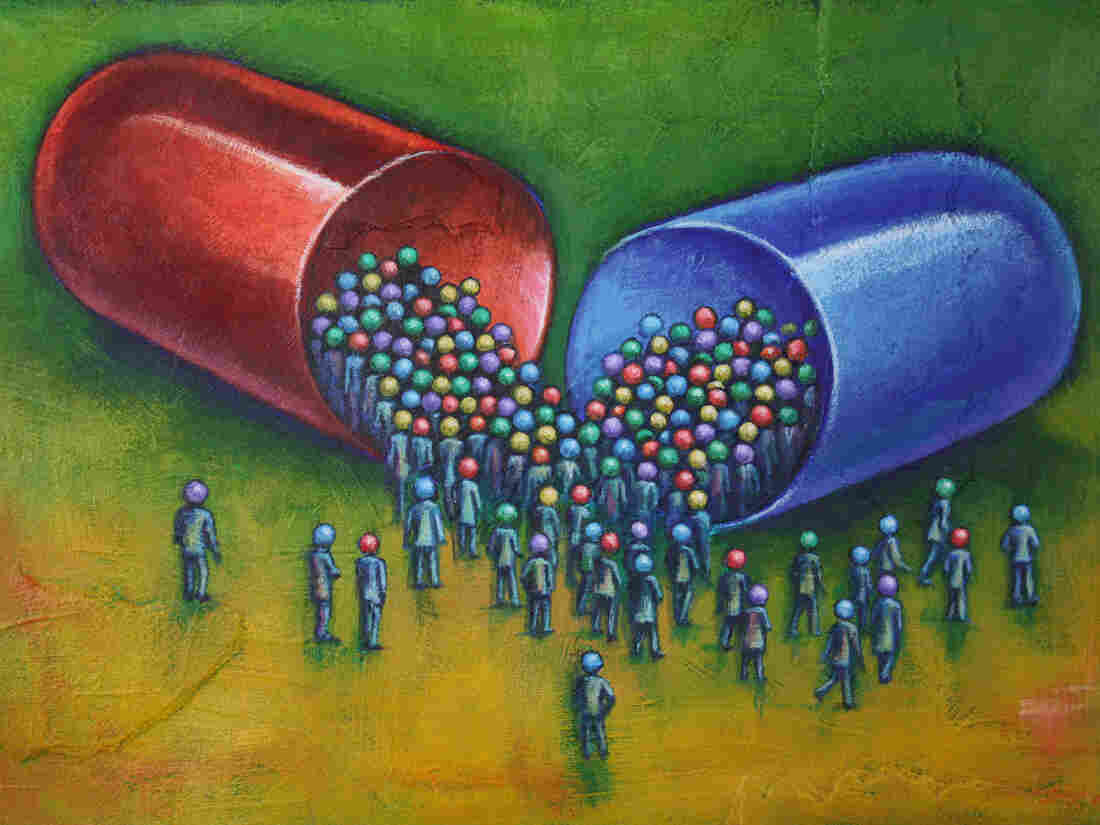 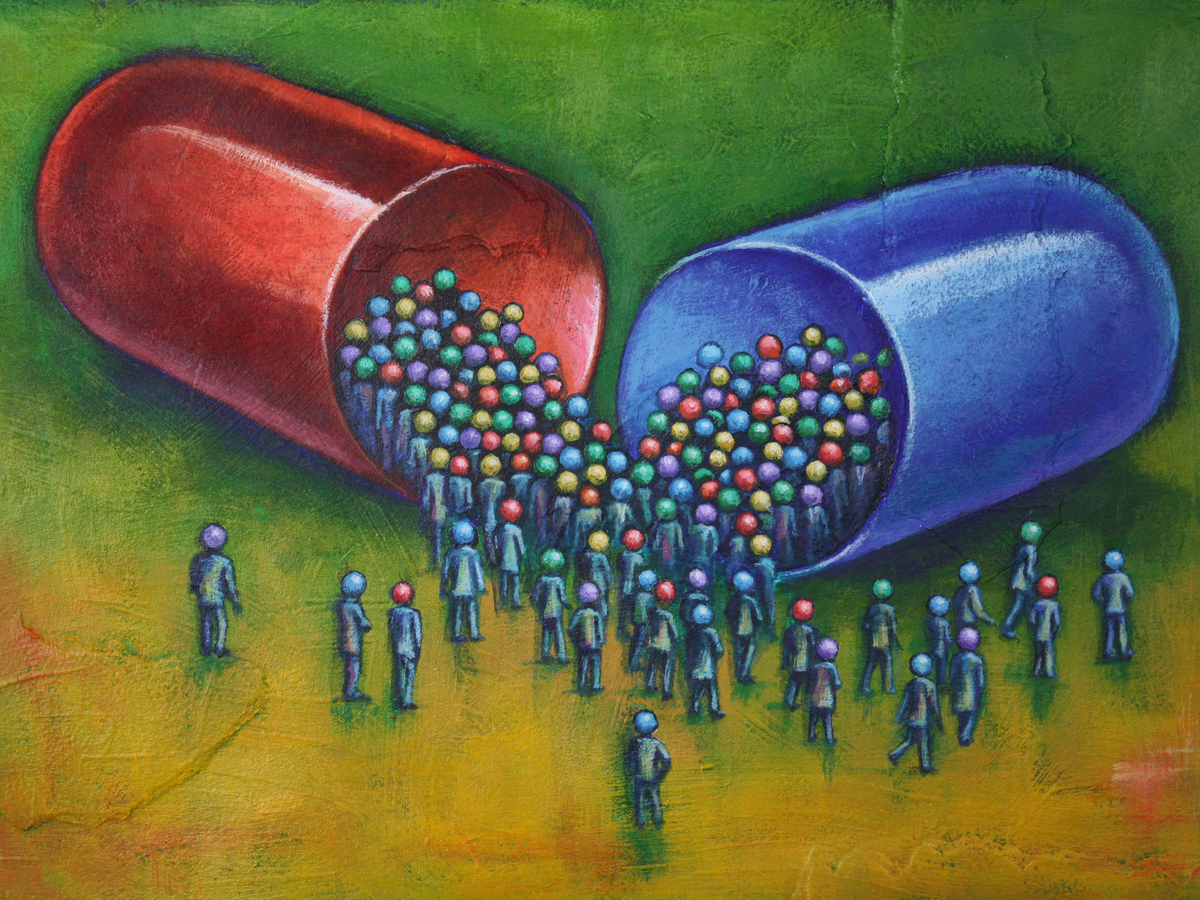 Historian and Harvard professor Anne Harrington believes that pharmaceutical companies have played an oversized role in determining how mental illness is treated in the United States — leading to a rise in the use of antidepressant drugs.

Harrington's new book, Mind Fixers: Psychiatry's Troubled Search for the Biology of Mental Illness, chronicles the history of psycho-pharmaceuticals, such as Prozac and Xanax, which have been used to treat depression and anxiety, as well as lithium, the first drug to treat what is now called bipolar disorder. 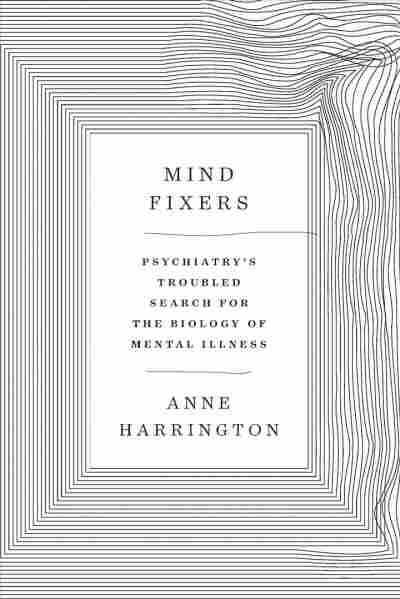 Psychiatry's Troubled Search for the Biology of Mental Illness

Prior to the 1970s, Harrington says, society tended to distinguish between forms of depression that should be treated medically versus depression caused by "bad stuff going on in your life," which was thought to be treated best by talk therapy.

But as pharmaceutical companies began to market antidepressant drugs, the focus of treatment for many people moved away from talk therapy. Harrington says this shift has not always served patients well.

"We don't know enough about the biology of these mental disorders to know whether or not some of the reasons are biological — in the sense that medicine likes to think of these things as diseases — and whether it's just because they're having terrible problems," Harrington says. "I would love to see a larger, more pluralistic set of options."

There had been an enormous market for anti-anxiety medications. ... In 1978, I think something like 2.2 billion pills of Valium were sold in one year. It was the bestselling prescription drug of all time in the 1970s. And it was an anti-anxiety medication, but then it turned out it was addictive, and people couldn't get off it. The market for the benzodiazepine plummets. But where are these people — what are we going to do for these kinds of patients?

Well, it had long been known that one of the symptoms of depression was often anxiety. And so it became possible to think, "Well, maybe these patients who were previously being diagnosed with anxiety, in fact, suffer from depression with acute anxiety presentation, and maybe the antidepressants will help." And they did. And so you've got the expanding pool of people suffering from "depression." You've got the emergence of depression in the way we think about it now — as the common cold of psychiatry.

You've also got a development in which there's a collapse of a previous distinction that the field had made between forms of depression that should be treated medically and forms of depression that were seen to be neurotic or reactive, that were caused by bad stuff going on in your life, and that it was widely thought should therefore be treated with talk therapy. But if medication helps everybody, then maybe these distinctions, some say, aren't so important; maybe what's more important is the severity of the symptoms. And at some point, the symptoms are severe enough [that] medication might then be what you choose to prescribe the patient.

On why Prozac was a game changer in psychiatry

The irony of Prozac's blockbuster success was that its manufacturer, Eli Lilly, didn't really expect much from it. Prozac goes on the market, and because it's been framed as safer [than previously available antidepressants], people start prescribing it. General practitioners and psychiatrists are prescribing Prozac over other brands, and they also start prescribing it to patients to whom they might previously have hesitated to prescribe what would be perceived as a more dangerous tricyclic antidepressant.

You've got the emergence of depression in the way we think about it now, as the common cold of psychiatry.

So the market for this antidepressant grows in part because the patient pool to whom it's being prescribed grows enormously.

On why the antidepressant market is now at a standstill

The huge developments that happen in the story of depression and the antidepressants happens in the late '90s, when a range of different studies increasingly seemed to suggest that these antidepressants — although they're helping a lot of people — when compared to placebo versions of themselves, don't seem to do much better. And that is not because they are not helping people, but because the placebos are also helping people. Simply thinking you're taking Prozac, I guess, can have a powerful effect on your state of depression. In order, though, for a drug to get on the market, it's got to beat the placebo. If it can't beat the placebo, the drug fails.

On lithium, the first drug to treat bipolar disorder

The first thing to know about lithium to understand its strange place in the history of psychiatry is that, unlike all the other drugs, it wasn't invented in a laboratory. It's an element. It's found in the natural world. And it's found, for example, in certain kinds of spas in Europe that, in the past, bragged about the high lithium content of their drinking water. And so it had a place in spa culture. It had a place as a feel-good tonic. It was, for a period of time, an ingredient in a new lemon-lime soft drink that became quite popular up through the 1950s that gets renamed 7UP [which doesn't contain lithium today].

But there was this previous history of lithium. And then lithium ... is used in all sorts of other things, too, that have nothing to do with the health industry. But its fortunes as a product in the health industry take a nosedive when a compound of lithium is used as the basis for a salt substitute that ends up, people believe, causing heart problems and even several deaths. And so there's a warning sent out by the AMA and then eventually FDA that these salt substitutes — "take them off the market. This is a dangerous drug." And so lithium's emergence in psychiatry emerges against the background of two relevant facts: One, it has a reputation [all of a sudden] for being dangerous and, two, it's not going to make a pharmaceutical company very much money, because they can't patent it. ... I think there are a lot of people who say it's a very good drug. And there are some people who still take lithium. The problem with lithium [for drugmakers] is that it wasn't profitable.

On why pharmaceutical companies are leaving the psychiatric field

Because there have been no new good ideas as to where to look for new, novel biomarkers or targets since the 1960s. The only possible exception is there is now some excitement about ketamine, which targets a different set of biochemical systems. But R&D is very expensive. These drugs are now, mostly, off-patent. ... [The pharmaceutical companies'] efforts to bring on new drugs in that sort of tried-and-true and tested way — with a tinker here and a tinker there — has been running up against mostly unexplained but indubitable problems with the placebo effect.

Sam Briger and Mooj Zadie produced and edited the audio of this interview. Bridget Bentz, Molly Seavy-Nesper and Deborah Franklin adapted it for the Web.