Accessibility links
With Alzheimer's Drugs Still Elusive, Scientists Now Look Beyond Amyloid : Shots - Health News Now that so many experimental drugs targeting amyloid-beta have bombed, scientists are looking for different approaches for treating Alzheimer's, including a drug that failed as a cancer treatment. 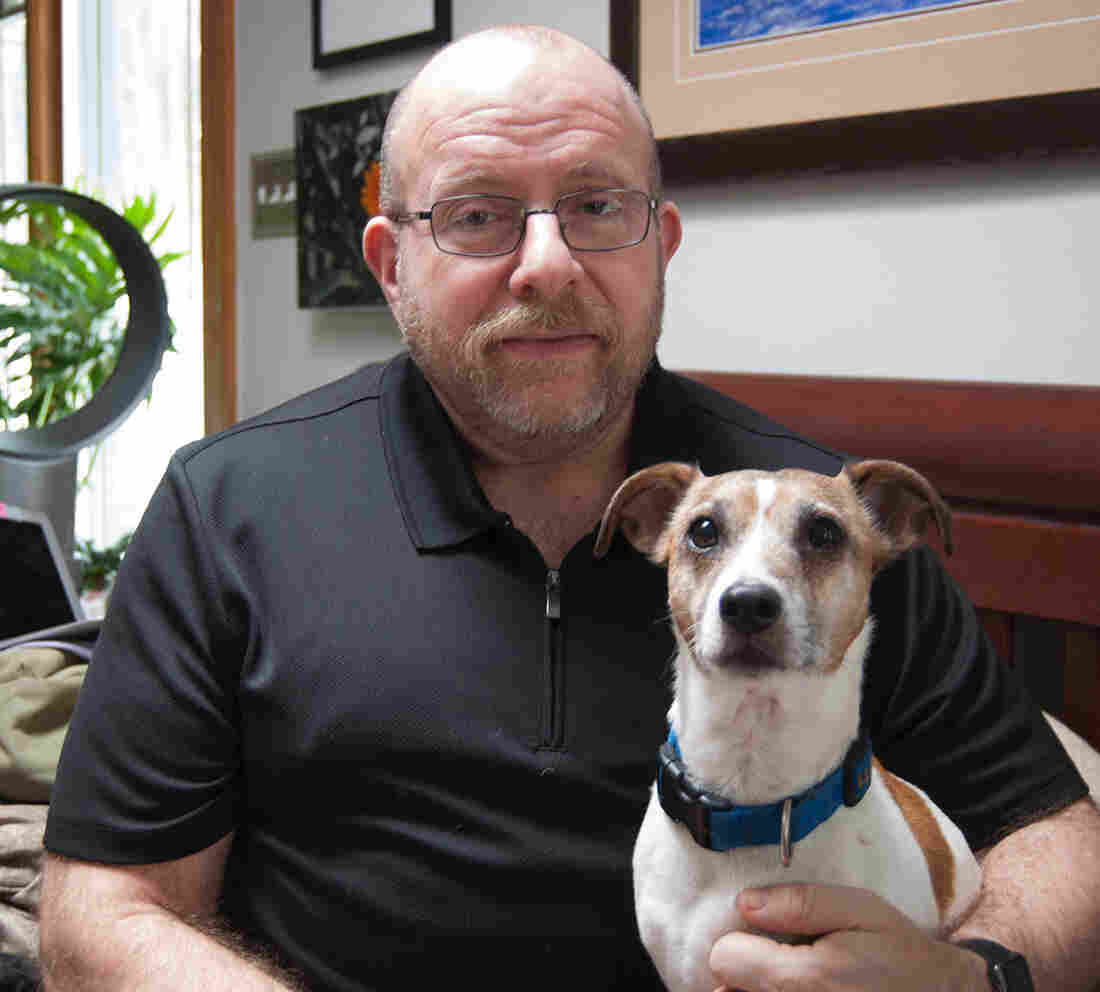 Phil Gutis with his dog, Abe, who died last year. Gutis, who has Alzheimer's, hoped an experimental drug could help preserve his memories. Courtesy of Timothy Weaver hide caption 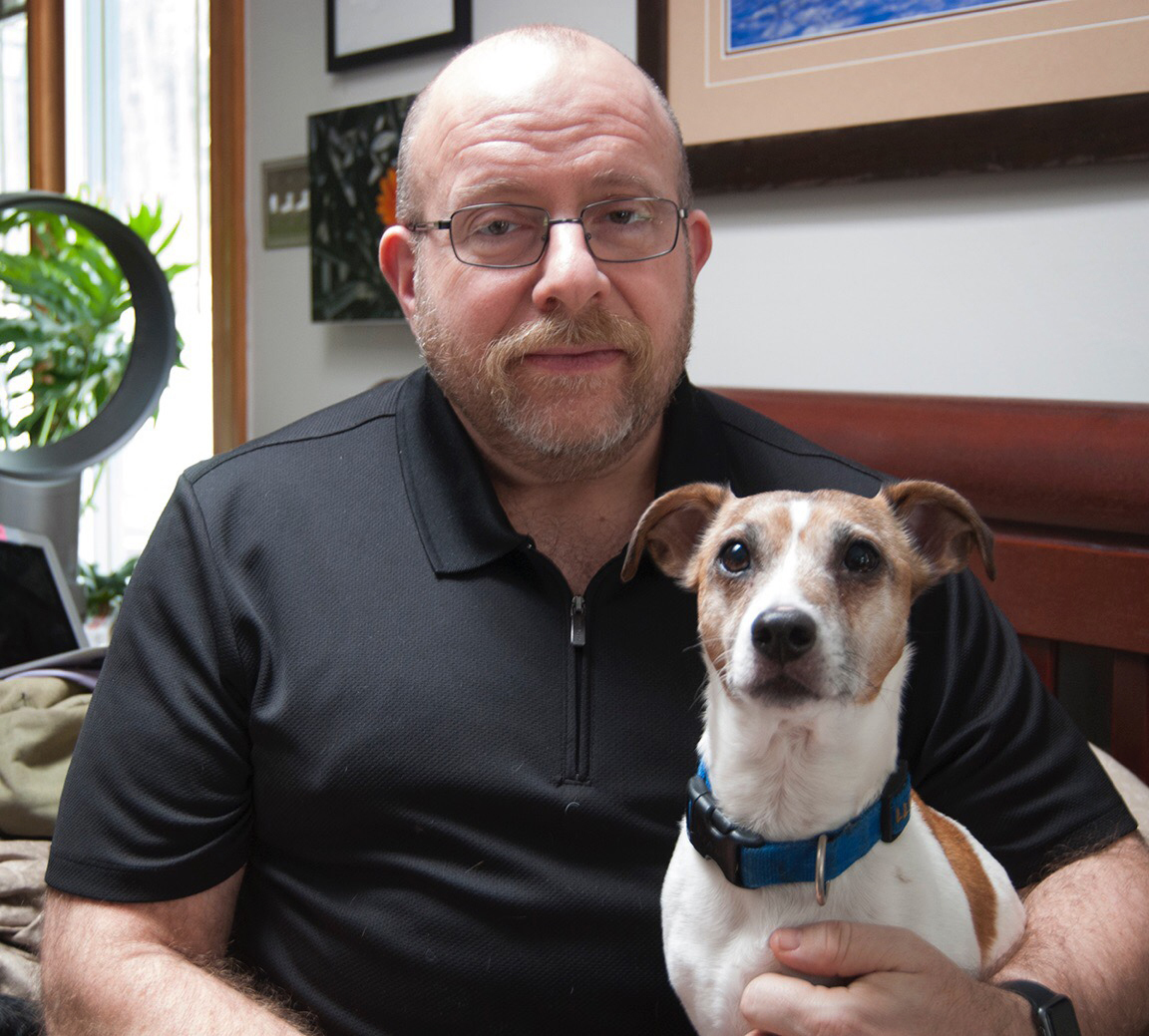 Phil Gutis with his dog, Abe, who died last year. Gutis, who has Alzheimer's, hoped an experimental drug could help preserve his memories.

Scientists are setting a new course in their quest to treat Alzheimer's disease.

The shift comes out of necessity. A series of expensive failures with experimental drugs aimed at a toxic protein called amyloid-beta have led to a change in approach.

The most recent disappointment came in March, when drugmaker Biogen and its partner Eisai announced they were halting two large clinical trials of an amyloid drug called aducanumab.

"It was like being punched in the stomach," says Phil Gutis, 57, an Alzheimer's patient in one of the trials. "Participating in this trial, it gave me hope for the future."

Gutis, who once was a reporter for The New York Times and worked as an advocate at the American Civil Liberties Union, had hoped the experimental drug would preserve some of his remaining memories.

The day before the aducanumab trial ended, Gutis had been leafing through pictures of his dog, Abe, a Jack Russell terrier who died last year. He was trying to remember the companion who'd shared his life for 12 years.

"But there were no memories," he says. "And then I told a friend about this and she said, 'You don't remember walking on the trail and how he used to scamper ahead and try to trip you?' And I'm like, no, I don't."

The failure of aducanumab was a huge letdown for both patients and researchers.

Even though previous amyloid drugs had faltered, this one had a remarkable ability to remove the toxic protein from the brain. And preliminary studies had suggested it might also slow the progression of dementia.

So the end of aducanumab appears to signal the end of the era in which pharmaceutical companies poured billions into amyloid drugs. "The scientists have largely said, 'OK, we give up,'" Gutis says.

Now the question is: What comes next? And scientists say there is a wide range of potential answers.

Current strategies include everything from modulating the brain's immune system to finding drugs that can protect healthy brain cells from toxins.

"Dealing with the amyloid is probably important, but it's not going to be sufficient," says Dr. Daniel Alkon, president and chief scientific officer of the biotechnology company Neurotrope.

Before helping to found Neurotrope, Alkon spent decades as a researcher at the National Institutes of Health and then the Blanchette Rockefeller Neuroscience Institute at West Virginia University. His research focused on memory formation and the wiring that allows brain cells to communicate.

And that led him to focus on a key feature of Alzheimer's that didn't involve amyloid.

"One of the earliest events in Alzheimer's disease is the loss of that wiring," Alkon says. "And as the wiring loss progresses the cognitive function loss progresses."

So Alkon and a team of scientists studied mice that had been genetically altered to develop a condition similar to Alzheimer's.

And he says they realized something surprising.

"You saw this very significant loss of wiring and you could actually reverse it," he says. "You could regenerate the wiring."

The brain did this by creating new connections between brain cells. And this process was controlled by a naturally occurring protein called PKC-epsilon.

Alkon's team thought if they could find a way to tweak PKC-epsilon, maybe they could get the brain to replace some of the wiring lost in Alzheimer's.

"We asked, is there any known drug in the world that can target PKC-epsilon safely, without hurting a patient," Alkon says.

And they found one.

It's called bryostatin-1 and it comes from a tiny marine animal often mistaken for seaweed.

Decades ago, researchers at the National Cancer Institute studied bryostatin as a treatment for cancer. That effort didn't work out.

But Alkon thought bryostatin might work for Alzheimer's because it was really good at activating PKC-epsilon.

So his team tried it, first on animals and then a small group of people, including a man named Frank.

"He had been sitting in a chair staring at the ceiling, hallucinating," Alkon says. "Within a couple of weeks of our treating him he started swimming, playing pool, communicating, feeding himself."

Two preliminary studies hinted that patients with advanced Alzheimer's could get better with bryostatin. And a more rigorous study of about 150 people suggested a modest benefit for some.

So now Neurotrope is working to confirm those results in another trial.

And, of course, bryostatin is just one potential treatment, says Dr. Steven Arnold, a professor of neurology at Harvard Medical School and Massachusetts General Hospital.

Several other experimental drugs target a toxic substance called tau that builds up inside the brain cells of Alzheimer's patients, he says. And still others target inflammation or brain cells' mechanisms for clearing out toxins.

"These are all really powerful ways in which we can perhaps prevent, delay or even reverse Alzheimer disease," Arnold says.

Some of the experimental drugs may have applications beyond Alzheimer's. That's because these drugs are intended to protect brain cells from a variety of threats and help them function better.

"If we do that, we may find that it's not only good for Alzheimer disease but it's also good for other degenerative conditions of the brain, like Parkinson's disease," Arnold says.

In the meantime, Alzheimer's patients like Gutis, who now serves as an advocate for the Alzheimer's Association, continue to look for anything that might help.

Gutis was devastated when the drug trial he'd been in was halted. But asked if he'd enroll in another trial he says, "I would. In a second."