Accessibility links
How You (And Your Dog) Can Avoid Snake Bites And What To Do If You Get One : Shots - Health News It was a warm, wet winter this year across much of the U.S., which means more snakes and a higher risk of bites. Here are some tips for avoiding vipers and their venom. 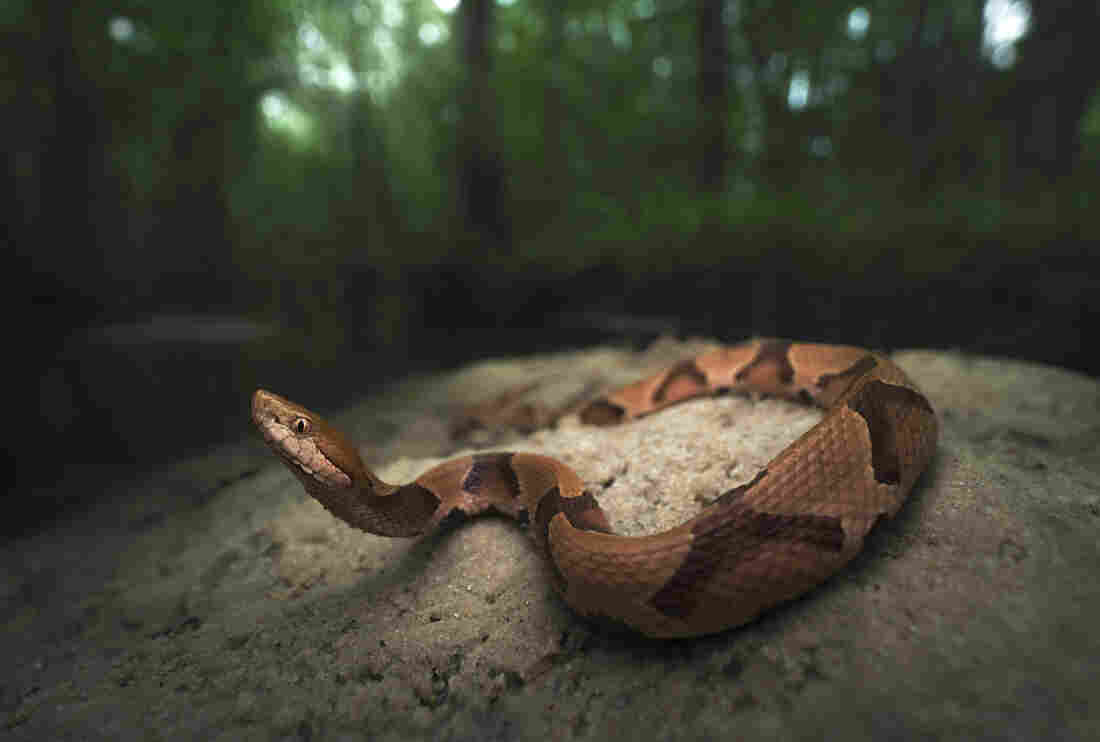 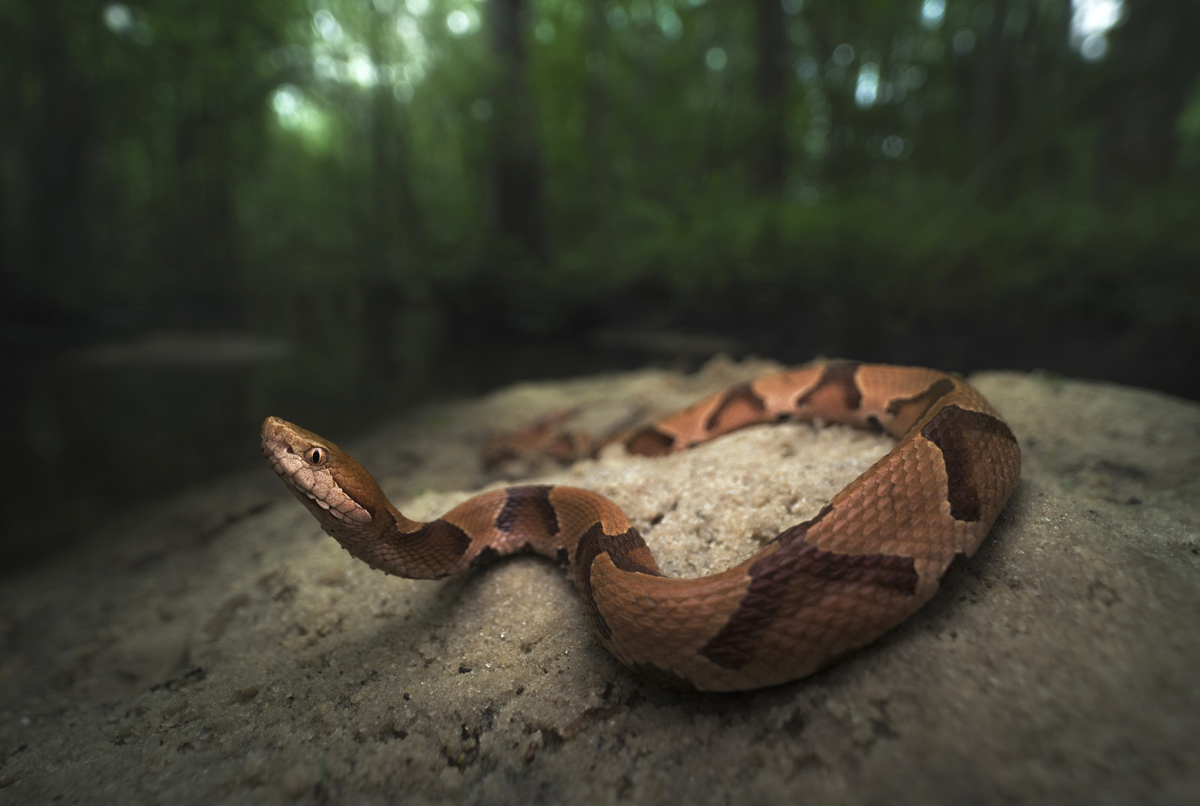 Copperhead snakes are one of the four kinds of venomous snakes in the United States.

It was a warm, wet winter this year across much of the United States. In most states, this means more greenery, more rabbits, more rodents and more snakes — which raises the risk of snake bites for humans and their canine companions.

Biologist Gerad Fox is standing next to a loud rattlesnake. "Right now he's in a classic strike posture, very defensive," says Fox. "The rattle is a warning, saying, 'Back off. I'm dangerous. You should leave me alone.' "

I took my dog, Baxter, to one of these classes, where he learned how to recognize the sight and scent of snakes as a danger to avoid.

"Snakes are part of our ecosystem and deserve to be there," says Fox. They don't want to hurt us, he explains, but if you or your dog stumble on one by mistake, they will bite.

"Rattlesnakes can bite multiple times. They have a large reservoir of venom," says Fox.

Every year, an estimated 7,000 to 8,000 people get bitten in the U.S., according to the Centers for Disease Control and Prevention. Only about five of those people die. The CDC says the number of deaths would be much higher if people didn't seek medical care as soon as possible. 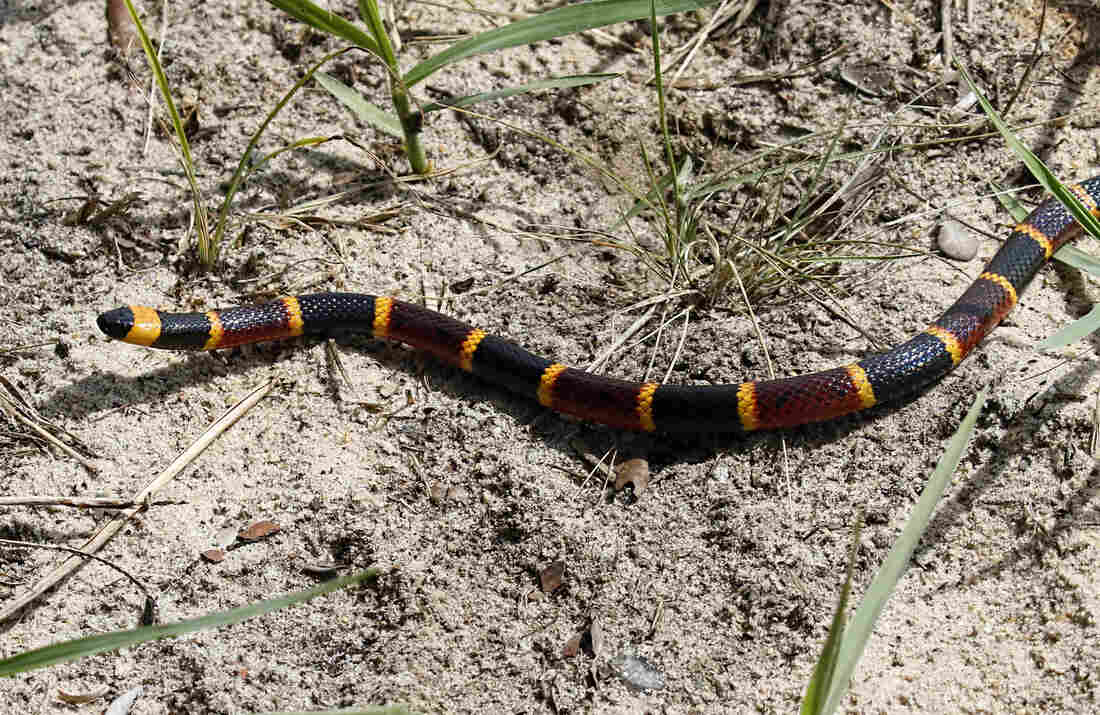 Coral snakes, like this one, are sometimes mistaken for nonvenomous kingsnakes, which have a similar band of colors. If a snake has red bands that are touching yellow bands, then it is venomous, according to the CDC. stvneasley/EOL.org hide caption

There are four types of venomous snakes that roam the United States. Coral snakes are found in wooded, sandy or marshy areas in the South. Water moccasins live in the southeastern states. Copperheads, which vary in color from reddish to golden tan, are found in eastern states. And rattlesnakes live in mountains, prairies, deserts and beaches – basically everywhere across the country, including Fryman Canyon Park, where Baxter and I like to hike. It's the closest thing to wilderness I have in my Los Angeles neighborhood. 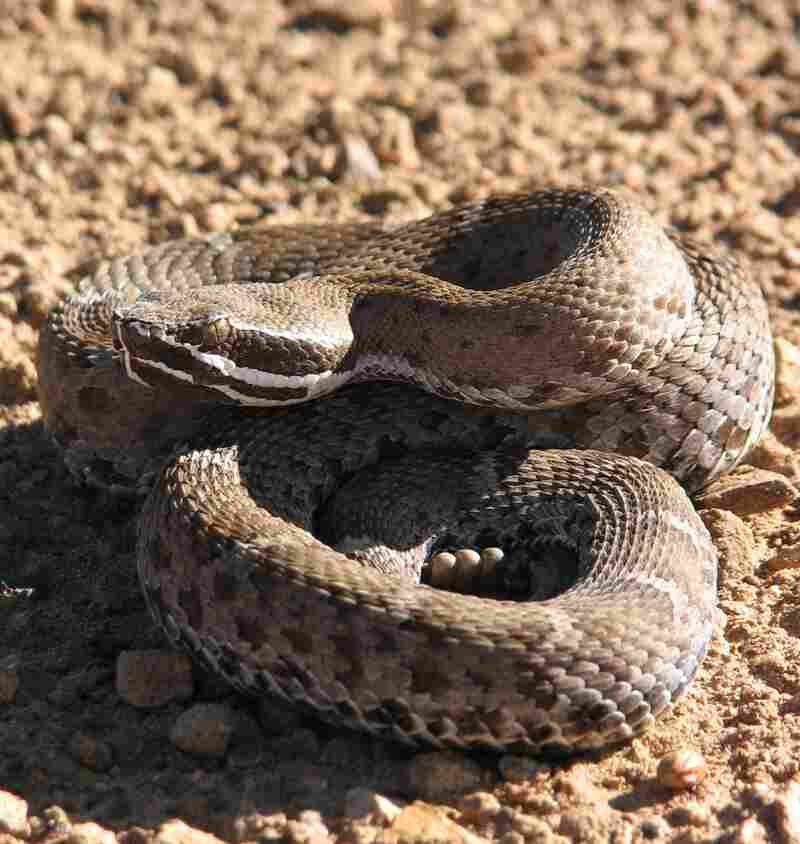 Rattlesnakes are venomous and are found throughout the United States. Ken Lamberton/EOL.org hide caption 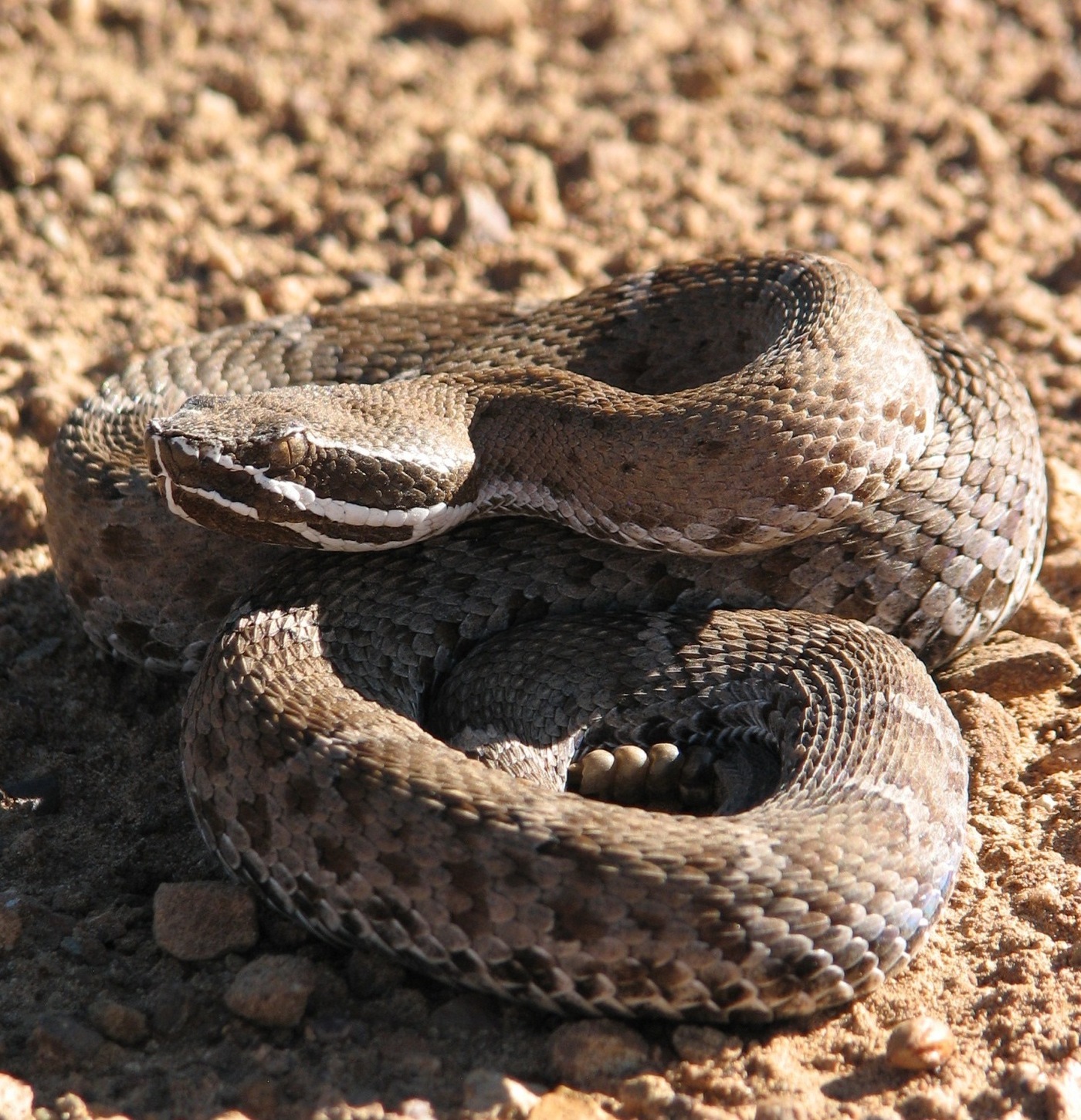 Rattlesnakes are venomous and are found throughout the United States.

Now that Baxter has received some training on how to avoid rattlesnakes, I wanted to know what humans can do to reduce our own risk of getting bitten. So I invited emergency room physician Mark Morocco to join me on an early morning hike.

"The canyons and passes in Southern California are places where the animals can be relatively undisturbed," says Morocco, who works at Ronald Reagan UCLA Medical Center.

"The snakes aren't going to hunt you. They're not coming after you," he says.

But if you accidentally step on a snake, then it will reflexively bite. "That's the majority of snake bites for people who are hiking," Morocco says.

So what is the best way to avoid getting bitten?

Stay on the trail

The No. 1 rule when hiking in snake territory is to stay on the trail. "You want to be able to see your feet, see where you're stepping," Morocco says. "Don't get into the high brush on the side of the trail, because that's where the snakes are going to be and they're going to be harder to see."

And if you're rock climbing, watch where you put your hands. You don't want to grab a snake by mistake and surprise it.

Keep the dog on a leash

Like humans, dogs are more likely to get bitten when they go off the trail, so it's best to keep your pup on a leash. And in addition to signing your dog up for a snake avoidance class, there are snake vaccines available for dogs, so check with your vet.

The next important consideration is what you have on your feet. "Most people would argue that you should be wearing boots with high sides if you're in a place with lots of snakes," Morocco says. "I would just prefer that you at least wear shoes." He has seen patients in his emergency department who have been bitten while barefoot. "We say: 'You were barefoot where?' "

This is a hard one in warm climates, but wearing long pants can help since most people get bitten in the lower leg.

Keep an eye on the kids

Like dogs, kids are curious. They interact eagerly with their environment, looking closely at things and often reaching out to touch.

"I've seen a number of patients in my career — little kids who've been bitten in the face or the dominant hand," Morocco says. "Because that's what kids do. They see this thing, they reach out to touch it and bang! — they get a snake bite."

Snake bites can be more dangerous for children than for adults, because they are smaller and are often bitten on the face, which is more serious than a bite on the leg or hand. "Children get sick very quickly," Morocco says.

So what do you do if you or a loved one gets bitten?

You need to get medical treatment as soon as possible. 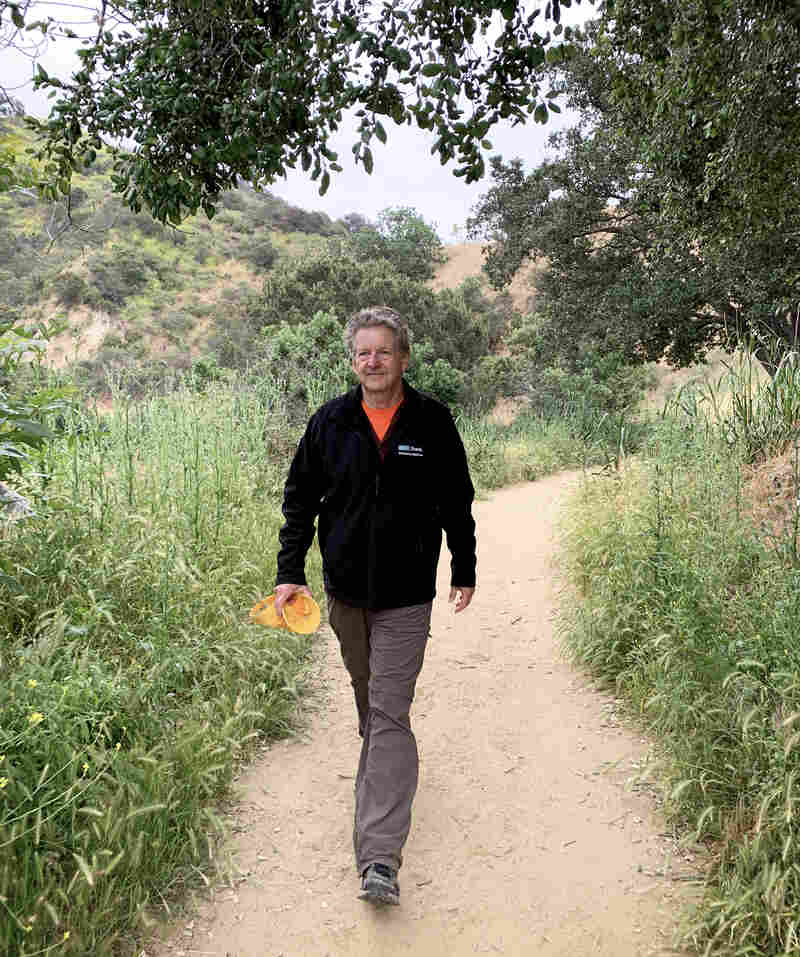 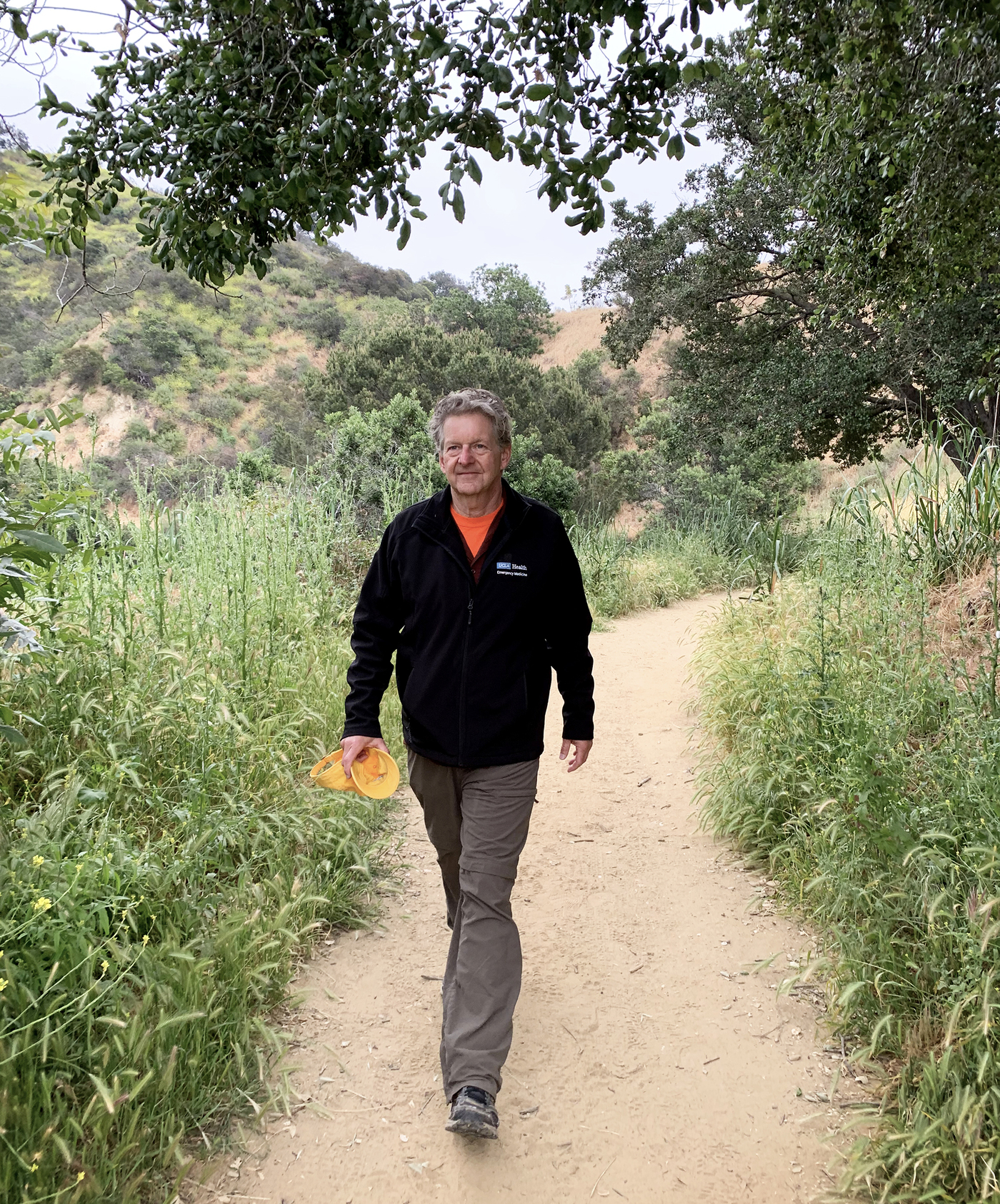 Antivenin drugs are highly effective, so if you do get bitten, get to a hospital as quickly as possible. (And hope you don't get a nasty surprise from your insurance company.)

The antivenin (also called antivenom) snaps itself like a magnet to the molecules of snake venom and then allows the body to excrete it when urinating. So patients receive lots of fluids along with the antivenin.

And if your dog gets bitten, the best thing to do is carry the pup to the vet as quickly as possible. There is antivenin treatment for dogs too.

Getting bitten by a snake is like getting a shot, Morocco says. The snake injects you with venom, and the harder your heart beats, the faster the venom circulates in the body. So try to stay calm or even motionless if possible to keep the venom as localized to the snake bite area as possible.

If you are bitten on the hand or arm, don't raise it above your head. Hold it across your chest, close to your heart, says Morocco. And if you have something to make into a sling to keep the arm still, do it.

If the bite is on your leg, it's best to lie down so your leg is level with, or lower than, your heart.

If it's not possible for an ambulance to reach you, you do need to get to medical treatment as quickly as possible. "If you have to walk or hop out, do it," Morocco says.

And here's some bottom-line advice for what to do if you are waiting for the ambulance or emergency medical technician: "Don't do anything you see in the movies or on TV," Morocco says. "No tourniquets, no cutting an X on the wound and trying to suck out the venom." He says those methods don't have any effect on the outcome of snake bites and can even make them worse.