Accessibility links
Civica Rx To Launch With Vancomycin And Daptomycin : Shots - Health News Civica Rx has plans to become an alternative source of generic drugs at reasonable prices for hospitals. The company's first medicines will be the antibiotics vancomycin and daptomycin. 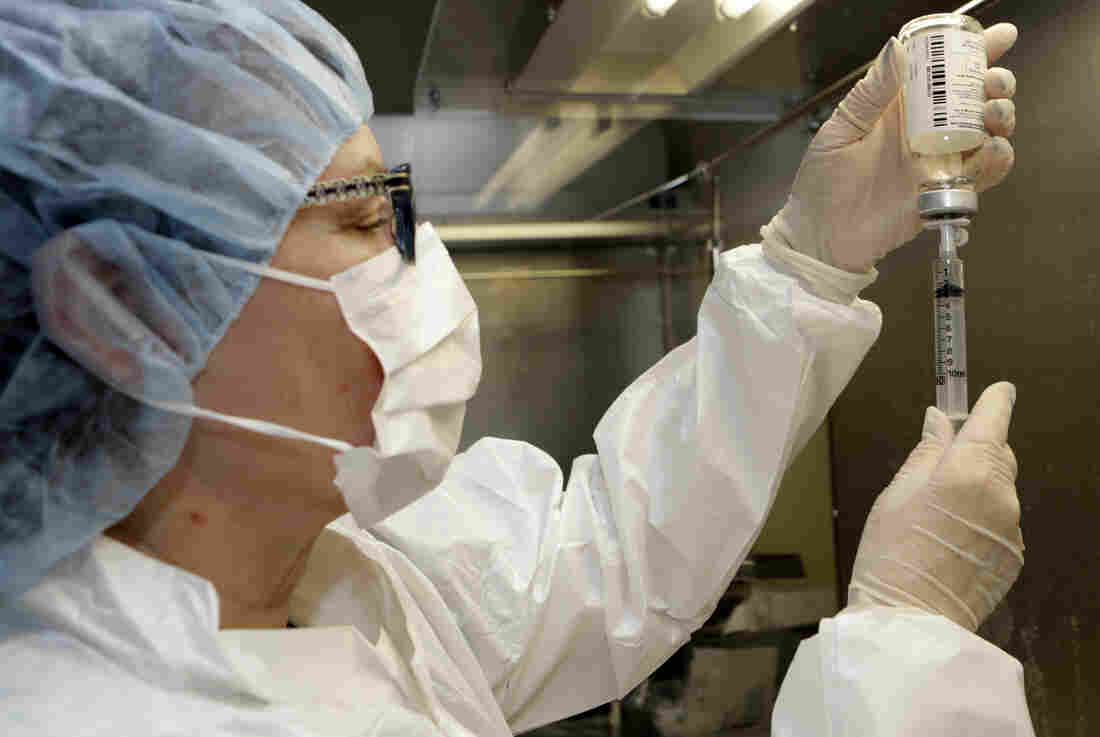 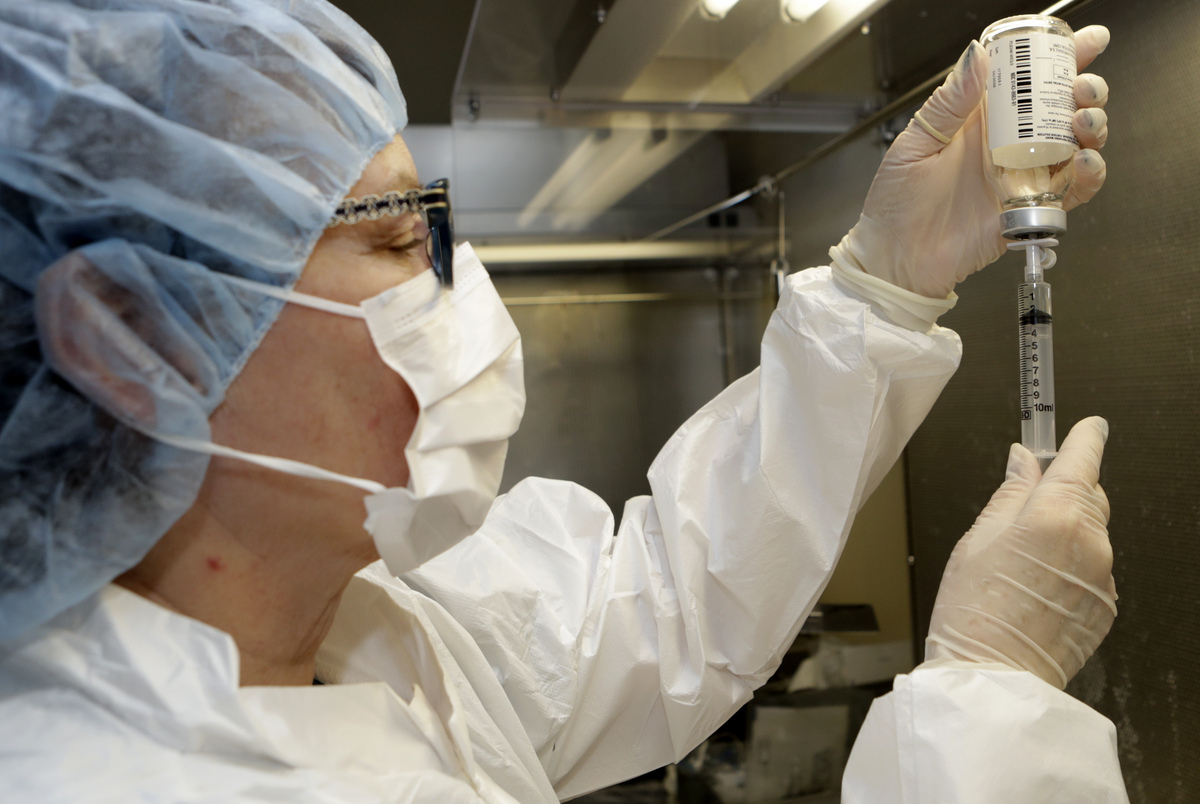 Pharmacy technician Peggy Gillespie fills a syringe with an antibiotic at ProMedica Toledo Hospital in Toledo, Ohio, in January.

On Wednesday, Civica Rx, a nonprofit drug company founded last year by a consortium of hospitals and foundations, said it had entered an agreement with a Danish drugmaker to make available injected forms of vancomycin and daptomycin, two antibiotics that are often in short supply.

Civica Rx has plans to become an alternative source of generic drugs for hospitals and provide a steady supply of critical medicines at reasonable prices .

The company's initial plan is to make 14 drugs and offer them to member health systems. The antibiotics are the first two that Civica Rx has publicly announced.

"Vancomycin is kind of the typical shortage drug because it's generic and it's an injectable and it's critically needed," says Erin Fox, a pharmacist who studies drug shortages at University of Utah Health, one of Civica Rx's members. "But we just haven't had a very good routine supply of it for a while now," she explains. She also recently joined Civica Rx's advisory board.

When the heavy-duty antibiotic vancomycin is in short supply, Dr. James Augustine, an emergency physician at Mercy Health hospitals in Cincinnati, gets worried.

"Vancomycin has been our last-ditch antibiotic for quite a few years," Augustine says. "It is our go-to antibiotic for very, very sick people and those with resistant infections."

Augustine collects information on drug shortages and shares it with other health care professional across the country. Shortages of key drug are a big and persistent problem for hospitals, he says.

"We have experienced shortages of most every drug," he says. "It's getting hard to keep track," Augustine says. In a survey last year of emergency physicians, 9 in 10 had experienced a shortage in the previous month.

Shortages of vancomycin are a particular problem because it's a powerful medicine that doesn't have a good alternative, he says.

It's unclear why vancomycin, which has been a generic for many years, has experienced shortages, says University of Utah's Fox.

"Sometimes it's just some kind of a supply constraint, or one company discontinuing production," she says. "But we don't always know the reasons for shortages. The companies won't won't tell us. In fact, pharma companies, while they're required to report a shortage to the [Food and Drug Administration] FDA, they're actually not required to provide the reason for that shortage to the FDA."

Neither vancomycin, whose name comes from the same root as vanquish, nor daptomycin drug is on the FDA's list of drugs in short supply, but they both are on another drug shortage list that Fox helps manage, along with the reasons why, if available. Drug giant Pfizer, for example, lists shortages for both drugs because of "manufacturing delays."

Civica Rx won't be making these drugs itself. Instead it has contracted with Danish drugmaker Xellia to make them with a Civica Rx label. Civica Rx's member health systems currently include 800 hospitals across the country.

Fox says the real innovation here is a new kind of contract between drugmakers and hospitals.

"You can pretty much predict how much product you're going to need at your hospital, and you can say, 'Yep, I will purchase, say, 500 packages of this in a year," she explains. "You would have to sign up for that and say, 'I'm going to buy that,' and if you don't, the company still gets the money."

That "guaranteed volume" for Civica Rx is supposed to help with the periodic shortages.

How much will the Civica Rx drugs cost? "Pricing will vary based on product,"company spokesperson Debbi Ford said in an email. She declined to provide specific prices.

Vancomycin "right now is a fairly reasonable price," says Martin VanTrieste, Civica's president and CEO. "However daptomycin is one of those high-priced drugs, and we'll be able to bring [it at] a significantly lower price."

VanTrieste says Civica's pricing will be based on manufacturing costs, plus a "fair margin" for the drugmaker — in this case, Xellia. "Once we negotiate that price, we go back to our members and say, 'I have vancomycin 1-gram vials I'm offering to you at "X" price. You want to opt in to purchase that product or opt out?' "

Dr. James Augustine's health system, Mercy Health, isn't a Civica Rx member, although membership is open. It costs $300 per hospital bed to join, according to VanTrieste.

Augustine is encouraged by what Civica Rx is trying to do. "It's a fabulous idea," he says.

But the company's existence underscores for him that up until now, generic drugmakers have failed patients and providers. "They have decided not to make a reliable source of these medicines available and where possible to jack up the prices to to incredible levels," he said. "It's disgusting."

"We always support additional competition to the market," said Rachel Schwartz, a spokesperson for the Association for Accessible Medicines, a trade group for generic drugmakers, in an email.

Civica Rx's VanTrieste expects to be able to offer the two antibiotics to member health systems this summer.

That's when the experiment to prevent drug shortages and bring down prices will be put to a real-world test.