Accessibility links
Highly Potent Weed: What We Know About The Health Effects : Shots - Health News Most of the marijuana for sale in the U.S. has a far higher THC content than it did a few decades ago. Some scientists and doctors are concerned that the trend is making pot less safe. 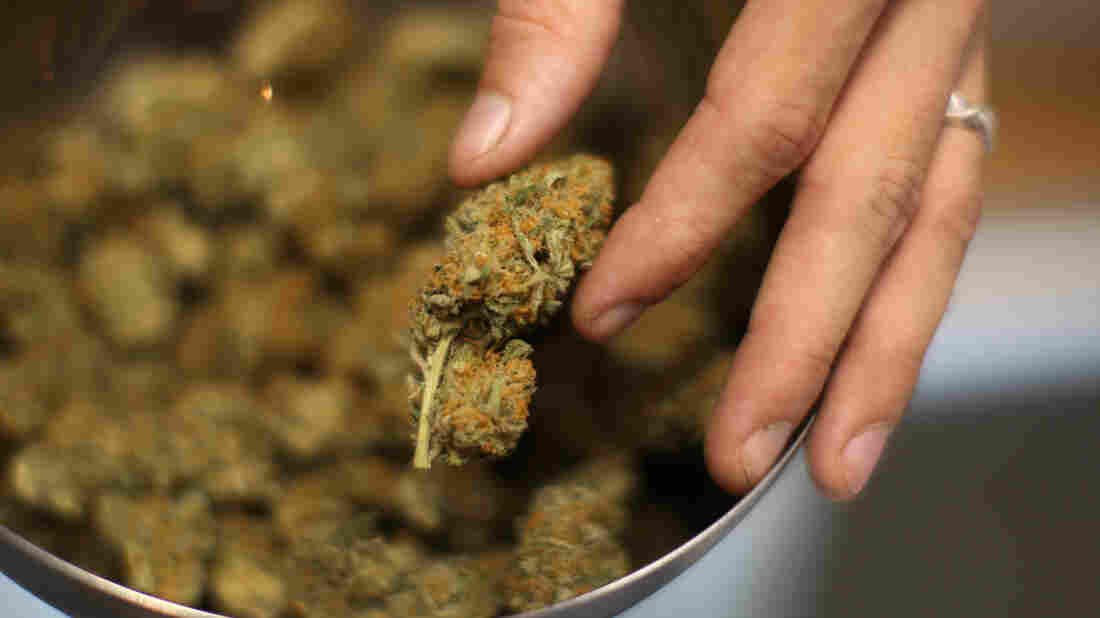 Studies have shown that the levels of THC, the main psychoactive compound in pot, rose dramatically in the U.S. from 1995 to 2017. David McNew/Getty Images hide caption 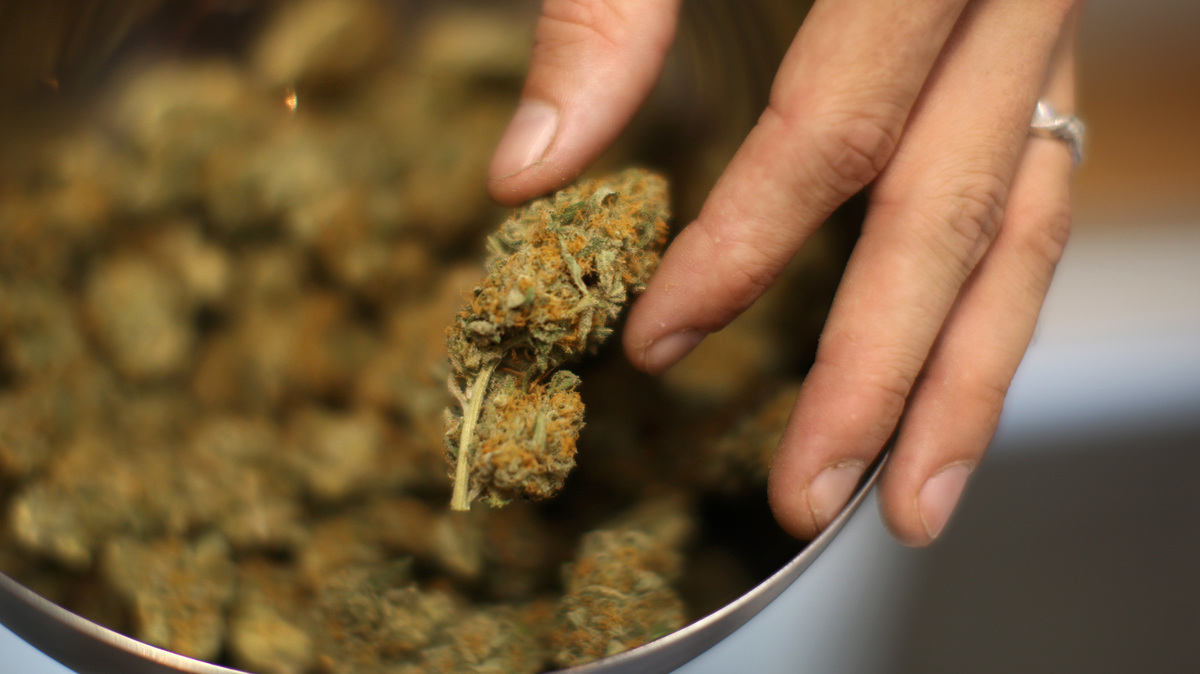 Studies have shown that the levels of THC, the main psychoactive compound in pot, rose dramatically in the U.S. from 1995 to 2017.

As more states legalize marijuana, more people in the U.S. are buying and using weed — and the kind of weed they can buy has become much stronger.

That concerns scientists who study marijuana and its effects on the body, as well as emergency room doctors who say they're starting to see more patients who come into the ER with weed-associated issues.

Some 26 million Americans ages 12 and older reported being current marijuana users in 2017, according to the National Survey on Drug Use and Health. It's not clear how many users have had serious health issues from strong weed, and there's a lot that's still unknown about the potential risks. But scientists are starting to learn more about some of them.

The potency of weed depends on the amount of delta-9-tetrahydrocannabinol, or THC, the main compound responsible for the drug's psychoactive effects. One study of pot products seized by the U.S. Drug Enforcement Administration found the potency increased from about 4% THC in 1995 to about 12% in 2014. By 2017, another study showed, the potency of illicit drug samples had gone up to 17.1% THC.

"That's an increase of more than 300% from 1995 to about 2017," says Staci Gruber, director of the Marijuana Investigations for Neuroscientific Discovery (MIND) program at the Harvard-affiliated McLean Hospital in Belmont, Mass. "I would say that's a considerable increase."

And some products with concentrated forms of cannabis, like hash and hash oil, can have as much as 80% to 90% THC, she adds.

"I think most people are aware of the phenomenon that 'this is not your grand daddy's weed,' Gruber says. "I hear this all the time."

Daily Marijuana Use And Highly Potent Weed Linked To Psychosis

But people might not be aware of the potential health risks of highly potent weed. "The negative effects of cannabis have primarily been isolated and localized to THC," says Gruber. "So it stands to reason that higher levels of THC may in fact confer a greater risk for negative outcome."

"In general, people think, 'Oh, I don't have to worry about marijuana. It's a safe drug,' " says Nora Volkow, director of the National Institute on Drug Abuse. "The notion that it is completely safe drug is incorrect when you start to address the consequences of this very high content of 9THC."

THC can have opposite effects on our bodies at high and low doses, Volkow says. Take anxiety levels, for example.

"When someone takes marijuana at a low [THC] content to relax and to stone out, actually, it decreases your anxiety," she says. But high concentrations can cause panic attacks, and if someone consumes high-enough levels of THC, "you become full-blown psychotic and paranoid."

Weed can have a similar paradoxical effect on the vascular system. Volkow says: "If you take low-content THC it will increase your blood flow, but high content [THC] can produce massive vasoconstriction, it decreases the flow through the vessels."

And at low concentrations, THC can be used to treat nausea in cancer patients undergoing chemotherapy. But Volkow says that "patients that consume high content THC chronically came to the emergency department with a syndrome where they couldn't stop vomiting and with intense abdominal pain."

"The typical patient uses [inhales] about 10 times per day ... and they come in with really difficult to treat nausea and vomiting," says Andrew Monte, an associate professor of emergency medicine and medical toxicology at the University of Colorado's school of medicine. "Some people have died from this ... syndrome, so that is concerning."

Scientists don't know exactly how high levels of THC can trigger the syndrome, but the only known treatment is stopping cannabis use.

While the number of people who've had the syndrome is small, Monte says he and his colleagues have documented a rise in the number of cases at emergency rooms in Colorado since marijuana was legalized there five years ago. A study by Monte and his team found that cyclical vomiting cases made up about 18% of inhaled cannabis-related cases at his ER.

They also found that statewide, the overall number of ER cases associated with cannabis use has gone up. And Monte says his ER has "seen an approximately a three-fold increase in emergency department visits just by frequency. It doesn't mean we're getting overwhelmed by these visits due to cannabis, it's just that means that there are more patients overall."

Most people show up at his emergency department because of "intoxication" from too much pot, either straight or mixed with other drugs, Monte says. The bulk of these cases are due to inhaled cannabis, though edibles are associated with more psychiatric visits.

"We're seeing an increase in psychosis and hallucinations, as well as anxiety and even depression and suicidality," Monte says.

He thinks the increased potency of marijuana plays a role in all these cases. "Whenever you have a higher dose of one of these types of drugs, the patient is at a higher risk of having an adverse drug event. If the concentration is so much higher ... it's much easier to overshoot the low-level high that they're looking for."

Not everyone is at equal risk, Monte adds. "Many many people use cannabis safely," he says. "The vast majority don't end up in our emergency department."

Some people are more vulnerable than others to the potential negative effects of high THC cannabis.

Adolescent and young adults who use recreationally are especially susceptible because their brains are still developing and are sensitive to drugs in general, says Gruber of the MIND program. In a recent review of existing studies, she found that marijuana use among adolescents affects cognition — especially memory and executive functions, which determine mental flexibility and ability to change our behavior.

Medical marijuana users can face unexpected and unwelcome effects from potent weed. "It's very important for people to understand that they may not get the response they anticipated," Gruber notes.

Studies done on the medical benefits of pot usually involve very low doses of THC, says Monte, who adds that those doses "are far lower than what people are getting in a dispensary right now."

David Dooks, a 51-year-old based in the Boston area turned to marijuana after an ankle surgery last year. "I thought that medical marijuana might be a good alternative to opioids for pain management," he says.

Based on the advice at a dispensary, David began using a variety of weed with 56.5% THC and says it only "exacerbated the nerve pain." After experimenting with a few other strains, he says, what worked for him was one with low (0.9%) THC, which eased his nerve pain.

Whether people are using recreationally or medically, patients should educate themselves as much as possible and be cautious while using, Monte says.

Avoiding higher THC products and using infrequently can also help reduce risk, Volkow adds. "Anyone who has had a bad experience, whether it's psychological or biological, they should stay away from this drug," she notes.

Ask for as much information as possible before buying. "You have to know what's in your weed," Gruber says. "Whether or not it's conventional flower that you're smoking or vaping, an edible or tincture, it's very important to know what's in it."

And the old saying "start low, go slow," is a good rule of thumb, she adds. "You can always add, but you can never take it away. Once it's in, it's in."