Listen · 4:02 4:02
The Other Reasons Kids Aren't Getting Vaccinations: Poverty And Health Care Access 4:02 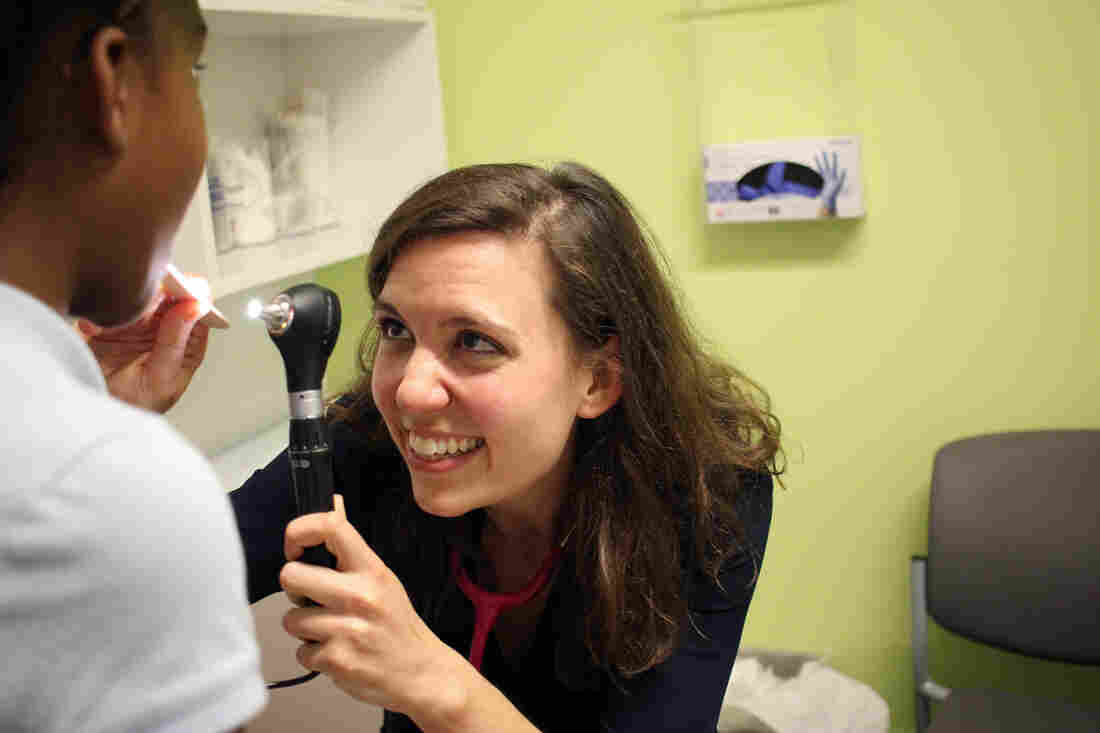 Public health experts suggest every doctor visit is an opportunity to vaccinate. Dr. Melanie Siefman examines an 11-year-old patient at a Unity Health Care clinic in Washington D.C. who came in for allergies, and ended up getting three vaccinations. Selena Simmons-Duffin/NPR hide caption 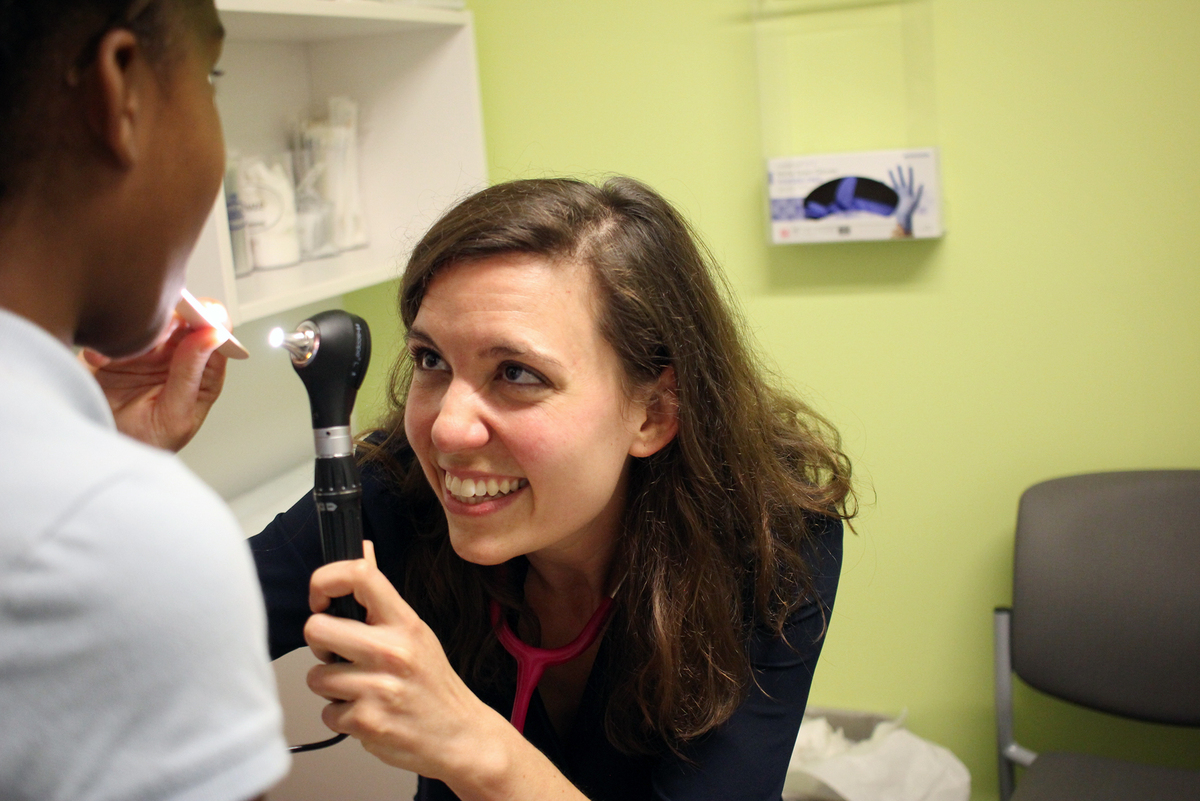 Public health experts suggest every doctor visit is an opportunity to vaccinate. Dr. Melanie Siefman examines an 11-year-old patient at a Unity Health Care clinic in Washington D.C. who came in for allergies, and ended up getting three vaccinations.

The toddler looking up at Dr. Melanie Seifman in her Washington, D.C., exam room seems a little dazed.

It could be because she just woke up from a nap at daycare. It could be that she remembers the shots she got last time, and she knows what's coming.

The little girl is catching up on some vaccines she's behind on: missing doses of the DTaP and polio vaccines. She's over two years old — both of those shots are supposed to happen at a baby's six-month check up.

"It happens a lot," Siefman says. The Unity Health Care clinic, where Siefman practices, serves mostly low-income, mostly African-American patients. She says her patients often miss vaccinations because of struggles in their parents' lives. The reasons include: "transportation, couldn't get off work, didn't have insurance and didn't know that they could come in without insurance."

During this recent measles outbreak, there's been a lot of discussion about the religious and ideological reasons behind low vaccination rates, especially in places like Washington state and New York.

But sometimes the reasons why a kid is not up-to-date on their vaccines has more to do with poverty and access to health care than a parent's vaccine hesitancy.

"Luckily — knock on wood — we have not had a measles outbreak in D.C. and I hope that we don't," Siefman says.

In fact, the measles vaccination rate in D.C. for kindergartners is only 81% — lower than all 50 states. If Washington were to have an outbreak, Siefman says, "based on my population, it would be more because of just inadequate vaccination because they're just not coming in, and not because of the anti-vaccine group, just because I don't see so many of those kids."

Dr. Holly Hill, a medical officer and epidemiologist at the Centers for Disease Control and Prevention, says that rate in the District is "definitely lower than we'd like to see."

"We really look for at the very least 90% — hopefully more like 95% — to prevent outbreaks, especially with measles because it's so infectious," she says.

Data from the CDC shows the connection between poverty and vaccination rates bears out nationally.

For instance, CDC data shows that in 2017 only 75% of uninsured children age 19 to 35 months had gotten at least one dose of MMR, the vaccine for measles. That compares to 94% of privately insured children, and 90% of those on Medicaid.

Insurance is not supposed to be a barrier to vaccination. There's a federally funded program started in the 1990s called Vaccines for Children that provides free vaccines to children who are uninsured or on Medicaid. The CDC's Hill says the agency needs to look at the program and "find ways to make it work better for more kids."

Hill co-authored a CDC study published online in 2016 that examined which specific factors related to poverty correlated to whether children were up-to-date on their vaccines or not. Up-to-date children "tended to live in households with fewer children, higher incomes and less mobility, compared to children who were not [up-to-date]."

When it comes to mobility, it can be challenging for doctors to piece together vaccination histories for children whose families move a lot, the paper concludes.

Dr. Melanie Siefman runs into this problem all the time. She has access to D.C.'s vaccination records, and her own clinic's records, but that's it.

"I see kids who show up, they've never been to our clinic before, and they were previously in Texas or they were in Maryland," she explains. "So it leaves me guessing. I have no idea where you're at with your vaccine status. Do I vaccinate you thinking you haven't got them? Do I hold off and try and get your records, which may or may not make it — just fax machines and things?"

Many times, she decides to assume the child hasn't had any and start from scratch. She says that's safe to do, but it takes months. "You have to bring them in very regularly to catch them up on a lot of missed vaccines," she says.

When it comes to the measles outbreak, Siefman is concerned about the potential for that first case coming into the clinic. She's talked to clinic staff about what to look out for. 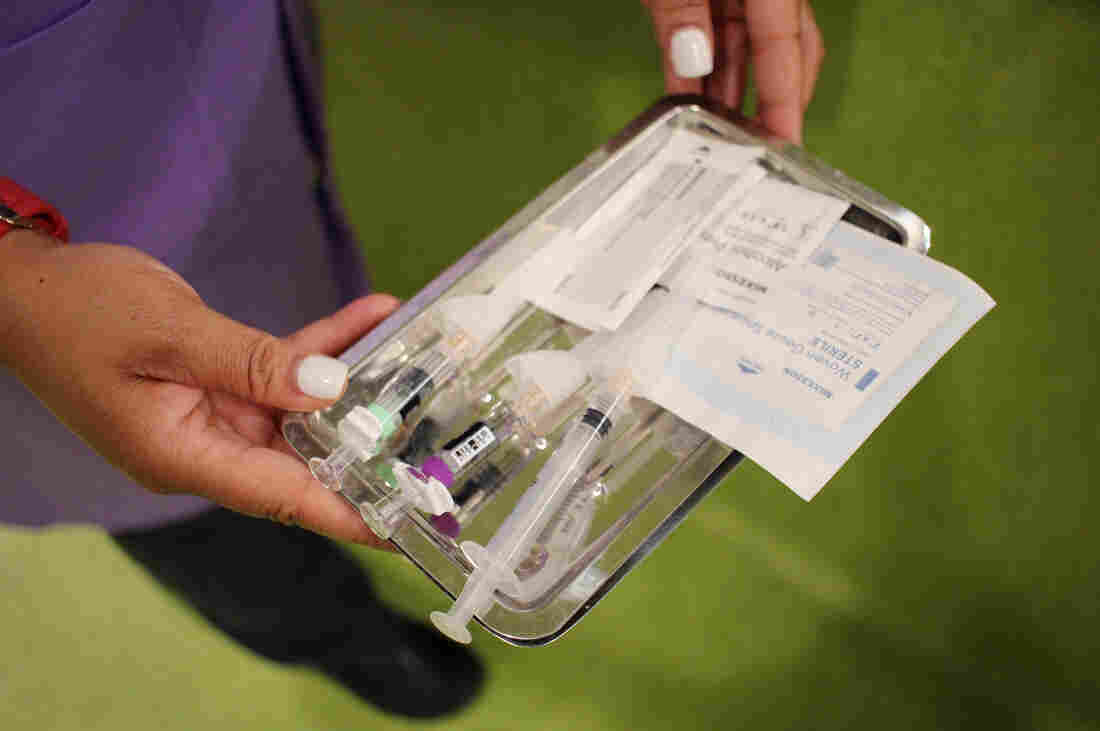 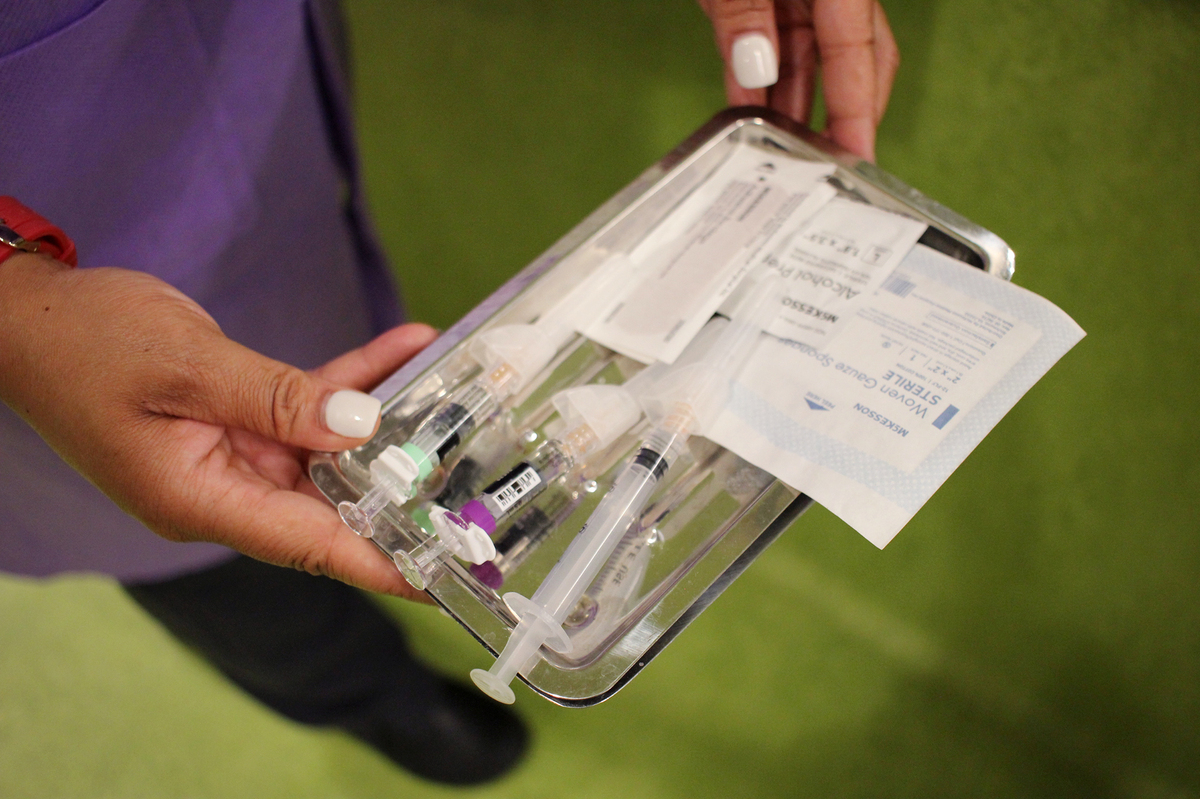 Band-aid at the ready, Sara McRae, a medical assistant at Unity Health Care, heads in to vaccinate a pediatric patient.

There are reasons to be worried. There's the city's low measles vaccination rate before kindergarten. And, as the nation's capital, a lot of travelers come through town. There have been cases in Maryland, not many miles away.

Dr. Anjuli Talwalker, senior deputy director at the District's department of health, says for all these reasons, the department is "on alert."

She does note the measles vaccination coverage for school age kids in general is higher than for kindergartners. In D.C. it's around 92%. She thinks that a better proxy for how well a community is protected. Nonetheless, they're working to get kids up-to-date on measles and all their other required vaccinations.

"Our standard practice is to identify children who are overdue for any of their vaccinations," she says. They generally reach out to families through schools. "We have form letters that go to the families that say your child is due for X, Y, Z vaccines. Please go to her provider."

They also provide information about local health care providers with their hours of operation and phone numbers.

"We also recently sent a letter to principals specifically about measles," she says. "We continue to have messaging on our website and through social media."

Now, they're focusing on trying to get the word out to schools and families in these last weeks before summer vacation, and they have a message for doctors.

"Even if a child goes to the doctor not for their vaccine, you take that as an opportunity to vaccinate," Talwalker says.

Dr. Siefman at Unity Health Care is on top of that.

An 11-year-old patient came in because a new pet was causing allergies. She ended up getting three vaccines.