Accessibility links
Day-To-Day Financial Insecurity A Burden For People In Rural Communities : Shots - Health News A new poll from NPR, Harvard and the Robert Wood Johnson Foundation gives a glimpse into rural life in America today, finding that many people living in rural communities live on the edge financially. 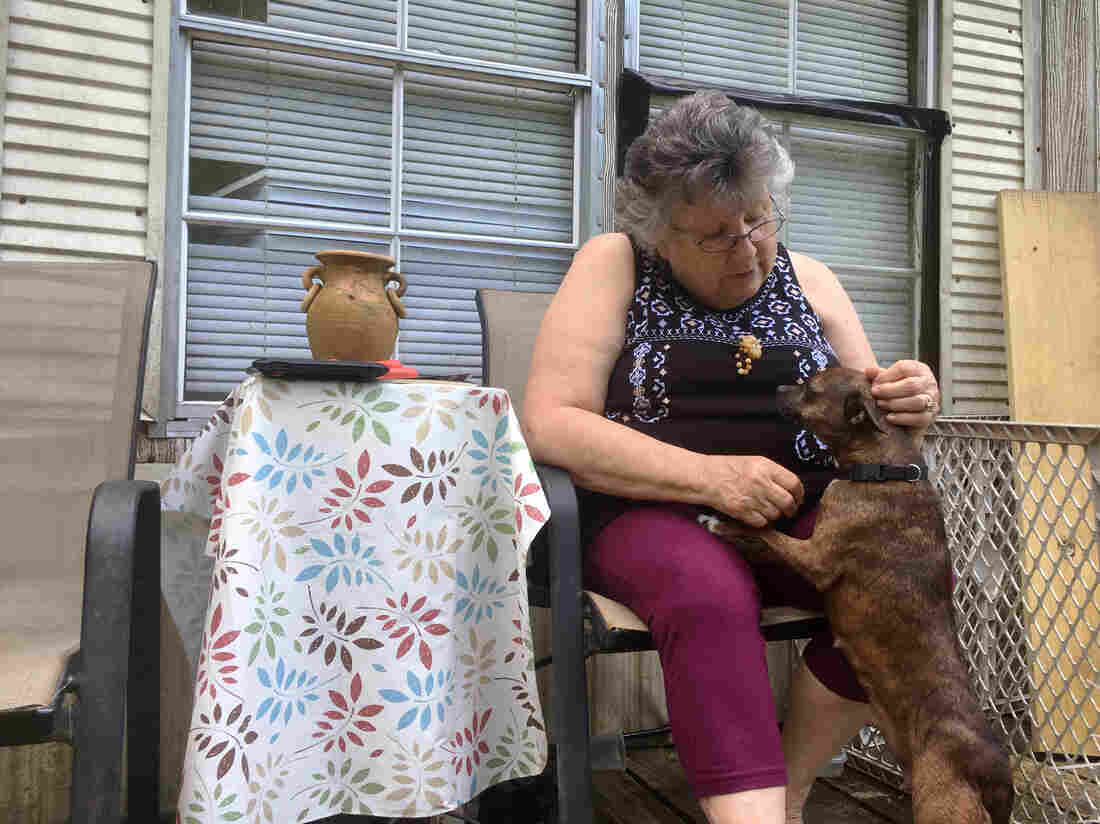 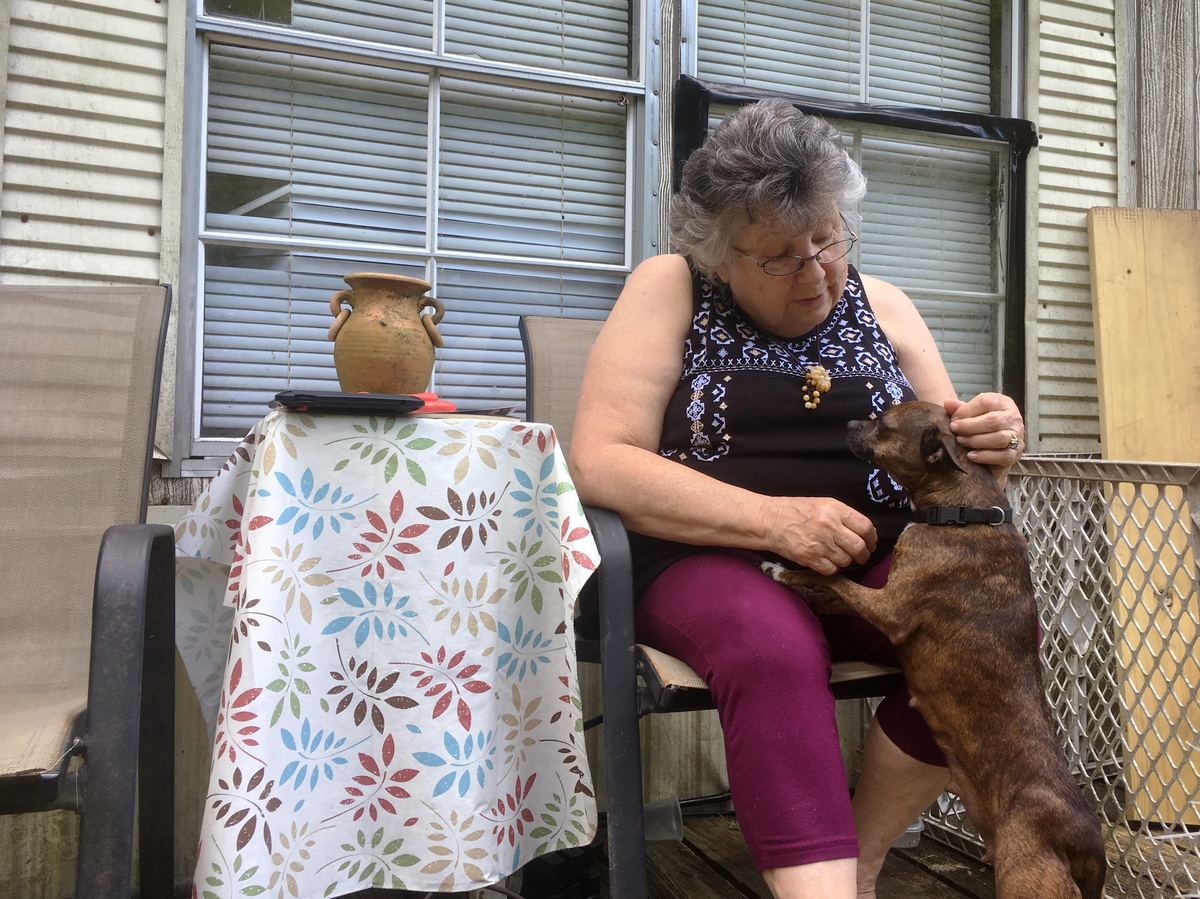 Leitha Dollarhyde, a retired caregiver who lives in a rural town near Whitesburg, Ky., says she could not afford an unexpected $1,000 expense.

Polling by NPR finds that while rural Americans are mostly satisfied with life, there is a strong undercurrent of financial insecurity that can create very serious problems for many people living in rural communities.

The findings come from two surveys NPR has done with the Robert Wood Johnson Foundation and the Harvard T.H. Chan School of Public Health on day-to-day life and health in rural America.

After a major poll we did last fall found that a majority (55%) of rural Americans rate their local economy as only fair or poor, we undertook a second survey early this year to find out more about economic insecurity and health. The poll looked beyond the known factors of job loss and the decades-long flight of young people to more urban areas.

Several findings stand out: A substantial number (40%) of rural Americans struggle with routine medical bills, food and housing. And about half (49%) say they could not afford to pay an unexpected $1,000 expense of any type.

One-quarter of respondents (26%) said they have not been able to get health care when they needed it at some point in recent years. That's despite the fact that nearly 9 in 10 (87%) have health insurance of some sort — a level of coverage that is higher now than a decade ago, in large part owing to the Affordable Care Act and the expansion of Medicaid in many states.

"At a time when we thought we had made major progress in reducing barriers to needed health care, the fact that 1 in 4 still face these barriers is an issue of national concern," says Robert J. Blendon, co-director of the survey and professor of health policy and political analysis at the Harvard T.H. Chan School of Public Health. "Either it is still not affordable for them or the insurance they have doesn't work — or they can't get care from the health providers that are in their community."

Of those not able to get health care when they needed it, the poll found that 45% could not afford it, 23% said the health care location was too far or difficult to get to, and 22% could not get an appointment during the hours needed.

Dee Davis, president and founder of the Center for Rural Strategies in Whitesburg, Ky., says poverty and ill health are endemic where he lives. "People in this congressional district have the shortest life span in the United States; we also are the poorest," Davis says. "We're poor and we're sicker."

But, he adds, the Affordable Care Act — which in Kentucky brought an expansion of Medicaid to many previously uninsured residents — went a long way in helping many rural communities take care of recurring problems. "We're not out of the woods yet but the ACA certainly changed the landscape," Davis says.

Lots of rural people benefited from the ACA, he adds, and if that progress were to be lost, he says: "We're in trouble."

For purposes of this poll, "rural" was defined as areas that are not part of a Metropolitan Statistical Area, as used in the 2016 National Exit Poll. The NPR poll was conducted in English and Spanish using random-digit dialing Jan. 31-March 2 among a nationally representative, probability-based sample of 1,405 adults ages 18 or older living in the rural U.S. The margin of error for the total respondents is plus or minus 3.5 percentage points at the 95% confidence level.

One measure of financial security is the ability to meet unexpected expenses like a car repair or a medical problem or fixing something that has gone wrong in the house. It's not unusual for these expenses to run $1,000 or more, so we asked whether that would be a problem.

Overall, nearly half (49%) said they wouldn't be able to afford that. And more than 6 in 10 rural black and Latinx Americans said they would have a problem paying that off (blacks, 68%; Latinx, 62%), compared with 45% of rural whites.

"When you're living close to the edge, sometimes you fall off," says Davis. "If half the people in rural America can't deal with a $1,000 bill, that's rough."

It would be an issue for 72-year-old Leitha Dollarhyde, a retired caregiver who lives near Whitesburg, Ky., a rural town of under 2,000 people. She was born about 4 miles from where she lives today.

Her answer, when asked if she could afford an unexpected $1,000 expense? "No. There's no way. My savings account is zero."

Dollarhyde worked all her life, but the jobs just didn't pay enough for her to put anything aside. She raised four children. Today her income — Social Security and Supplemental Security Income — adds up to $790 a month.

"With that income, you watch every penny," she says.

Yet even with the high levels of financial insecurity that we found, there is abundant optimism and satisfaction with the quality of life in rural America. Almost three-quarters (73%) of rural Americans rate the overall quality of life in their local community as excellent or good. And a majority (62%) are optimistic that people like them can make an impact on their local community.

Davis says that is what he observes in rural Kentucky. "People may be living a more hardscrabble existence than folks in the suburbs or a lot of the folks in cities, but it doesn't mean they're not living a decent life," he says. "Most people are pretty happy with it; they've got friends and neighbors they rely on and they're where they want to be."

Still, social isolation and loneliness are a concern in rural America. We found nearly 4 in 10 (38%) said "many people" in their community feel lonely or isolated, with almost 1 in 5 (18%) saying they "always" or "often" feel either isolated or lonely. People with disabilities (31%) more frequently said they feel lonely or isolated from others compared with those without disabilities (12%).

A majority of rural Americans say they participate in civic and social activities, including volunteering and service, political activities, community meetings and membership in a variety of groups. The most frequently cited activity was volunteering their time to an organization working to make their local community a healthier place to live (49%).

Whitesburg community activist Nell Fields says that when her husband was recently hospitalized, her neighbors were extraordinary.

"My neighbors come and mow my grass, feed cattle, get eggs every day for the last few weeks," she says. "That says so much to me. [It] makes me feel the emotion now of what it feels like to have such warm, wonderful support and I know that's the blessing of living in rural America."

Since 2010, 106 rural hospitals have closed in rural America. As many as 673 more are at risk of closure, according to a 2016 report from iVantage Health Analytics. Currently, there are approximately 1,860 rural hospitals in the U.S.

Eight percent of rural adults polled say hospitals in their local communities have closed down in the past few years. About two-thirds (67%) say the closures were a problem, including 38% who say they were a major problem.

"It means people have to travel greater distances to receive care, and distance can be a barrier to timely and appropriate access to services," says Brock Slabach of the National Rural Health Assembly in Leawood, Kan. "Delayed care can often lead to tragic consequences. This can be a huge barrier for many living in rural areas."

As an example, he points to the small town of Tonopah, Nev., population 2,478, that is more than three hours away from the nearest hospital by road. The community's hospital closed in 2015 and the ambulance service in town was left to deal with all kinds of medical problems that it is not situated to handle, Slabach says.

In areas where higher-speed Internet access is available, people are turning to telehealth instead of going to a doctor or clinic. But broadband access is a perennial issue in many parts of rural America, with 1 in 5 (21%) saying that accessing high-speed Internet is a problem for their family. Among those who do use the Internet, a majority say they do so to obtain health information (68%).