Accessibility links
Some Communities Pin Hopes For Funds On The Coming Opioid Lawsuits : Shots - Health News The pharmaceutical industry is facing hundreds of lawsuits around the country from state and local officials, who want the industry to help pay to tackle the opioid epidemic.

6:45
Cities And States Look To Big Pharma To Cover Costs Of The Opioid Epidemic 6:45 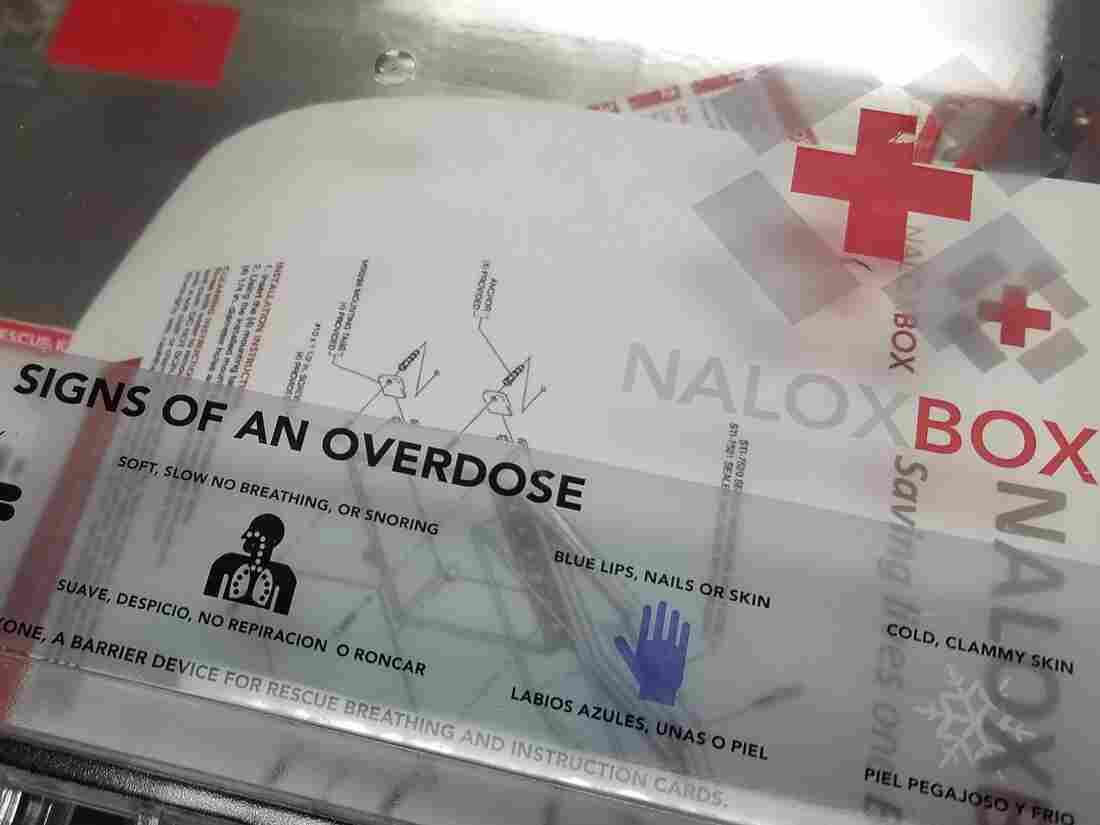 Volunteers help pay for and disseminate overdose kits, including the overdose antidote, naloxone, in Summit County, Ohio. The costs of battling the addiction crisis are a burden on many local municipalities. Brian Mann for NPR hide caption 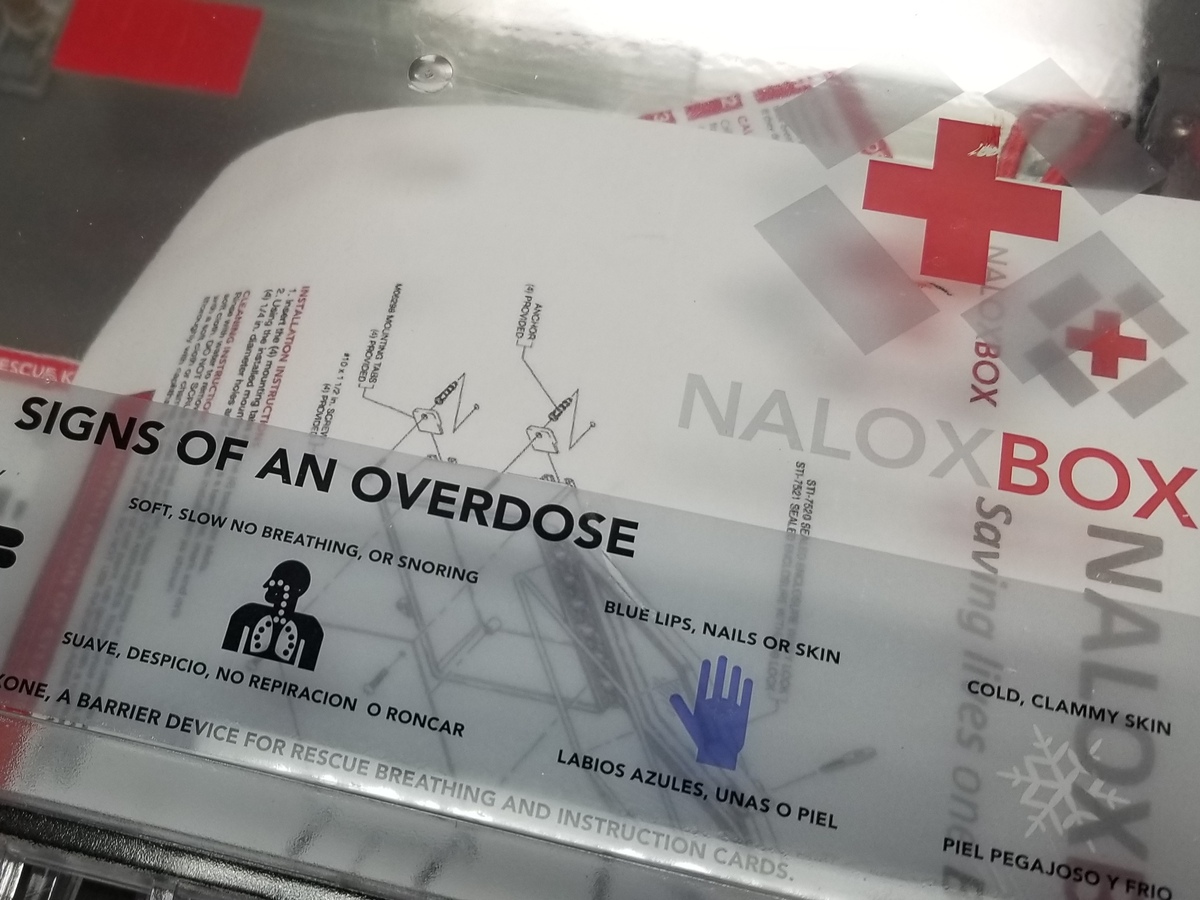 Volunteers help pay for and disseminate overdose kits, including the overdose antidote, naloxone, in Summit County, Ohio. The costs of battling the addiction crisis are a burden on many local municipalities.

As pharmaceutical companies prepare to square off with states and local communities in courts around the U.S., a growing number of state and local officials say the industry should pay to cover the cost of the nation's deadly opioid epidemic.

"I think they are as complicit in this as the dealers that are dealing on the streets and for that I think they should pay a price," says Gerald Craig, executive director of the Alcohol, Drug Addiction and Mental Health Board in Summit County, Ohio. That county is involved in a lawsuit against drugmakers that's slated to go to trial later this year.

A first test case begins this week in Oklahoma, a trial that will test the limits of the drug industry's liability. Two of the defendants have already settled claims with state officials there. Purdue Pharma agreed to pay $270 million back in March and this week, Teva Pharmaceuticals settled for a $85 million payment.

The trial will go forward against the only remaining defendant, Johnson & Johnson, the nation's biggest drug-maker. In legal filings last week, the company argued that it sold only small amounts of opioids in Oklahoma and bears no responsibility for opioid overdoses in that state.

This is one many lawsuits in jurisdictions across the country. In Cleveland, Ohio, a judge is overseeing hundreds of lawsuits filed against manufacturers and distributors of opioids by local municipalities. The first of several trials is planned for October, according to the Associated Press.

These cases come at a time when opioid addiction continues to claim thousands of lives across the country. And local and regional leaders tackling the problems brought by addiction struggle to do so with insufficient resources.

Local officials say they deserve big payouts because they have faced the brunt of an epidemic that began when companies began marketing highly addictive opioid medications in the 1990s. They argue that that drugmakers and distributors made misleading claims about the safety of their drugs.

Excessive prescribing of these medications led to record numbers of people consuming opioids, fueling soaring levels of addiction and overdose deaths. When the legal supply started to dry up, desperate people turned to the black market, buying heroin often laced with deadly synthetics like fentanyl.

According to the Centers for Disease Control and Prevention, more than 200,000 Americans died from overdoses linked to prescription opioids from 1999 to 2017.

In Ohio, the numbers are particularly bad, with some of the highest year-over-year overdose increases of any state. "We had 340 overdose deaths [in 2016] in Summit County alone," says Craig. "Our overdoses went from three a day to over twelve a day."

A dearth of funds on the ground

So far, most of the resources to respond to the crisis have come from local taxpayers and nonprofit donations. Many places have had to cobble together sources of funds to meet the growing demands of the epidemic.

In Summit County, Ohio, alone, taxpayers have paid out roughly $70 million dollars to tackle the problem.

"We had no cash on hand," says Donna Skoda, chair of the county's health department. "We had to start looking for grants."

Funding is needed for a wide range of services to help individuals and communities affected by addiction to opioids.

Skoda points to the rapid expansion of foster care in Summit County — a growing number of children have ended up in foster care in recent years around the country, largely due to the opioid crisis.

"The number of children they've had to take [in] for safety reasons, it's just doubled, not to mention the children who've been orphaned," says Skoda.

It's not just the county facing new budget pressure. Dozens of organizations have found themselves responding to the epidemic, including schools, police departments, courts, non-profit groups and hospitals. "We knew we had to do something different," says Dr. Michael Hughes at Summa Health Hospital in Barberton, Ohio.

"There was no place in this community where you could call and say, 'I need treatment.' It was a three to nine-day wait," he says.

In order to prevent people from relapsing, the hospital launched a pilot program last year inviting anyone suffering from opioid addiction to come to the emergency room. The project cost half a million dollars a year, which the hospital didn't have. The local chapter of United Way stepped in with donations.

"It was not the plan, that's for sure," says Jim Mullen, the CEO of Summit County United Way. His organization never involved itself with addiction issues before, he notes.

"But the reality was that there was this huge epidemic happening in our community," says Mullen. "We couldn't ignore it."

His group is now spending more than $800,000 a year on local opioid recovery projects. Much of the opioid response in Summit County is happening on a shoestring, using donations, volunteers, used equipment and revenue from local property taxes.

But it's just not enough, says Craig, because people are still dying. "We're still in the midst of this crisis. We want to be proud of how the community has reacted to this but at the same time we just know that we have so much more to do."

Craig says if money does come to Summit County from the lawsuit against Purdue Pharma and other drug companies, he has a wish list ready for new projects that could help people addicted to opioids rebuild their lives, including job training and long-term housing for people in recovery.

If trials now getting underway around the U.S. find the industry liable, payouts could escalate quickly into billions of dollars.