Accessibility links
A Mental Health 'Epidemic' Among College Students And Their Parents : Shots - Health News Anthony Rostain and B. Janet Hibbs say college students today face an "inordinate amount of anxiety" — but parents can help their kids cope. Their book is The Stressed Years of Their Lives. 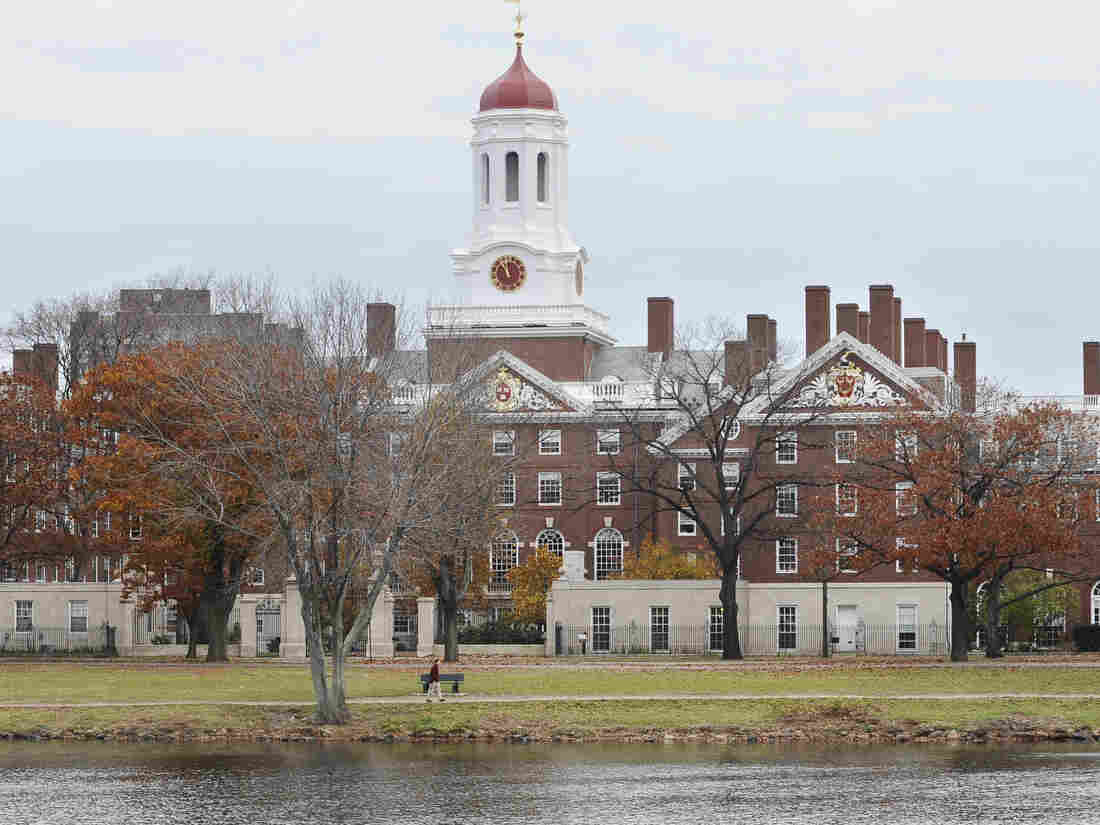 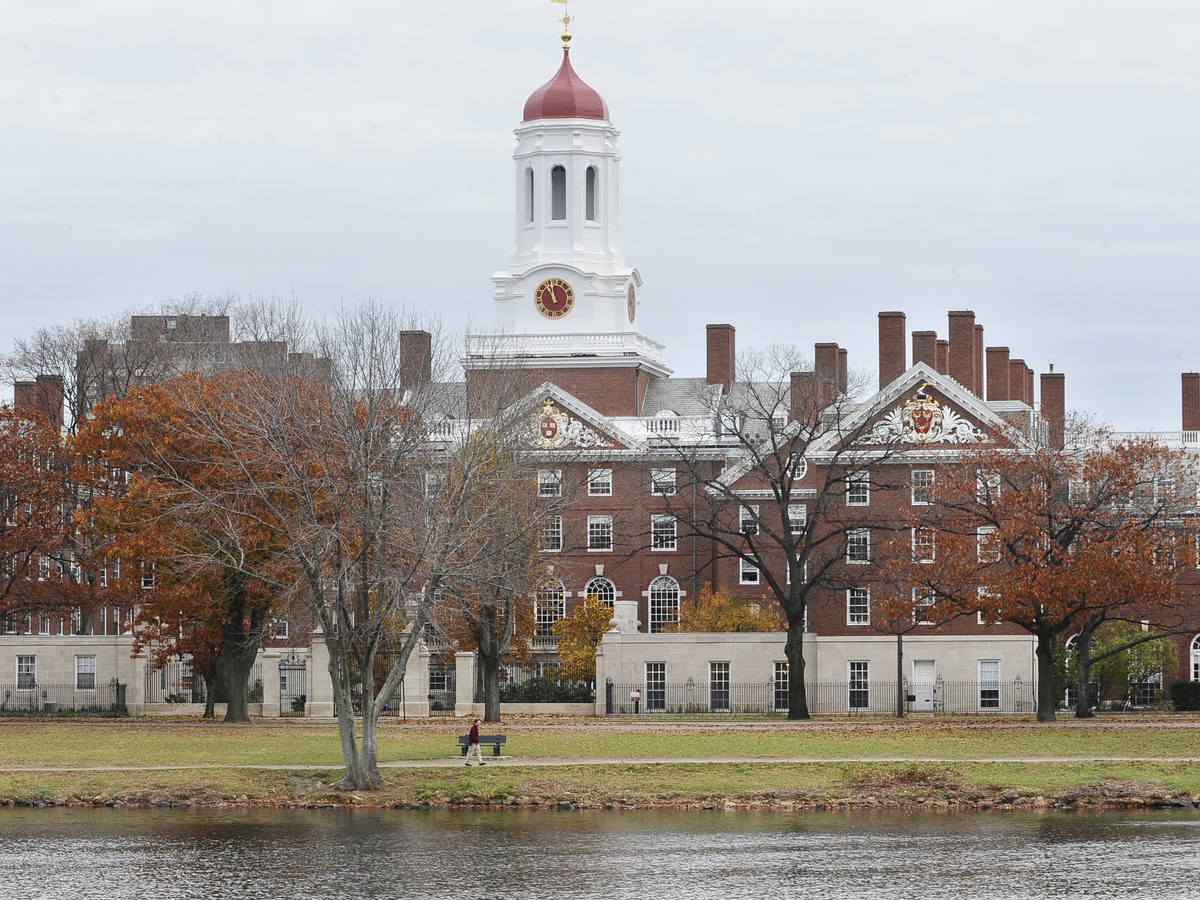 A file photo shows the campus of Harvard University in Cambridge, Mass. Dr. Anthony Rostain, co-author of The Stressed Years of Their Lives, says today's college students are experiencing an "inordinate amount of anxiety."

As colleges and universities across the country report an explosion of mental health problems, a new book argues that college life may be more stressful than ever. Dr. Anthony Rostain, co-author of The Stressed Years of Their Lives, notes that today's college students are experiencing an "inordinate amount of anxiety" — much of it centered on "surviving college and doing well."

"What we're seeing now are growing numbers of students coming [onto] campus who are already being treated for mental illness, or who are on various medications and who really have learned to manage their illnesses at home," he says, "but suddenly they're on their own and sometimes they're not following through [with] their own recommended treatments."

Rostain is a professor of psychiatry and pediatrics at the Perelman School of Medicine at the University of Pennsylvania, and the former chair of the school's Task Force on Student Psychological Health and Welfare. His co-author, B. Janet Hibbs, is a family and couples psychotherapist whose son took a medical leave of absence during his first college spring break to deal with anxiety and depression. Hibbs faced a difficult set of choices: she wanted to best parent her son as he struggled, but she also wanted his life to stay on track.

"One of the reasons we wrote this book is not to scare parents, but to help them know what they can do to help," she says. "When a child, for whatever reason, is hopeless or verging on that, families are incredibly, vitally important in maintaining hope. ... Having the emotional expression of the family convey warmth, support, unconditional support, not judgment, that ... is one of the best medicines." 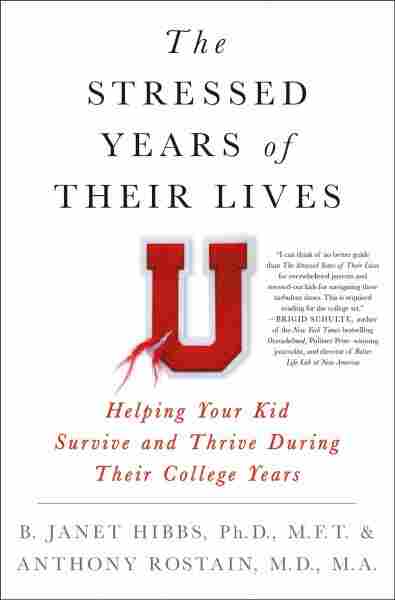 The Stressed Years of Their Lives

Helping Your Kid Survive and Thrive During Their College Years

by B. Janet Hibbs and Anthony Rostain

Title
The Stressed Years of Their Lives
Subtitle
Helping Your Kid Survive and Thrive During Their College Years
Author
B. Janet Hibbs and Anthony Rostain

On why current college students are more stressed than previous generations

Rostain: We think that the culture has changed in the last 30, 40 years, and that these students are growing up in the post-9/11 era, that they've been exposed to a lot of trauma, both in the media and also in their lives. ... School shootings, the rise in the uncertainty from globalization and the economic uncertainties, and of course the economic recession of 2008. Our students today were young then, and the anxiety, we think, really had an impact on their families, as well as on what they could glean from the news. And, of course, being in this 24/7 news cycle as well as the Internet itself, has really created a different childhood.

Hibbs: Parents are scared that there's only one path, a linear path, to the good life, and so for some parents who are affluent enough, that means the brand-name college, or the top prep that you can get. For other parents, it's just a lot of pressure on the kids, "You have to do well. You can't make a mistake or your chances will be ruined." So we see especially very smart kids, which some researchers call brainiacs, they have what we call "destructive perfectionism"; they cannot tolerate not excelling at everything. And no one typically excels at everything. We all have, you know, times when we both make mistakes or fail. And kids don't have as much practice at that today, because they're protected from having those experiences, and also it freaks their parents out, which makes then the kids feel more responsible.

On how high tuition is contributing to stress

Rostain: Students come to school nowadays very conscious of that ... and that adds to their burden of worry about doing well and especially about anything going wrong. I mean, we can also talk, I think, about the preparation for school — that many of them have been over-parented and also over-prepared, in terms of taking tons of AP classes and really packing their CVs with all kinds of activities. And we worry that there is not enough downtime ... [to do things that are] not going to necessarily always result in a grade or in someone noticing them.

On why some students have trouble adjusting to college

Hibbs: I think most kids are still really happy to leave home. They want to be in the life of the pseudo-adult. But what they're unprepared for are what I would call ... the "expectable challenges" that college poses — in terms of the requirement for more independence, more ownership of your hours, whether it's sleep, saying no to partying, managing yourself, basically.

Rostain: There's a certain amount of inevitable anxiety about the transition. ... But it's the response that they're having to that uncertainty that we've noticed students have a lot less resilience or preparation [for]. So that's part of what we're trying to do in this book is really talk about readiness — social-emotional readiness.

There's no question people are academically prepared. They're learning an incredible amount nowadays in school. They're learning amazing kinds of things, and the Internet has opened up knowledge that was never as available. But it's also created distractions and a lot of pressure socially and, more importantly, I think, when people get to college, maybe not enough time has been spent in high school — both in the curricular side and with the family — in what we call social-emotional readiness, or maturity.

On the cost of pushing kids too hard

Rostain: We're giving our kids everything we have and we care about them, but at the same time, what's the message? It's, "Oh you need to succeed or else we're going to really get upset," as opposed to, "Life is curvy, and there are moments of ups and downs." I think if the message from a parent to a kid is, "You may not know, but we expect that you'll be able to figure it out. Let's see what happens," [that] is different than saying, "You better do this. You better know that. You better not mess up." ... We want parents to deal with their own anxiety and then [be] able to let go in a way [that] more feels more natural. It's OK to not know.

On why most students don't use counseling services

Rostain: There are some startling surveys that show that among students who endorse suicidal ideation, suicidal thoughts on a regular basis, only about one in four go for help. The other three out of four say things like, "Well, I can handle this myself," or "It's not probably not that bad," or, "I don't have time." And wishing that eventually it'll just go away on its own like a bad cold.

Now, it may be true that for some students, they're able to plow through and avoid disaster. But what ... I have seen too often is [students] waiting too long to acknowledge and in a way staying in that state of denial. Not because you're deliberately doing so, but because you really don't want to have to face maybe having to take care of this. Or even worse, maybe having to leave school because you just can't function. You're so much a part of a community when you're in college. ... The thought that, "Gee, I can't function anymore and I may need to take a break" — that's a hard pill to swallow, so to speak.

Rostain: I think growing up is a complicated process, and we all have to recognize that we're all still going through changes. So parents have to adapt to the idea of their child growing up and of letting go. And if they're anxious about it, [parents should] try to figure out why and to be more mindful about their reactions, and to try to be less reactive and more responsive when things are not going as hoped for.

Don't be afraid of getting help from mental health professionals. We're here to work with you and with your kids and we're not here to blame you or to condemn you.

It's fine [if] your kid goes off to school and they're successful. Everybody feels good. But what if there's a setback? What if things don't go as planned? How do you prepare yourself for that? By simply reminding yourself that there is no straight line through life. ... Time off may help. Sometimes it's better to just take a step back. Get your game back to where you want it to be. ... Don't be afraid of getting help from mental health professionals. We're here to work with you and with your kids and we're not here to blame you or to condemn you. So many parents face this fear of the shame or the embarrassment or the stigma, and what we think is the most deadly thing of all is not the mental illness, but the stigma around it that leads people to avoid getting the help in time.

Read an excerpt of The Stressed Years of Their Lives

Sam Briger and Thea Chaloner produced and edited the audio of this interview. Bridget Bentz, Molly Seavy-Nesper and Clare Lombardo adapted it for the Web.