Accessibility links
What We Can Learn About Consent (And Pleasure) From The World of Kink : Shots - Health News A lot of us stumble over conversations about sex. But people who are into kink make an art of talking about what they want or don't want. Here's their advice for making awkward talks sexy. 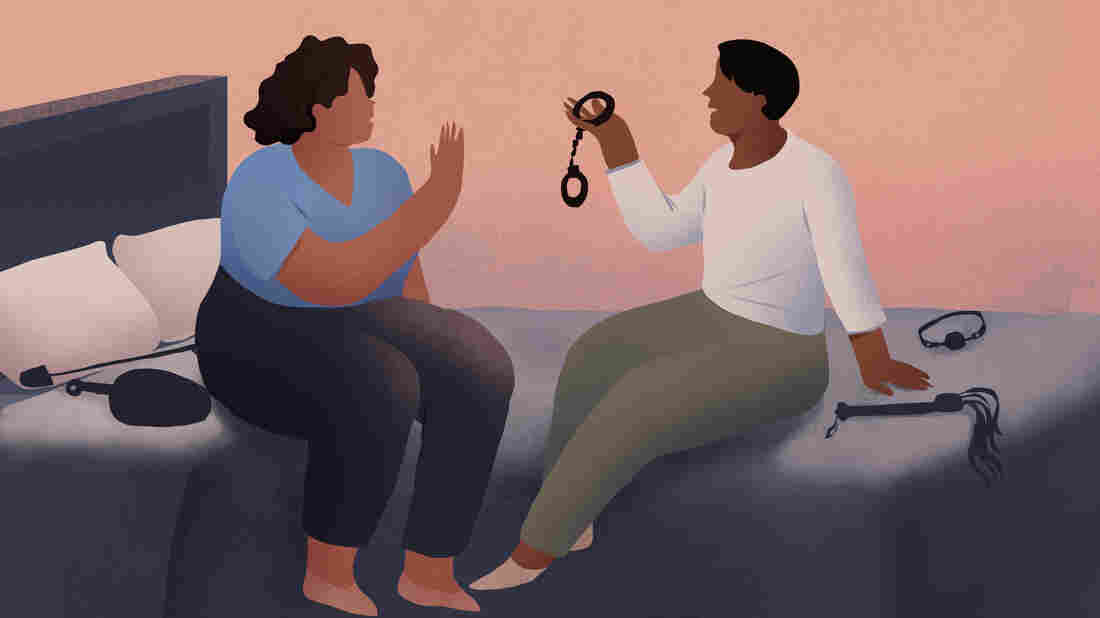 Talking about sex and consent can be awkward, but it's important — learning to do it better can help make sure that everyone is on the same page and also that you have the kind of sex that you want to have, whether that involves handcuffs or not. Nicole Xu for NPR hide caption 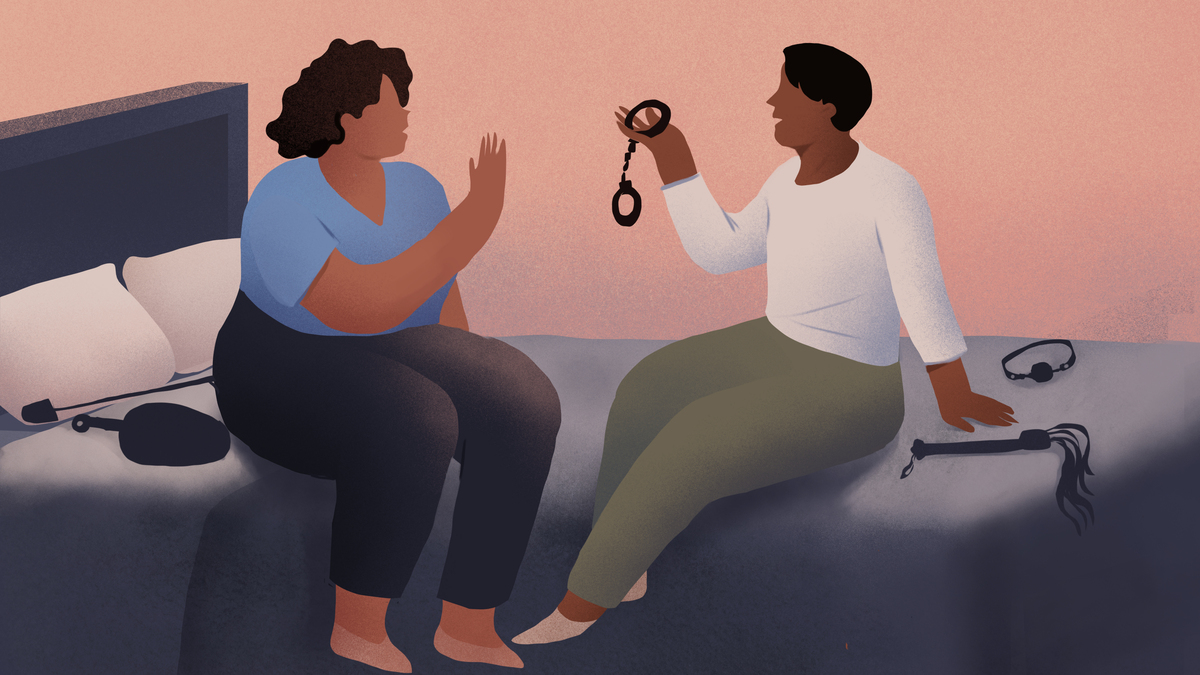 Talking about sex and consent can be awkward, but it's important — learning to do it better can help make sure that everyone is on the same page and also that you have the kind of sex that you want to have, whether that involves handcuffs or not.

I don't remember when the concept of consent as it relates to sex became part of my vocabulary, but it shapes how I approach my personal relationships and affects the way I move through the world. I was shaken when the #MeToo movement exploded, not only by the stories of sexual assault and harassment but also by the stories of women who had felt pressured or coerced into having sex they didn't want.

I flashed back to my own similarly uncomfortable experiences, when I was single and new to D.C. I remembered times on dates when I had expressed my discomfort by simply pulling away or turning my head when a guy tried to kiss or touch me when I didn't want to be kissed or touched. I was familiar with the sickening feeling of being distressed by something that was happening, while also feeling unable or hesitant to speak up for myself.

It has been on my mind a lot recently, how I, like so many people, have been socialized not to talk about sex because it's uncomfortable or awkward or it might kill the mood. I thought about how that hesitancy to speak can muddy the waters of consent, and I wanted to explore that idea with people who talk about sex a lot: the kink community, or kinksters, as they're known.

To make sure each partner is on the same page, kinksters have to talk about sex in a way that vanilla people — those who don't participate in kinky activities — often don't. Julie, a kinkster and sociologist in the Washington, D.C., area, believes that the communication kinksters have with one another distinguishes them from "vanillas."

"Ultimately, what it seems to come down to more than anything is not how many whips and chains are involved, but rather how openly are you willing to talk about the sex that you're having in the most blatant of terms," she says.

Of course, the kink community isn't perfect, as several kinksters told me. It has had some high-profile cases of bad behavior — nonconsensual or even abusive — and as a community, it is dealing with its own need to root out abuse. The kinksters I talked to stressed the importance of evolving the conversation to be even more thoughtful in navigating sex and consent.

Since this is a community that has made an art out of talking openly about sex, I sat down with a group of kinksters in Washington, D.C., to learn some better ways to think and talk about consent. We aren't using their full names to protect their current and future employment opportunities. Here's what I found out.

Consent isn't a simple yes-or-no question ... it's a dialogue

A core principle of kink is negotiating with a prospective partner before anything happens. If that negotiation is done right, it's more like a collaboration toward a common goal: each party's pleasure. That includes discussing what's about to happen before it happens, hashing out boundaries and ensuring that everyone involved is on the same page.

For Ren, the kind of consent she's getting is especially important. She organizes cigar socials — events where kinksters can explore the ritual of smoking cigars in a more sexual context. That could include one partner preparing the cigar for their dominant partner, presenting it and lighting it in a show of submission. Ren says she has started working only with what she calls "enthusiastic consent."

"It's opt-in consent, as opposed to what the vanilla world works with — which is opt-out consent. 'If you don't say no, it's fine' versus what I go for is, 'If you say yes, it's good.' " For Ren, that opt-in consent means only doing to a partner what has already been discussed.

But consent isn't just something given or received at the beginning — it needs to be ongoing. Julie says: "I'm most sexually compatible with the kinds of people who say, 'Of course I'll tell you if something's wrong.' I don't want to be in a situation where I don't trust you to tell me if there's a problem."

Ren adds that there have been multiple times when she has stopped having sex with a person when they've done something to her that she specifically told them not to do: "I've kindly given them their pants back, and I've been like, 'Well, it's time for you to go.' "

Consent is ongoing, and partners should be talking; if something goes wrong and someone wants to stop, everything should stop.

"It's OK to have a discussion the next day or the week after and say, 'I liked this but I didn't like that or can we try this next time?' etc," she says.

The kinksters I spoke with said there was not a perfect checklist or script for how to talk about sex. Remy, a lawyer in the N.Y. area, says that's because everybody is different.

"People have different minds, and that sounds very simple but what it can mean in practice is that somebody could do everything right and have taken every precaution and the other person with whom they are doing something can still experience that as a violation of consent," Remy says.

This is why it's so important to kinksters to talk frankly with one another about what they want and about how they want to feel. What does each person want to experience? What do you want to feel emotionally?

"There are so many things that when we get too hung up on specifics of activity, we lose track of some of the meaning — and a lot of times, the meaning is what affects people more," says Evan.

Heather says she prints out a short checklist on negotiation. "I always tell people: 'This is not a comprehensive list but is a great conversation starter for both sides," she says.

At the very top of the list is the question "Mood: How do we want to feel?"

Ren says that question requires a little bit of self-reflection. "I don't want to have bad sex anymore, so it's like how do I want to feel during sex? Well, I want to feel powerless, and then having conversations based on that in order to find compatible people to have that type of sex with."

"One of the most useful pieces of advice is not just negotiating what's going on but negotiating what things mean," says Evan. "You can say to someone, like, 'I want to be spanked. I want you to spank me,' but what does that look like? What does it mean, where does it involve touching?"

Yes, having frank and open discussions about sex can be awkward, but kinksters say they're able to have fun with it, too.

"I think there's a real failure in the imagination of a lot of the broad public to think that you can't ask for and even, you know, specifically in a detailed manner negotiate activities, without it also being sexy," Evan says.

The kinksters' "negotiation cheat sheet" encourages talking about things like each party's hard limits and triggers, level of experience, and who is doing what in the scenario (for example: who is being spanked and who is doing the spanking). It also suggests talking about each person's tolerance of the risk of minor harm, like rope or wax burns, or the potential emotional impacts from play.

And all of it can be sexy to talk about, says Ren.

"There are so many ways you can get consent without going 'I'd like to kiss you right now' or 'I'd like to touch your leg,' " Ren adds. "Like begging can be really hot. And if you make somebody beg for the thing they want, you would assume that they want that thing."

Talking about fantasies is another way to figure out what a partner might want to do in bed.

"A lot of time, when you start from fantasies, you can get a much better picture of how someone wants to feel," Julie says. "Then at some point, it becomes a question of 'You fantasize about this thing, are you actually OK with doing it in reality?' So then it's a matter of trying to make that feeling happen."

Get good at describing what gives you pleasure

Many of us have been socialized to find it shameful to ask for what we want sexually, and Julie thinks that needs to change to make communicating about sex easier.

"When we're too ashamed to do it when we're sober, and [think] that anyone who's had sex with too many people isn't worthy of marrying, you make it impossible for people to have a context for open and honest sexual communication," she says.

"I think the vanilla society are missing out on a lot of feelings and emotions and satisfaction that they could get if they would be more open and honest with each other and more willing to communicate about these things," Heather says.

And for Ren, that's one of the biggest changes she has found since joining the kink community.

Getting better negotiation skills led to better sex, Ren says. "A lot of my experiences with my partners are a lot better now because I'm a lot better at communicating the things I want out of our interactions, and I'm also able to give them more of the things they want."