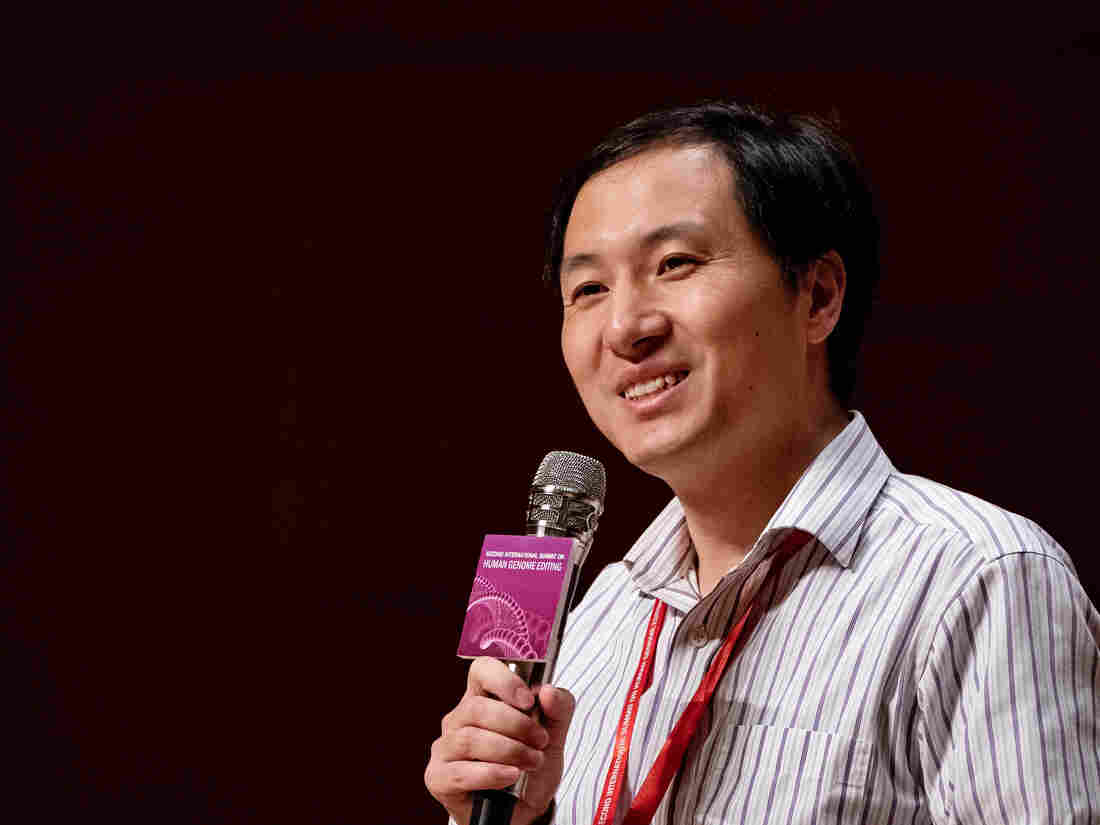 The genetic variation Chinese scientist He Jiankui was trying to re-create when he edited twin girls' DNA may be more harmful than helpful to health overall, a new study says. Anthony Kwan/Bloomberg/Getty Images hide caption 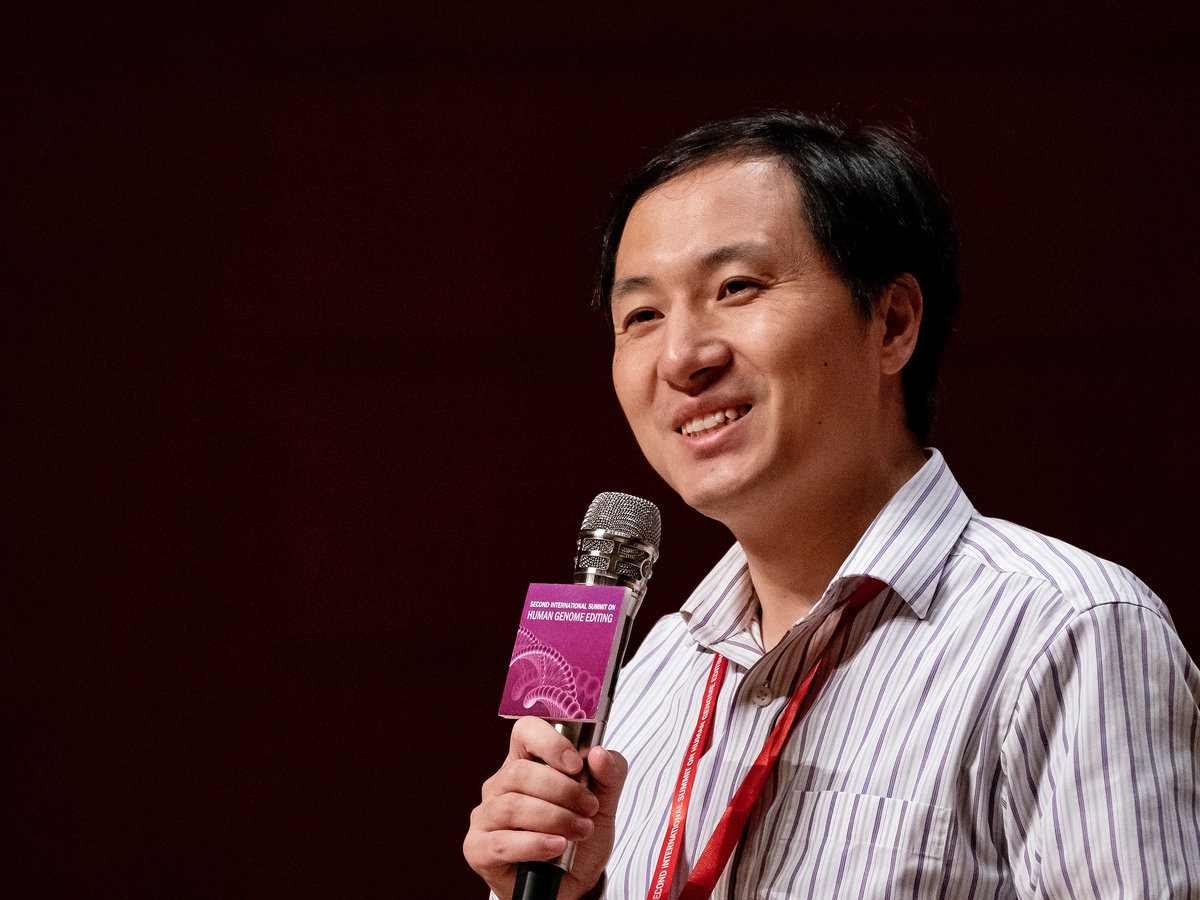 The genetic variation Chinese scientist He Jiankui was trying to re-create when he edited twin girls' DNA may be more harmful than helpful to health overall, a new study says.

There are new concerns about the world's first genetically modified babies.

It appears that the genetic variation a Chinese scientist was trying to re-create when he edited twin girls' DNA may be more harmful than helpful to health overall, according to a study published Monday. The study, in Nature Medicine, involves the DNA of more than 400,000 people.

"This is a cautionary tale," says Rasmus Nielsen, a professor of integrative biology at the University of California, Berkeley, who led the new study.

The Chinese scientist, He Jiankui, announced last fall that he had created twin girls from an embryo whose DNA he edited in his lab using the powerful gene-editing tool CRISPR.

He said he modified a gene known as CCR5 to protect the girls from the AIDS virus. But there's also evidence the CCR5 variation has other effects, such as making people more vulnerable to the West Nile and influenza viruses.

"We know it has many different effects. The question is: Is it overall beneficial or detrimental to have this mutation?" Nielsen says. "That was not known."

So Nielsen and his colleagues analyzed more than 400,000 people whose genes and health records are stored in the UK Biobank in Britain.

Overall, the researchers found that those who had two copies of the CCR5 variation were about 21% less likely to live until the age of 76, Nielsen and his colleagues report.

"What we found is that they had significantly increased mortality," Nielsen says. "It's rather substantial. We were quite surprised the effect was this large."

The reason isn't entirely clear, but Nielsen thinks it's probably because of an increased vulnerability to the flu.

The findings underscore why it was premature for the Chinese scientist to do what he did, Nielsen says.

"There are many reasons not to make CRISPR babies at this stage. And one of them is fact that we can't really predict the effect of the mutations that we induce," Nielsen says.

"This is a lesson in humility," says George Daley, the dean of the Harvard Medical School.

"Even when we think we know something about a gene, we can always be surprised and even startled, like in this case, to find out that a gene we thought was protective may actually be a problem," Daley says.

Daley notes that according to data the Chinese scientist presented last year, He apparently didn't even manage to edit the gene as intended. So it remains far from clear how the modification he did achieve will affect the girls.

"We don't even begin to understand what the impact of those deletions would be even on the original intent, which is to prevent HIV infection. So the experiment done in China was a failure — not just ethically, but scientifically," Daley says.

Some scientists argue that genetically modifying the human genome could eventually be useful.

"I think we should always be concerned about unanticipated consequences of any new technology, not just gene-editing and embryos," says George Church, a professor of genetics at Harvard who has been less critical of He.

"Every new technology has unintended consequences. The first monoclonal antibodies were nearly deadly. The first gene therapies were indeed deadly. All kinds of means of transportation were and still are deadly. It's all about benefits versus risks," Church says.

But many scientists, bioethicists and advocates worry other scientists will misuse the technology prematurely.

Soon after He's announcement, the Chinese scientist says he was contacted by at least one infertility clinic in Dubai congratulating him and asking if he would teach them how to do what he did, according to William Hurlbut, a scientist and bioethicist at Stanford who has been in touch with He.

"They asked him if he would offer a kind of lesson or tutorial so this technology could be used in their clinic," Hurlbut says. "You can see from this that there will be immediate uptake for application of this."

Any changes made in human embryos could be passed down for generations, which is why this sort of genetic manipulation has long been considered off-limits.

"I think we're facing a very serious issue as a species here," Hurlbut says. "This is not like other technologies. It's not like you're just dealing with an individual patient. You're now dealing with the entire human gene pool."

But Hurlbut, while stressing that he repeatedly tried to persuade He against doing what he did, says that He had good intentions.

"I think it's a little unfair that he's being labeled a rogue scientist," Hurlbut says. "That's not quite who he is."

Hurlbut says He was genuinely trying to help prevent the spread of HIV in China, where the disease remains very common in some places and highly stigmatized.