Accessibility links
NPR Rural Health Poll Finds Financial Insecurity Plagues Many Who Have A Disability : Shots - Health News Having to come up with $1,000 unexpectedly can be a challenge for anyone. NPR's recent poll on rural health found that especially true for one group: people with disabilities. 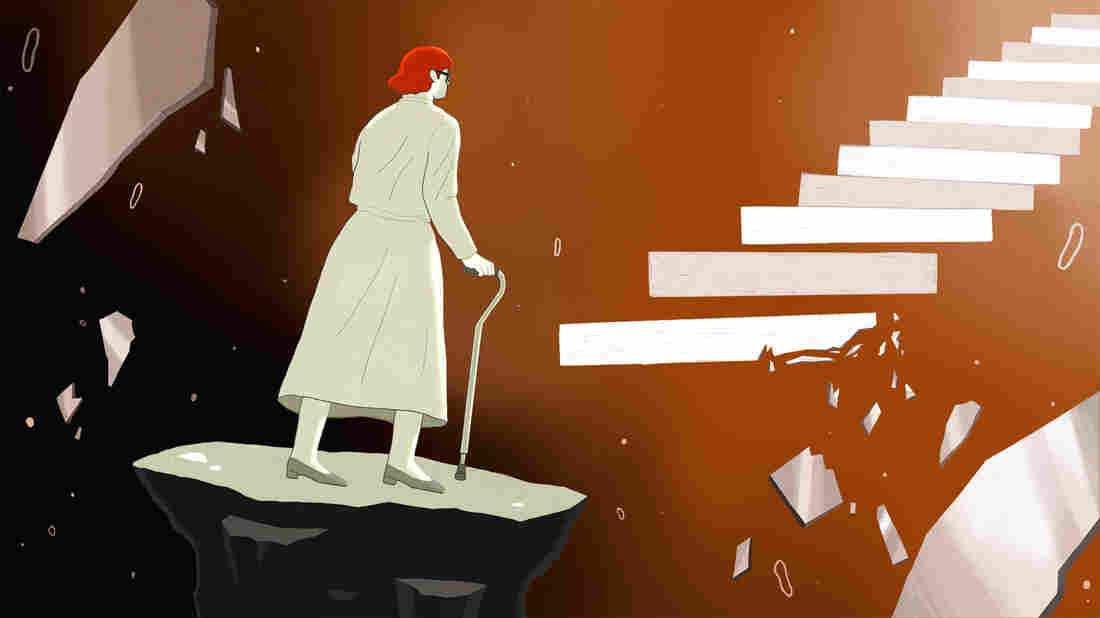 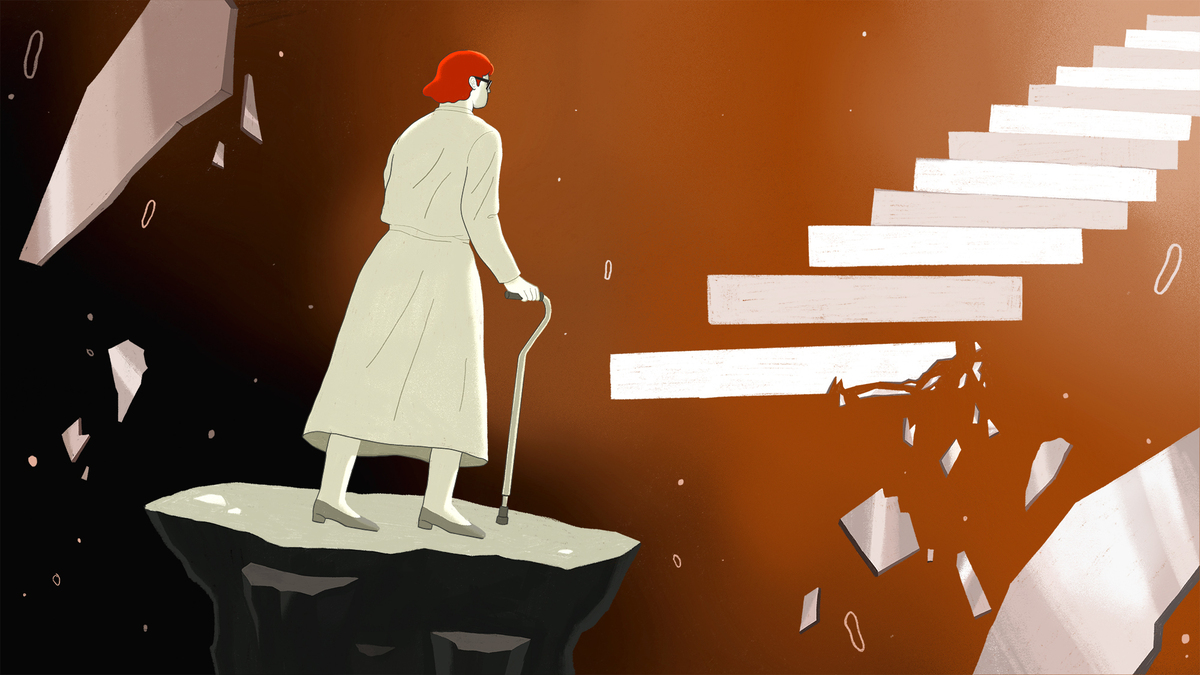 Carol Burgos is worried her neighbors think she is bringing the neighborhood down.

She lives in a mobile home park in a woodsy part of Columbia County, N.Y, just off a two-lane highway. The homes have neat yards and American flags. On a spring Saturday, some neighbors are out holding yard sales, with knickknacks spread out on folding tables. Others are out doing yardwork.

Burgos' lawn is unruly and overgrown.

"How bad do I feel when these little old ladies are mowing their lawn and I can't because I'm in so much pain?" she says.

Burgos is in her early 50s. She can't mow her lawn herself because of pain and physical limits related to her osteoarthritis, degenerative disk disease and other health issues. She was deemed disabled in 1997 and lives on payments from Social Security Disability Insurance. She gets health coverage through Medicare.

She also can't afford to pay someone to mow the lawn for her. "I don't want another bill," she explains. "I don't want to be in more debt. I'm embarrassed. I don't know, who do you ask?" 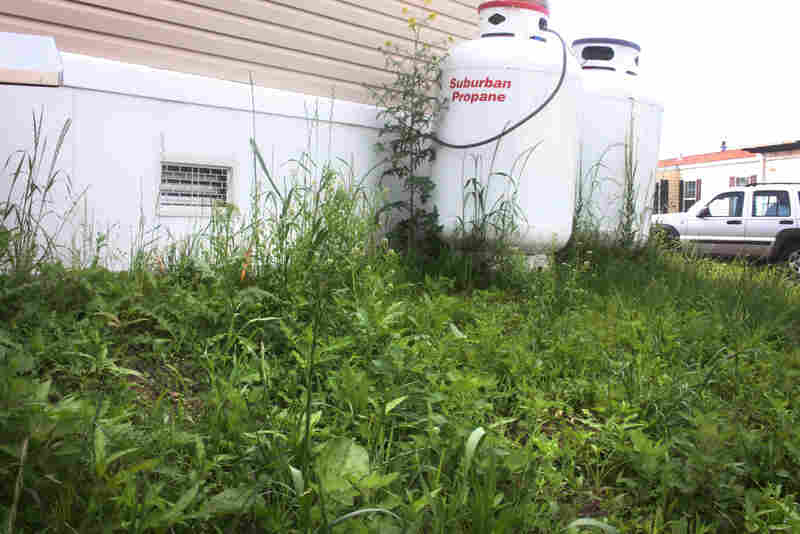 Carol Burgos is deeply frustrated she can't even physically mow her own lawn because of pain from her osteoarthritis, degenerative disk disease and other health issues. Selena Simmons-Duffin/NPR hide caption 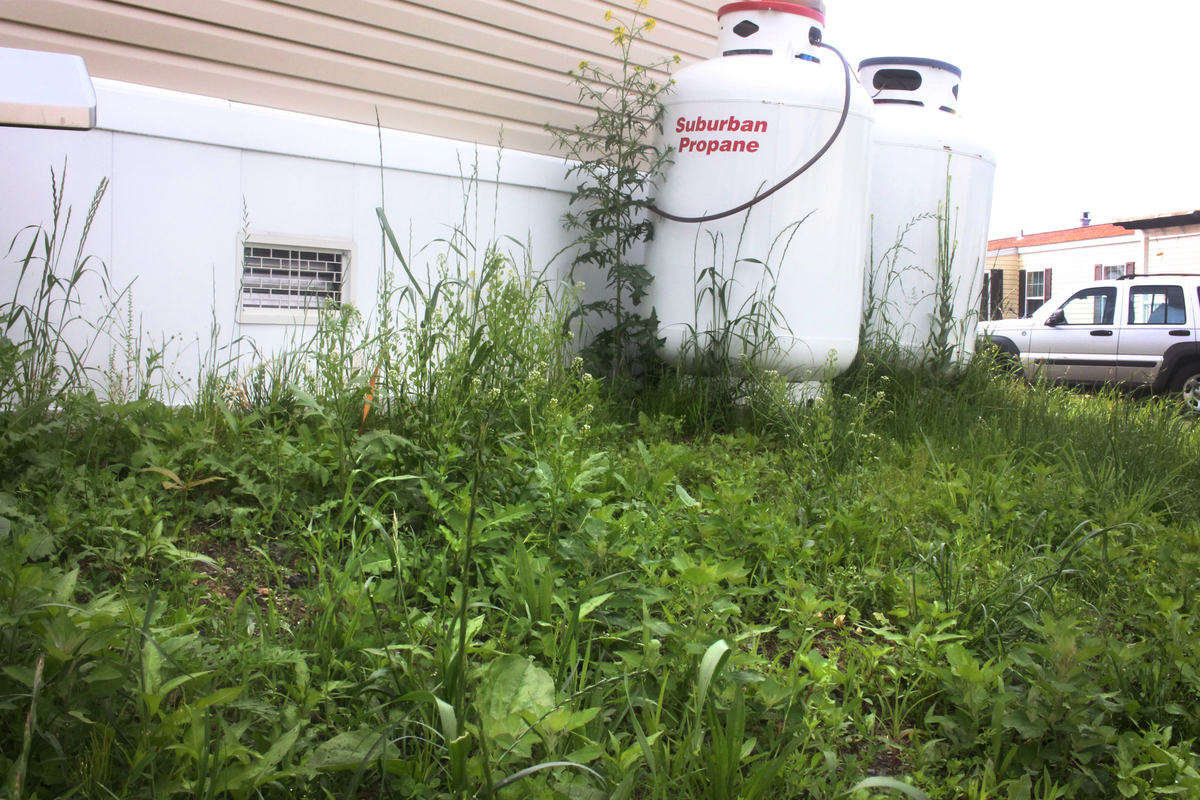 Carol Burgos is deeply frustrated she can't even physically mow her own lawn because of pain from her osteoarthritis, degenerative disk disease and other health issues.

For food, she gets a bit of money in food stamps every month. Her income works out to about $18,000 a year — not too far off from what most people living on disability benefits make.

There's no way she could pay a $1,000 expense right away, Burgos says. According to a recent poll NPR conducted with the Robert Wood Johnson Foundation and the Harvard T.H. Chan School of Public Health, 49% of rural Americans couldn't afford a sudden expense of that size.

The percentage was much higher — 70% — for people who, like Burgos, have disabilities. More than half of those with disabilities said their families have had problems paying for medical or dental bills in the past few years.

Burgos says she doesn't want to have to rely on disability benefits. She used to work — she's had lots of jobs, including helping developmentally challenged people with life skills.

She identifies as a "working person with disabilities" even though she hasn't worked for 10 years. She is frustrated by the copays she has to pay for doctor visits and at the pharmacy — she ends up filling only her most important prescriptions, she says.

"I want to work," she says. "Screw the money! Give me medical coverage — full medical — so I can be an able body that is willing to work."

Burgos feels stuck in poverty and physically stuck, because it's so hard for her to get around.

Having good access to transportation — or not — has a huge impact on the health of people living in rural parts of the country, says Dr. Kirsten Bibbins-Domingo, a professor of epidemiology and biostatistics at the University of California, San Francisco who studies the health of vulnerable populations.

"If you go to less populated areas — rural areas — access to a car that functions well [and] the costs for gas becomes such an essential element," Bibbins-Domingo says. "Both to drive to seek medical care, as well as to drive to access the other resources that are necessary to pursue good health."

Without that transportation — or ready access to other basics like healthy food or good housing — people can get into a vicious cycle, she says.

That cycle of poor health and poverty hits people with disabilities particularly hard. "Their poverty levels are over two times higher, compared to those without disabilities," says Bill Erickson of the Yang-Tan Institute on Employment and Disability at Cornell University.

The federal government does provide help to people with disabilities under two different programs. Some people, like Burgos, have a work history that entitles them to payments from Social Security Disability Insurance. Others, who never worked — perhaps because of a developmental disability — are eligible for Supplemental Security Income.

But other hurdles can arise. If you're disabled, live in a rural area and want to work, you still have to find a job you can do.

"Since the Great Recession, rural counties really haven't seen as much employment growth as urban counties," Erickson says. "Also just the types of jobs that are available to those sorts of communities may be tending toward, you know, requiring people to be able to move things physically or whatever.

"And the limitations that the individual with disabilities may have," Erickson continues, "may be preventing them from being able to do those particular types of jobs — or employers can't provide the accommodations that may be necessary."

Erickson's colleague at ILR, Thomas Golden, adds that the complexity of disability benefits presents another problem for people who would like to work. It's not clear to many people how much they are allowed to work without jeopardizing their benefits, he says, or what programs are available to help them in the job search.

For the past six years, Golden and Erickson have worked with young people receiving Supplemental Security Income as part of the New York State PROMISE initiative.

"In a lot of cases, those youth and their families weren't ready to talk about work because they couldn't pay their rent," Golden says. "Or they were getting evicted. Or other basic needs needed to be met first before they could think about their own self-development, when it came to work and economic independence."

Burgos says she would like to find a job she is able to do, with enough hours to supplement her income but not trigger a loss of her Social Security benefits. First, though, she says, she must figure out how to deal with the overgrown lawn and a student loan bill that just arrived in the mail. And she is trying to coordinate nursing care for her elderly mother.

There are good things in her life, too, Burgos says. She has her faith — she's a born-again Christian. Her car is a bit beat up, but it works. And she has a very sweet little dog.

And even though she has to rely on a walker for long distances — and fears she eventually will end up in a wheelchair — for now, she is still well enough to get up and down the stairs to her front door.