Accessibility links
Bill Of The Month: $94,031 For Monitoring During Spinal Surgery : Shots - Health News A service called neuromonitoring can cut the risk of nerve damage during delicate surgery. But some patients are receiving large bills they didn't expect. 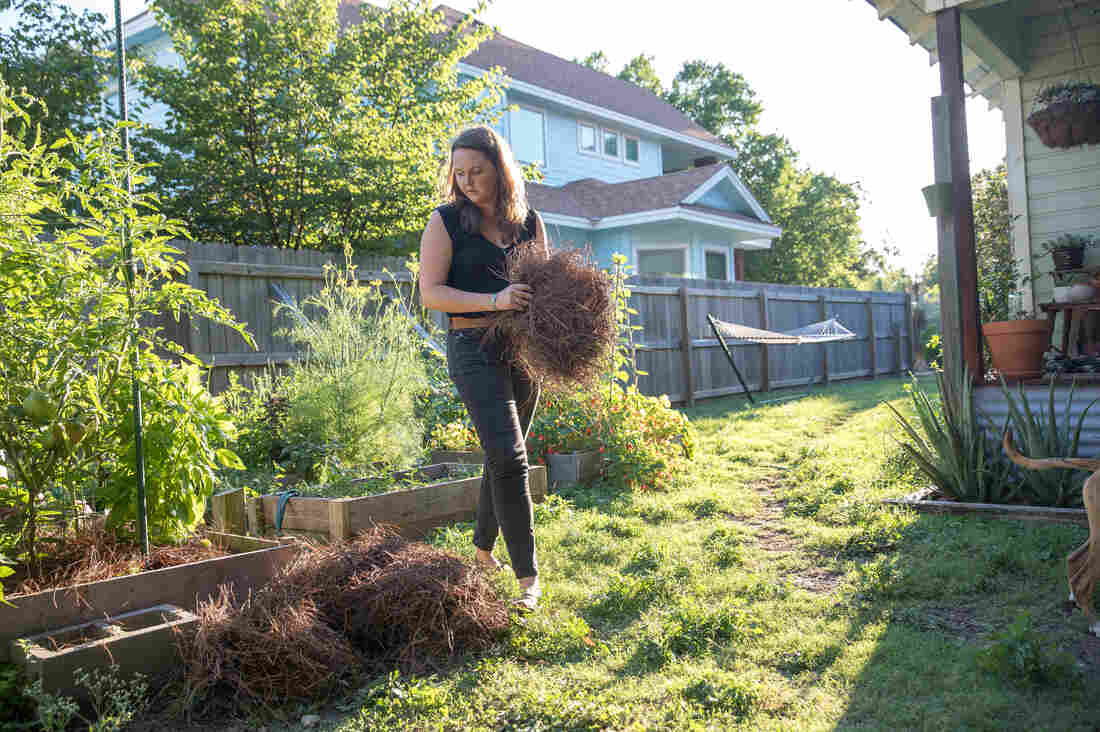 Since her spinal surgery, Liv Cannon has been able to work in the garden and play with her energetic dogs without having to worry about pain. Julia Robinson for Kaiser Health News hide caption 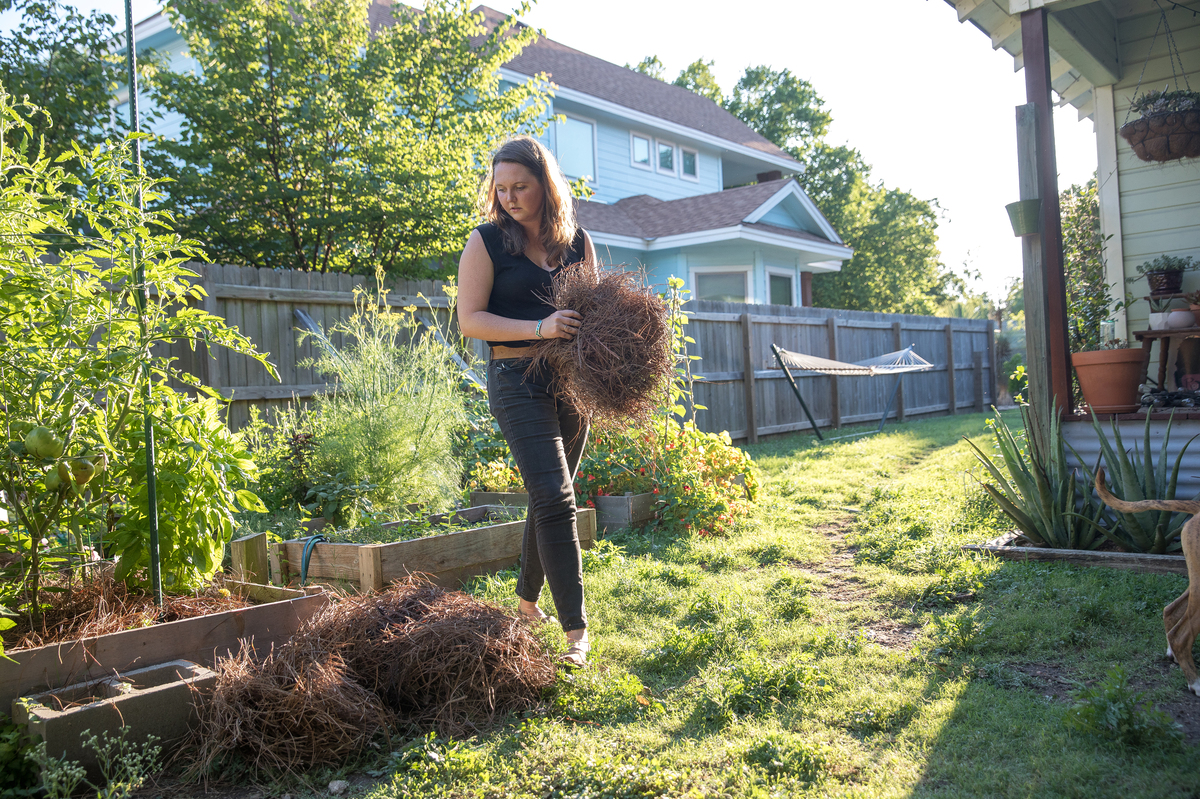 Since her spinal surgery, Liv Cannon has been able to work in the garden and play with her energetic dogs without having to worry about pain.

Spinal surgery made it possible for Liv Cannon to plant her first vegetable garden.

"It's a lot of bending over and lifting the wheelbarrow and putting stakes in the ground," the 26-year-old says as she surveys the tomatillos, cherry tomatoes and eggplants growing in raised beds behind her house in Austin, Texas. "And none of that I could ever do before."

For the first 24 years of her life, Cannon's activities were limited by chronic pain and muscle weakness.

Cannon saw lots of doctors over the years. But they couldn't explain what was going on. She'd pretty much given up on finding an answer for her pain until her fiancé, Cole Chiumento, pushed her to try one more time. 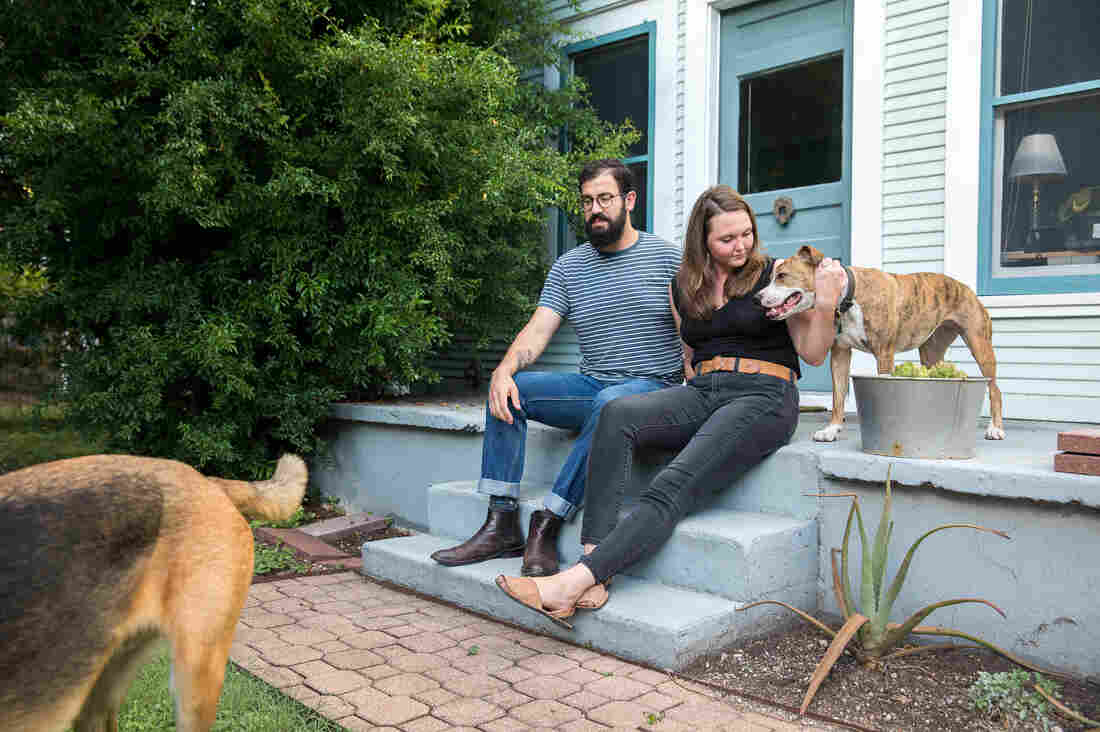 Liv Cannon and her fiancé, Cole Chiumento, considered calling off their wedding because of uncertainty over medical debt from her surgery. "I think about it every time I go to the mailbox," Cannon says. Julia Robinson for Kaiser Health News hide caption 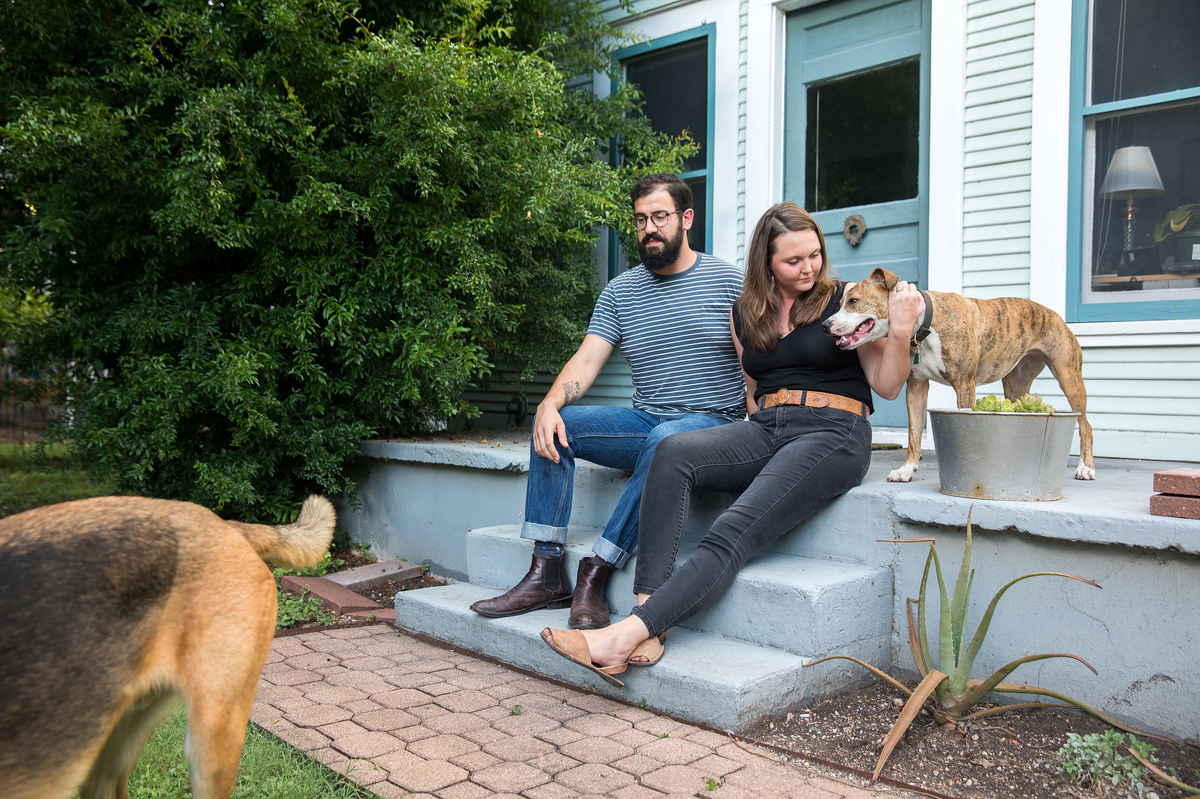 Liv Cannon and her fiancé, Cole Chiumento, considered calling off their wedding because of uncertainty over medical debt from her surgery. "I think about it every time I go to the mailbox," Cannon says.

"It never improved. It never got better," Chiumento says. "That just didn't sound right to me."

So Cannon went to a specialist who ordered a scan of her spine. A few days later, her phone rang.

"We found something on your MRI," a voice said.

The images showed that Cannon had been born with diastematomyelia, a rare disorder related to spina bifida. It causes the spinal cord to split in two.

In Cannon's case, the disorder also led to a tumor that trapped her spinal cord, causing it to stretch as she grew.

In December 2017, a neurosurgeon opened up her spinal column and operated for several hours, freeing the cord.

"I think it was Day 3 after my surgery I could feel the difference," Cannon says. "There was just a pain that wasn't there anymore."

As she recovered, Cannon saw lots of huge medical bills go by. They were all covered by her insurance plan. Almost a year went by after the operation.

Then a new bill came.

Patient: Liv Cannon, 26, of Austin, Texas. At the time of her surgery, she was a graduate student insured with Blue Cross and Blue Shield of Texas through her job at the University of Texas.

Total bill: $94,031 for neuromonitoring services. The bill was submitted to Blue Cross and Blue Shield of Texas, which covered $815.69 of the amount and informed her she was responsible for the balance. The insurer covered all of Cannon's other medical bills, which came to more than $100,000, including those from the hospital, surgeon and anesthesiologist.

Medical service: Cannon was born with a rare spinal condition that had caused chronic pain and muscle weakness since she was a child. In December 2017, she had successful spinal surgery to correct the problem. Her surgeon requested neuromonitoring during the operation.

What gives: Neuromonitoring made sense for the type of surgery Cannon had. The bill did not. Cannon should have been warned long before her surgery that the neuromonitoring company would be an out-of-network provider whose fees might not be covered by her insurer. 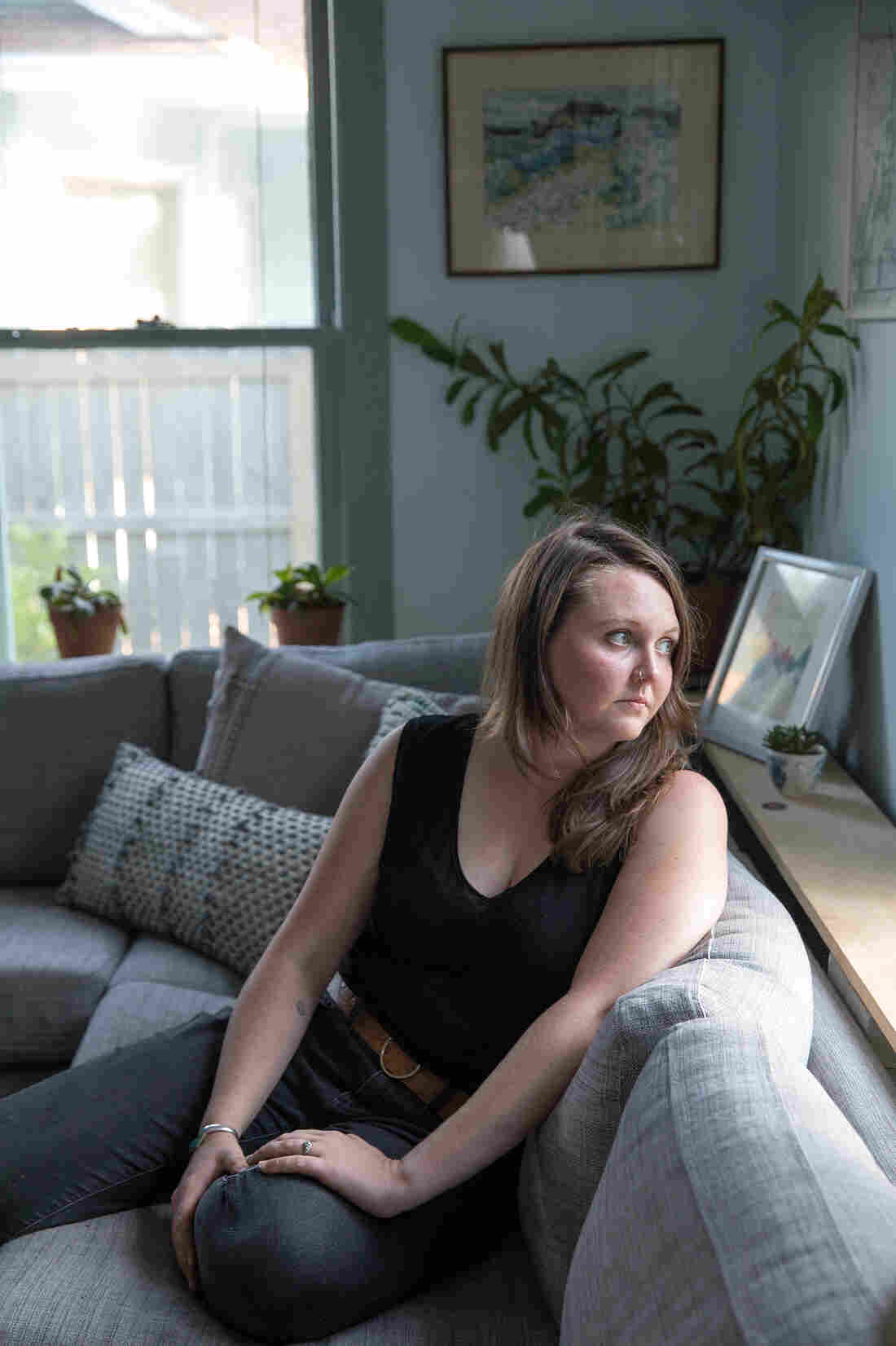 Liv Cannon was diagnosed with diastematomyelia, a rare disorder related to spina bifida, and had surgery in December 2017 to correct the problem. Most of the cost of the surgery was covered by her insurance, but more than $93,000 for out-of-network neuromonitoring services was not. Julia Robinson for Kaiser Health News hide caption

At first, she was baffled by the billing information that Blue Cross sent her. "It was one of those things from the insurance company that says this is the amount we cover and this is the amount you might owe your provider," she says.

The statement listed four separate charges from the day of her surgery. Each was described as a "diagnostic medical exam." Together, they came to $94,031.

"I was shocked," she says. Chiumento was outraged.

The bill had come from an Austin company called Traxx Medical Holdings LLC. Traxx did not respond to emails, phone calls and a fax seeking comment on the charge.

The company's website shows that Traxx provides a service called intraoperative neurophysiological monitoring, which evaluates the function of nerves during surgery. The goal is to help a surgeon avoid causing permanent damage to the nervous system.

There is an ongoing debate about whether neuromonitoring is needed for all spinal surgery. But it is standard for a complicated operation like the one Cannon had, says Richard Vogel, president of the American Society of Neurophysiological Monitoring.

"You're not going to meet anybody who believes that a hundred thousand dollars or more is reasonable for neuromonitoring," Vogel says.

Most neuromonitoring companies charge reasonable fees for a valuable service and are upfront about their ownership and financial arrangements, he says. But some companies are greedy and submit huge bills to an insurance company, hoping they won't be challenged, he adds.

Even worse, "some neuromonitoring groups charge excessive fees in order to gain business by paying the money back to surgeons," Vogel says.

It is unclear whether Traxx, the company that provided neuromonitoring for Cannon, has any financial arrangements with surgeons. Cannon's surgeon did not respond to requests for comment.

The size of the fee for Cannon's neuromonitoring was only part of the problem. The other part was that Traxx — unlike her hospital, surgeon and anesthesiologist — had no contract with Blue Cross and Blue Shield of Texas.

As an out-of-network provider, the company could set its own fees and try to collect from Cannon any amount it didn't get from her insurer.

Blue Cross and Blue Shield of Texas said it doesn't comment on problems affecting individual members. But the insurer did offer a general statement by email about the problem:

"Unfortunately, non-contracted providers can expose our members to significantly greater out-of-pocket costs. These charges often have no connection to underlying market prices, costs or quality. If given the opportunity, we will try to negotiate with the provider to reduce the cost."

One thing working against Cannon is that she is pretty sure that just before surgery, she signed a paper that authorized the out-of-network neuromonitoring.

Getting consent in the hospital may be legal, but it's not reasonable, says Dr. Arthur Garson Jr., who directs the Health Policy Institute at the Texas Medical Center in Houston.

For example, a patient might be having a heart attack, Garson says. "You got chest pain, you're sweating, sick as you can be, and they hand you a piece of paper and they say, 'Sign here.' "

The Texas Legislature passed a bill in May to protect patients from the sky-high bills this practice can produce. And Congress is considering similar legislation.

These are small steps in the right direction, Garson says.

"Asking the individual patient to make that decision even when they're not sick, I think, is difficult," he says, "and maybe we ought to think of some better way to do it."

The Texas legislation is expected to take effect later this year but affects only bills that occur after it becomes law. So that $94,000 figure is never far from Cannon's mind, even as she and Chiumento plan their wedding.

"Every time I go out and I collect the mail, I'm wondering, 'Is this the day it's going to show up and we're going to have to deal with this?' " she says.

The takeaway: Neuromonitoring during complex surgery involving the spine can help prevent inadvertent damage. But monitoring may be unnecessary for lower-risk back operations, like spinal fusion.

It is strange that neuromonitoring is charged as a separate service, rather than part of the spine surgery. Cardiac monitoring is not charged separately during bypass surgery, for example.

When considering spine surgery, ask your doctor whether neuromonitoring will be part of the procedure. If so, will it be billed separately? Try to find out the name of the provider and get an estimate of the cost beforehand.

Check with your insurer to determine if the neuromonitoring provider is within your network and to make sure the estimated charge will be covered.