Accessibility links
Trump Executive Order To Push For Health Care Price Transparency : Shots - Health News President Trump is issuing an executive order intended to force hospitals to disclose prices. A lot of work remains to turn this order into a regulation, and the industry is resisting the move. 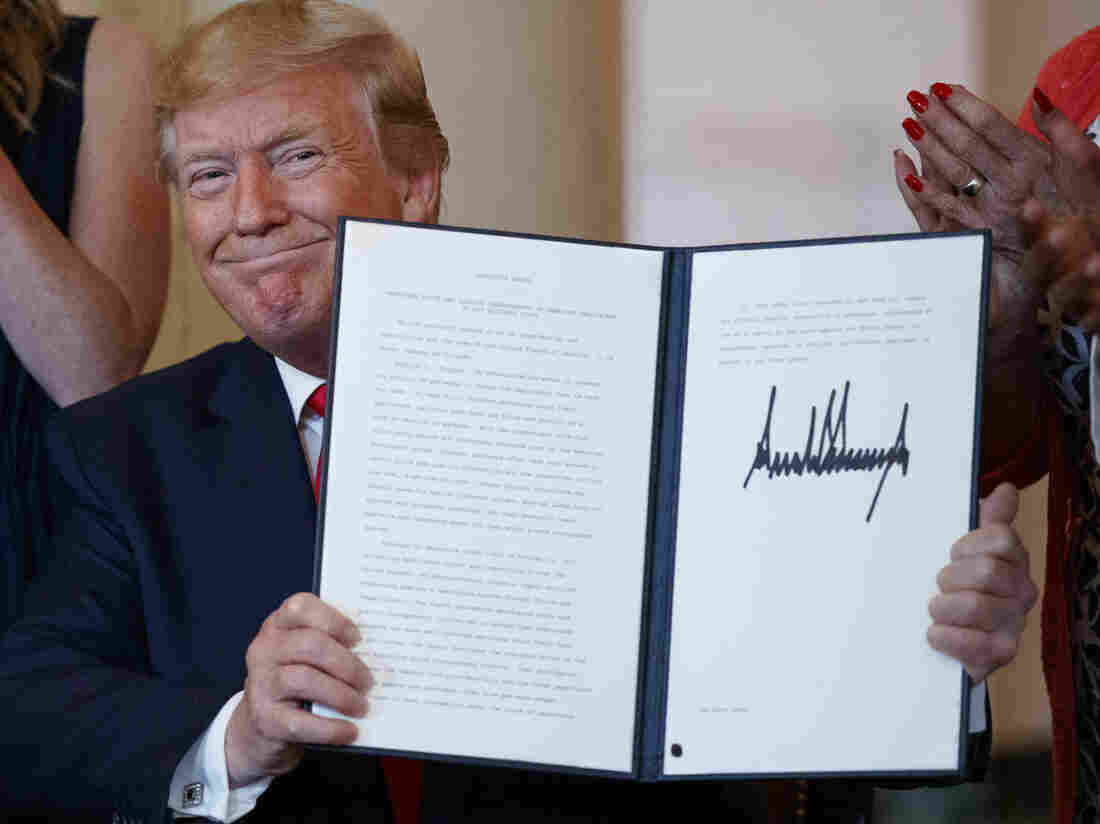 The executive order on drug price transparency that President Trump signed Monday doesn't spell out specific actions; rather, it directs the department of Health and Human Services to develop a policy and then undertake a lengthy rule-making process. Carolyn Kaster/AP hide caption 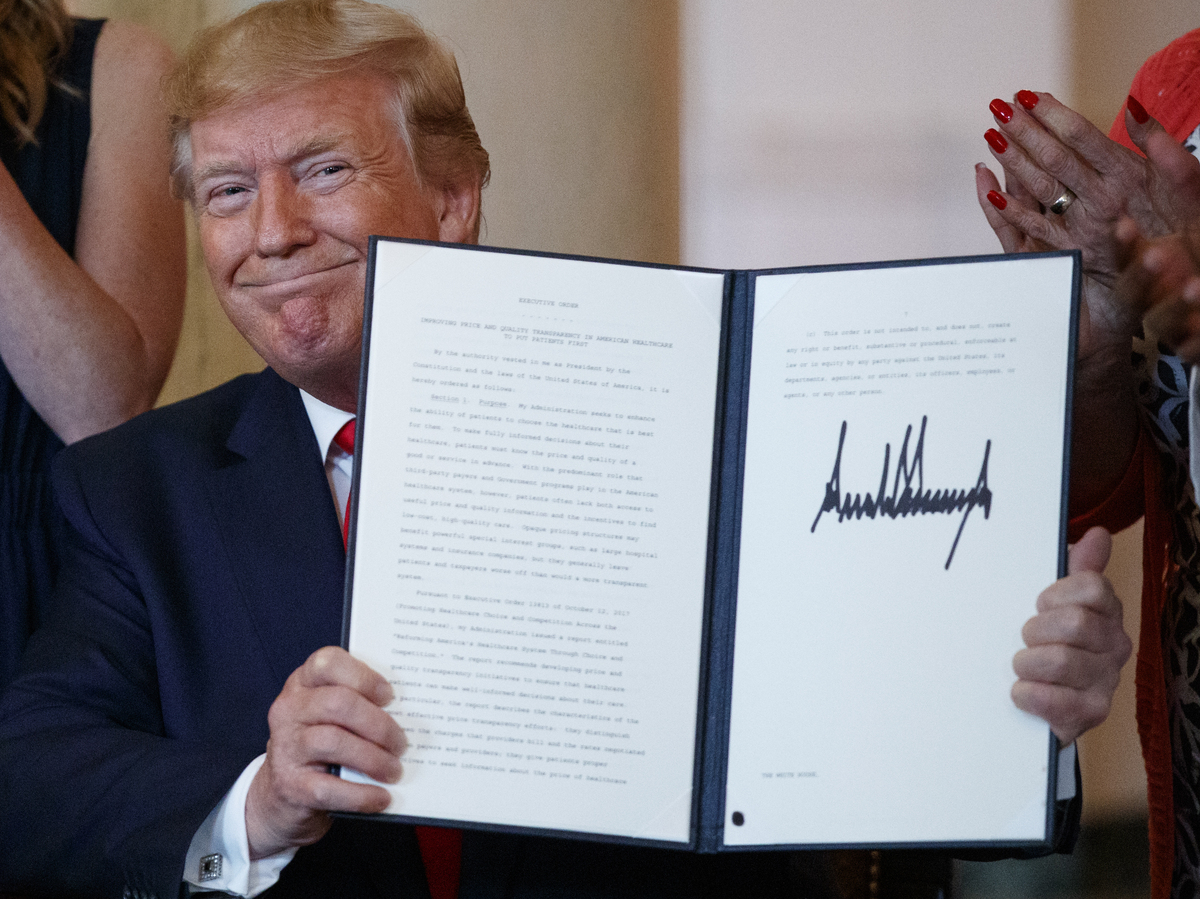 The executive order on drug price transparency that President Trump signed Monday doesn't spell out specific actions; rather, it directs the department of Health and Human Services to develop a policy and then undertake a lengthy rule-making process.

President Trump signed an executive order Monday on price transparency in health care that aims to lower rising health care costs by showing prices to patients. The idea is that if people can shop around, market forces may drive down costs.

"Hospitals will be required to publish prices that reflect what people pay for services," said President Trump at a White House event. "You will get great pricing. Prices will come down by numbers that you wouldn't believe. The cost of healthcare will go way, way down."

Like several of President Trump's other health policy-related announcements, today's executive order doesn't spell out specific actions, but directs the department of Health and Human Services to develop a policy and then undertake a lengthy rule-making process.

"The president knows the best way to lower costs in health care is to put patients in control by increasing choice and competition," HHS Secretary Alex Azar said at a phone briefing for reporters Monday morning.

Azar outlined five parts of the executive order, two of which are directly related to price transparency.

It directs the agency to draft a new rule that would require hospitals to disclose the prices that patients and insurers actually pay in "an easy-to-read, patient-friendly format," Azar said.

The new rule should also "require health care providers and insurers to provide patients with information about the out-of-pocket costs they'll face before they receive health care services," he added.

The idea is simple. Health care is an industry where consumers don't have access to the kind of information they have when making other purchasing decisions. The executive order could — if it leads to finalized, HHS rules — pressure the industry to function more like a normal market, where quality and price drive consumer behavior. Some consumer advocates welcomed the move.

"Today patients don't have access to prices or choices or even ability to see quality," said Cynthia Fisher, founder of a group called Patient Rights Advocate. "I think the exciting part of this executive order is the President and administration are really moving to put the patient in the driver's seat and be empowered for the first time with knowledge and information."

Exactly how the rules the executive order calls for would work is still to be determined, administration officials said.

Push back from various corners of the healthcare industry came quickly, with hospital and health plan lobbying organizations arguing this transparency requirement would have the unintended consequence of pushing prices up, rather than down.

"Publicly disclosing competitively negotiated, proprietary rates will reduce competition and push prices higher — not lower — for consumers, patients, and taxpayers," said Matt Eyles, CEO of America's Health Insurance Plans in a statement. He says it will perpetuate "the old days of the American health care system paying for volume over value. We know that is a formula for higher costs and worse care for everyone."

Some health economists and industry observers without a vested interest expressed a similar view. Larry Levitt, senior vice president for health reform the Kaiser Family Foundation, tweeted that although the idea of greater price transparency makes sense from the perspective of consumer protection, it doesn't guarantee lower prices.

"I'm skeptical that disclosure of health care prices will drive prices down, and could even increase prices once hospitals and doctors know what their competitors down the street are getting paid," Levitt wrote.

This executive order is the latest in a series of moves from the Trump administration on health care price transparency recently. As NPR reported, just last month the White House announced its legislative priorities for ending surprise medical bills, which included patients receiving a "clear and honest bill upfront" before scheduled care. That same week, HHS announced a final rule requiring drugmakers to display list prices of their drugs in TV ads.

However, several of President Trump's past health care announcements have gotten tied up before the promises to lower costs could be realized.

For instance, in May 2018, Trump rolled out a Blueprint To Lower Drug Prices which included a variety of proposals intended to reduce pharmaceutical costs to individuals, the industry and the economy as a whole, as NPR reported.

In October of last year, the Centers for Medicare and Medicaid Services proposed an international pricing model for setting what Medicare Part B would pay for certain drugs. This is the closest the Trump administration has come to Trump's campaign promise to have Medicare negotiate with drug companies.

The proposal was put out for public comment with a December 2018 deadline. Thousands of comments came in, including a lot of pushback from the pharmaceutical industry and the proposed rule has not yet been finalized and it's not clear it ever will be.