Accessibility links
'5B' Documentary Spotlights The Nation's First AIDS Hospital Unit : Shots - Health News A new documentary tells the story of America's first inpatient unit dedicated to the care of people with AIDS. Nurse Cliff Morrison helped create 5B in 1983, and worked on it with Dr. Paul Volberding. 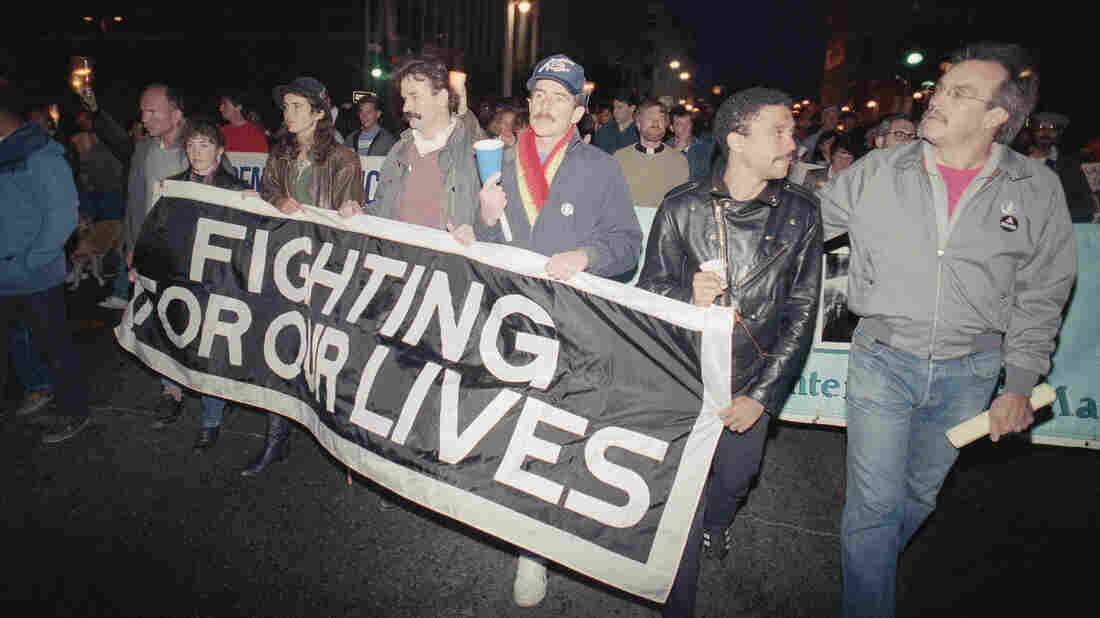 Marchers at a candlelight vigil in San Francisco, Calif., carry a banner to call attention to the continuing battle against AIDS on May 29, 1989. The city was home to the nation's first AIDS special care unit. The unit, which opened in 1983, is the subject the documentary 5B. Jason M. Grow/AP hide caption 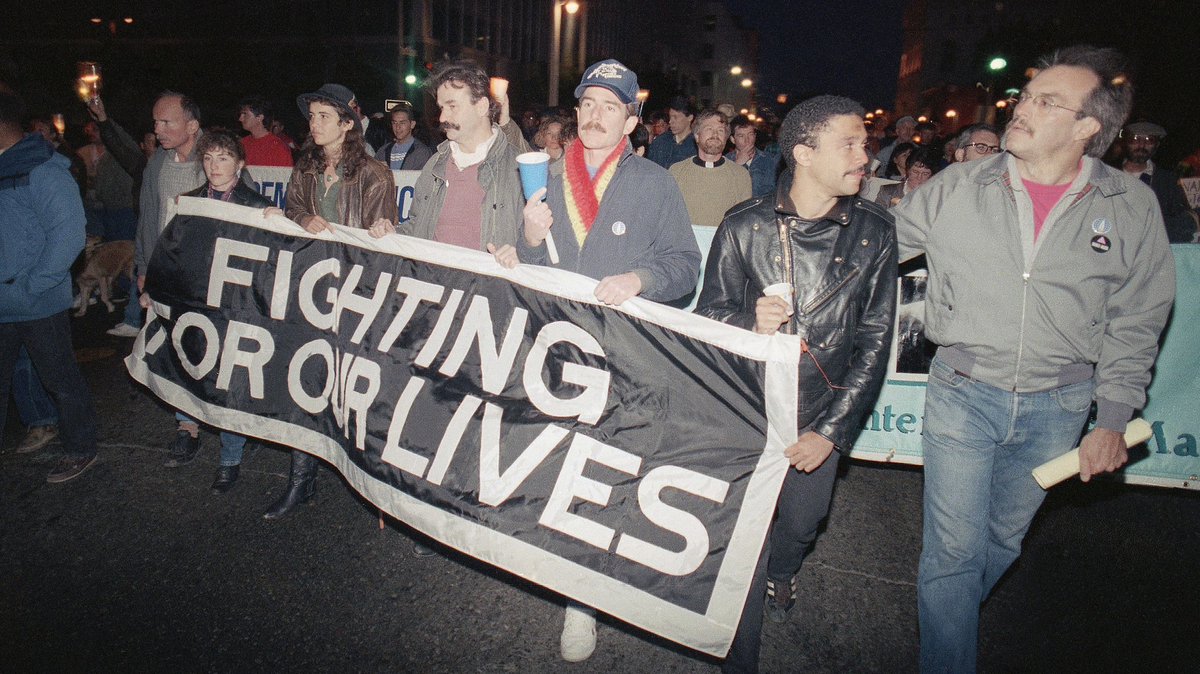 Marchers at a candlelight vigil in San Francisco, Calif., carry a banner to call attention to the continuing battle against AIDS on May 29, 1989. The city was home to the nation's first AIDS special care unit. The unit, which opened in 1983, is the subject the documentary 5B.

Today, antiretroviral medicines allow people with HIV, the virus that causes AIDS, to live long, productive lives. But at the onset of the AIDS epidemic in the early 1980s, the disease was considered a death sentence. No one was sure what caused it or how it was spread. Some doctors and nurses refused to treat patients with the disease; others protected themselves by wearing full body suits.

Cliff Morrison, a nurse at San Francisco General Hospital at the time, remembers being appalled by what he was seeing: "I would go in patients' rooms and you could tell that they hadn't had a bath," he says. "They weren't being taken care of."

In 1983, Morrison organized a team of healthcare providers to open Ward 5B, an in-patient AIDS special care unit at San Francisco General Hospital. The medical team on the unit encouraged patients to make their rooms like home, and allowed families and partners to visit whenever they could. They comforted patients by touching them, and would even sneak in pets.

5B was the first unit of its kind in the nation — and it became a model for AIDS treatment, both in the U. S. and overseas. Now, a new documentary, called 5B, tells the story of the doctors and nurses who cared for patients on the ward.

Dr. Paul Volberding was a doctor on Ward 5B and went on to co-create an AIDS clinic at the hospital, which was one of the first in the country. He emphasizes how critically ill the patients on the unit were.

"These were people that were really, sometimes literally, dying when they came into the hospital, so whatever we could do to make them more comfortable was really important," he says.

The work on 5B was emotionally draining, and death was a constant reality. Still, Volberding describes his time there as a "blessing."

It really put in perspective the fact that life is on a continuum, and death is just part of that continuum. I saw people have beautiful deaths, and that was wonderful."

"The care that patients were getting was really special and very different than the rest of the hospital," he says. "It was always a complete privilege to do this work."

Morrison adds, "I had some really wonderful experiences with people in their passing, and they taught me a great deal. It really put in perspective the fact that life is on a continuum, and death is just part of that continuum. I saw people have beautiful deaths, and that was wonderful."

Volberding: I don't think most people can understand today how devastating a disease AIDS was back in those days. ... It's just impossible to appreciate that HIV, if it's untreated, kills essentially 100 percent of the people. It's much worse than Ebola, much worse than smallpox. So, everyone died. Every patient that was sick enough to come to us to look for medical care would die from this disease. And people knew that there was a lot of education to be done, but they knew that this was a really bad situation.

On how they didn't know if what they were seeing was infectious when the first patients came in with the rare cancer, Kaposi's sarcoma, which ended up being one of the symptoms of the as-yet-unknown AIDS virus 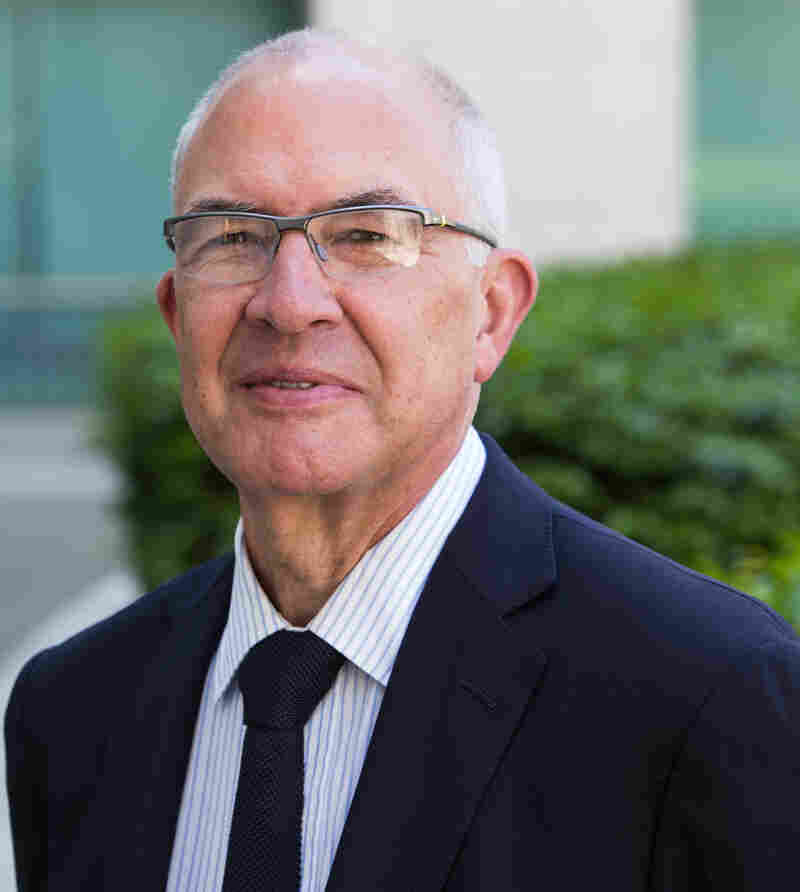 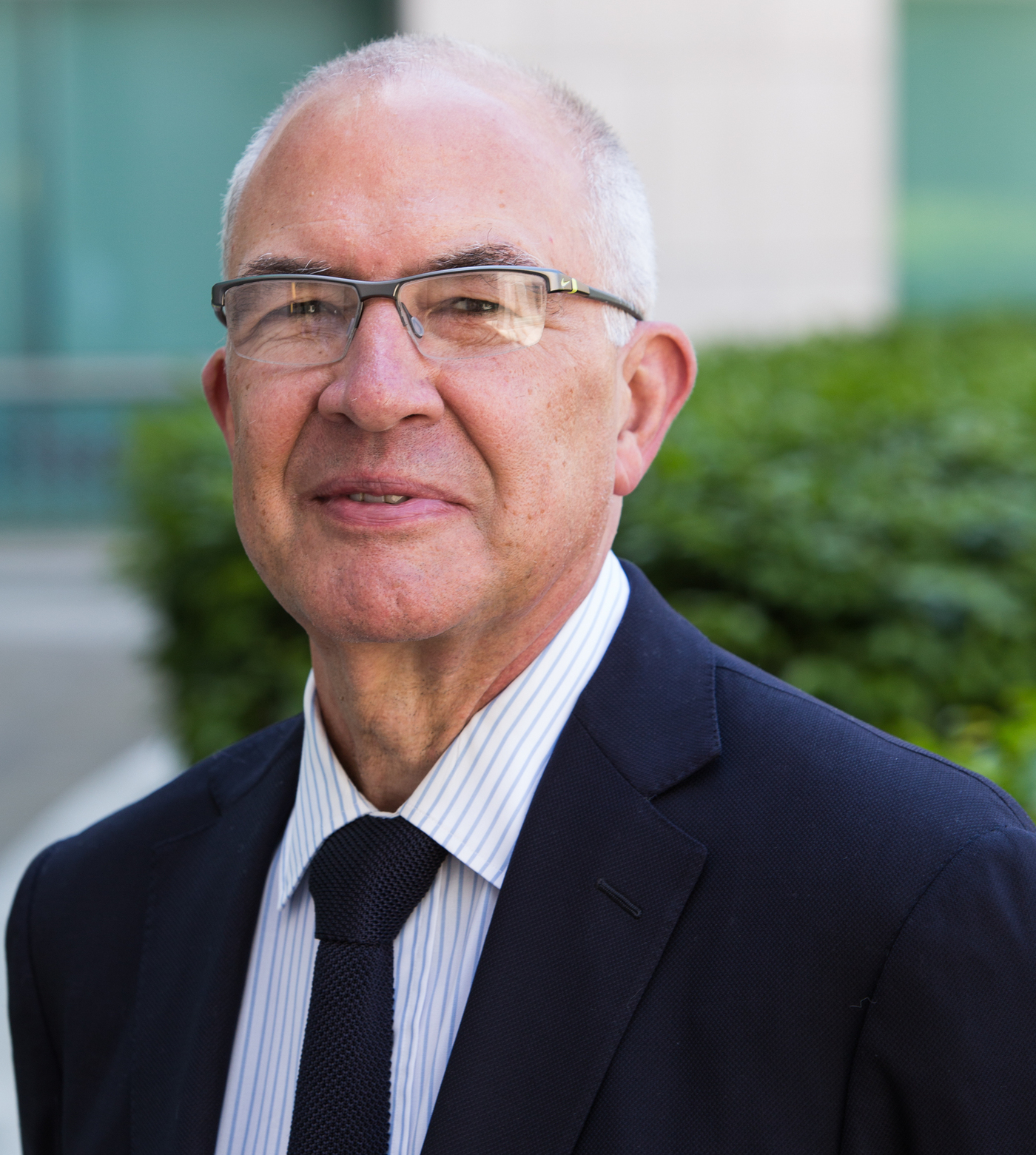 "It was always a complete privilege to do this work," Dr. Paul Volberding says of treating patients on 5B.

Volberding: I wasn't worried about catching anything from the patients because that's not what I expected in taking care of cancer patients. I didn't expect to be worried about anything, and wasn't really. But the care that the patients were getting was pretty spotty in the hospital. I think that was one of the things that led Cliff and the others to really put together the nursing unit.

How To Demand A Medical Breakthrough: Lessons From The AIDS Fight

Morrison: In my experience, in already what had been seen and what I was hearing from the specialists around us with the information that was coming out, was that I wasn't at risk providing care to people by touching people. And everybody around us was saying, "Oh you're just being cavalier. This is really not what you should be doing, and you're giving the wrong message." And our response always was, "We're giving the right message." So we were dealing with a lot of hysteria and misinformation and just outright discrimination, I think, very early on.

On expanding the hospital's family and visitors' policy for Ward 5B

Morrison: We also noticed right away ... that we needed to really look at issues around family and visitation, because healthcare was very rigid and was really stuck on this whole idea [regarding] visiting hours that it could only be immediate family. Most of our patients didn't have family around. ... We almost immediately began talking about, in all of these regular meetings and sessions that we had, that maybe we needed to start letting our patients tell us who their family was, and that we needed to kind of move away from this whole idea of traditional family and biological family.

Volberding: I think that the patients were so sick — and they were so in need of support — that the idea of visiting hours and keeping people away didn't make sense.

Morrison: There were times when they were alone in their rooms and they always needed something. They were very anxious. It not only made them more comfortable, it made our lives a lot easier having people that were there in the rooms most of the time.

On the bond that existed among 5B staff members

On how the homophobia of the time influenced patient care 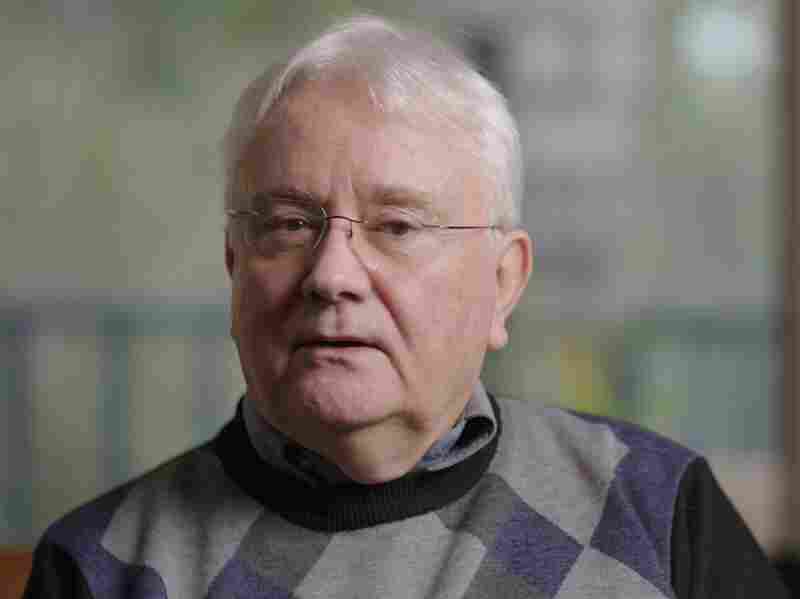 Appalled by the way patients with AIDS were being treated by hospital personnel, nurse Cliff Morrison decided to create a dedicated unit within San Francisco General Hospital that would emphasize compassionate care. Verizon Media hide caption 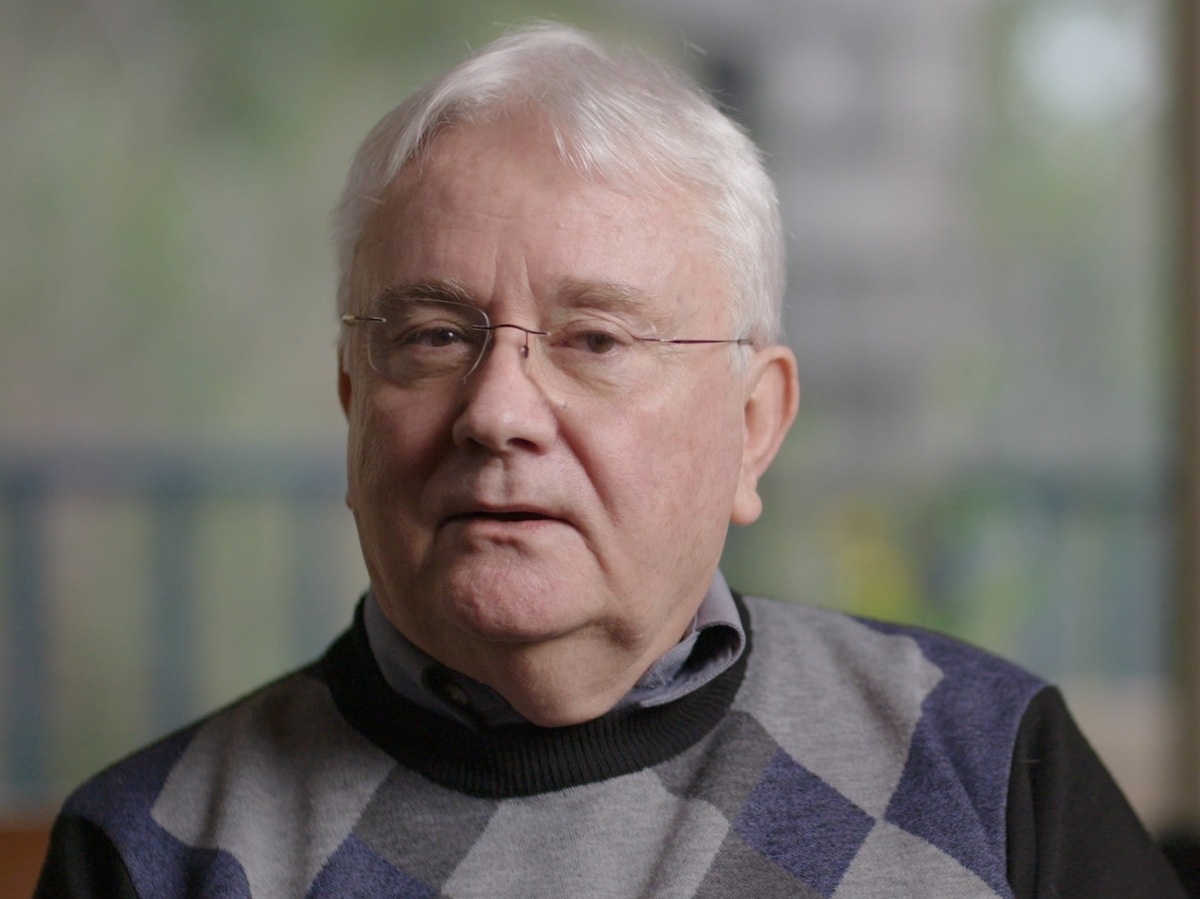 Appalled by the way patients with AIDS were being treated by hospital personnel, nurse Cliff Morrison decided to create a dedicated unit within San Francisco General Hospital that would emphasize compassionate care.

Morrison: That was, I think, probably the most glaring reality of the situation. Even in San Francisco — which, even at that time was considered the gay mecca — gay people had very established careers and homes and families, and yet all of that started coming apart. And it really was centered around homophobia. There were people in the hospital that should have known better. ... There was a group of nurses that basically said that what we were doing was crazy and that we were putting all of them at risk. It went before the labor board — but that was all homophobia.

On the evolution of AIDS treatment

Volberding: In 1987 we began to have some drugs that were doing something. ... And then, by 1996, the so-called triple therapy was developed and that was really a turning point in the epidemic. We could suddenly start seeing some of our patients actually get better — not just die more slowly, but actually get better.

The change from the early days and seeing the drugs being developed and now seeing that this is truly a chronic condition is, I think, one of the most amazing stories we'll ever hear from in medicine.

And some of those people are still alive today. The effort since '96 has been to take those potent drugs and make them less toxic and more convenient. Today, we treat this very typically with what we call single tab regimens — one pill taken once a day that contains two, three or even four drugs — all in the same pill. Many of my patients don't have any side effects at all from the medicines they're taking. The change from the early days, and seeing the drugs being developed, and now seeing that this is truly a chronic condition is, I think, one of the most amazing stories we'll ever hear from in medicine.

Amy Salit and Mooj Zadie produced and edited the audio of this interview. Bridget Bentz, Molly Seavy-Nesper and Deborah Franklin adapted it for the Web.