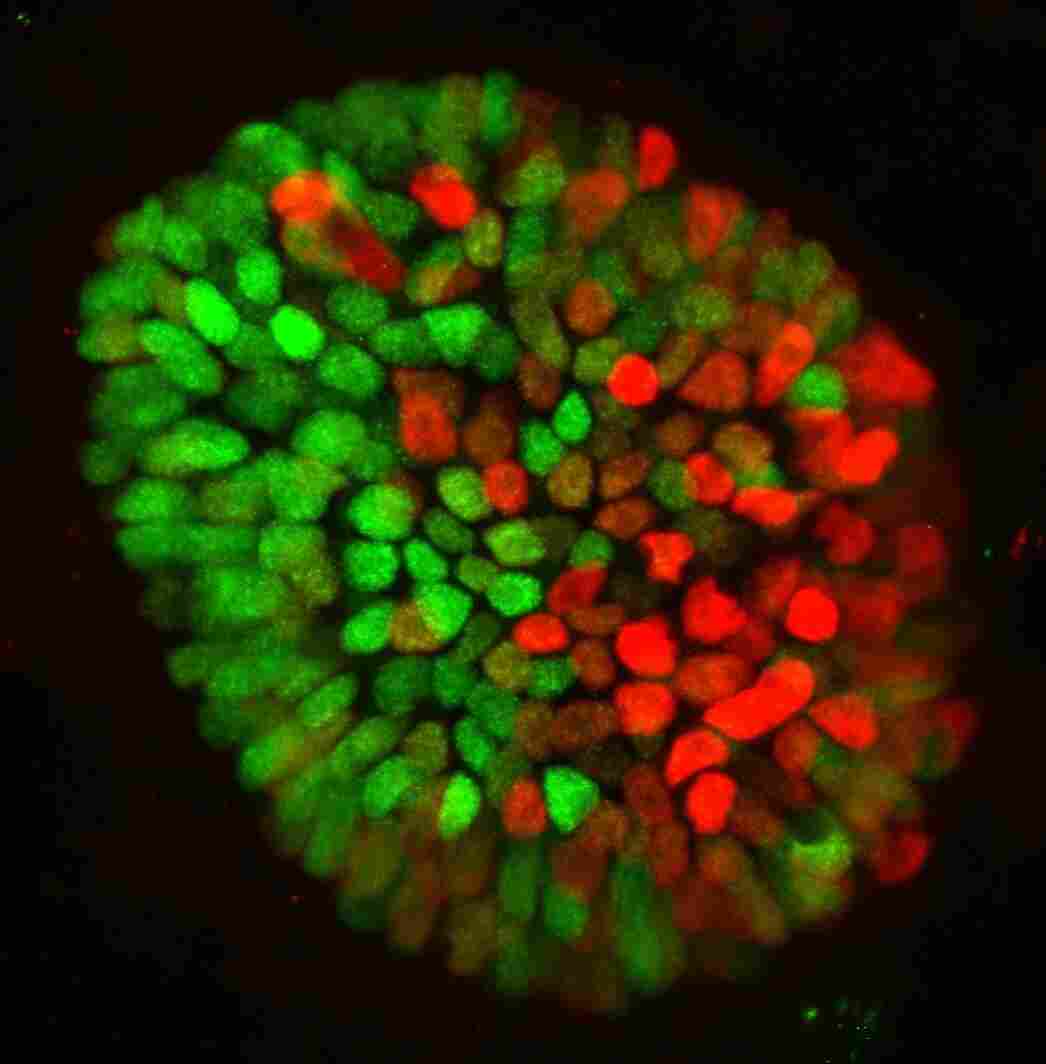 Using embryonic stem cells, researchers created a structure that mimics the earliest stages of human development in the womb. This image shows the structure breaking the symmetry of the sphere, which starts the development of more complex structures that eventually develop into a fetus. Mijo Simunovic, Ph.D., Simons Junior Fellow, The Rockefeller University hide caption 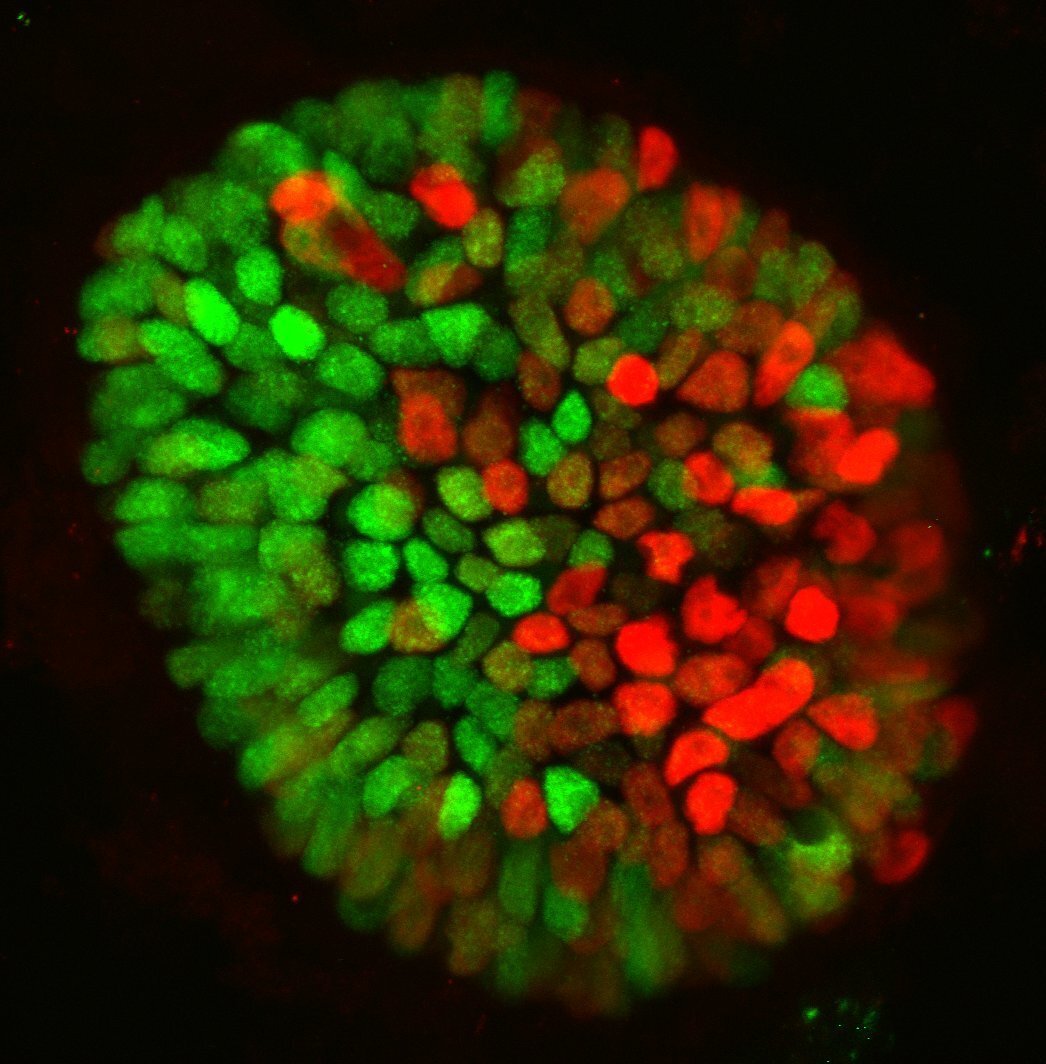 Using embryonic stem cells, researchers created a structure that mimics the earliest stages of human development in the womb. This image shows the structure breaking the symmetry of the sphere, which starts the development of more complex structures that eventually develop into a fetus.

Scientists have created living entities that resemble very primitive human embryos, the most advanced example of these structures yet created in a lab.

The researchers hope these creations, made from human embryonic stem cells, will provide crucial new insights into human development and lead to new ways to treat infertility and prevent miscarriages, birth defects and many diseases. The researchers say this is the first time scientists have created living models of human embryos with three-dimensional structures.

The researchers reported their findings Monday in a paper published in the journal Nature Cell Biology.

But the research is stirring debate about how far scientists should go in creating living models of human embryos, sometimes called embryoids.

"It's very exciting work," says Insoo Hyun, a bioethicist at the Case Western Reserve University and Harvard Medical School who was not involved in the research. "But it does send folks down the road to thinking very seriously about where the limits may be ethically for this work."

For decades, scientists have worked to understand some of the earliest steps that enable an embryo to develop into a fetus. But some of the most crucial ones have been a mystery. That's because they occur in a woman's womb and can't be studied. Scientists are prohibited from studying human embryos in their labs beyond 14 days of development.

As a result, these very early stages of development have been "a complete black box," says Ali Brivanlou, a molecular biologist at Rockefeller University in New York who heads the lab where the new research was conducted.

So Brivanlou and his colleagues decided to try to use human embryonic stem cells to create living models of human embryos they could study in the lab.

The researchers placed human embryonic stem cells into dishes containing a gel and added a protein to coax the cells into organizing themselves into three-dimensional hollow balls that resemble early embryos.

"Our experimental model looks like a ball — a shell — of cells. This is more or less what the embryonic tissue looks like at this stage," says Mijo Simunovic, the study's first author.

"This process of symmetry breaking is a major holy grail of development biology," Brivanlou says. "Life is a continuation of symmetry-breaking events."

Finally being able to re-create and now study that first symmetry-breaking moment is thrilling, humbling and "mind blowing," he says. "I really feel like I'm looking at one of the most mysterious aspects of our own existence."

Brivanlou, Simunovic and their colleagues hope their creations will lead to fundamental discoveries that could have many implications, including a better understanding of the origins of many diseases.

"We're very excited about this," Simunovic says. "This is the first time we've been able to achieve this."

"Scientifically, this research is important," says Dr. George Daley, a leading stem-cell scientist and the dean of the Harvard Medical School. "We really don't have access to the earliest stages of development. And here we have this remarkable tool in a petri dish."

But Daley and Hyun say this kind of research has already started to raise some questions.

"The question becomes: How long do you allow these structures to develop and when do they start to raise some of the ethical challenges that we've seen in the history of human embryo biology?" Daley says.

A long-standing guideline known as the 14-day rule prohibits scientists from thoroughly studying these and more advanced structures in real human embryos in their labs, because they have to discontinue their experiments after 14 days. Brivanlou's synthetic embryos may eventually get close to something equivalent to a real 14-day-old human embryo, and beyond.

"It certainly hints that science is headed towards a challenge to that rule," Daley says.

"As the embryo models become much more complete and much further along in showing us how the human body develops after fertilization, one might begin to wonder: At what point do these models effectively just become the real thing?" Hyun says.

In fact, the embryoids have shown early signs of a crucial structure known as the primitive streak, which is another cutoff for studying human embryos in the lab.

"The research is unpredictable. The cells are self-organizing in a way that sometimes surprises the researchers — they get a level of complexity that they did not expect," Hyun says. "There are dangers lurking ahead."

Because of this, the International Society for Stem Cell Research is planning to revise its guidelines for this kind of research, Daley says.

"It's time to start to think about reevaluating the limits on these kinds of experiments," Daley says. "The science has progressed to the point where those guidelines now have to look again at the 14-day rule."

The Rockefeller University scientists agree that researchers and bioethicists need to discuss the issues raised by this research. But they insists the models do not have the same moral status of a human embryo and are nowhere near anything that could ever become a baby.

"These are not actual human embryos," Simunovic says. "And they would never become human embryos if we let them grow."

But the researchers do plan to try to develop even more sophisticated embryoids.

"Now we build up this model with complexity to study more complex events," Simunovic says.