Accessibility links
Abortion Access Expanded By Maine's Newly Elected Democrats : Shots - Health News Maine elected a wave of Democratic women to state office in 2018. They've pushed Maine to join a handful of other states shoring up the right to an abortion ahead of expected Supreme Court challenges. 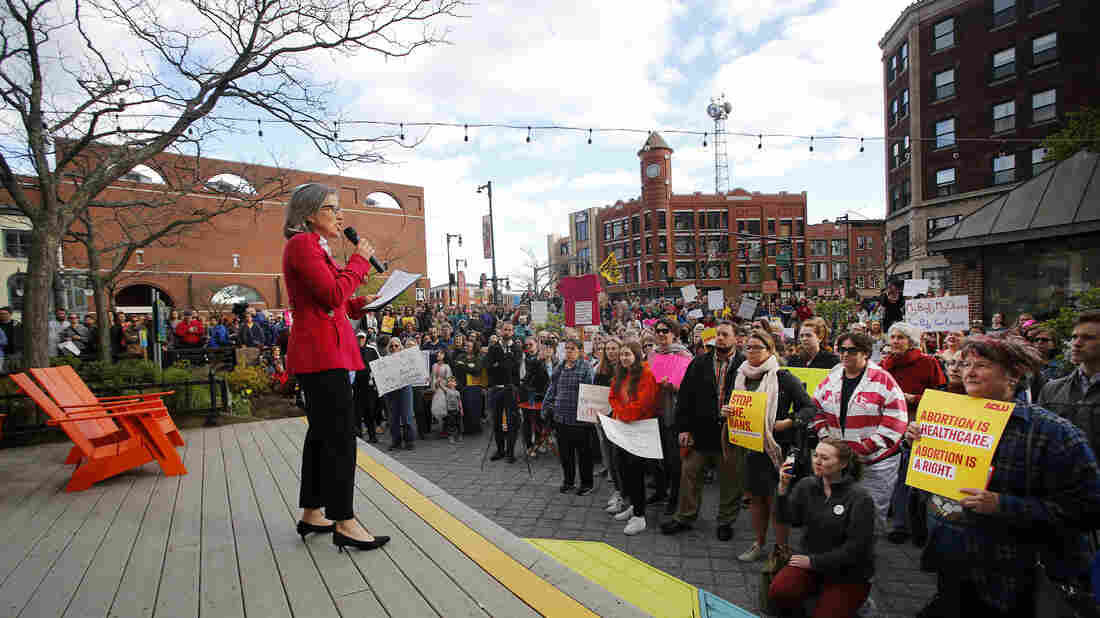 Alison Beyea of ACLU of Maine speaks during an abortion-rights rally at Congress Square Park in Portland, Maine, in May. Democrats elected last November have pushed through two laws that expand access to abortion in the state. Derek Davis/Portland Press Herald via Getty Images hide caption 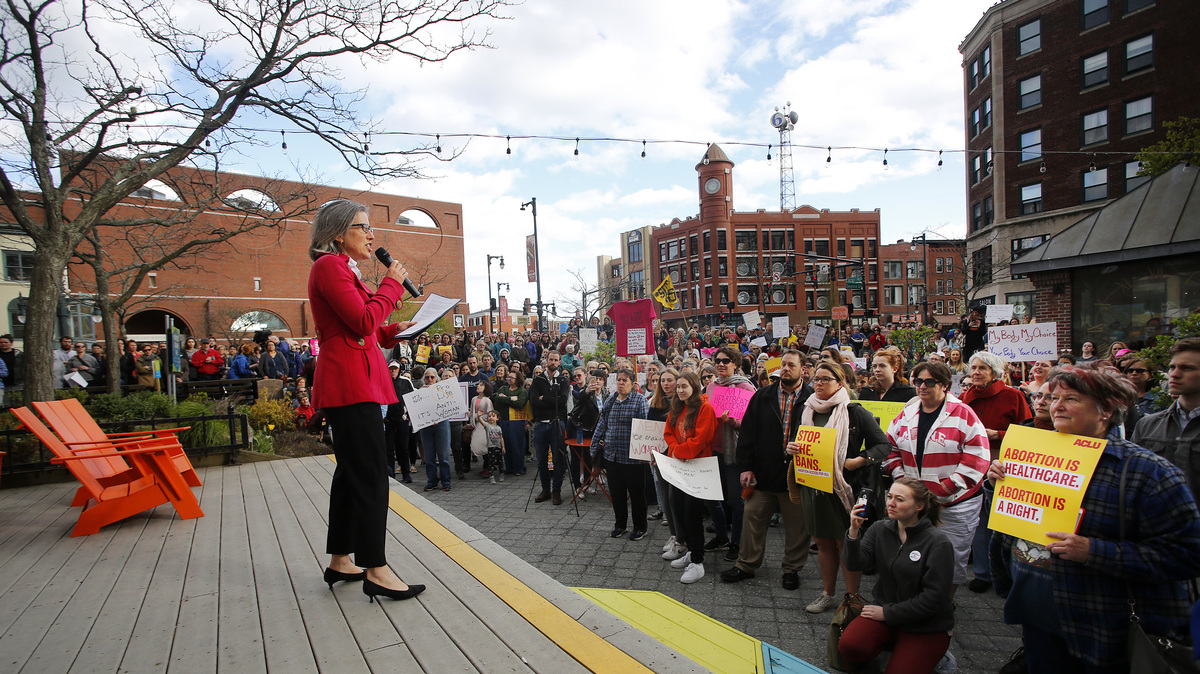 Alison Beyea of ACLU of Maine speaks during an abortion-rights rally at Congress Square Park in Portland, Maine, in May. Democrats elected last November have pushed through two laws that expand access to abortion in the state.

While abortion bans in Republican-led states dominated headlines in recent weeks, a handful of other states have passed laws to expand abortion access. Maine joined those ranks in June with two new laws — one requires all insurance and Medicaid to cover the procedure and the other allows physician assistants and nurses with advanced training to perform it.

With these laws, Maine joins New York, Illinois, Rhode Island and Vermont as states that are trying to shore up the right to abortion in advance of an expected U.S. Supreme Court challenge. But what sets Maine apart from the other states is how recently Democrats have taken power.

"Elections matter," says Nicole Clegg of Planned Parenthood of Northern New England. "In 2018, we saw the largest number of women get elected to our legislature. We saw an overwhelming majority of elected officials who support reproductive rights and access to reproductive health care."

Where U.S. Battles Over Abortion Will Play Out In 2019

The dramatic political change also saw Maine elect its first female governor, Janet Mills, a Democrat who took over from Paul LePage, a Tea Party stalwart who served two terms. LePage had blocked Medicaid expansion in the state even after voters approved it in a referendum.

Clegg and other supporters of abortion rights have hailed the new abortion legislation as a big win.

"It will be the single most important event since Roe v. Wade in the state of Maine," Clegg says.

Taken together, the intent of the two laws is to make it easier for women to afford and find abortion care in the rural state.

Nurse practitioners like Julie Jenkins, who works in a small coastal town, say that increasing the number of abortion providers will make it easier for patients who now have to travel long distances in Maine to get the procedure from a doctor.

"Five hours to get to a provider and back — that's not unheard of," Jenkins says.

Under the law set to go into effect in September, physician assistants and nurses with advanced training will be able to perform a surgical form of the procedure known as an aspiration abortion. These clinicians already are allowed to use the same technique in other circumstances, such as when a woman has a miscarriage.

Maine's other new law will require all insurance plans — including Medicaid — to cover abortions and is supposed to be implemented early next year. Kate Brogan of Maine Family Planning says this legislation is a workaround for dealing with the U.S. law known as the Hyde Amendment, which prohibits federal funding for abortions except in extreme circumstances.

"That is a policy decision that we think coerces women into continuing pregnancies that they don't want to continue," Brogan says. "Because if you continue your pregnancy, Medicaid will cover it. But if you want to end your pregnancy, you have to come up with the money [to pay for an abortion]."

State dollars, not federal, will pay for the abortions performed through Maine's Medicaid program (in general, Medicaid is funded by both state and federal tax dollars).

Though the bill passed in the Democratic-controlled Legislature, it faced staunch opposition from Republicans, including state Sen. Lisa Keim, during floor debates.

"Maine people should not be forced to have their hard-earned tax dollars [used] to take the life of a living pre-born child," Keim says.

Instead, Keim argues, abortions for low-income women should be funded by supporters who wish to donate money. Otherwise, she said during the debate, the religious convictions of abortion opponents are at risk.

"Our decision today cannot be to strip the religious liberty of Maine people through taxation," Keim says.

Rep. Beth O'Connor, a Republican who says she personally opposes abortion but believes women should have a choice, says she had safety concerns about letting clinicians who are not doctors provide abortions.

"I think this is very risky, and I think it puts the woman's health at risk," O'Connor says.

In contrast, advanced-practice clinicians say the legislation merely allows them to operate to the full scope of their expertise and expands patients' access to important health procedures. The measure also has the backing of physician groups, including the Maine Medical Association.

Just as state laws restricting abortion are being challenged, so are Maine's new laws. Days after Maine's law regarding Medicaid and abortion passed, organizations that oppose abortion rights announced they would mount an effort to put the issue on the ballot for a people's veto.