Accessibility links
Affordable Care Act Is Under Attack In Court Again: 5 Things To Know : Shots - Health News The ACA is again being put to the test, after a lower court judge ruled the massive health law unconstitutional. The case might yet ricochet back to the Supreme Court ahead of the 2020 election. 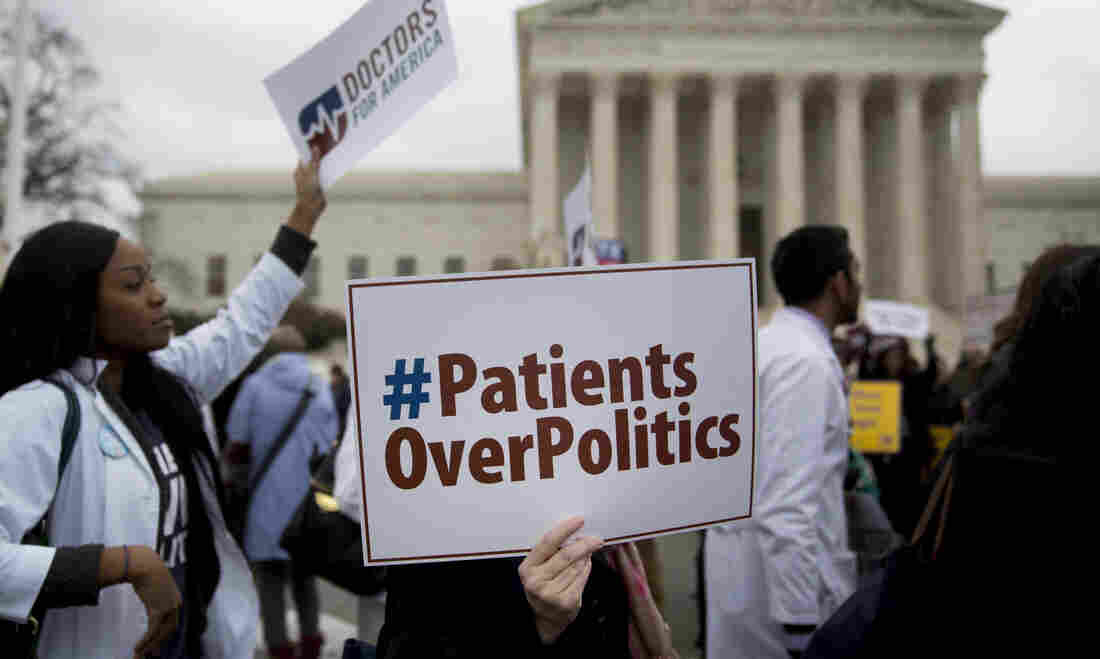 Demonstrators from Doctors for America marched in support of the Affordable Care Act outside the U.S. Supreme Court in March 2015. Now, another case aims to undo the federal health law: Texas v. United States could land in front of the Supreme Court ahead of the 2020 election. Andrew Harrer/Bloomberg via Getty Images hide caption 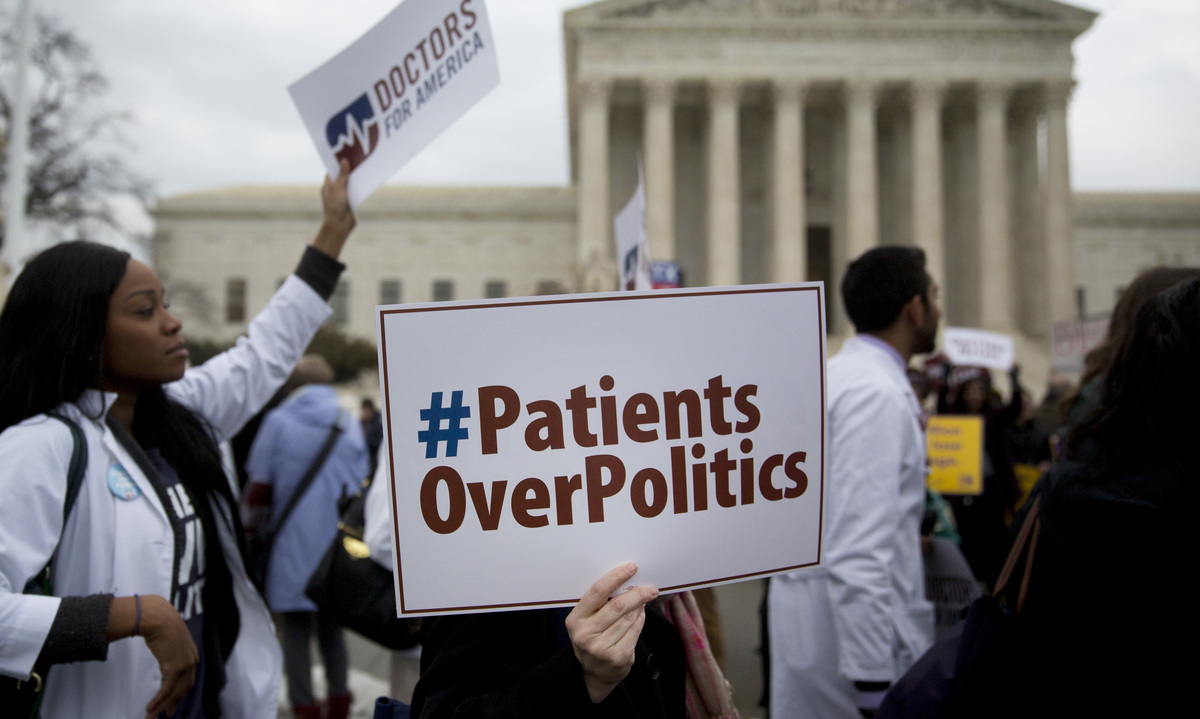 Demonstrators from Doctors for America marched in support of the Affordable Care Act outside the U.S. Supreme Court in March 2015. Now, another case aims to undo the federal health law: Texas v. United States could land in front of the Supreme Court ahead of the 2020 election.

The fate of the Affordable Care Act is again on the line Tuesday, as a federal appeals court in New Orleans takes up a case in which a lower court judge has already ruled the massive health law unconstitutional.

If the lower court ruling is ultimately upheld, the case, Texas v. United States, has the potential to shake the nation's entire health care system to its core. First, such a decision would immediately affect the estimated 20 million people who get their health coverage through programs created under the law. But ending the ACA would also create chaos in other parts of the health care system that were directly or indirectly changed under the law's multitude of provisions — including calorie counts on menus, a pathway for approval of generic copies of expensive biologic drugs and, perhaps most important politically, protections for people who have preexisting conditions.

"Billions of dollars of private and public investment — impacting every corner of the American health system — have been made based on the existence of the ACA," says a friend-of-the-court brief filed by a bipartisan group of economists and other health policy experts to the 5th Circuit Court of Appeals. Upholding the lower court's ruling, the scholars add, "would upend all of those settled expectations and throw healthcare markets, and 1/5 of the economy, into chaos."

Here are five important facts to know about the case:

It was prompted by the tax bill Republicans passed in 2017.

The big tax cut bill passed by the GOP Congress in December 2017 eliminated the penalty included in the ACA for failure to maintain health insurance coverage. This lawsuit, Texas v. United States, was filed in February 2018 by a group of Republican attorneys general and two governors. They argued that since the U.S. Supreme Court had upheld the ACA in 2012 specifically because it was a valid exercise of Congress' taxing power, taking the tax away makes the entire rest of the law unconstitutional.

Last December, Judge Reed C. O'Connor agreed with the Republicans. "In some ways the question before the court involves the intent of both the 2010 and 2017 Congresses," O'Connor wrote in his decision. "The former enacted the ACA. The latter sawed off the last leg it stood on."

State and federal Democrats are defending the Affordable Care Act.

A group of Democratic attorneys general, led by California's Xavier Becerra, is arguing that the rest of the ACA remains valid, despite the Republican tax cut legislation.

"Our argument is simple," Becerra said in a written statement released Friday. "The health and wellbeing of nearly every American is at risk. Health care can mean the difference between life and death, financial stability and bankruptcy. Our families' wellbeing should not be treated as a political football."

The Democratic-led House of Representatives has also been granted intervenor status in the case.

The Trump administration has taken several positions on the lawsuit.

The defendant in the case is technically the Trump administration. Traditionally, an administration — even one that did not work to pass the law in question — defends existing law in court.

Not this time. And it is still unclear exactly what the administration's position is on the lawsuit. "They have changed their position several times," Sen. Chris Murphy, D-Conn., told reporters on a conference call Monday.

When the administration first weighed in on the case, in June 2018, it said it believed that without the tax penalty only the ACA provisions most closely connected to that penalty — including requiring insurers to sell policies to people with preexisting conditions — should be struck down. The rest of the law should stay, the Justice Department argued.

After O'Connor's ruling, however, the administration changed its mind. In March, a spokeswoman for the Justice Department said it had "determined that the district court's comprehensive opinion came to the correct conclusion and will support it on appeal."

Now it appears the administration is shifting its opinion on the ACA again. In a filing with the court late last week, Justice Department attorneys argued that perhaps the health law should be invalidated only in the GOP states that are suing, rather than all states. It is unclear how that would work.

Legal scholars — including those who oppose the ACA — consider the Texas case dubious.

In a brief filed with the appeals court, legal scholars from both sides of the fight over the ACA agreed that the Texas lawsuit's underlying claim makes no sense.

In passing the tax bill that eliminated the ACA's tax penalty but nothing else, Congress "made the judgment that it wanted the insurance reforms and the rest of the ACA to remain even in the absence of an enforceable insurance mandate," wrote law professors Jonathan Adler, Nicholas Bagley, Abbe Gluck and Ilya Somin. Bagley and Gluck are supporters of the ACA; Adler and Somin have argued against it in earlier suits. "Congress itself — not a court — eliminated enforcement of the provision in question and left the rest of the statute standing. So congressional intent is clear."

The ACA could end up in front of the Supreme Court right in the middle of the 2020 election.

Depending on what happens at the appeals court level, the health law could be back in front of the Supreme Court — which has upheld the health law on other grounds in 2012 and 2015 — and land there in the middle of next year's presidential campaign.

Democrats are already sharpening their rhetoric for that possibility.