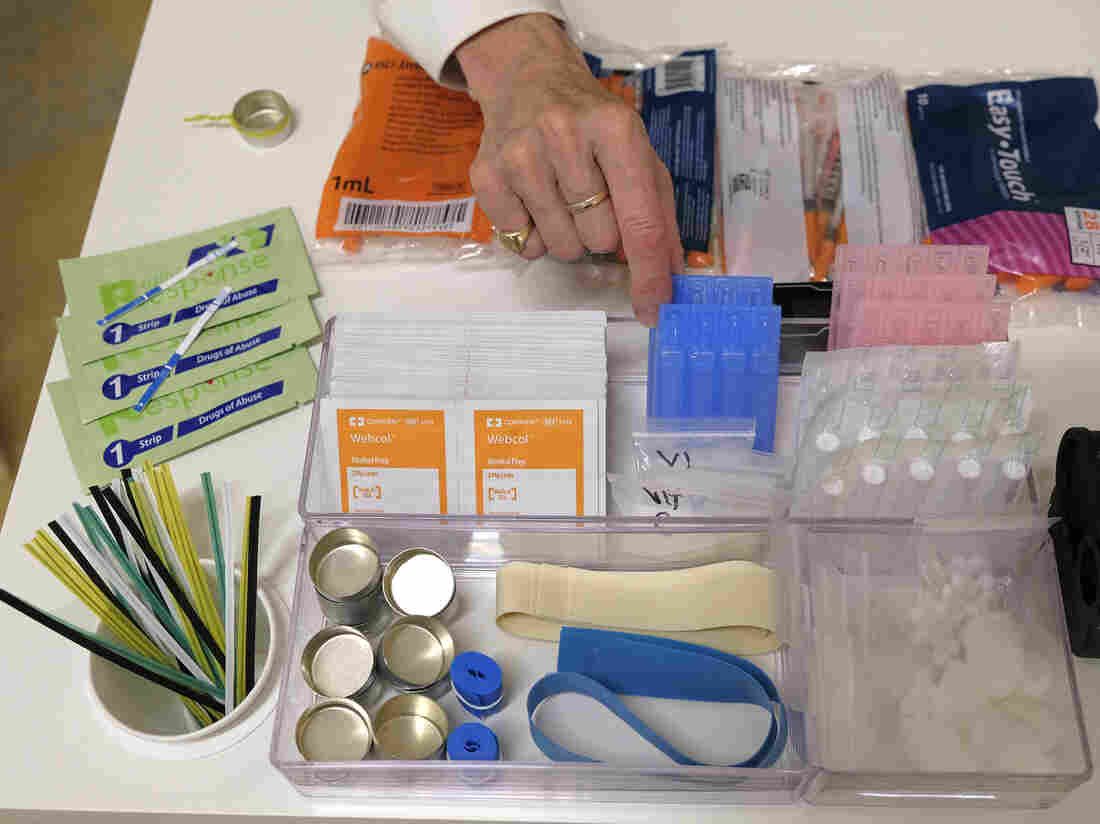 Supplies sit on a check-in desk at a model of a hypothetical injection site in San Francisco, pictured here in September 2018. Local leaders from San Francisco are among a dozen local officials urging a federal court to allow an effort to open a supervised injection site in Philadelphia. Eric Risberg/AP hide caption 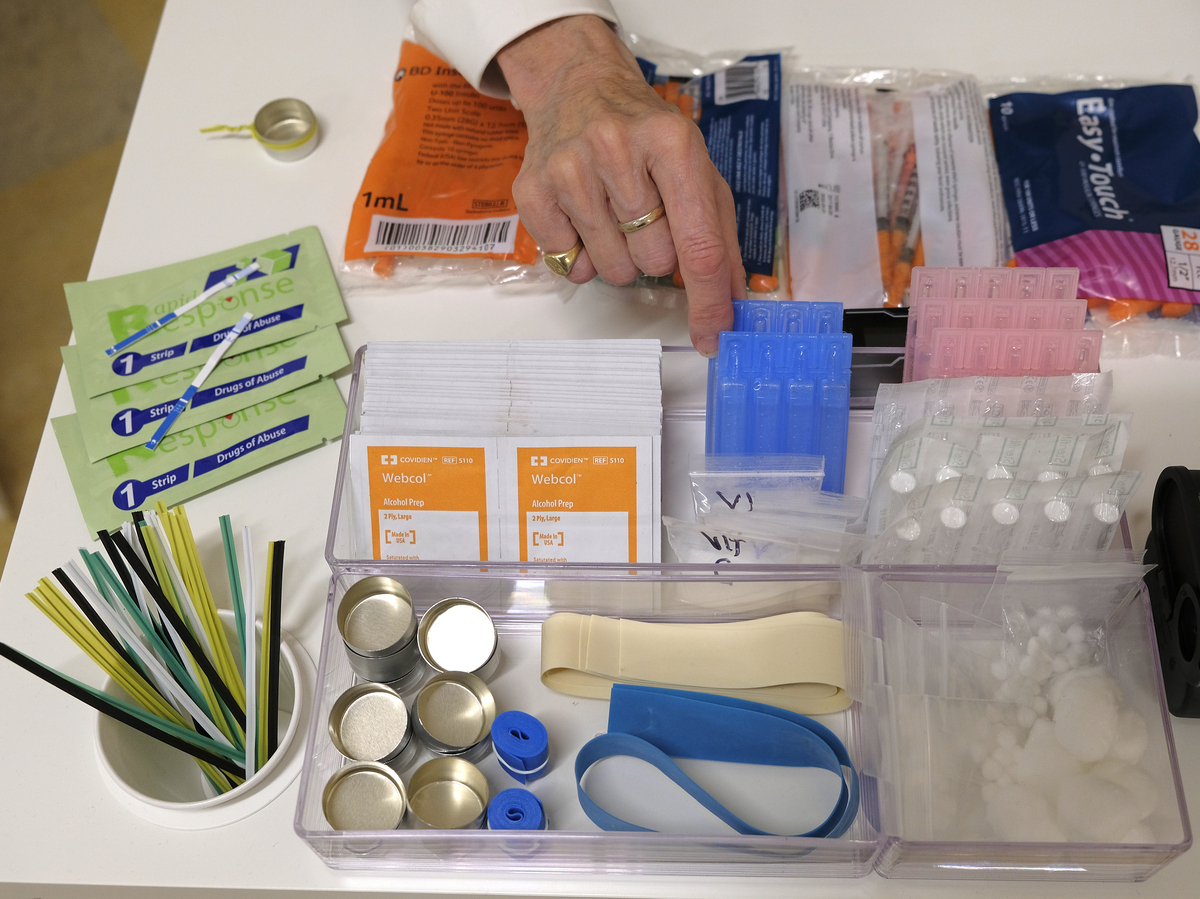 Top officials from 13 states are joining Philadelphia in urging a federal court to allow a site to open where people can inject illegal opioids under medical supervision, the latest escalation in a legal battle with the Justice Department that may determine whether such facilities, known as supervised injection sites, can start to operate in America.

In Philadelphia, where drug overdoses — most involving opioids — kill three times as many people as homicides, a nonprofit called Safehouse has been working to launch an injection site as a way of combating the city's opioid crisis.

But the Justice Department has mounted a legal challenge to block it before it opens, claiming such a site violates federal drug laws and would enable drug use.

A friend-of-the-court brief submitted Wednesday by leaders from five cities — Ithaca, New York City, Pittsburgh, San Francisco and Seattle — says injection sites, widely used in parts of Canada and Europe, need to be part of the way cities respond to the opioid crisis.

"The opioid crisis has taken a major toll on American cities and counties, including ours," the city leaders wrote. "Despite our efforts, the existing methods of combating the opioid crisis have proven to be too little, or at least too late, for far too many of our residents."

In a separate brief, attorneys general from Washington, D.C., and seven states including Michigan, New Mexico and Oregon also urged the court to allow the injection site to open. "As laboratories of experimentation and the primary regulators of public health, States should be free to adopt cutting-edge medical interventions," the top state law enforcement officials wrote. The other top state law enforcement officials who signed on to the brief are from Delaware, Minnesota, Virginia and Colorado.

The opioid crisis has also resulted in an alarming death rate in the cities that are exploring injection sites like the one Philadelphia is pursuing.

But legal uncertainty and other issues have slowed the efforts to open supervised injection sites. However, city leaders say they believe no other option is able to put a significant dent in lethal overdoses.

"These trends have continued despite extensive efforts by local governments and health departments to curb the crisis, including policies to expand medication-assisted treatment, clean needle exchanges, and the distribution of naloxone to first responders and public health workers," the city officials wrote.

Justice Department officials have stated that the idea of a supervised injection site violates so-called crack house laws that make it a crime to own a property where drugs are being used, but Safehouse planners and an alliance of local leaders counter that statutes from the 1980s were never intended to apply to what they view as a medical facility in the midst of a public health crisis.

The city leaders write that the sites "would be places where drug users can obtain medical supervision and treatment. The act of allowing drug users to [inject drugs] in a supervised environment where they can be rescued if needed, rather than on the street or in a restroom stall."

A barrage of other briefs were also filed to the federal court in Philadelphia on Wednesday both in support of and opposing the proposed site. Among them, one written by a group of 64 current and former law enforcement officials, including former Justice Department officials, claiming that federal prosecutors were "distorting federal drug laws" in trying to shut down the country's first attempt at opening a supervised injection site.

But a group of six neighborhood associations around the Philadelphia neighborhood of Kensington, the heart of the city's opioid crisis and the preferred location of the injection site, wrote a brief pleading with the court to not allow the site in their community, fearing such a facility would invite additional crime and drug trafficking.

"Law abiding citizens walking to and from work and young children traveling to school face the risk of getting caught in the violence and become targets for the dealers looking to increase their customer base," wrote the neighborhood group, which filed the brief along with the city's Fraternal Order of Police.

"The police, who are experts in this area, know what Congress knew. They know from bitter experiences that concentrating drug use in a place like the one that Safehouse proposes will bring more addicts, more dealers and more violent crime to neighborhoods that are already suffering," the brief says.

Yet, the brief from the states' attorneys generals argues that studies have shown that injection sites have proved to save lives in other countries, and that it is time for the U.S. to give the controversial measure a chance.

"States that are home to metropolitan areas should be free to experiment with this potentially lifesaving intervention, as well as others, without fear that public health nonprofits or doctors in their jurisdictions will be subject to prosecution," the group wrote.

The case is pending in Philadelphia before U.S. District Judge Gerald A. McHugh, who will rule sometime after a July 22 filing deadline.