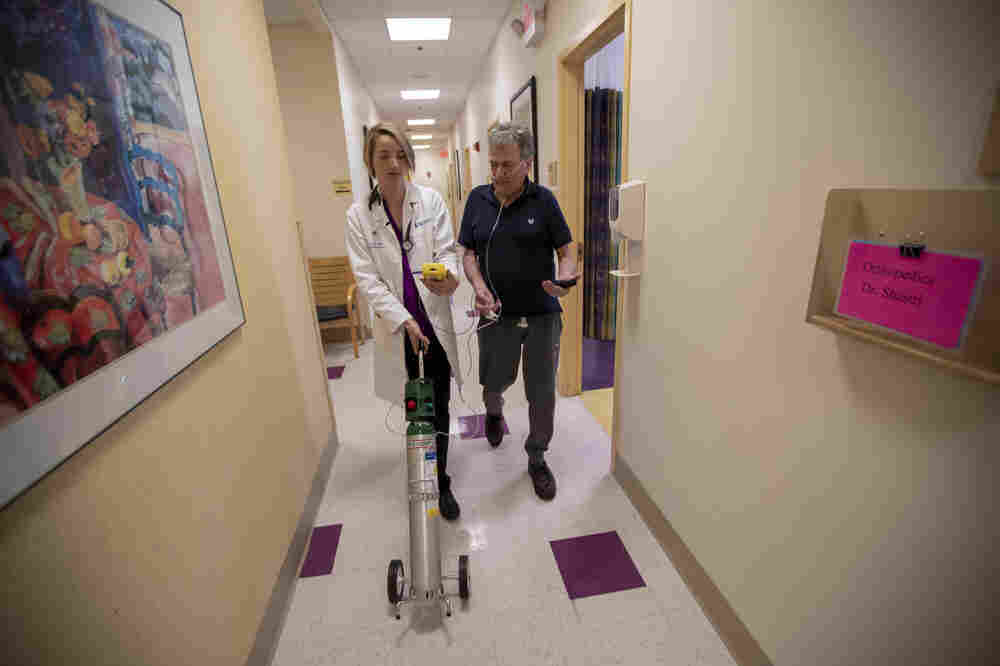 Dr. Mary Rice walks with Michael Howard at a Beth Israel Deaconess HealthCare clinic in Chealsea, Mass, as they test his oxygen levels with the addition of oxygen from a portable tank. He has COPD, a progressive lung disease that can be exacerbated by heat and humidity. Jesse Costa/WBUR hide caption 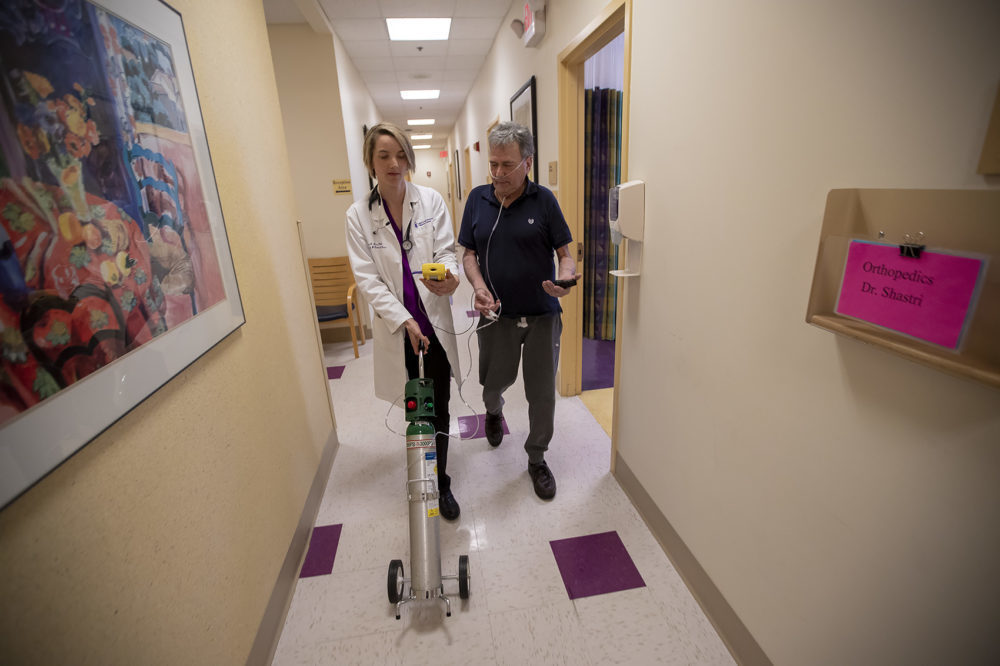 Dr. Mary Rice walks with Michael Howard at a Beth Israel Deaconess HealthCare clinic in Chealsea, Mass, as they test his oxygen levels with the addition of oxygen from a portable tank. He has COPD, a progressive lung disease that can be exacerbated by heat and humidity.

When Michael Howard arrives for a checkup with his lung specialist, he's worried about how his body will cope with the heat and humidity of a Boston summer.

"I lived in Florida for 14 years and I moved back because the humidity was just too much," Howard tells pulmonologist Mary Rice, as he settles into an exam room chair at a Beth Israel Deaconess HealthCare clinic.

Howard, who is 57, has COPD, a progressive lung disease that can be exacerbated by heat and humidity. Even inside a comfortable, climate-controlled room, his oxygen levels worry Rice. Howard reluctantly agrees to try using portable oxygen. He's resigned to wearing the clear plastic tubes looped over his ears and inserted in his nostrils. He assures Rice he has an air conditioner and will stay inside on really hot days. The doctor and patient agree that Howard should take his walks in the evenings to be sure that he gets enough exercise without overheating.

Then Howard turns to Rice with a question she didn't encounter in medical school: "Can I ask you: Last summer, why was it so hot?" 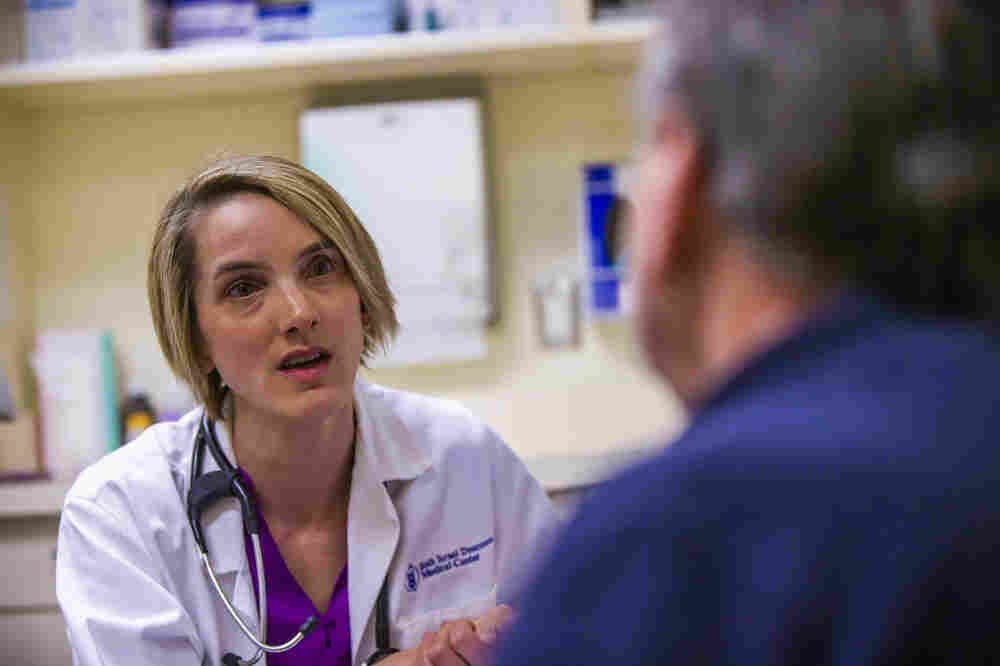 Rice, who studies the health effects of air pollution, talks with Howard about his increased breathing problems and their possible link to the heat waves, increased pollen and longer allergy seasons associated with climate change. Jesse Costa/WBUR hide caption

"The overall trend of the hotter summers that we're seeing [is] due to climate change," Rice says, "and with the overall upward trend, we've got the consequences of climate change."

For Rice, connecting those consequences — heat waves, more pollen, longer allergy seasons — to her patients' health is becoming routine. She is among a very small but growing number of doctors and nurses who discuss those connections with patients.

In June, the American Medical Association, American Academy of Pediatrics and American Heart Association were among 70 medical and public health groups that issued a call to action asking the U.S. government, business and leaders to recognize climate change as a health emergency.

"The health, safety and wellbeing of millions of people in the U.S. have already been harmed by human-caused climate change, and health risks in the future are dire without urgent action to fight climate change," the coalition statement said.

Some societies provide patient handouts that explain related health risks. But none have guidelines that explain how providers should talk to patients about climate change. There is no concrete list of "dos" — as in wear a seat belt, use sunscreen, and get exercise — or "don'ts" — as in don't smoke, don't drink too much and don't text while driving.

Climate change is different, says Rice, because an individual patient can't prevent it. So Rice focuses on steps her patients can take to cope with the consequences of heatwaves, more potent pollen and a longer allergy season.

That's Mary Heafy's main complaint. The 64-year-old has asthma that is worse during the allergy season. During her appointment with Rice, Heafy wants to discuss whether she's on the right medications. But she also wants to know why her eyes and nose are running and her chest is tight for longer periods every year.

"It feels like once [the allergy season] starts in the springtime, it doesn't end until there's a killing frost," Heafy tells Rice, with some exasperation. 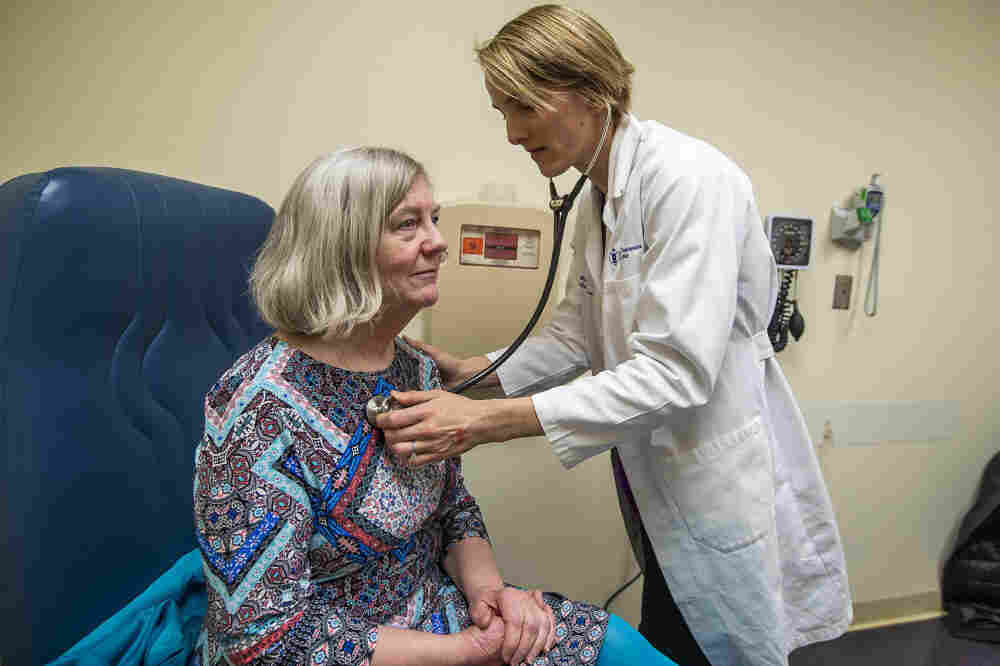 "Yes," Rice nods, "because of global warming, the plants are flowering earlier in the spring. After hot summers, the trees are releasing more pollen the following season. And the ragweed — it's extending longer into the fall."

So Heafy may need stronger medicines and more air filters, her doctor says, and may spend more days wearing a mask — although the effort of breathing through a mask is hard on her lungs as well.

As she and the doctor finalize a prescription plan, Heafy observes that "physicians talk about things like smoking, but I don't know that every physician talks about the environmental impact."

There are many reasons few do. Besides the lack of guidelines, doctors say they don't have time during a 15- to 20-minute visit to approach something as complicated as climate change.

And the topic can be controversial: While a recent Pew Research Center poll found that 59% of Americans think climate change affects their local community "a great deal or some," only 31% say it affects them personally, and views vary widely by political party.

We contacted energy-industry trade groups to ask what role — if any — medical providers should have in the climate change conversation, but neither the American Petroleum Institute nor the American Fuel and Petroleum Manufacturers returned calls or email requests for comment.

Some doctors worry about challenging a patient's beliefs on the sometimes-fraught topic, according to Dr. Nitin Damle, the past president of the American College of Physicians.

"It's a difficult conversation to have," says Damle, who practices internal medicine in Wakefield, R. I. . "Many people still think it's something they're not going to be affected by, but it's really not true."

Damle says he "takes the temperature" of patients, with some general questions about the environment or the weather, before deciding if he'll suggest that climate change is affecting their health.

Gaurab Basu, a primary care physician at Cambridge Health Alliance, says he's ready if patients want to talk about climate change, but he doesn't bring it up. Basu says he must make sure patients feel safe in the exam room. Raising a controversial political issue might erode that feeling. When patients do ask about climate change, it can be "a difficult conversation," he says.

"I have to be honest about the science and the threat that is there, and it is quite alarming," Basu says.

So alarming that Basu says he often refers patients to counseling. Psychiatrists concerned about the effects of climate change on mental health say there are no standards of care in their profession yet. They suggest a response must be tailored for each patient, but some common responses are emerging.

"We Are Hungry for Information"

One environmental group isn't waiting for doctors and nurses to figure how to talk to patients about climate change.

"We're trying to create a demand for these conversations to get started," says Molly Rauch, the public health policy director with Moms Clean Air Force, a project of the Environmental Defense Fund.

Rauch urges the group's more than one million members to ask doctors and nurses for guidance. For example: When should parents keep children indoors because the outdoor air is too dirty?

"This isn't too scary for us to hear about," Rauch says. "We are hungry for information about this, we want to know."

But Rauch says it doesn't seem like climate change is breaking into the medical community as a health issue. One study found classes about environmental health or global warming at only 20 out of 140 U.S. medical schools.

A few nursing schools are adding climate-related courses to their training, to prepare students for conversations with patients.

"Nurses need to catch up quickly," says Patrice Nicholas, director of the Center for Climate Change, Climate Justice and Health at the MGH Institute of Health Professions in Boston.

Nicholas attributes the delay, in part, to politics. "Climate change really needs to be reframed as a public health issue," Nicholas says.

The few doctors and nurses who have started discussing climate change with their patients say they've not had much pushback, but that may be because bringing climate change into the exam room is still very new.

This story is part of NPR's reporting partnership with WBUR and Kaiser Health News, an editorially independent news service of the Kaiser Family Foundation.