Accessibility links
Why You Should Put Down Your Phone And Say Hello To A Stranger : Shots - Health News Happiness, says one researcher, is the sum of many positive moments throughout the day. Something as simple as a friendly chat in the elevator can boost your mood. So put down your phone and try it. 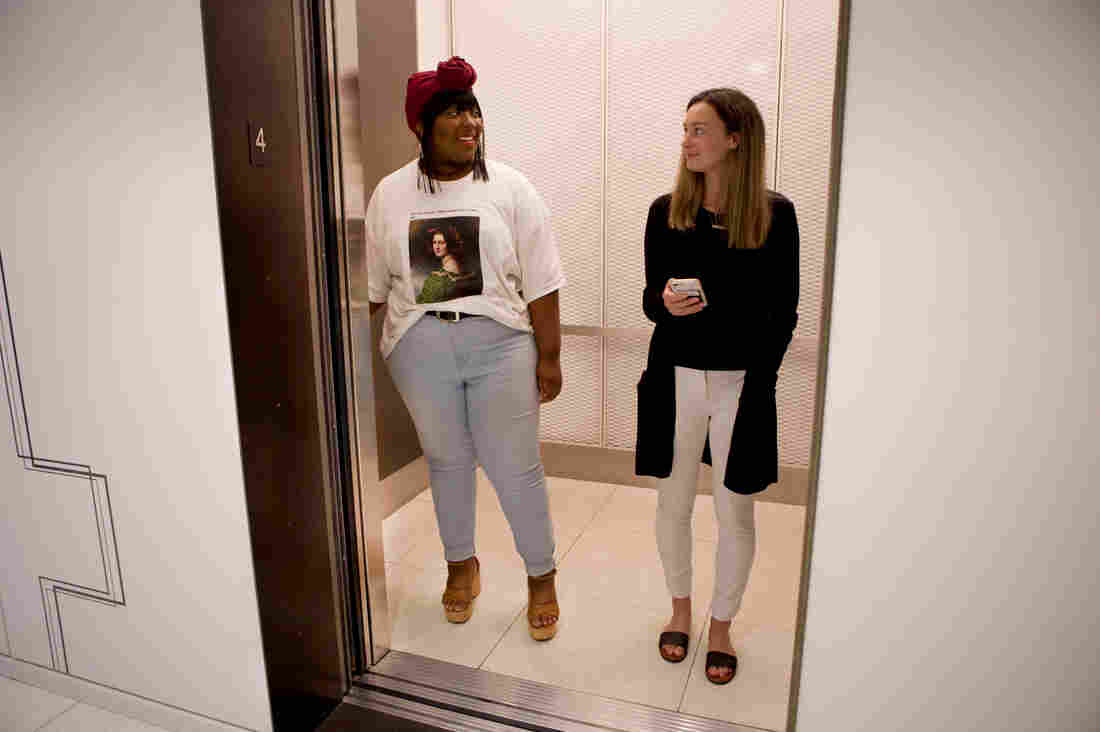 The mood boost of talking to strangers may seem fleeting, but the research on well-being, scientists say, suggests that a happy life is made up of a high frequency of positive events. Even small positive experiences — chatting with a stranger in an elevator — can make a difference. Olivia Falcigno/NPR hide caption 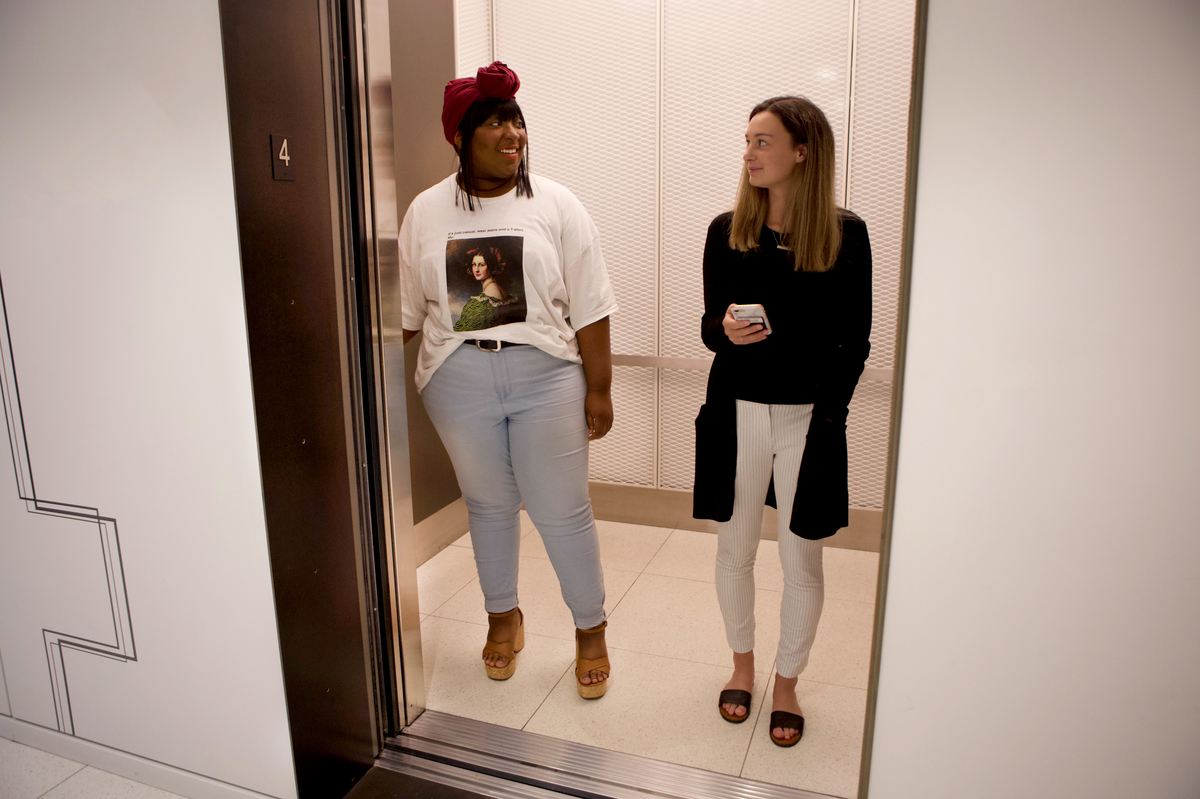 The mood boost of talking to strangers may seem fleeting, but the research on well-being, scientists say, suggests that a happy life is made up of a high frequency of positive events. Even small positive experiences — chatting with a stranger in an elevator — can make a difference.

The doors open wide, you enter, and they close behind you. As the elevator begins its ascent, you realize it's just you and one other person taking this ride. The silence soon grows uncomfortable.

A) Stare at your shoes.

B) Pull out your cellphone.

If your answer was B, you're like far too many of us, eyes glued to our phones, attention focused on the digital world.

Many of us tend to do just about anything to avoid conversation or even eye contact with strangers. And smartphones make it easier than ever to do that. A recent study found that phones can keep us from even exchanging brief smiles with people we meet in public places. But a body of research has shown that we might just be short-changing our own happiness by ignoring opportunities to connect with the people around us.

Several years ago, University of British Columbia psychologist Elizabeth Dunn and her colleague Gillian M. Sandstrom tested whether short conversations with strangers could lift moods. They asked participants to enter a busy coffee shop and grab a beverage — half would get in and get out, and half would strike up a conversation with the cashier.

"We found that people who were randomly assigned to turn this economic transaction into a quick social interaction left Starbucks in a better mood," Dunn says. "And they even felt a greater sense of belonging in their community."

The same researchers found that these seemingly trivial encounters with the minor characters in our lives — the random guy at the dog park or the barista at our local coffee shop — can affect feelings of happiness and human connection on a typical day.

From Gloom To Gratitude: 8 Skills To Cultivate Joy

Social anxiety, however, could be preventing these types of interactions, says Nicholas Epley, a University of Chicago behavioral scientist.

One day, during a daily train ride, he noticed something paradoxical. People — social creatures — were basically ignoring one another. Why, he wondered, if connecting with others makes us happy, do we so often avoid it?

Either solitude really is more enjoyable than talking to strangers, he figured, or we have mistaken assumptions holding us back.

His curiosity led to a series of experiments revealing that train and bus commuters who interacted with other passengers experienced a more pleasant ride — even when they believed they would prefer the solitude of, say, reading a book.

It is fear that the person sitting next to us won't enjoy talking to us that makes us keep to ourselves, Epley found. But when we do talk to each other, those social interactions with strangers tend to be both less awkward and more enjoyable than most people predict.

If striking up small talk with a stranger sounds daunting, you might be relieved to hear that even something as simple as making eye contact offers benefits.

No one likes feeling invisible when someone walks past. The Germans even have a term for it — wie Luft behandeln, which means "to be looked at as though air."

Kipling Williams, a Purdue University psychologist, studied how people felt when a young woman walked by them and either made eye contact, made eye contact while smiling, or completely ignored them. Even brief eye contact increased people's sense of inclusion and belonging.

"Just that brief acknowledgment, that brief glance — with or without a smile — made them at least temporarily feel more socially connected," Williams says. And it works both ways. Those that had been "looked through" felt even more disconnected than the control group.

So, how can we dodge the risks of loneliness and stop short-changing our own happiness?

Start with folks like the cashier in a grocery store or the barista at your local coffee shop, Dunn says. You've got to interact with them anyway, so you might as well make an effort to turn it into a friendly exchange.

And be mindful that using your smartphone sends a signal that you're not interested in interacting with the people around you. Put it away and you easily remove that barrier, she says.

The mood boost of talking to strangers may seem fleeting, but the research on well-being, Epley says, suggests that a happy life is made up of a high frequency of positive events, and even small positive experiences make a difference.

"Happiness seems a little bit like a leaky tire on a car," Epley explains. "We just sort of have to keep pumping it up a bit to maintain it."

This doesn't mean we need to set out on some grand quest to connect at every possible turn. Instead, he recommends paying closer attention to those times when the urge to offer a compliment or strike up a conversation arises.

Sure, there may be a bit of fear or reluctance holding us back, but it's worth overcoming.

The next time you walk into an elevator, consider leaving the phone in your pocket, acknowledging the presence of that other person, and maybe even saying "hello" or "good morning."

Who knows? It could wind up putting a smile on your face and theirs.

Paul Nicolaus is a Wisconsin-based freelance writer specializing in science, nature and health.