Accessibility links
Seizures Of Meth, Cocaine And Prescription Stimulants Surging All Around U.S. : Shots - Health News The amount of meth seized in the U.S. more than doubled from 2017 to 2018. That translates to lots more meth, along with cocaine and other stimulants, on the streets — and likely more deaths. 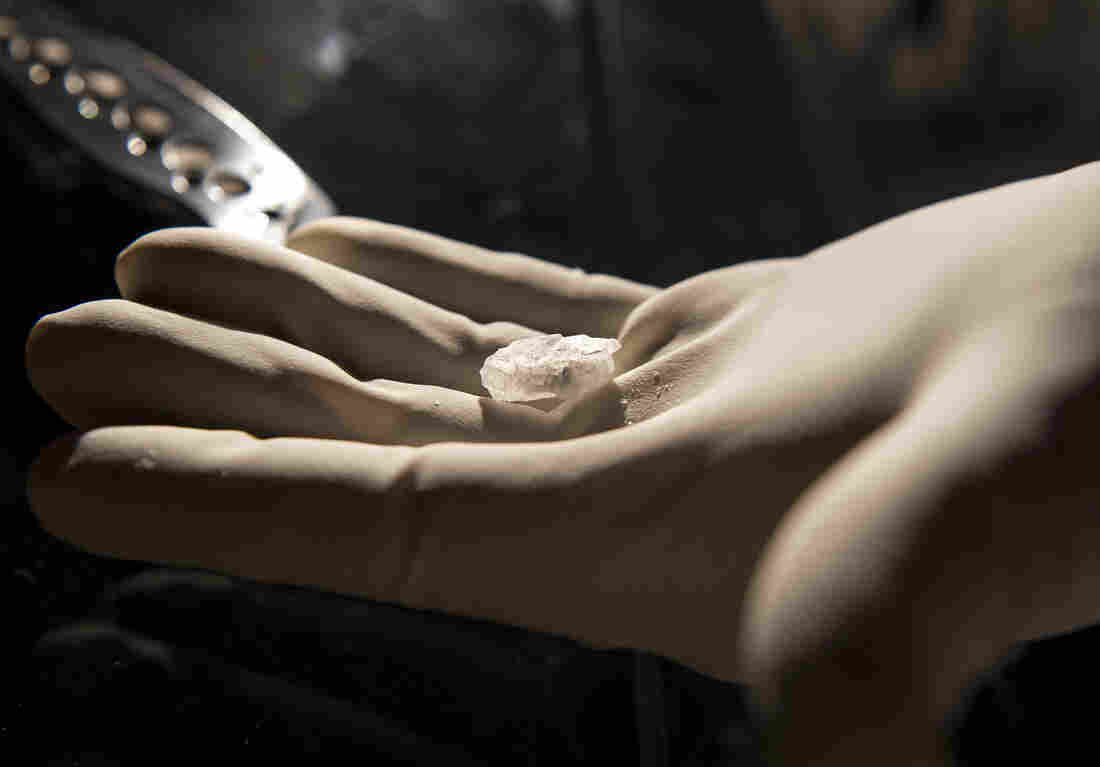 A rock of crystal methamphetamine lifted from a suspect in Orange County, Calif. This fall, the Centers for Disease Control and Prevention expects to begin collecting more local information about the rising use of meth, cocaine and other stimulants. Leonard Ortiz/Getty Images hide caption

Methamphetamine, an illegal drug that sends the body into overdrive, is surging through the United States. Federal drug data provided exclusively to NPR show seizures of meth by authorities have spiked, rising 142% between 2017 and 2018.

"Seizures indicate increasing trafficking in these drugs," says John Eadie, public health coordinator for the federal government's National Emerging Threats Initiative, part of the High Intensity Drug Trafficking Areas program. "So if seizures have more than doubled, it probably means more than double trafficking in methamphetamines. And with that go additional deaths."

Overdose deaths involving meth and other psychostimulants did rise last year — by 21% (to 12,987 from 10,749 in 2017) — according to provisional data from the Centers for Disease Control and Prevention. Deaths from cocaine and fentanyl were up too. But overdose deaths dropped overall because of a decline in the number of fatalities tied to pain pills.

For decades, meth has been associated with working-class Americans trying to hold down two or more jobs and has been popular in some gay communities, but it hasn't been widely available in every region of the country. Now that's changing too. Seizures of meth are up, sometimes dramatically, in pockets of nearly every state in the U.S., based on data collected in 32 High Intensity Drug Trafficking Areas.

"It was all about the meth"

There are many paths to meth use. Some drug users say they take it to pick themselves up after taking downers: heroin or fentanyl. Those on the streets say they take it to stay awake at night and avoid rape or robbery. Meth offers a relatively cheap high that can last days. That means fewer injections and less worry about finding money for the next hit. And some drug users pick up meth because they are terrified of fentanyl, the opioid that can shut down breathing in seconds. 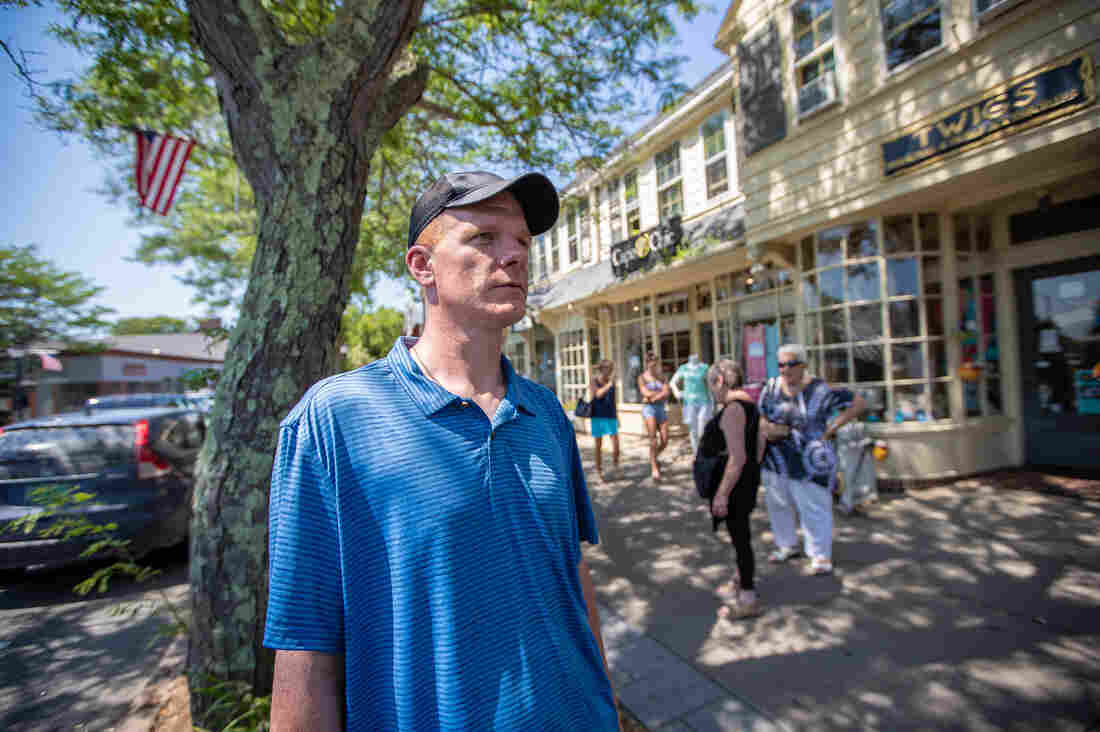 Mike Leslie, in Falmouth, Mass., no longer uses any drugs to get high. But he says that of all the opioids and stimulants he has used, meth wrecked his life so fast that he hardly knew what was happening. Jesse Costa for NPR hide caption

"I knew if I went back to using fentanyl, I would likely overdose and die," says Mike Leslie, 37, who has overdosed on fentanyl twice.

Leslie found his way to meth after more than 20 years of drug use that started with marijuana and alcohol, progressed to cocaine and then led to opioids: pain pills, heroin and fentanyl. Leslie had been off fentanyl for about four years last fall when he ran into an old acquaintance on the streets of Boston and that urge to get high took over.

"He was selling meth. It was basically the one thing out there that I hadn't tried," Leslie says. "Now it was readily available. So I tried it."

Leslie says meth wrecked his life so fast that he hardly knew what was happening. He'd kept working while on heroin, but four months after his first hit of meth, he had lost his job as a recovery outreach worker, had dropped out of graduate school and was sleeping on the floor of a train station.

"As soon as I tried it, I was no longer functioning," Leslie says. "It was all about the meth." 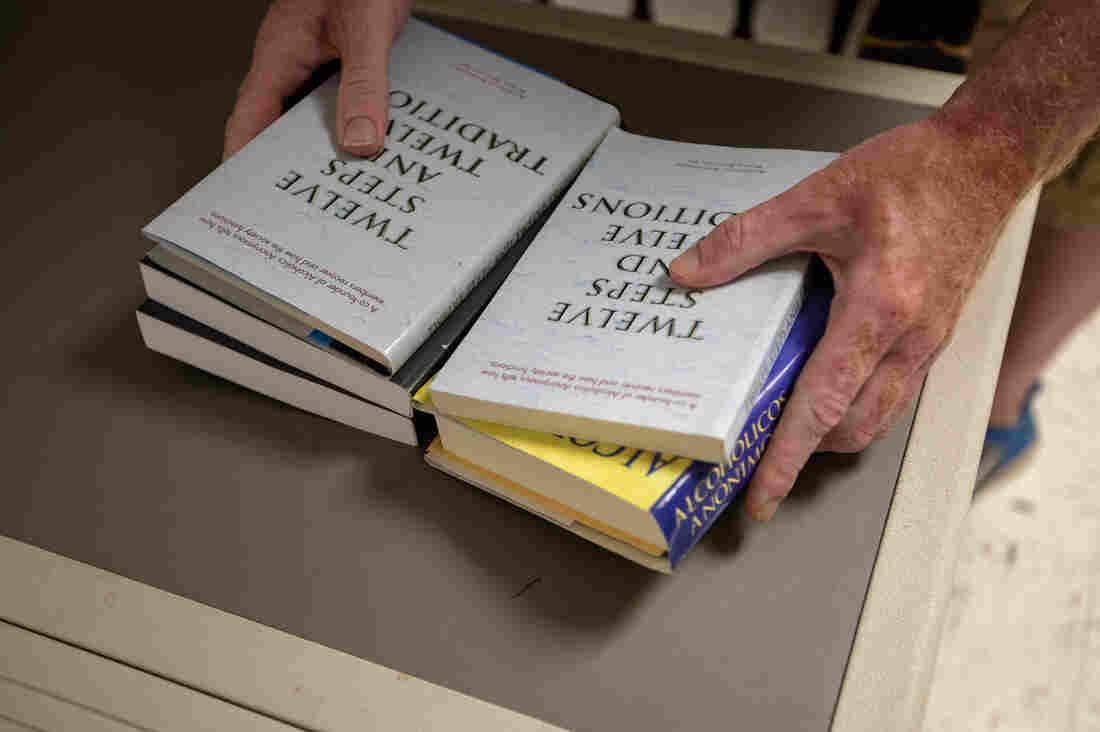 Leslie sets out books for a 12-step meeting at Saint Patrick's Church in Falmouth. Federal tracking data have shown an increase in prescribed stimulants like ADHD meds, as well as in authorities' seizures of meth. Jesse Costa for NPR hide caption

Leslie had tried a weaker drug in the same class as meth a few years ago — Adderall, the medication for attention deficit hyperactivity disorder. He persuaded a doctor that he needed the pills to concentrate but says he just used them for a mild high and rush of energy while he was recovering from heroin and fentanyl. But Leslie's deception might be a window into an even bigger problem when it comes to stimulants.

Eadie, who tracks the country's prescription drug monitoring programs, says the data from the High Intensity Drug Trafficking Areas show an increase in prescribed stimulants like ADHD meds. They show that seizures of cocaine are rising too, though not as fast as meth. Combine the legal and illegal stimulants, with meth leading the way, and Eadie says it looks like there's an emerging stimulant epidemic, entwined with the opioid crisis.

"We're seeing almost as many people starting up methamphetamines and cocaine and prescription stimulants as are abusing the opioids," Eadie says. "So the problem is getting worse at the moment, and it's getting more complicated to deal with."

Half of the people who died after a meth overdose in 2017 also had an opioid in their system, according to an analysis that the Centers for Disease Control and Prevention released in May. That same report showed 73% of cocaine deaths included opioids. The CDC is stepping up prevention and surveillance efforts to get a better understanding of what's happening with stimulants. In September, it expects to begin collecting more local information about meth, cocaine and other stimulants, as it does now with opioids.

"We know that the relationship between stimulants and cocaine is a growing problem, and it requires an increase in public health and data collection efforts so that we can implement effective and comprehensive drug overdose prevention," says Mbabazi Kariisa, a health scientist at the National Center for Injury Prevention and Control at the CDC.

The complications are not news to Bradley Osgood, the chief of police in Concord, N.H., which has one of the highest opioid overdose death rates in the United States.

"Methamphetamine just presents a whole new issue for us," says Osgood, "and our officers are getting hurt. We've had concussions. We've had broken hands."

He says officers may need to run through traffic after someone who is high and leaping between cars. Sometimes most of the nine Concord officers on duty at any one time are needed to restrain one person thrashing about on meth. Concord police get crisis intervention training and know how to calm residents who have uncontrolled mental health issues, but Osgood says those same techniques don't seem to work with people high on meth.

Osgood says calls to reverse an opioid overdose have started to drop in Concord because more people have the opioid-reversal drug naloxone, brand name Narcan, and use it themselves. But meth is more than filling that gap.

"It's surpassed what we're seeing from heroin and fentanyl," Osgood says. "The rise in meth has just been unbelievable."

There is no drug like naloxone that police officers or family members can use to reverse an overdose from meth or other stimulant — a racing heart, dangerously high blood pressure and extreme sweats. Deaths involve a heart attack or stroke. 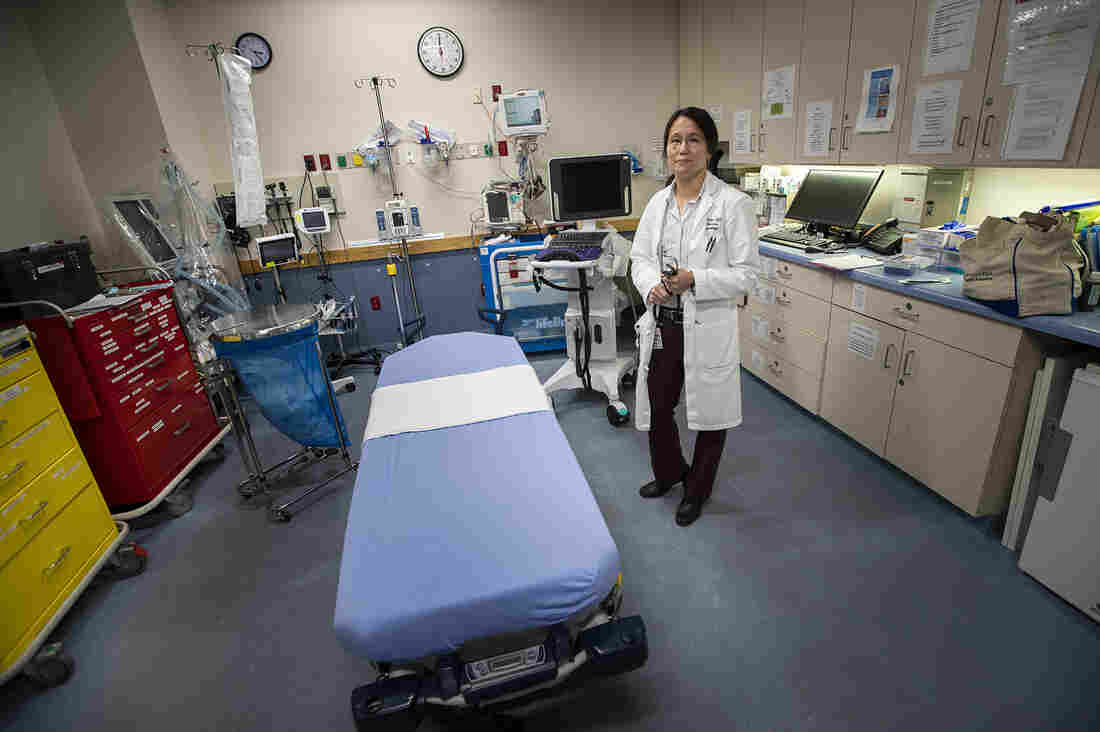 Dr. Melisa Lai-Becker, chief of emergency medicine, stands in one of the resuscitation rooms in the emergency ward at CHA Everett Hospital, near Boston. In the past 10 years, Lai-Becker says, she hardly saw any stimulant overdoses. These days, there are about four a week. Jesse Costa for NPR hide caption

Dr. Melisa Lai-Becker, who runs the emergency department at CHA Everett Hospital outside Boston, says she and her staff often get hurt, as Osgood's officers do, before they can inject a sedative, typically a benzodiazepine, to calm someone down. Figuring out how much of which benzo to give is an art, Lai-Becker says, because she doesn't know how much of what kind of stimulant the person took.

"You're looking at the speedometer, and you're trying to get them down from going 148 miles per hour down to 60 miles per hour," she says. "You want to get them to right around the speed limit, but you don't want to bring them all the way to a full stop."

In that case, doctors have to restart breathing and maybe the patient's heart. For the past 10 years, Lai-Becker says, she hardly saw any stimulant overdoses. These days, there are about four a week.

Meth's path into the U.S.

If a person is on meth, the U.S. Drug Enforcement Administration says it more than likely came into the U.S. from Mexico. Jon DeLena, associate special agent in charge for the New England Field Division, recently toured a crystal meth lab in a Mexican jungle that the Mexican military said was producing 7 tons every three days. 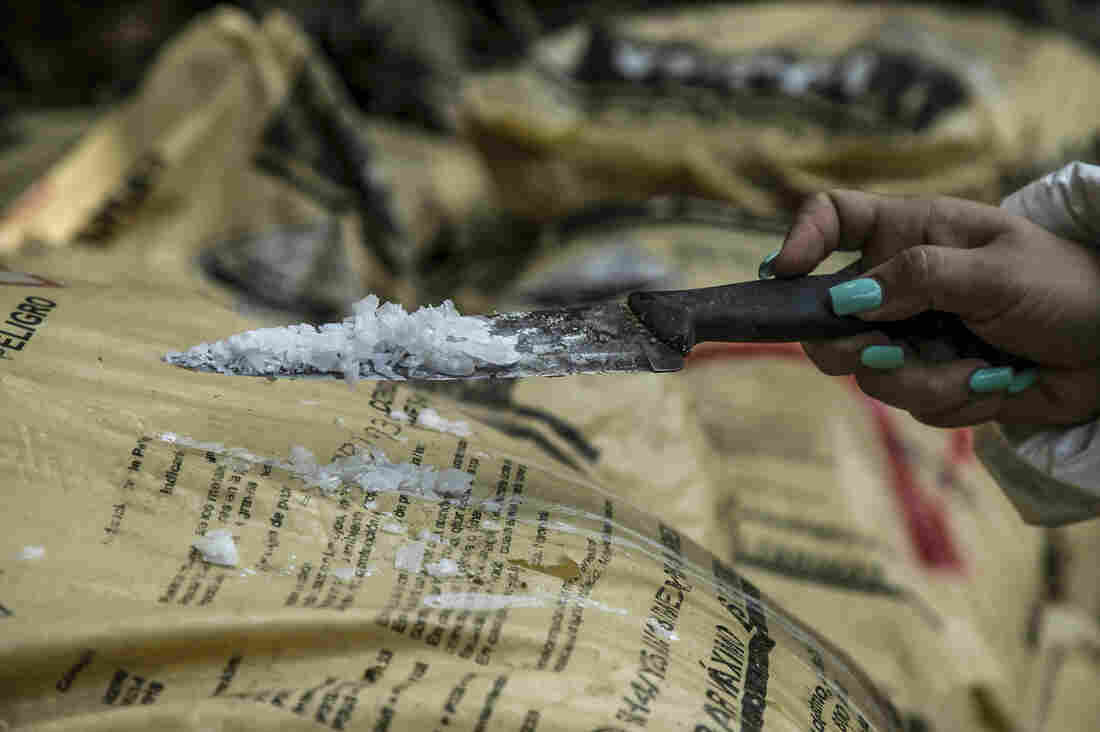 A Sinaloa state police officer works during the dismantling of one of three clandestine laboratories that were producing synthetic drugs, mainly methamphetamine, in Eldorado, Mexico. Rashide Frias/AFP/Getty Images hide caption

"It was enormous. It was incredible," DeLena says. "Those are the drugs that are coming into the United States and ultimately up into our region."

DeLena says the Mexican cartels put almost all U.S. domestic meth producers out of business several years ago with a cheaper, more potent version of the drug that travels into the U.S. through the same channels as fentanyl and cocaine. He says cartel leaders realized that drug users would want an alternative to fentanyl.

"They study the trends just like people here study the stock market," DeLena says. "They know what the next trend is going to be, and sometimes they force that trend upon people. And that's exactly what they're doing in this case."

Some doctors, researchers and recovery program leaders worry that growing attention to meth might slow the expansion of medication-assisted treatment and other efforts to reduce opioid overdose deaths.

Mike Leslie says he worries that other drug users aren't taking meth seriously because they don't think that it, like fentanyl, will kill them.

"Meth is extremely dangerous, but the chance of overdose is not as great as it is with opiates, so people, from my experience, have less of a desire to get clean from the meth," he says. 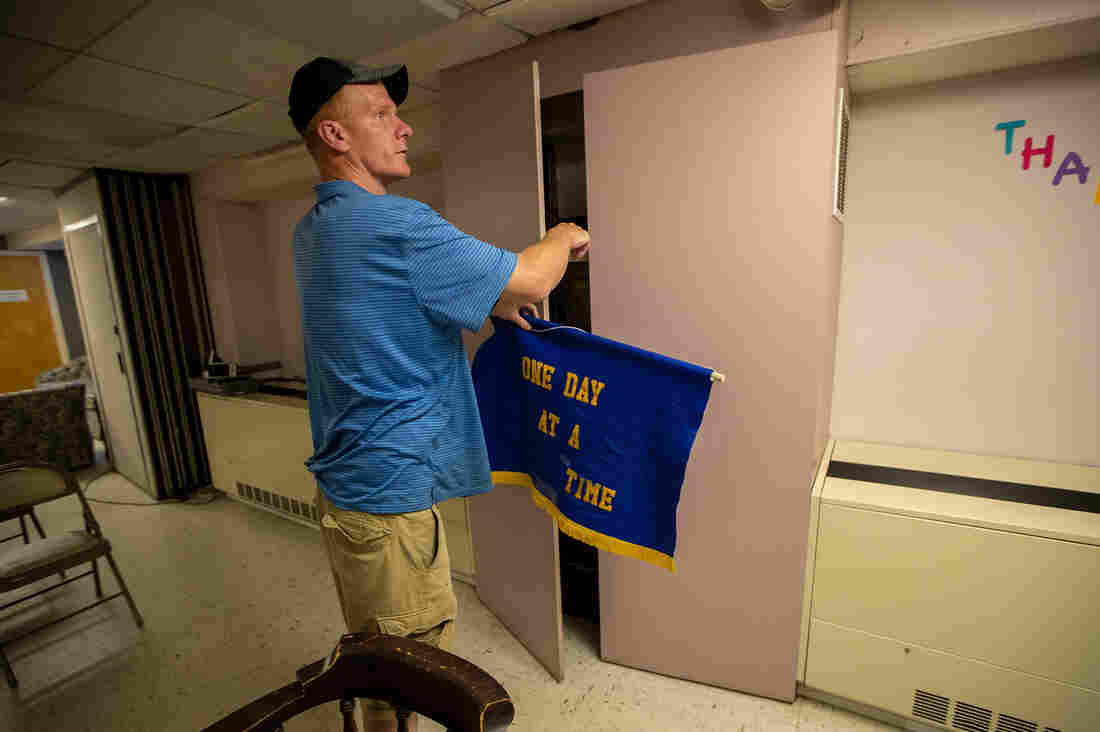 With the help of 12-step meetings, Leslie says, he has begun to reconnect with his family. But he worries that other meth and stimulant users don't take the risk of overdose seriously enough. Jesse Costa for NPR hide caption

Leslie says he's no longer using any drugs. And with the help of 12-step meetings, he's reconnecting with his family.

"I've put my family and my parents especially through hell and back," he says. Now, "the way my parents put it, for me to give them their son back is the best thing I could do."

But the rising drug-seizure numbers suggest there's more hell ahead for communities across the country facing a new or renewed wave of meth.