Accessibility links
Pain Relief For Very Sick Kids Is The Focus Of This Quick Response Team : Shots - Health News An interdisciplinary team in San Francisco uses acupressure, massage, counseling and other methods, as well as medicine, to help kids get relief from chronic pain. But such pediatric centers are rare. 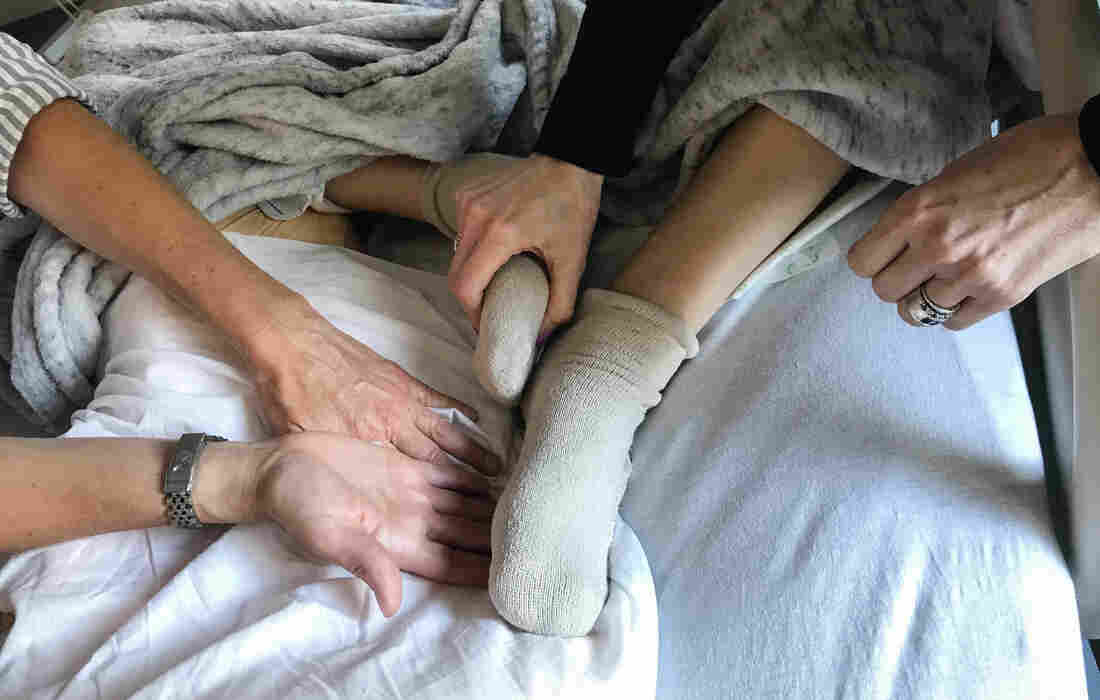 The Benioff Children's Hospital at the University of California, San Francisco is a sleek new building with state-of-the-art facilities — a place where the sickest children go for leading-edge treatments.

Which is why it might be surprising to find Robyn Adcock, who practices acupuncture and acupressure, walking the halls.

Though Adcock practices ancient arts of traditional Chinese medicine, she is an integral part of the hospital's integrative pediatric pain and palliative care — or IP3 — team. It's sort of an emergency response team for pain that combines traditional pharmaceutical pain care with other techniques to ease the suffering of the sick children who populate the rooms here.

The interdisciplinary team includes anesthesiologists and nurses, as you might expect. There's also a clinical psychologist, a massage therapist and someone who practices hypnosis — as well as Adcock, who treats patients with both acupuncture and acupressure.

"We see cases in the hospital that are end of life or very chronic serious illness, or extreme pain cases — where their primary team maybe wants more support and managing the pain piece," Adcock says. 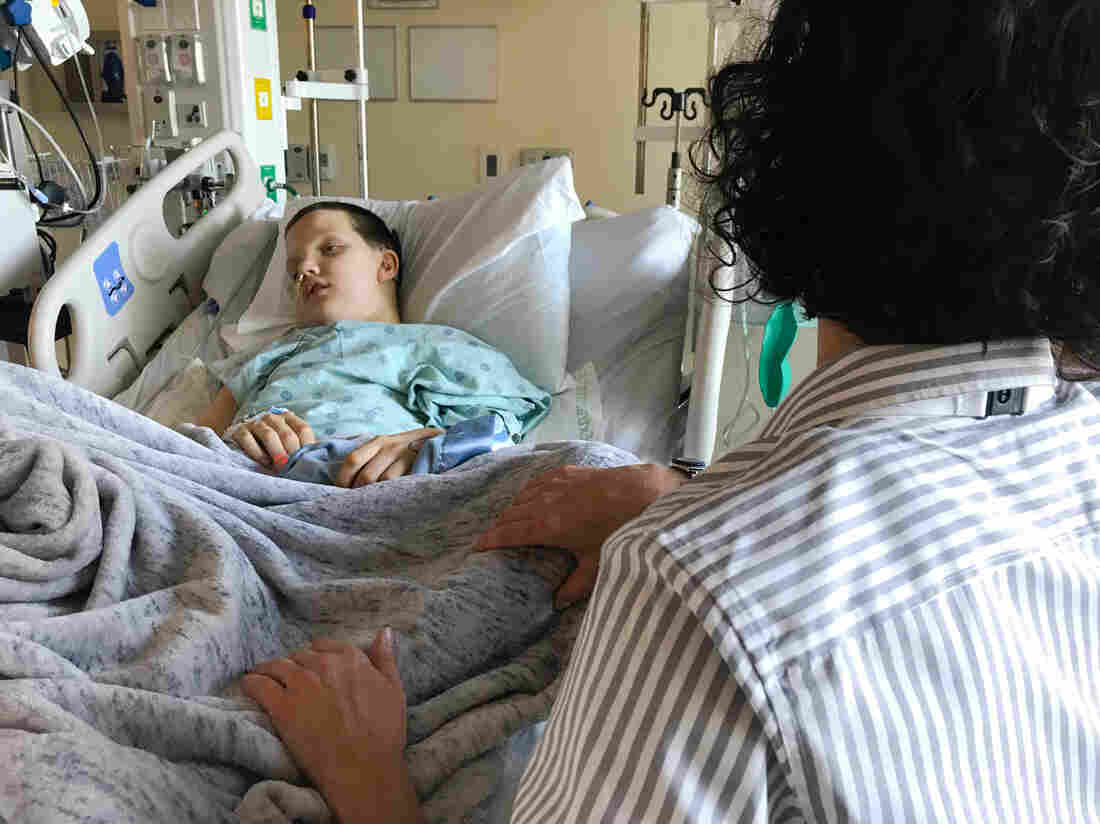 Adcock (right) softly touches 11-year-old Miller as she explains her pain relief plan to his parents. Miller has been heavily sedated because his rare neurological disorder periodically forces all his muscles to clench at once — a painful and life-threatening condition. Alison Kodjak/NPR hide caption

On the day I visit, she's headed to the intensive care unit to see an 11-year-old boy named Miller. He is suffering with a severe neurological disorder called deafness dystonia syndrome, an exceedingly rare genetic condition that impairs his hearing and causes his muscles to contract uncontrollably.

The condition hits children at puberty, and it hit Miller hard earlier this year.

Today, she says, her son is in a painful and life-threatening state known as status dystonicus — which means all of his muscles are contracting at once.

"So, in the last 48 hours we've seen a significant ramp up in his symptoms," Greenfield tells Adcock, as they stand over the bed where Miller is heavily sedated.

The medications her child is on are barely keeping his symptoms under control, Greenfield says, and he can't tolerate any more painkillers. She tells Adcock that the acupressure techniques Adcock taught them a few days earlier have been helpful.

"It's not that it stops it," Greenfield says, "but it gives us these periods in there of interruption where we have something to offer him in between all of this medication that he's getting."

Adcock says she's going to try some additional pressure points, and she leans over to greet the boy, who is almost unconscious.

"Hi, Miller," she whispers. "I'm going to feel your pulses, and then we're going to do some acupressure again today with you."

Adcock quietly reaches for Miller's wrists, then his legs and feet. She works silently for several minutes as Jessica and her husband, John Greenfield, look on, clutching paper coffee cups, their eyes clouded with sadness and exhaustion.

After working with Miller for about 15 minutes, Adcock beckons Jessica to the bedside to go over the pressure points they've already used and to show her some new points that she's marked with tiny radish seeds. 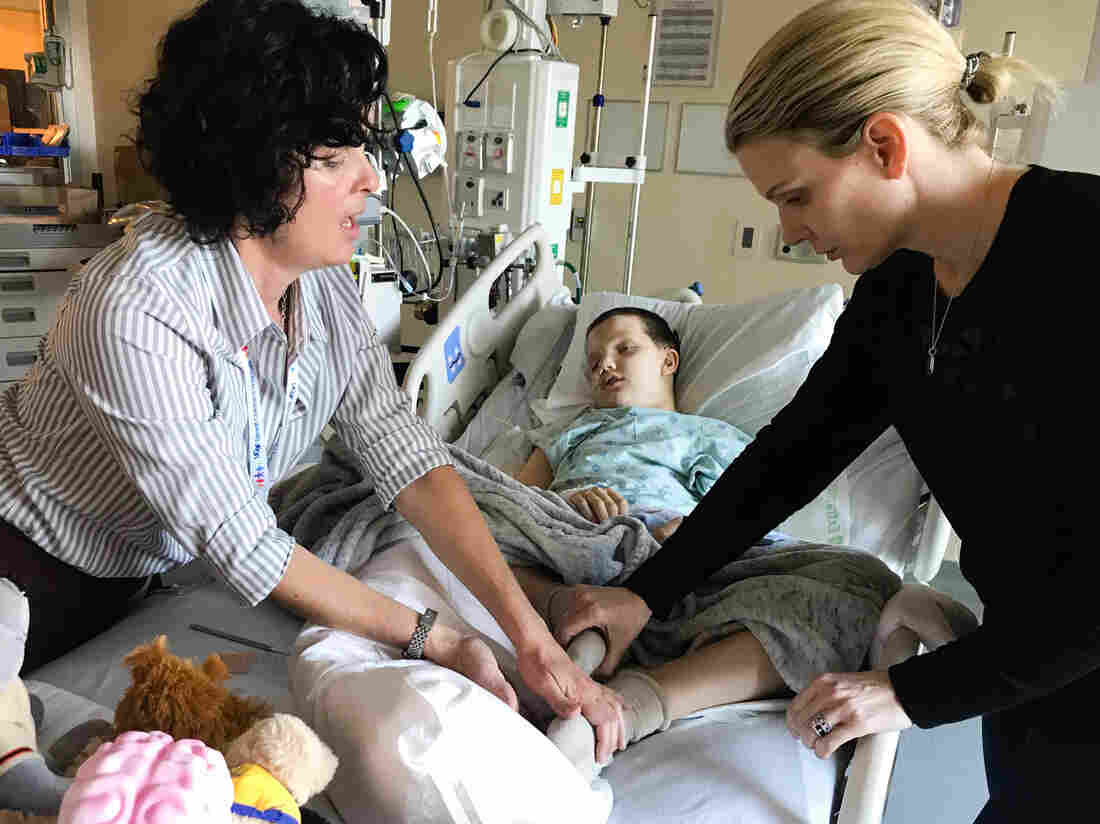 Miller's mom, Jessica Greenfield, says she knows the acupressure helps her son cope with his pain, because he requests it when his medication isn't enough. "It allows us a means of providing comfort for him," Greenfield says. Alison Kodjak/NPR hide caption

"So if you feel this side of the tibia ... your four fingers will help you" Adcock says, gently guiding Greenfield's hand. "You'll feel a soft, deeper spot. And you can let your intuition find it as well.

"If you're open and listening with your hands, you'll be able to find the point," she says quietly. "And you're on it. Perfect."

Jessica Greenfield says she knows the treatments help Miller, because he often asks her to touch his pressure points between Adcock's visits.

Studies estimate that 20% of children worldwide have chronic pain. That could range from frequent stomachaches to debilitating pain from cancer.

And the majority of those children will grow into adults who also are in chronic pain, says Christine Chambers, the Canada research chair in children's pain at the Centre for Pediatric Pain Research at Dalhousie University in Nova Scotia.

So, at a time when addiction to opioid painkillers is a crisis, finding alternative ways to manage pain and provide comfort is crucial, she says. Because not all pain can be taken away.

"Every clinician who works with a child in pain hopes that we will be able to take away all the pain," Chambers says. "That isn't always possible."

So this interdisciplinary approach, she says, helps kids manage their pain, ease it and live with it.

Research backs up many of the techniques, Chambers says, including physical therapy, hypnosis and even distraction.

"There's a super strong evidence base in favor of distraction," she says.

That's where art and music therapy come in, because these can take kids' minds off their pain.

Unfortunately, Chambers says, this type of pain care is rare, especially for children.

"Most children won't be able to access these," Chambers says. "There are specialized centers that offer these interdisciplinary treatment programs, but there are not nearly enough of them."

The team in San Francisco is one of only a handful across the U.S. And that's particularly unfortunate, she says, because most children who suffer chronic pain will bring that into adulthood.

Tackling pain from many sides is crucial because different techniques target different kinds of pain, says Stephen Wilson, the chief medical officer at UCSF Benioff who founded the IP3 team a decade ago and who has been building on it ever since.

Chemotherapy, for example, can cause many kinds of pain and discomfort in a child with cancer.

And then there's the fear and sadness, which Wilson calls "existential pain."

"It's not the kind of pain that responds to pain medication, but it's very real," he says. "They're suffering for sure."

Wilson says the team still relies on traditional painkillers, including opioids, to help the children. But, he says, acupuncture may be more effective against nausea than a medication. And a massage therapist can ease muscle aches; a psychologist can help with the existential fear; and art or music therapy can distract children from their pain.

Together these interventions can make the experience of illness less awful.

"A lot of times, just walking in the room, you can sense that the child and their family are doing better with a terrible situation," Wilson says. "The situation is still terrible, so I don't want to paint a rosy picture that somehow everything is wonderful, but it makes a huge difference."

Jessica Greenfield says the acupressure does just that for Miller and the whole family.