Accessibility links
Mass Shootings Can Be Contagious, Research Shows : Shots - Health News It may not be a coincidence that several mass shootings took place in one week. Research shows perpetrators are often inspired by media coverage of other shootings. 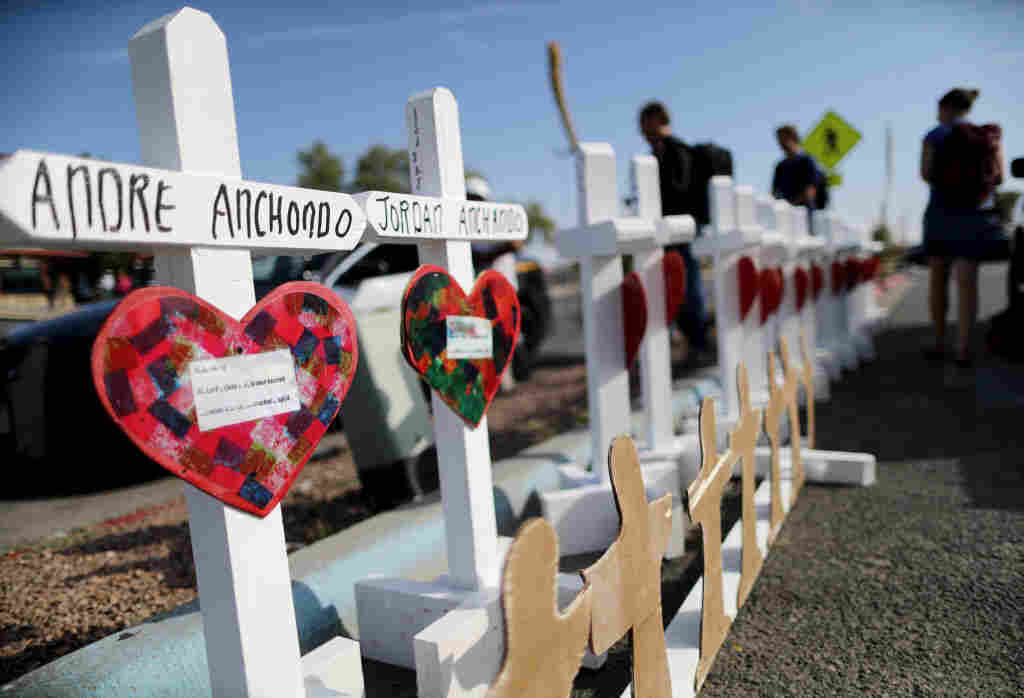 Crosses memorialize the victims of a mass shooting, which left at least 22 people dead, in El Paso, Texas. It was one of cluster of shootings that took place in roughly a week. Mario Tama/Getty Images hide caption 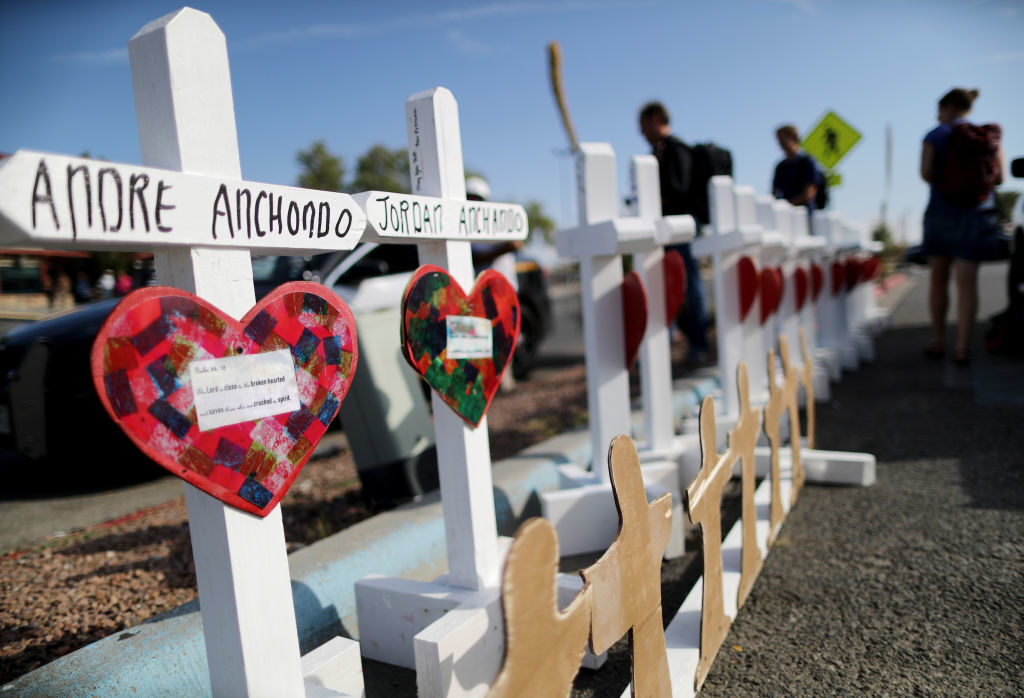 Crosses memorialize the victims of a mass shooting, which left at least 22 people dead, in El Paso, Texas. It was one of cluster of shootings that took place in roughly a week.

There were three high-profile shootings across the country in one week: The shooting in Gilroy, Calif., on July 28, and then the back-to-back shootings in El Paso, Texas, and Dayton, Ohio, this past weekend.

That's no surprise, say scientists who study mass shootings. Research shows that these incidents usually occur in clusters and tend to be contagious. Intensive media coverage seems to drive the contagion, the researchers say.

Back in 2014 and 2015, researchers at Arizona State University analyzed data on cases of mass violence. They included USA Today's data on mass killings (defined as four or more people killed using any means, including guns) from 2006 to 2013, data on school shootings between 1998 and 2013, and mass shootings (defined as incidents in which three people were shot, not necessarily killed) between 2005 and 2013 collected by the Brady Campaign to Prevent Gun Violence.

The lead researcher, Sherry Towers, a faculty research associate at Arizona State University, had spent most of her career modeling the spread of infectious diseases — like Ebola, influenza and sexually transmitted diseases. She wanted to know whether cases of mass violence spread contagiously, like in a disease outbreak.

So, she plugged each data set into a mathematical model.

In other words, school shootings and other shootings with four or more deaths spread like a contagion — each shooting tends to spark more shootings.

"So one happens and you see another few happen right after that," says Jillian Peterson, a criminologist at Hamline University in Minnesota and founder of the nonpartisan think tank, The Violence Project. She wasn't involved in the Arizona State research but has found similar patterns in her own research.

Towers and her colleagues also found that what set apart shootings that were contagious was the amount of media coverage they received. "In the incidences where there were four or more people killed, and even school shootings, those tended to get national and even international media attention," says Towers.

She also found that there is a window when a shooting is most likely to lead to more incidents — about two weeks. Towers and her team published their results in 2015.

It's a form of social contagion, says Peterson, somewhat like a suicide contagion — that's when a high-profile suicide leads to more people to take their own lives. For example, following the suicide of actor Robin Williams, researchers documented a 10% spike in suicides in the months following his death. Vulnerable individuals who are already struggling with suicidal thoughts read or watched news reports of the actor's death and then took their own lives.

Peterson has interviewed living mass shooters in prison and people who knew such perpetrators and has found that these individuals often start out feeling suicidal.

"We can show about 80 percent were actively suicidal prior to the shooting," she says.

Now, the vast majority of people who are suicidal don't attack others. And people with any kind of mental health problems aren't more likely to be violent than others. In fact, they are more likely to be victims of violence than those without mental illness.

But Peterson says that in very rare cases, a tiny minority of people considering suicide go down the path of violence toward others. She has come to think of mass shootings as a form of suicide. "They're angry, horrible suicides that take a lot of people with them," she says. "The shooter never intends to live; there's never a getaway plan. Typically they tend to think of this [as] their kind of last moment."

Other researchers have documented the same in studies of active shooters.

"About half of the school shooters I've studied died by suicide in their attack," Peter Langman, a clinical psychologist in Allentown, Pa., told NPR earlier this year. "It's often a mix of severe depression and anguish and desperation driving them to end their own lives."

Vulnerable individuals who are also angry and already considering violence may read or watch the news of a mass shooting and identify with the shooter and be inspired by them.

"So a mass shooting happens and then vulnerable individuals who are actively suicidal and in crisis and hear about the shooting and see this as kind of a script that they could also follow," she says.

"There is this element of wanting notoriety in death that you don't have in life," Peterson says. "So when one happens and it makes headlines and the names and pictures are everywhere and the whole world is talking about it, that becomes something that other people see as a possibility for themselves."

Now it's hard to know yet whether the shooter in Dayton, Ohio, was consciously influenced by the shooter in El Paso, the one in Gilroy, Calif., or another shooting.

But Sherry Towers notes that there's clear evidence that the shooter in El Paso, Texas, was inspired by the shooting at a mosque in New Zealand back in March.

"It's in his manifesto that he published online," says Towers. "He mentions that he wanted to emulate the Christchurch, New Zealand, shooting."

Peterson and other researchers who study mass shootings think the media should avoid showing the shooters' images and dwelling on their life histories and motives. "The fact that we give them that notoriety is problematic," says Peterson.