Accessibility links
Cave Photographer Dives Deep 'Into The Planet' To Explore The Unexplored : Shots - Health News "The big picture of survival is sometimes so hard to see, but we always know what we can do to make the next best step toward survival," says cave diver, photographer and memoirist Jill Heinerth. 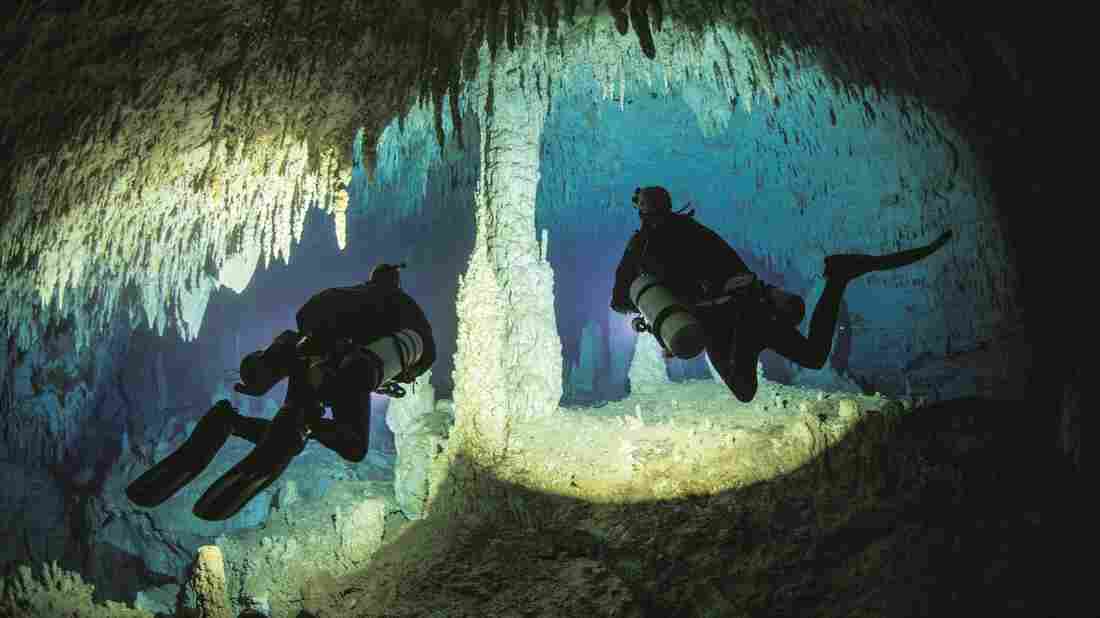 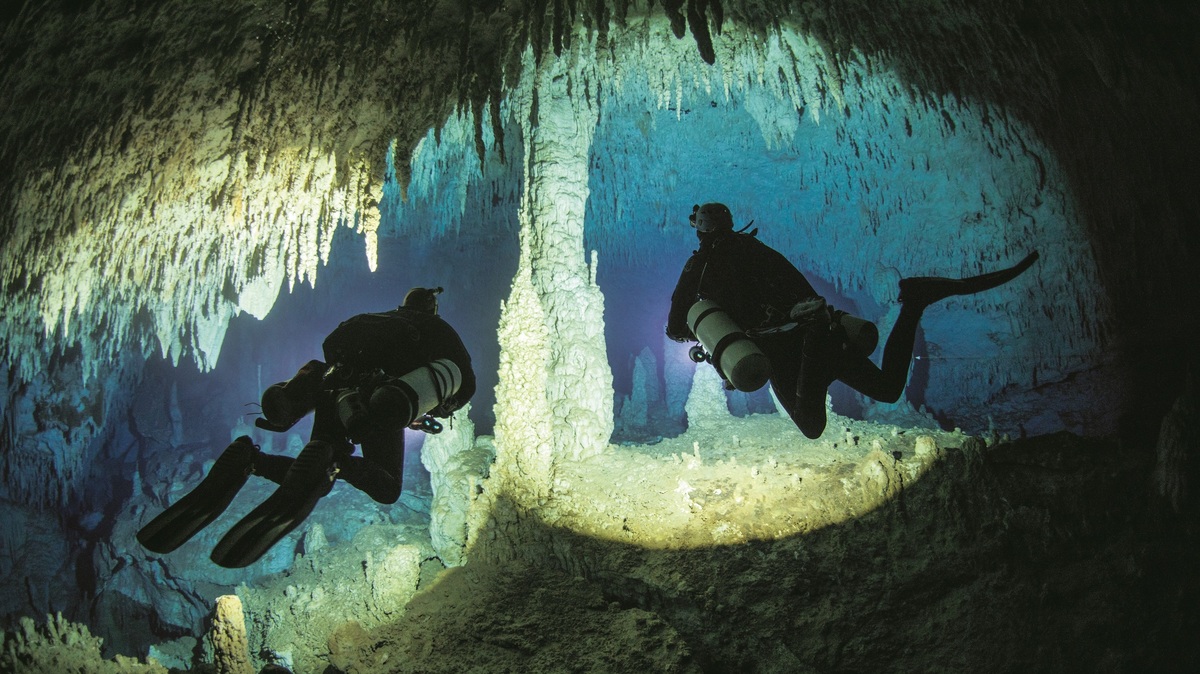 Diver and photographer Jill Heinerth has explored unmapped, underwater caves deep in the earth, as well as the submerged crevices of an iceberg. She has seen hidden creatures and life forms that have never been exposed to the light of day.

"Since I was the smallest child, I always wanted to be an explorer — to have an opportunity to go someplace where nobody has ever been before," she says. "As an artist with my camera, it's an incredible opportunity to document these places and bring back images to share with others."

Heinerth writes about her explorations, some harrowing escapes, and the challenges she has faced as a woman in the cave diving community in a new memoir, Into the Planet. She notes that cave diving is so risky that divers are often unable to buy life insurance; she estimates she has lost more than 100 friends and colleagues to underwater caves and technical diving.

When something terrible happens, it's really easy for your mind to just explode into these, like, chattering monkeys. ... I take a really deep breath and try and slow my heart, slow my breathing.

Before every dive, Heinerth goes through extensive safety checks on all of her gear. Then she sits down, closes her eyes and imagines all the horrible things that could happen.

"I actually think about what would kill me today," she says. "But I envision myself solving each one of those [problems], and sometimes I'm actually, like, moving my hands and reaching for a valve or a button or whatever to solve each of those issues, so that when I get in the water my mind is really free."

Heinerth is also a writer, photographer and filmmaker who has starred in TV series for PBS, National Geographic Channel and the BBC. 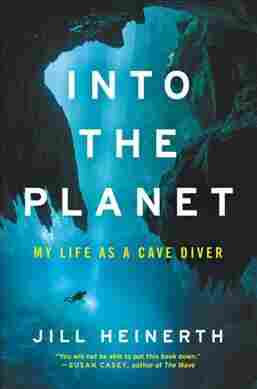 My Life As a Cave Diver

On diving inside an iceberg in Antarctica

In the ocean you have significant tidal exchanges, but there are a lot of things that are happening around an iceberg. As it's melting, you get freshwater dropping into saltwater, and that actually also creates really weird up currents and down currents. So there are a lot of environmental factors at play — none of which we could have predicted, because nobody had written a handbook for something that hadn't been done before. ...

Nobody had had ever attempted to cave dive inside an iceberg. And this iceberg was not just the largest moving object on the planet, but it was the size of Jamaica. So when this broke away from the Ross Ice Shelf in Antarctica and started to make its journey north, it started breaking into pieces along fractures and crevasses that we were able to exploit and swim inside of, to find tunnels within the ice and tunnels beneath the iceberg where it had sort of tripped up on the seafloor.

We were diving beneath this iceberg and we were well into these passages when I was hearing cracks and pops and groans and all sorts of sound from the ice, and in the moment I didn't realize what it was. But when we turned around to retrace our footsteps and come back out, we got to a point where we could swim toward the surface, toward daylight, and I realized that the doorway — the very opening that we had gone into to get into the iceberg — had closed. There'd been a calving, and a massive piece of ice had blocked the doorway out. ... 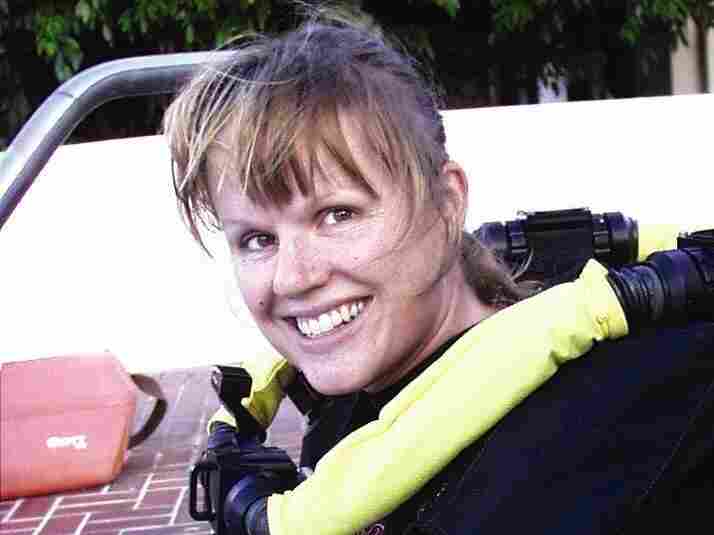 "Nobody had had ever attempted to cave dive inside an iceberg," Heinerth says of her expedition in Antarctica. Jill Heinerth/Ecco hide caption 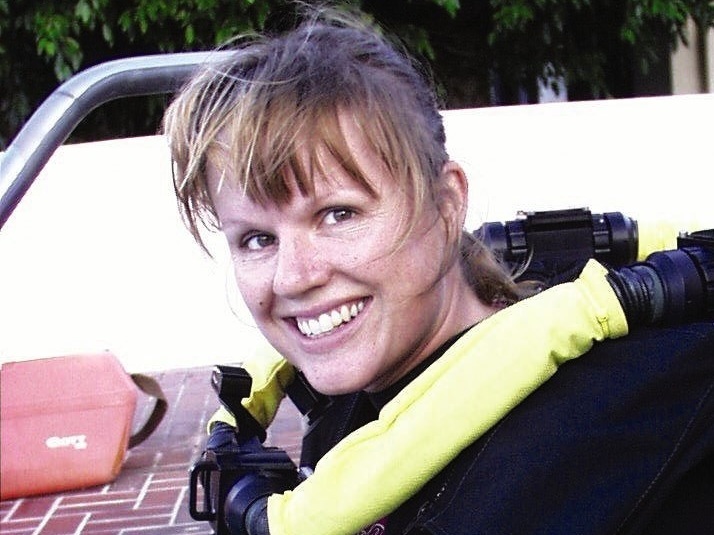 "Nobody had had ever attempted to cave dive inside an iceberg," Heinerth says of her expedition in Antarctica.

We worked our way around, in between blocks of ice, and found a new route back to the surface. And I remember sitting there, about 20 feet below the surface, just doing a hang for what we called decompression time at the end of the dive, just to allow my body to re-acclimate to the pressure. And I looked up and I could see my colleagues on a zodiac boat waiting for us, and they were like high-fiving and dancing, and apparently it was much more dramatic from their viewpoint than from mine. When that piece of ice calved and blocked the doorway, it nearly threw them out of the boat and they were sitting up there assuming that we were dead. ...

And as we sat there eating our meal [later on the boat], suddenly I heard a scream on deck and we went running up ... onto the deck to see the very iceberg we had just been inside of cracking and dissolving and breaking up into just slush ice on the surface of the ocean as far as the eye could see. So the cave we had just been inside was now gone. ... If we'd been in there, we would have been killed. There's no doubt.

When something terrible happens, it's really easy for your mind to just explode into these, like, chattering monkeys. It's like your emotions want to take over. You start to breathe fast, your heartbeat starts to race, and you have to turn that all off. So I take a really deep breath and try and slow my heart, slow my breathing and then just focus on pragmatic small steps. Like, the big picture of survival is sometimes so hard to see, but we always know what we can do to make the next best step towards survival. So it's really all about controlling emotions and controlling your breathing.

On the unusual creatures she has encountered in underwater caves

Polar Photographer Shares His View Of A Ferocious But Fragile Ecosystem

Caves are filled with remarkable life forms that we barely understand. We're barely even beginning to document these new species. There were animals living inside the earth that don't live by photosynthesis, and many of these animals have no eyes, no pigment, but they have remarkable sensory capabilities. And all of these animals, with these unique characteristics, may be able to teach us an awful lot about evolution, about survival, maybe even about new chemical and drug compounds that are of use to humanity.

On the importance of being scared

People usually laugh when I tell them that I'm actually risk-averse. I'm not fearless. I think that it's important to be scared. When you approach anything new — and for me that's often — I certainly get that fear in the pit of my stomach. But the problem-solving to do something new that's never been done before allows me to plan through all the potential risks. And then when I get in the water, I'm actually sort of free in my mind and totally focused on what's ahead. But I don't want to go diving with people that are fearless. I want to go diving with people that are scared, because to me that tells me that they care about the outcome, and that they're not going to be foolish if we encounter something underwater.

On one near-death experience she had diving

There have been a few times where I wasn't sure I was going to make it home. There was one dive where I was even dead for 73 minutes to my friends — because my diving partner made it out of the cave and sort of sounded the alarm and literally started that phone tree to bring in the [body] recovery divers. ... Meanwhile, I'm still in the cave searching for my diving partner, because I didn't want to leave the cave if she was still there. So I had retreated all the way into the maximum penetration in this cave, and was slowly working my way out on a methodical search to make sure I wasn't leaving her behind.

Photographer Builds A 'Photo Ark' For 6,500 Animal Species And Counting

I remember the thoughts that were going through my head, "Oh my God, two women can't die in a cave! That'll be, like, world news." And I even remember thinking crazy things like, "I gotta get out of here! My husband doesn't know how to do the taxes!" So that whole time, as people were rushing to the scene, they figured I was dead. After that experience, they sent me letters and emails — things that they would have read at my funeral and things that would have been my eulogy — and that was pretty sobering.

Roberta Shorrock and Seth Kelley produced and edited the audio of this interview. Bridget Bentz, Molly Seavy-Nesper and Deborah Franklin adapted it for the Web.