Accessibility links
What Can Naked Mole Rats Teach Researchers About Longevity And Resilience? : Shots - Health News Picture a hairless, wrinkly rodent about the size of a small sweet potato — kinda cool, kinda weird. They also are extraordinarily long-lived. Researchers are lining up to study their secrets. 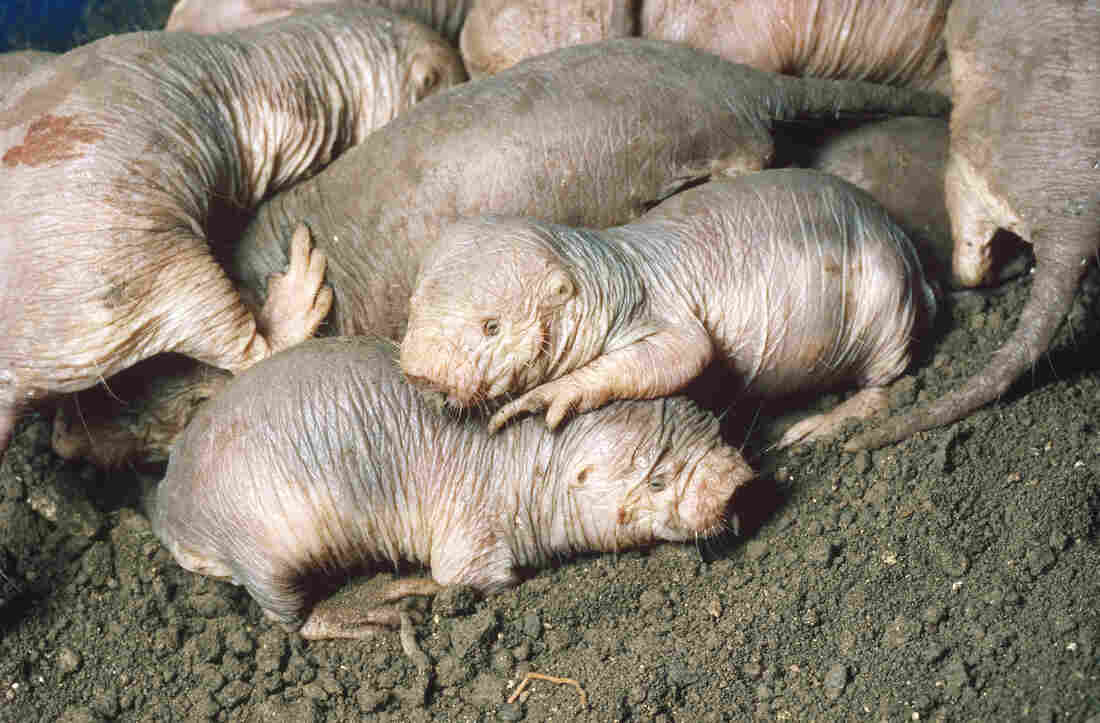 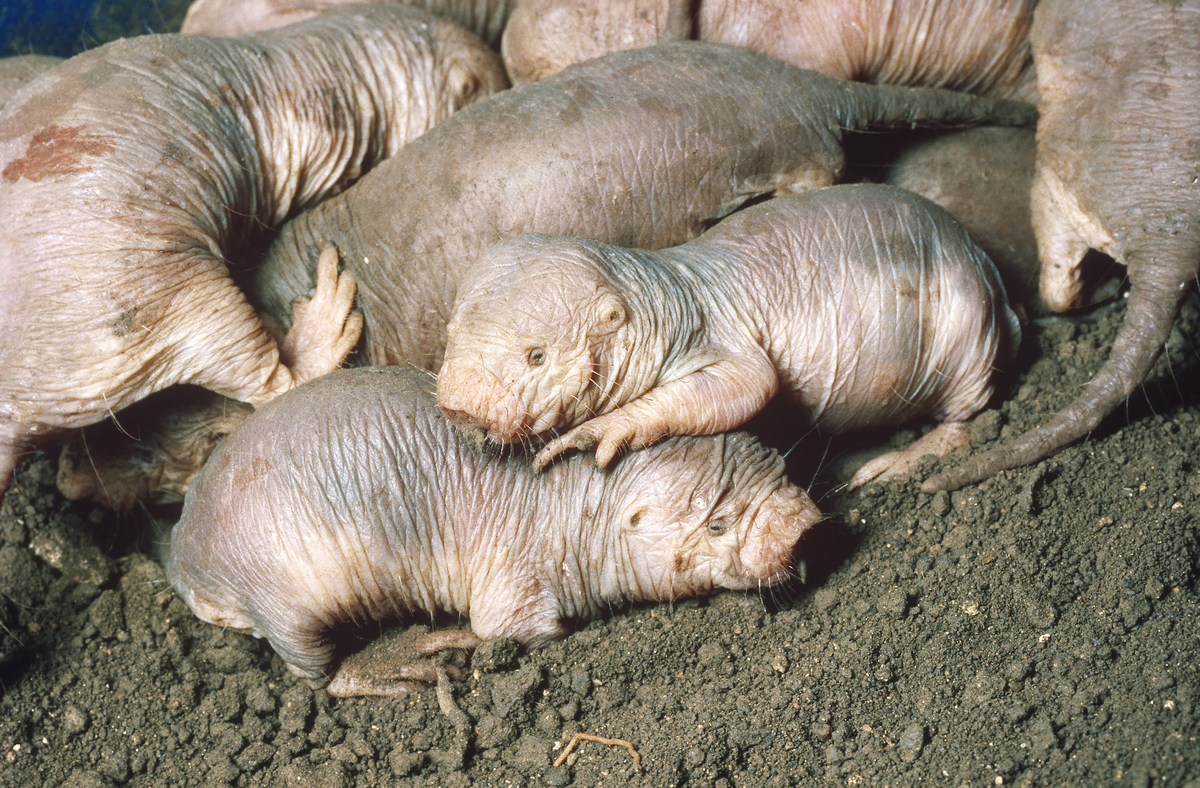 Naked mole rats are eusocial, which means they live all crowded together, in a colony underground.

Naked mole rats don't look like they'd be one of nature's superstars. They're about the size and shape of small sweet potatoes. These rodents are native to the grasslands of East Africa, and are mostly hairless, wrinkled, and blind. And yet, they've evolved some special behaviors and features that help them thrive in harsh environments in which other mammals (humans included) would wither.

Kenton Kerns, assistant curator of small mammals at The Smithsonian's National Zoo in Washington, DC, says visitors often scurry past their naked mole rat exhibit in disgust. "I always feel like, 'No, come back! Let us tell you what you're running away from,' " he says.

When they were new to science, in the 1970's, researchers studied them for their unusual behavior and social structure. In the past two decades or so, scientists have been looking into their super survival traits — long life spans and apparent lack of aging — for lessons on how humans can stay healthy and live longer.

And for some of us — they're just one of nature's most delightful, weird wonders. Here's a primer on what makes them so amazing:

They're eusocial, which means they live all crowded together underground, in a colony, like bees or ants, with a queen who has babies and a bunch of workers who do everything else — tend to the nursery, dig out new tunnels, find new tubers to eat, and guard the den. 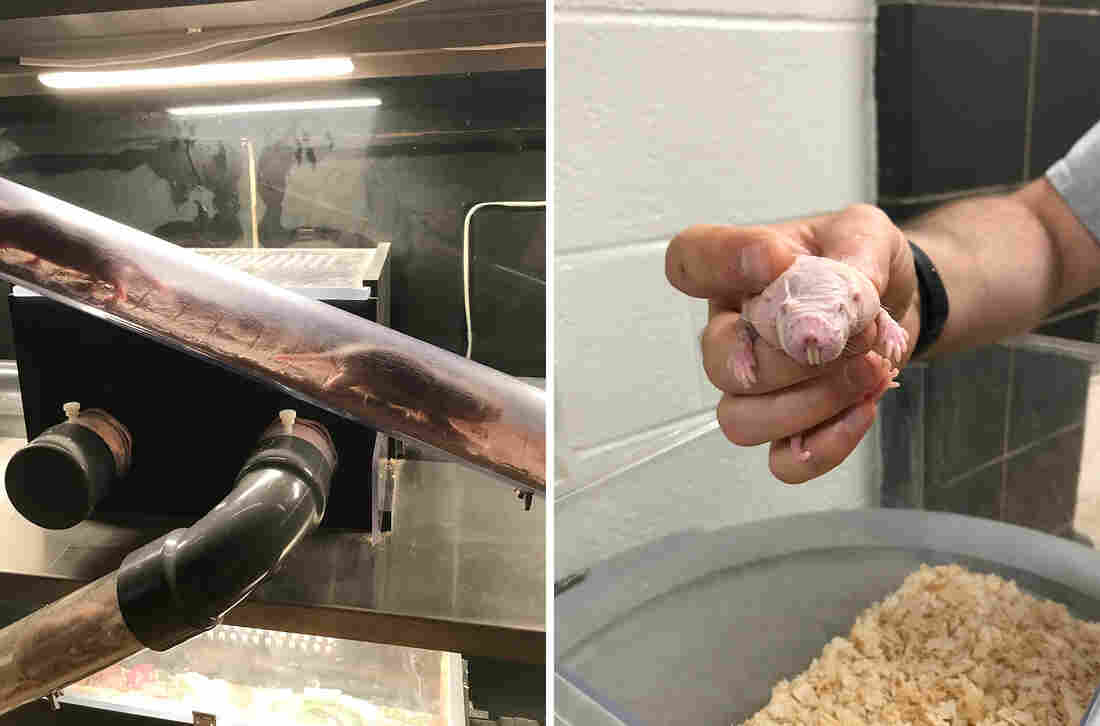 Naked mole rats walk over each other in a tunnel in an exhibit at Smithsonian's National Zoo in Washington, D.C. (left). Kenton Kerns, assistant curator at the Small Mammal House, holds a naked mole rat (right). Pien Huang/NPR hide caption

"If you think about being the size of a cocktail hot dog, and everyone out there on the African plains wants a snack, it's not an easy life," says Stan Braude, a biologist at Washington University in St. Louis who studies naked mole rats in the wild. Living in groups, he says, allows them to divide up the labor of staying safe, finding enough food, and birthing and raising baby mole rats.

Does your skin hang low? Yes, if you're a naked mole rat.

Naked mole rats have physical traits that seem uniquely suited to their environments.

Their skin hangs wrinkly and loose on their bodies — it snags like a sweater, but doesn't tear, on pebbles and other hindrances in their underground tunnels.

It's consistently hot and humid in those tunnels — generally about 90 degrees F, with up to 70% humidity. Naked mole rats are cold-blooded, which saves them the trouble (and energy) of thermoregulating.

A quarter of their muscle mass resides in their jaws, and their lips close behind their teeth, so they don't get mouthfuls of soil while digging. They use their two front teeth to burrow underground in the East African grasslands, through hard-packed dirt. They have even been known to chew through concrete with their teeth-shovels. 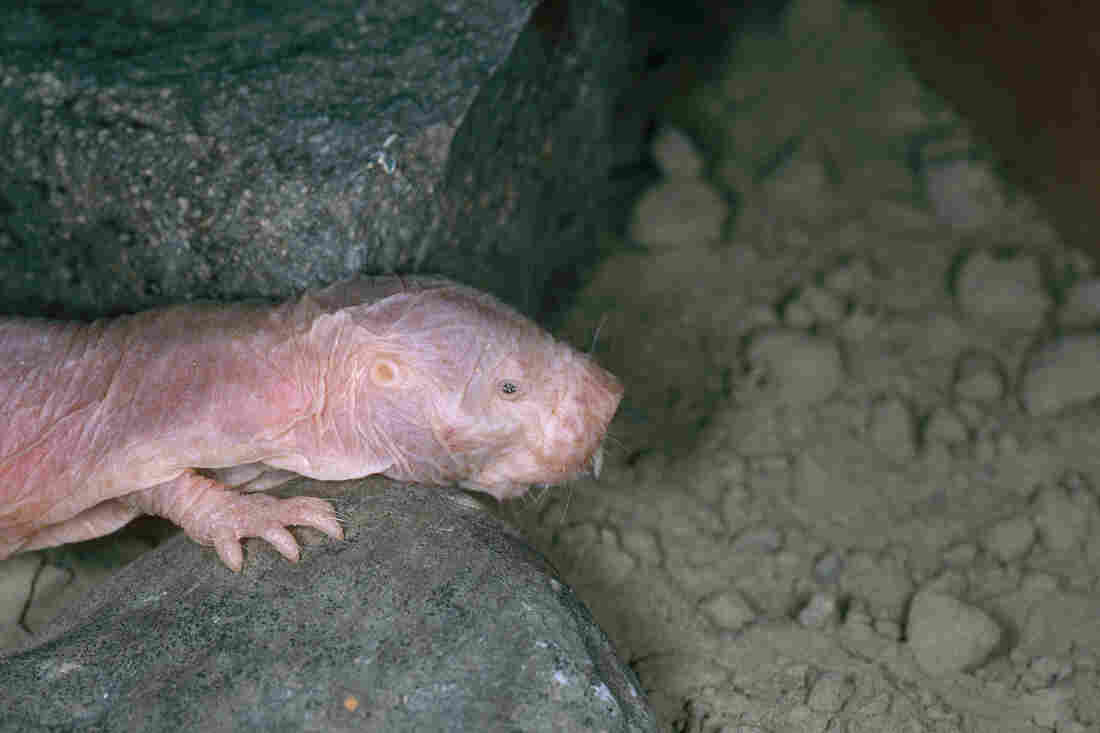 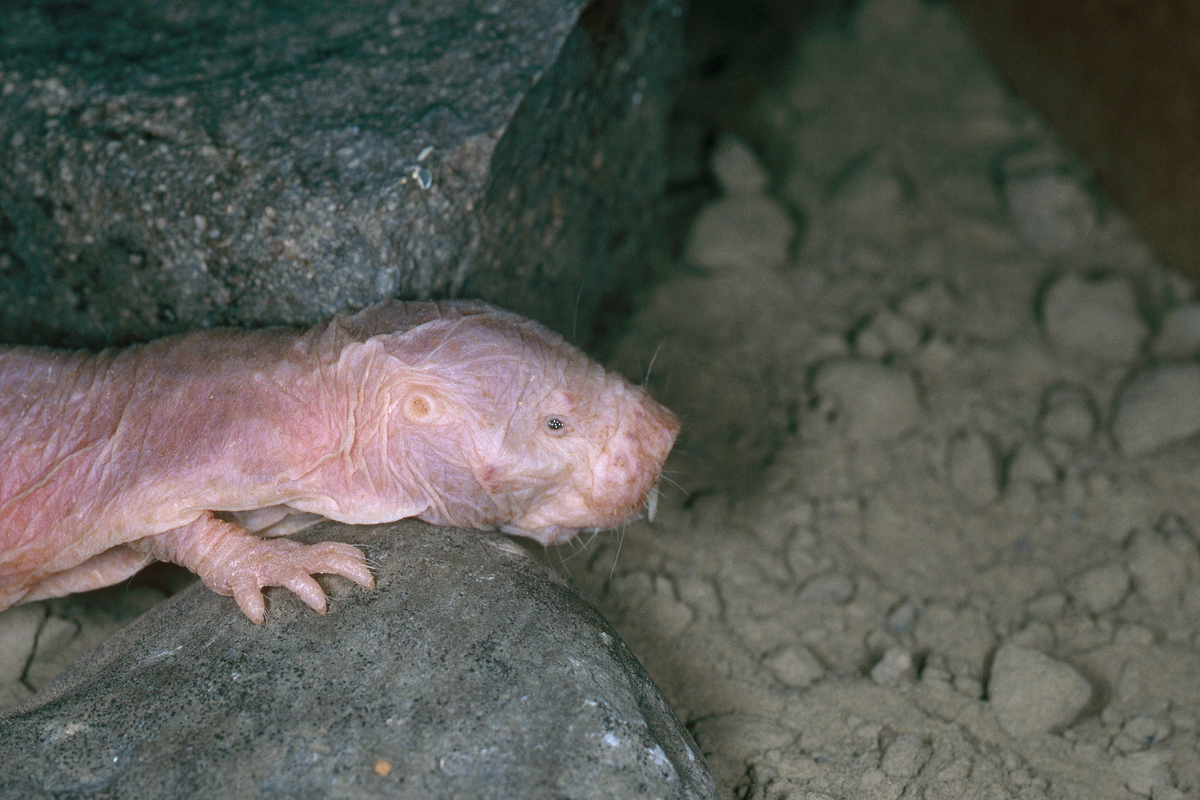 The wrinkly-skinned colony dwellers may be the longest-living rodents.

They're icons of resilience.

They don't drink water, and can survive up to 18 minutes without oxygen with no apparent brain damage. They don't feel pain from injury and inflammation.

"It just seems like now, they do everything," says Eileen Lacey, biology professor and curator of mammals at the University of California, Berkeley.

Researchers are studying the biology and physiology of naked mole rats, in hopes of finding new treatments that could help humans lessen pain, prevent cancer, and live longer.

Or it seems like that, to other rodents. Naked mole rats are the longest-living rodents we know of. While mice and rats live for a maximum of four to five years, some naked mole rats are over 30 years old and going strong.

They also don't seem to exhibit the typical mammalian signs of aging. The queen can have babies throughout her life. And while they do slow down as they get older, they appear to be resistant to aging-related diseases like cancer and Alzheimer's (Scientists caution that we haven't been studying them long enough to know the natural end to their lifespan).

Day and night? It's all the same.

The National Zoo and the Pacific Science Center have live 24-hour feeds of their naked mole rat exhibits. They're active around the clock, so you can catch them eating, napping, doing their business, moving piles of shavings, and generally hanging out anytime.

They're here for you, when you're ready to give them a second look.

Pien Huang is NPR's Reflect America Fellow. She fell in love with naked mole rats on first sight at the Pacific Science Center in Seattle.