Accessibility links
Academia Uneasy With Lack Of Diversity On 'Dude Walls' Honor' : Shots - Health News Historic portraits of revered scientists and doctors can be found all over medical schools and universities — and, as it happens, most feature white men. Some say this sends the wrong message. 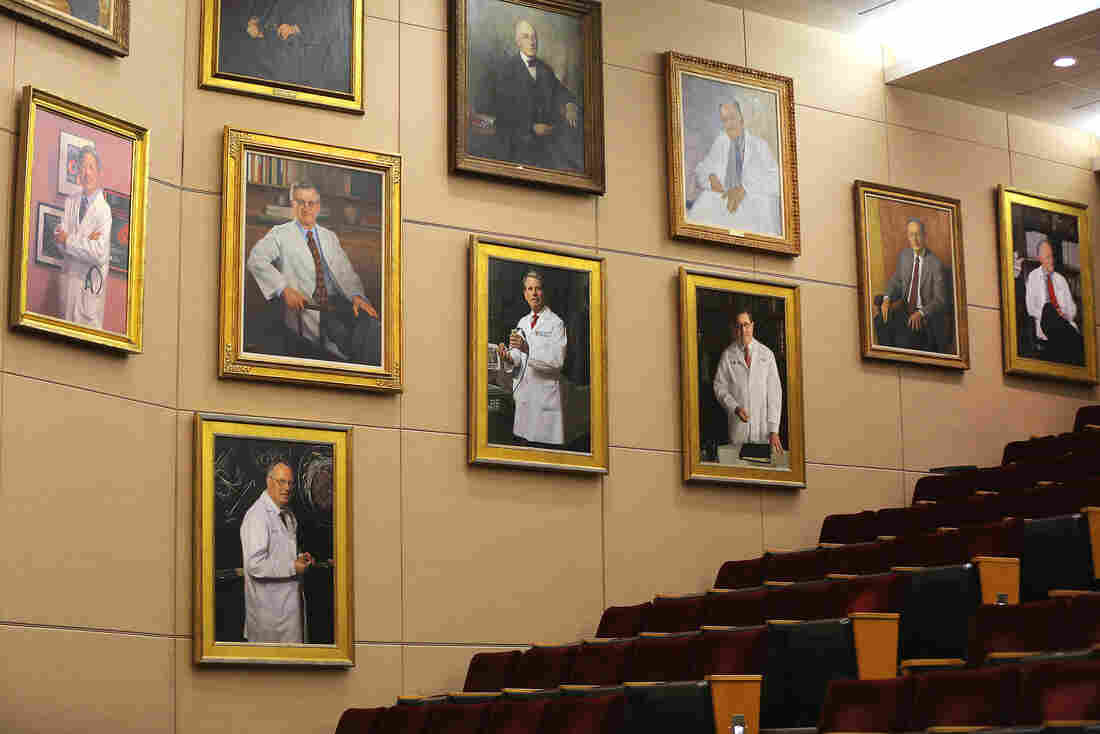 All the portraits hanging on the wall inside the Louis Bornstein Family Amphitheater at Brigham and Women's Hospital in Boston on June 12, 2018 were of men, nearly all white. The portraits have since been removed. Pat Greenhouse/Boston Globe via Getty Images hide caption 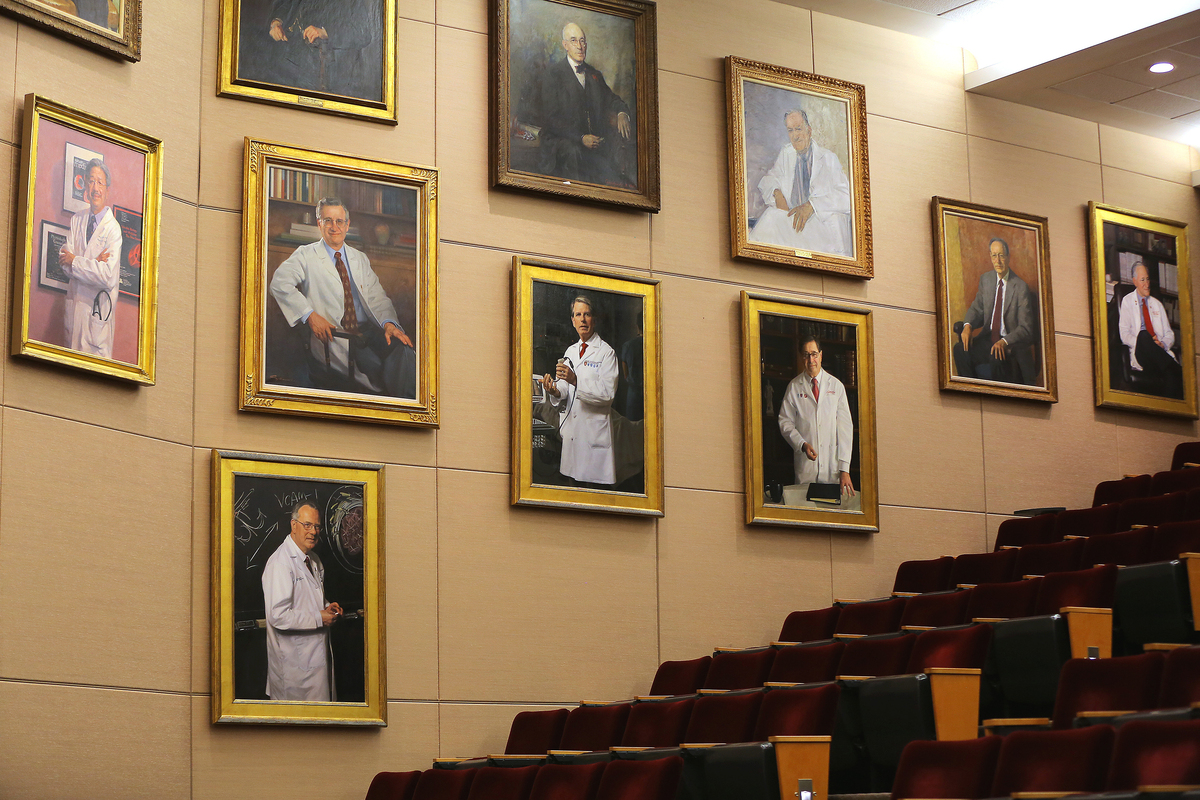 All the portraits hanging on the wall inside the Louis Bornstein Family Amphitheater at Brigham and Women's Hospital in Boston on June 12, 2018 were of men, nearly all white. The portraits have since been removed.

A few years ago, TV celebrity Rachel Maddow was at Rockefeller University to hand out a prize that's given each year to a prominent female scientist. As Maddow entered the auditorium, someone overheard her say, "What is up with the dude wall?"

She was referring to a wall covered with portraits of scientists from the university who have won either a Nobel Prize or the Lasker Award, a major medical prize.

"One hundred percent of them are men. It's probably 30 headshots of 30 men. So it's imposing," says Leslie Vosshall, a neurobiologist with the university and the Howard Hughes Medical Institute.

"I think every institution needs to go out into the hallway and ask, 'What kind of message are we sending?' "

Vosshall says Maddow's remark, and the word "dude wall," crystallized something that had been bothering her for years. As she travels around the country to give lectures and attend conferences at scientific institutions, she constantly encounters lobbies, conference rooms, passageways, and lecture halls that are decorated with portraits of white men.

"It just sends the message, every day when you walk by it, that science consists of old white men," says Vosshall. "I think every institution needs to go out into the hallway and ask, 'What kind of message are we sending with these oil portraits and dusty old photographs?'"

She's now on a committee that's redesigning that wall of portraits at Rockefeller University, to add more diversity. And this is hardly the only science or medical institution that's reckoning with its dude wall.

At Yale School of Medicine, for example, one main building's hallways feature 55 portraits: three women and 52 men. They're all white.

"I don't necessarily always have a reaction. But then there are times when you're having a really bad day — someone says something racist to you, or you're struggling with feeling like you belong in the space — and then you see all those photos and it kind of reinforces whatever you might have been feeling at the time," says Max Jordan Nguemeni Tiako, a medical student at Yale.

He grew up reading Harry Potter books, and in that fictional world, portraits can talk to the characters. "If this was Harry Potter," he muses, "if they could speak, what would they even say to me? Everywhere you study, there's a big portrait somewhere of someone kind of staring you down."

Yale medical student Nientara Anderson recently teamed up with fellow student Elizabeth Fitzsousa and associate professor Dr. Anna Reisman to study the effect of this artwork; the results were published in July in the Journal of General Internal Medicine.

"Students felt like these portraits were not just ancient, historic things that had nothing to do with their contemporary experience," says Anderson. "They actually felt that the portraits reinforced contemporary issues of exclusion, of racial discrimination — of othering."

Yale has recently been commissioning new portraits, including one of Carolyn Slayman, a geneticist and member of the Yale faculty for nearly 50 years, as well as one of Dr. Beatrix Hamburg, a pioneering developmental psychiatrist and the first black female Yale medical school graduate. And there's an ongoing discussion at Yale about what to do with all those old portraits lining the hallways.

One option is to move them someplace else. That was the approach taken at the department of Molecular & Integrative Physiology at the University of Michigan. Ally Cara, a Ph.D. student there, says its seminar room "featured portraits of our past department chairs, which happened to be all male."

"When you're having a really bad day — someone says something racist to you, or you're struggling with feeling like you belong in the space — and then you see all those photos."

The 10 or so photographs were lined up in a row. "When our interim chair, Dr. Santiago Schnell began his service a couple years ago, he wanted to bring a more modern update to our seminar room," Cara says, "including bringing down the dude wall and relocating it."

The photos are now in a less noticeable spot: the department chair's office suite. And the seminar room will soon be decorated with artwork depicting key discoveries made by the department's faculty, students, and trainees.

"We really want to emphasize that we're not trying to erase our history," says Cara. "We're proud of the people who have brought us to where we are today as a department. But we also want to show that we have a diverse and inclusive department."

Changes like this can be a sensitive subject. At Brigham and Women's Hospital in Boston, one of Harvard's teaching hospitals, there's an auditorium that for decades was covered with large portraits of 31 men.

"It made an impression," says Dr. Jeffrey Flier of Harvard Medical School, who first saw the wall of portraits back in the 1970's. But recently, he walked in the auditorium and "was taken aback because, instead of this room filled with portraits of historically important figures from the Brigham, the walls were empty."

When I last lectured in ⁦@BrighamWomens⁩ Bornstein auditorium, walls were adorned with portraits of prior luminaries of medicine & surgery. Connecting to a glorious past. Now all gone. Hope everyone is happy. I’m not. (Neither were those I asked- afraid to say openly). Sad. pic.twitter.com/Bsz89r2SBB

The portraits were relocated to different places around the hospital. And while Flier says he understands why there needed to be a change, he prefers the approach taken in another Harvard meeting place called the Waterhouse Room.

It had long been decorated with paintings of former deans, says Flier, and "all of those individuals were white males. I am among them now, hanging up there as the most recent former dean of Harvard Medical School."

But right up there with Flier's portrait are photographs of well-known female and African-American physician-scientists, he says, because his predecessor added them to the walls of that room.

But some argue that the old portraits themselves have erased history, by glorifying white men who hold power while ignoring the contributions to science and medicine made by women and people of color.

One rare exception, and a poignant example of the power and meaning of portraits in science and medicine, can be found at the Johns Hopkins Hospital. There, a black technician named Vivien Thomas worked for a white surgeon named Alfred Blalock. Even though Thomas had only a high school degree, he joined Blalock's lab in 1930; the pair spent decades developing pioneering techniques for cardiac surgery together.

The last time the two ever spoke, Blalock was in poor health, and in a wheelchair. Together they went to see the portrait of Blalock that had recently been hung in the lobby of the clinical sciences building, which had been named after him.

Soon after that, Blalock died. And a few years later, Thomas received word that a group of surgeons was commissioning a portrait of him. "My first reaction was that surely I must be dreaming," Thomas wrote in his autobiography, which he originally entitled Presentation of a Portrait: The Story of a Life.

When the portrait was presented to the hospital in 1971, Thomas told the assembled surgeons that he felt proud and humbled. "People in my category are not accustomed to being in the limelight as most of you are," Thomas said. "If our names get into the print, it's usually in the very fine print down at the bottom somewhere."

In his memoir Thomas wrote, "it had been the most emotional and gratifying experience of my life." He wondered where the portrait would be hung, and thought someplace like the 12th floor, near the laboratory area, would be appropriate. He was "astounded" when Dr. Russell Nelson, then the hospital president, stated "We're going to hang your fine portrait with professor Blalock. We think you hung together and you had better continue to hang together."