Accessibility links
UK Biobank Gets Geneticists To Cooperate, Not Compete : Shots - Health News A project that shares medical information from 500,000 volunteers is driving innovative research around the world. The richness of the database means scientists are motivated to make it even better. 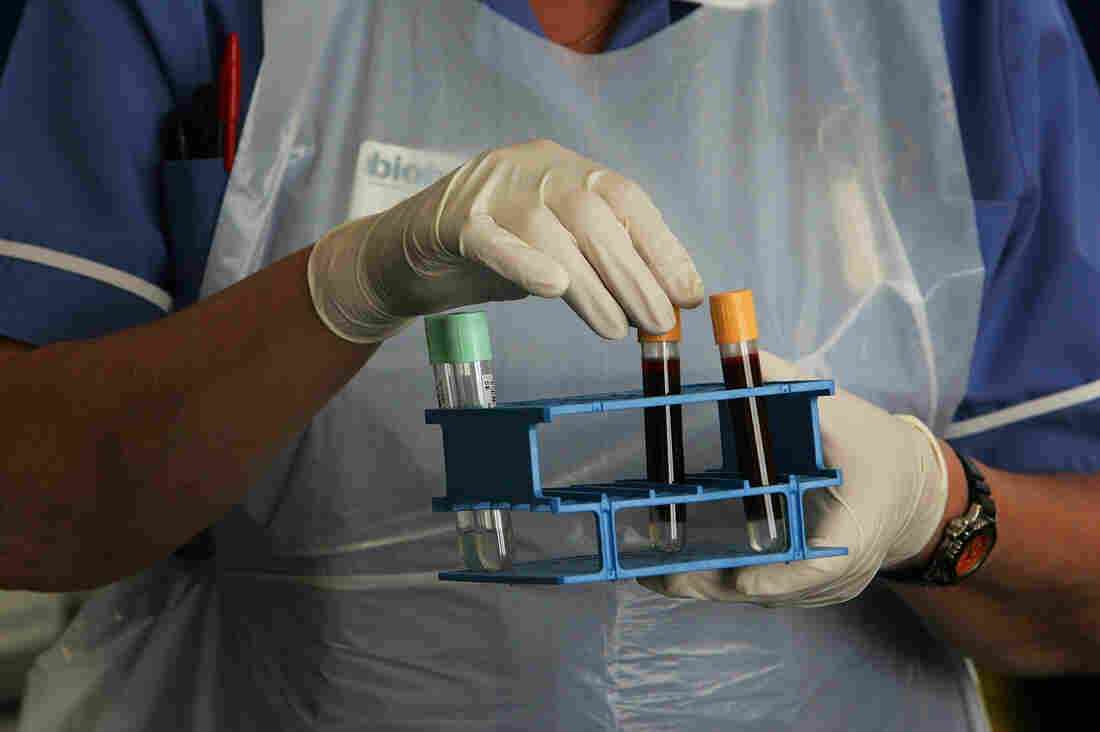 UK Biobank, based in Manchester, England, is the largest blood-based research project in the world. The research project will involve at least 500,000 people across the U.K., and follow their health for next 30 years or more, providing a resource for scientists battling diseases. Christopher Furlong/Getty Images hide caption 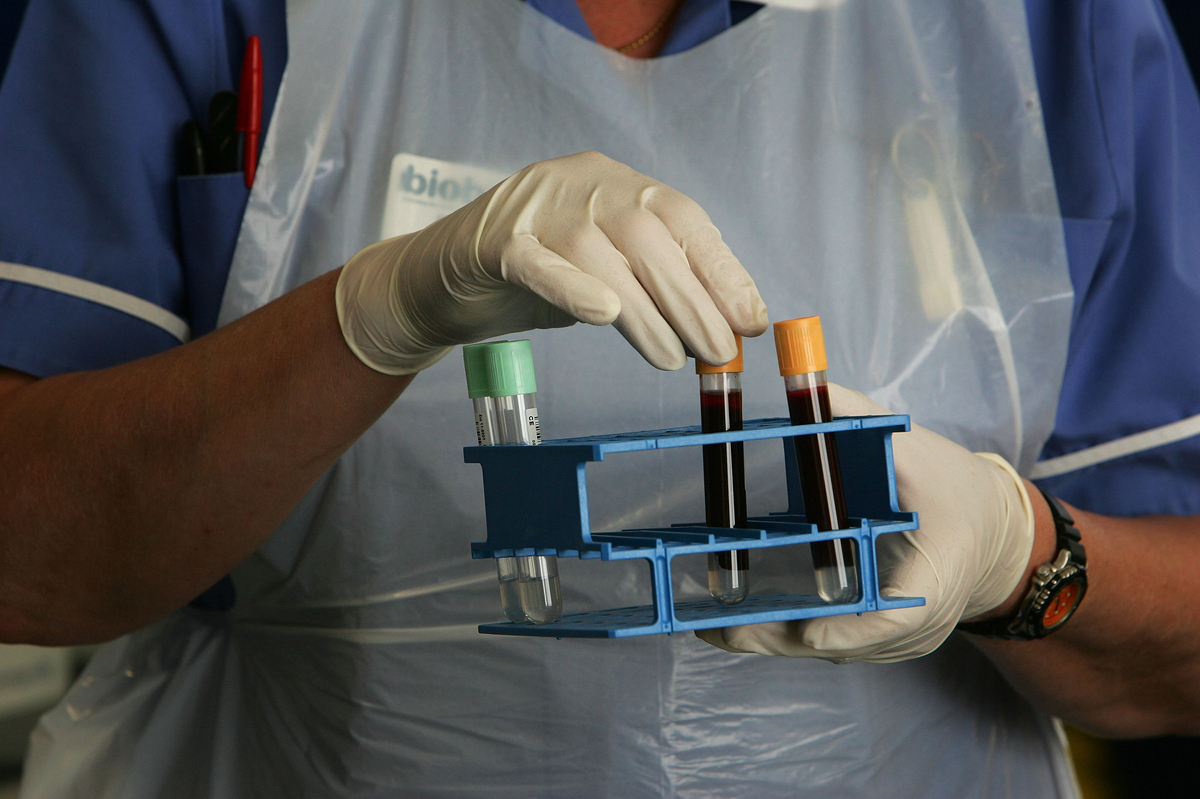 UK Biobank, based in Manchester, England, is the largest blood-based research project in the world. The research project will involve at least 500,000 people across the U.K., and follow their health for next 30 years or more, providing a resource for scientists battling diseases.

There's an astonishing outpouring of new information linking genes and health, thanks to the efforts of humble Englishmen and women such as Chritopeher Fletcher. The 70-year-old man recently drove 90 miles from his home in Nottingham to a radiology clinic outside the city of Manchester.

He is one of half a million Brits who have donated time, blood and access to their medical records to a remarkable resource called UK Biobank. The biobank, in turn, has become a resource for more than a thousand scientists around the world who are interested in delving into the link between genes, behaviors and health.

Popularity of the resource is snowballing. Just this week, a major study using the data explored the genetics of same-sex sexual behavior. And as researchers discover the biobank's value, there's a strong incentive to add to the database to make it even richer.

That's why Fletcher finds himself at a radiology clinic. A decade ago, he had donated a blood sample to the nascent UK Biobank and told scientists they were free to poke around in his medical records.

The scientists have now asked him back, to contribute medical scans that will help medical researchers correlate imagery with health conditions and genes.

Fletcher will get a scan of his heart and internal organs, to look for buildup in his arteries and fat deposits around his organs, as well as a brain MRI.

He will spend half a day at the clinic, donating his data to science.

"I'm in the fortunate position that I have very little wrong with me, and I got to 70 years old, and I just thought I should give a bit of public spiritedness, really," Fletcher says. "Nothing more, nothing less, really."

"So far, 10,000 researchers from around the world have registered with the resource and we've now gone past 1,000 different research projects that are ongoing."

What makes UK Biobank valuable is not only the half-million volunteers, whose health will be followed for decades, but also its community-spirited scientific strategy. Chief scientist Dr. Cathie Sudlow says the organizers, in a break from their usual ways, aren't out to answer their own scientific questions, but to serve their colleagues.

"I'll freely admit that when I first started out in the biobank I couldn't really believe that we were all going to work really hard to make data available for other people," she says. "And that is because I came from this traditional, kind of slightly paranoid, somewhat territorial, academic background."

The scramble for research funds creates competitive incentives in much of academic science today. This biobank is different.

Between 2006 and 2010, the biobank organizers hit the pavement to recruit middle-aged volunteers. Their medical data are stripped of personal information and put into a database that scientists with a legitimate request can download and study.

The project was not an immediate hit with scientists.

"The thing that really changed the landscape from the point of view of use was when the funders – the Medical Research Council and the Wellcome Trust — decided to provide us with the funding to genotype all half-million of the participants," says Dr. Rory Collins, the project's principal investigator.

A genotype is essentially a snapshot of a person's genetic variants. Using that, scientists can look at people with specific traits or medical conditions and search for a matching genetic pattern.

One of the most significant discoveries so far is a new understanding of Type 1 diabetes. It used to be called juvenile diabetes, but that's a misnomer.

"Type 1 diabetes is far more common and relevant in middle age than had been previously appreciated," Sudlow says. "It's always been thought to be a disease of younger life onset." A study based on UK Biobank samples found a genetic signature of people at high risk of developing this condition, and recognized that a lot of adult-onset diabetes was Type-1 disease.

Once scientists around the world discovered that they could use the biobank to do this kind of research without even drawing a blood sample, Collins says interest took off.

"So far, 10,000 researchers from around the world have registered with the resource and we've now gone past 1,000 different research projects that are ongoing," he says.

New research papers appear in the scientific literature almost daily. And though the subjects themselves are primarily Brits, researchers from all over the world are welcome to probe the data.

Collins says the idea is to democratize research so scientists who might struggle to get funding and other resources can also make important contributions, using this dataset.

In Queensland Australia, Prof. Peter Visscher has plenty of resources and a lab teeming with scientists interested in exploring human genetics. They have downloaded data repeatedly from UK Biobank. In one project, they found a genetic signature that illuminates why people tend to select mates with similar height and educational attainment.

"I thought it was quite cool because the theory of that's been known for more than 100 years, but we've never been able to demonstrate that, because we've never had this kind of data," Visscher says.

He uses other genetic repositories for his studies, including a big one managed by the U.S. National Heart Lung and Blood Institute. He says the downside is it has less detailed information about the people who donated that DNA.

"That's what's so special about the U.K. biobank," Visscher says. "All individuals have been measured for all traits, essentially."

Visscher does what's called genome-wide association studies, which are a bit controversial. It's often not clear how to make use of the correlations that come from this kind of analysis.

Sudlow acknowledges that figuring out how to use that information is still a work in progress, "but the biobank has opened this major possibility to interrogate these kinds of questions at [an enormous] scale."

And in the process, it's expanded imaginations about what else this collection can yield. The U.S. pharmaceutical company Regeneron offered to sequence the genes of all half-million participants. (Genes make up 1-2% of a person's DNA, and a genes-only sequence is called an exome.)

Company scientists get an exclusive first-look at this data, but it will soon be made available to everyone who has access to the biobank.

That kind of deal adds value to the data, and biobank executives are willing to accept the trade-off that gives the company donating those services an exclusive preview of the findings.

As Sudlow watches the biobank's success feed on itself, "it's made me realize how fun it is to do stuff that actually makes things happen," she says. "That's a really legitimate and interesting thing to do," and is rewarding, she says, even though she is not actively pursuing her own research agenda in the process.

Sudlow expects collaboration, rather than traditional competition, will be what really drives medical science forward.