Accessibility links
Measles Immunity: Some Millennials Need Another Shot : Shots - Health News Americans born in the '70s and '80s may not be immune to measles, health officials say. If you're traveling to a country or region having an outbreak, consider a second dose of vaccine before you go. 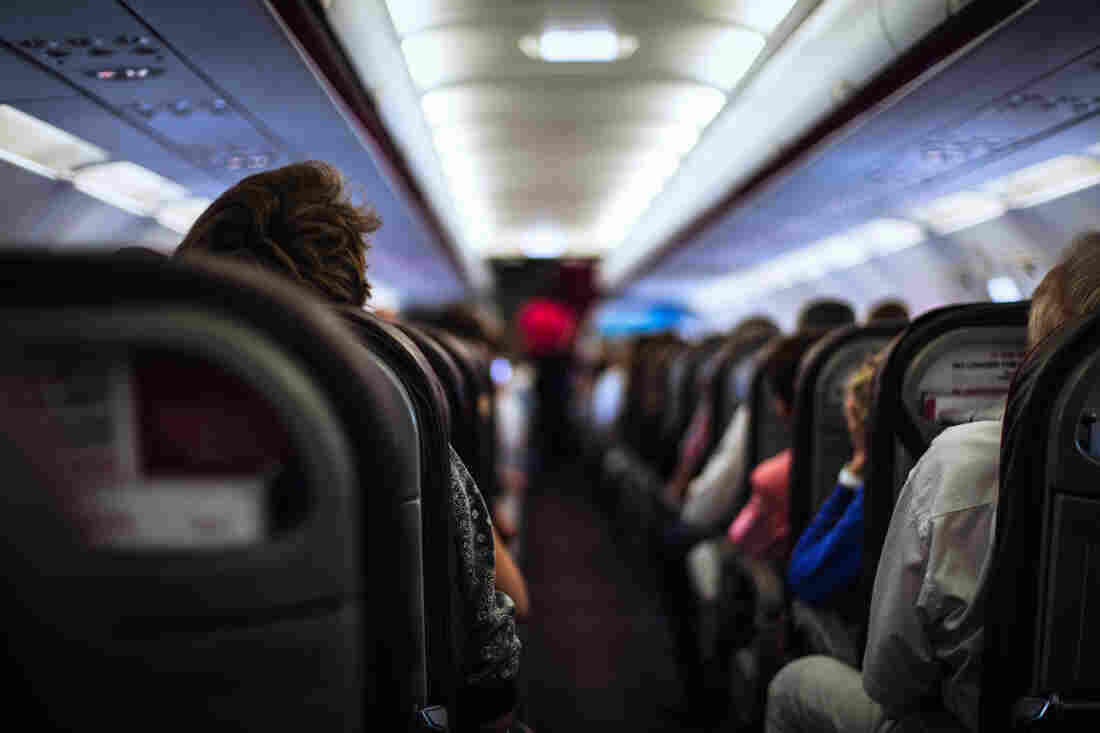 The measles virus is highly contagious. If someone with measles coughs or sneezes, the virus in those droplets can survive for two hours afterward — infecting about 90% of the people lacking immunity who pass through that space. Erik Witsoe/EyeEm/Getty Images hide caption 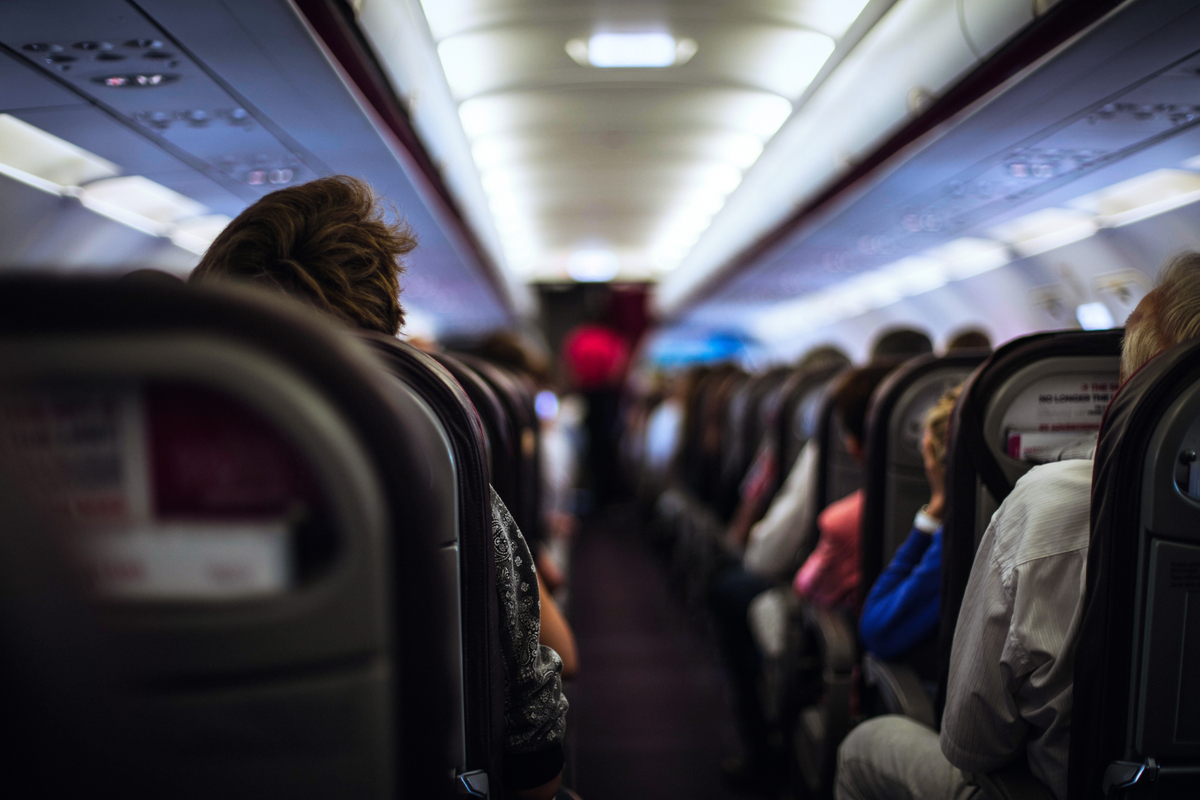 The measles virus is highly contagious. If someone with measles coughs or sneezes, the virus in those droplets can survive for two hours afterward — infecting about 90% of the people lacking immunity who pass through that space.

Destination: Bulgaria. It's a small country in Eastern Europe, often overlooked by American tourists. But my husband's father grew up in Bulgaria, so it's long been on our travel list.

It's also on the list of countries with recent measles outbreaks. Bulgaria has had almost 800 cases this year, according to the World Health Organization.

In California, where I live, four of the five outbreaks that occurred this year were linked to international travel. Most of those travelers were infected in the Philippines or Ukraine, which have been experiencing severe outbreaks, and 37% of cases overall were imported from Europe. New measles infections continue to be reported, with California at 67 cases as of Aug. 28.

The measles virus is highly contagious. If someone who is sick visits a popular tourist site and coughs, or rides the subway and sneezes, the virus can live in the air for two hours after they leave. If people who lack immunity and are unvaccinated pass through the same space, 90% of them will get sick.

That's why the travel nurse at my health center wants to check on my vaccination status before I leave for Bulgaria. This is routine for Gen Xers and millennials born in the '70s and '80s, because when the measles, mumps, rubella vaccine (MMR) was first introduced in 1971, scientists recommended just one dose. But, over the years, they noticed some kids still got measles. It wasn't until 1989 that public health officials changed the guidelines to two doses.

But a lot of people who are now in their 30s and 40s, like me, aren't sure if they ever got the second dose.

So my travel nurse recommends I go to the lab to get a blood test to check my immunity. It's a basic test that looks for antibodies to measles, and should come back positive or negative — yes or no.

But my results come back "borderline." In other words, maybe I'm immune, but maybe I'm not.

"The blood test is imperfect," says Dr. Art Reingold, a professor of epidemiology at the University of California, Berkeley. "If you have antibodies, then we're pretty certain you're immune. But if you don't have antibodies you may still be immune, but your antibodies are not detectable by the test."

So it's possible I got a false negative. There's just no way to know for sure.

"I know a lot of people who would say that's a good reason not to do testing," Reingold says with a laugh. "Because you get these results. You don't know how to interpret them. People worry."

So now what? My doctor suggests getting another dose of measles vaccine. It's safe. But when I look into it, it turns out, there are some possible side effects listed in adults that don't occur in babies: Some studies have found that 25% of women and teenage girls get "acute arthritis" one to three weeks after getting the vaccine.

That would be right in the middle of my trip, right when my husband and I are due to arrive at Bulgaria's Black Sea coast.

I imagined lying on the beach, meditating on the rolling waves — wracked with joint pain.

"That would suck," I tell my husband, as we talk it through.

"Yeah," he replies. "But wouldn't it be more of a bummer to get measles?"

So I go back to the experts. This time I speak with Dr. Lisa Winston, an epidemiologist at San Francisco General Hospital, and a professor at UCSF. 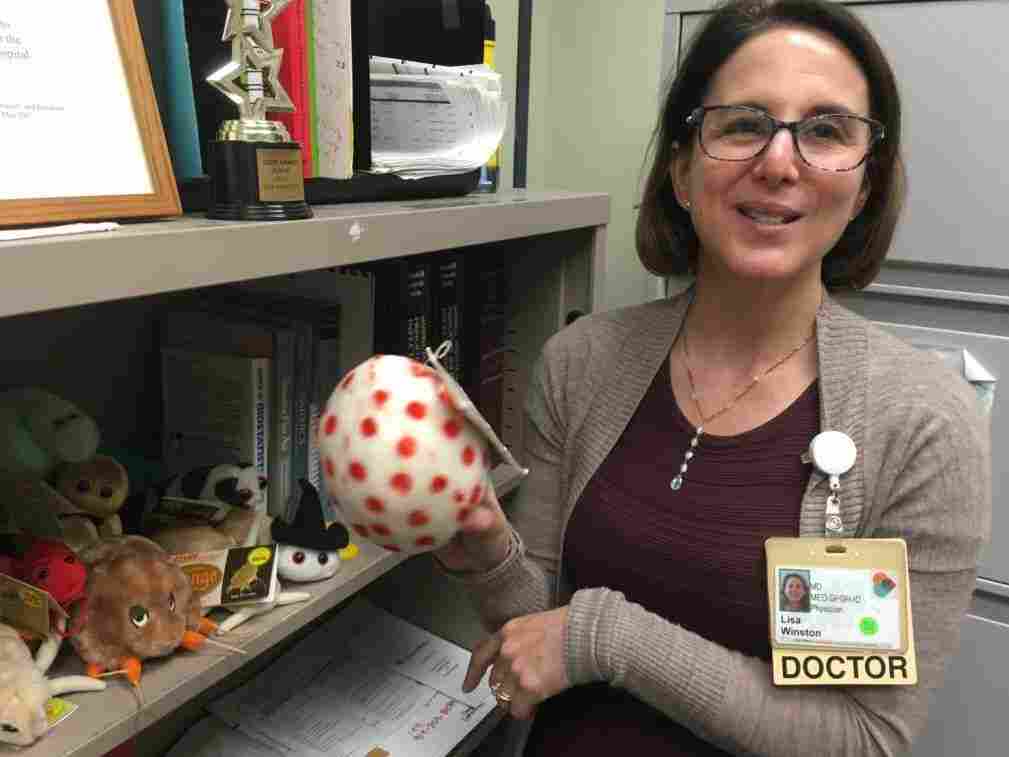 Dr. Lisa Winston, an epidemiologist at San Francisco General Hospital, holds up the stuffed version of a measles virus she keeps in her office. If you're unsure of your vaccination status and are traveling someplace with a known measles outbreak, a second dose of vaccine might be prudent, she says. april Dembosky/KQED hide caption 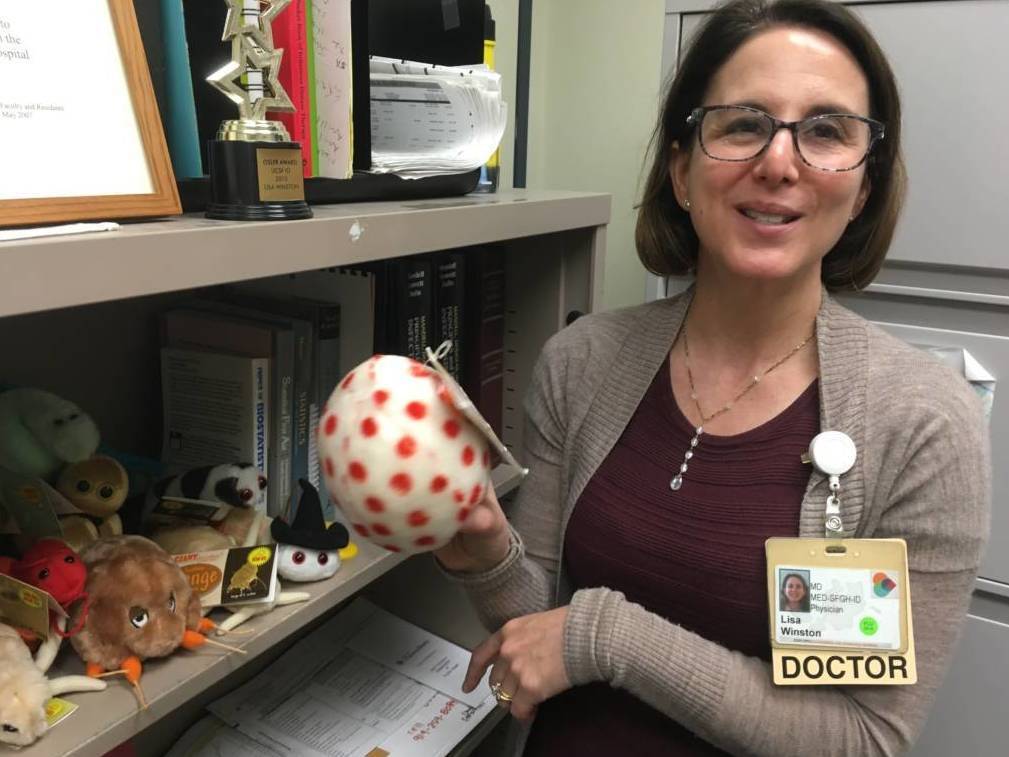 Dr. Lisa Winston, an epidemiologist at San Francisco General Hospital, holds up the stuffed version of a measles virus she keeps in her office. If you're unsure of your vaccination status and are traveling someplace with a known measles outbreak, a second dose of vaccine might be prudent, she says.

She tells me not to worry about the acute arthritis, which really means "sudden onset and short-lived." And she says the joint pain is typically mild — nothing a couple ibuprofen wouldn't take care of.

On top of that, the side effect is caused by the rubella part of the measles, mumps, rubella vaccine, and rarely occurs in women who have had one dose of MMR already.

"I would say that if the choice is between 'I'm a little worried that I may get this arthritis or some joint pain,' versus 'I'm going someplace where I'm really going to be at risk for measles,' the balance would swing toward being vaccinated for sure," Winston says.

But before I go through the trouble of another medical visit, I want to make sure I really need it. My mom was a nurse, and she kept my pediatric vaccine records. Squeezed in the margin of the paper, scrawled in black pen, it says that I got a second dose of the vaccine when I was 11. But the handwriting is hard to read and it looks so ... unofficial. This is why I got the blood test.

Winston tells me medical records are, in general, more reliable than the blood test.

"For somebody who knows that they have been vaccinated — who has their history — you would actually be considered immune," she says, "regardless of what your blood test shows."

Bottom line: If you're not sure what your vaccination status is and you're traveling to a country with a known measles outbreak, there's no harm in getting a second dose of vaccine. But if you know you've had two doses, there's no benefit to getting a third.