Accessibility links
Trumpcare: GOP's Proposed Health Plan Looks To 'Choice And Competition' : Shots - Health News President Trump promises he has a "phenomenal" health plan if the ACA is overturned in court. Here's a glimpse, according to analysts and his advisers, of what might be included in a GOP health plan. 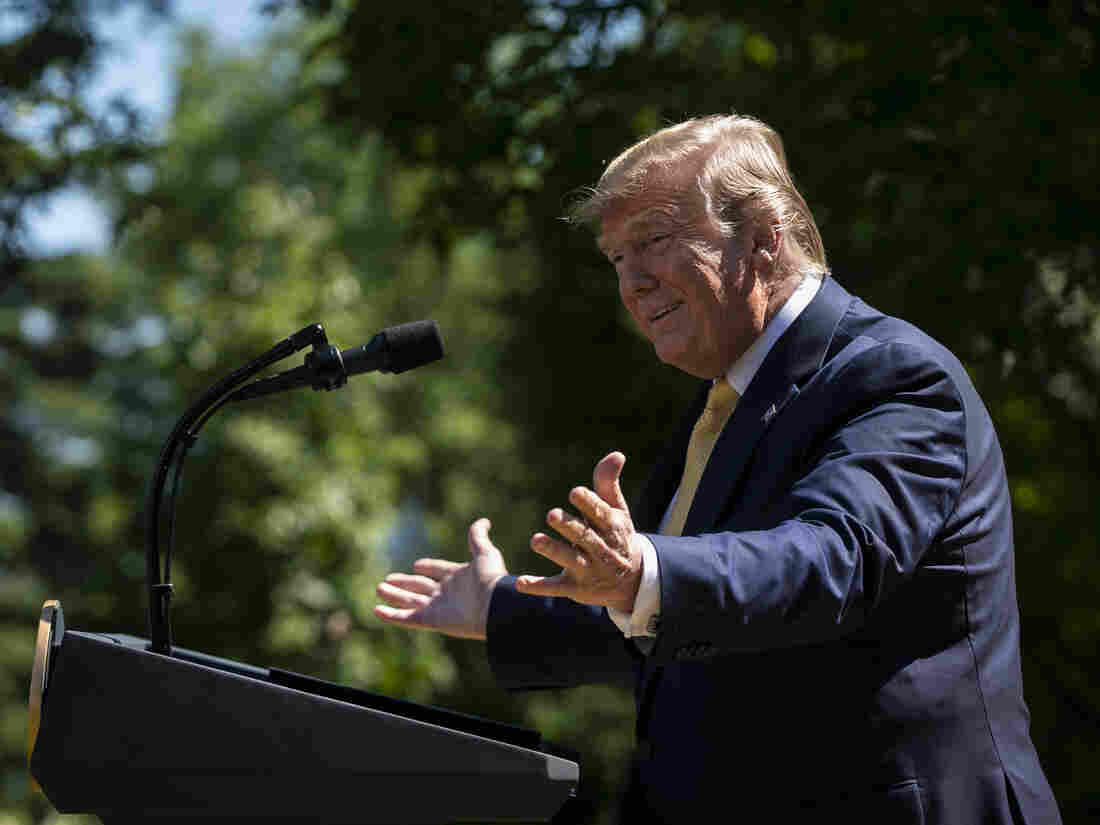 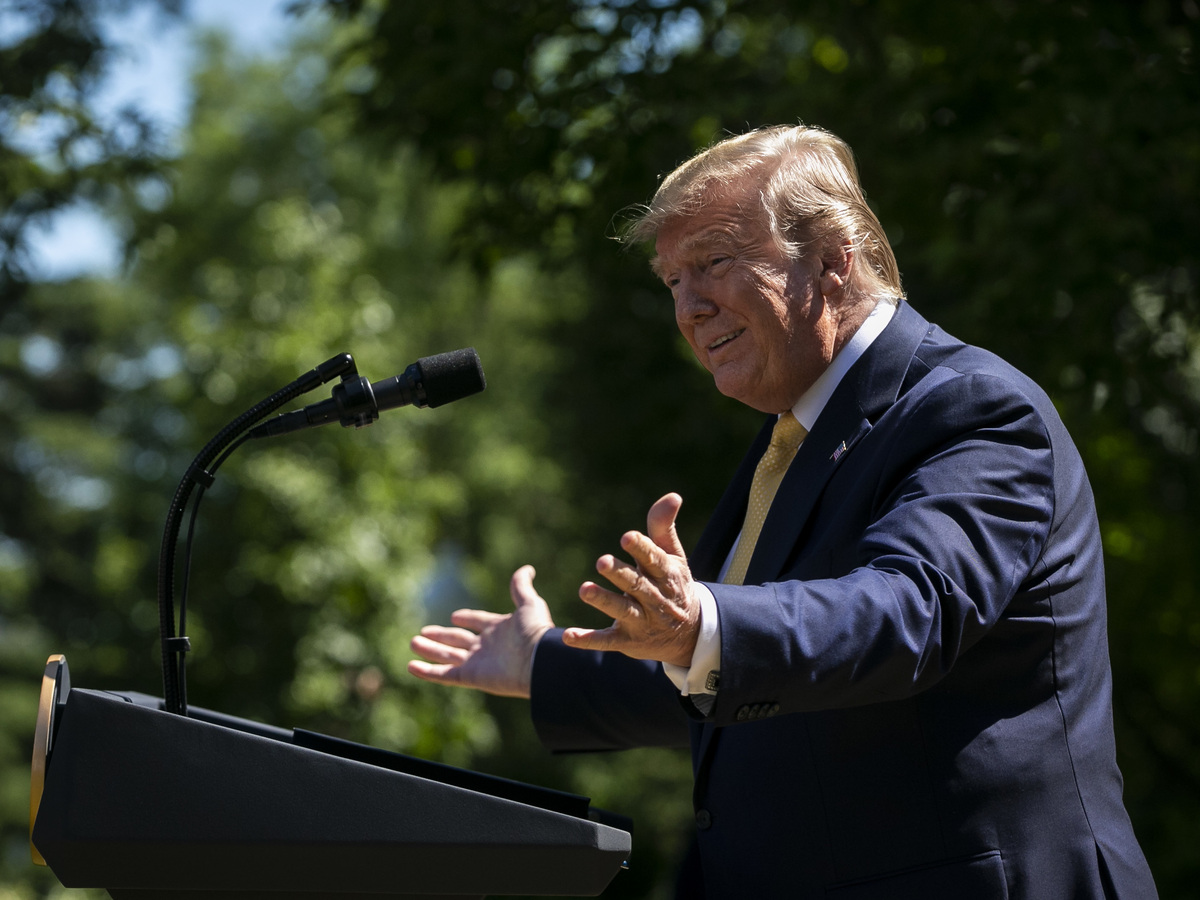 President Trump talked about expanding health coverage options for small businesses in a Rose Garden gathering at the White House in June.

While many Capitol Hill Republicans would like to avoid another public debate about whether to repeal the Affordable Care Act, President Trump and his appointees keep bringing it up — promising their own health plan that would be "phenomenal" and make the GOP "the party of health care."

"We're actively engaged in conversations" on what to do, Medicare chief Seema Verma said last month. And Trump adviser Kellyanne Conway has indicated a health care announcement might come in September.

Behind the pronouncements lies a dilemma: whether or not to stray beyond efforts underway to improve the nation's health care system — loosening insurance regulations, talking about drug prices and expanding tax-free health savings accounts — to develop an overarching plan.

For the White House, it's a fraught decision.

A comprehensive plan could serve as a lightning rod for opponents. Conversely, not having a plan for replacing some of the most popular parts of Obamacare — such as its coverage protections for people with preexisting medical conditions — could leave the GOP flatfooted if an administration-supported lawsuit now before the 5th Circuit Court of Appeals were to invalidate the sweeping health law.

"This is a real conundrum," says Dean Rosen, a Washington, D.C., health policy consultant who often advises Republicans. "There is a risk with action or inaction."

No matter how the 5th Circuit rules, its decision, which could come soon, is likely to be stayed while the issue heads to the Supreme Court. Such a delay would give the Trump administration time to flesh out a proposal if the appeals judges throw out the ACA. But it would also ensure that a health care debate is front and center during the presidential campaign.

Right now, polls show the public is focused on health costs, says professor Robert Blendon, director of the Harvard Opinion Research Program, which studies public knowledge of health care and policy issues. Consumers are concerned about what they pay at the pharmacy counter or about the sum of their insurance premiums and deductibles.

"Most voters are not interested in another debate on a new health plan," Blendon says.

But if the 5th Circuit upholds a Texas ruling overturning the entire ACA, "that changes the entire framework," he adds. "The administration could not just say, 'Oh, we'll have something great.' They would have to have something outlined."

Supporters and critics say likely elements are already in plain sight, both in executive actions and proposals in the president's budget as well as in a little-noticed interagency white paper released late last year, called "Reforming American's Health Care System Through Choice And Competition."

2 Moves By Trump This Past Week Could Reshape U.S. Health Insurance In Big Ways

The president has won praise both from conservatives and from liberals for initiatives such as his proposal to require hospitals to post their actual, negotiated prices and some strategies to lower drug prices. But legal battles from industry could thwart such initiatives.

On these topics, "a lot of what they've proposed has been pretty smart," says Shawn Gremminger, senior director of federal relations at the liberal Families USA advocacy group.

Still, Gremminger points to other administration actions — such as loosening rules on health insurers to allow sales of what critics call "junk" insurance policies, because they don't have all the consumer protections of ACA policies, or promoting work requirements for Medicaid recipients — as strong hints to what might be in any eventual election-related plan.

"I think what we'll see is a lot of that same sort of stuff, warmed over and put into a new package," Gremminger says. "We fully expect it will include a lot of really terrible ideas."

For other policy clues, some Trump advisers, like Brian Blase, a former special assistant to the president at the National Economic Council now with the Texas Public Policy Foundation, say look no further than that 2018 interagency report.

The 114-page document, a joint publication of the U.S. departments of Labor, Treasury and Health and Human Services, includes more than two dozen recommendations that broadly focus on loosening federal and state regulations, limiting hospital and insurer market power and prompting patients to be more price-conscious shoppers.

Many are long-standing, free market favorites of Republicans, such as increasing the use of health savings accounts — which allow consumers to set aside money, tax-free, to cover medical expenses. Other ideas are not typically associated with the GOP, such as increased federal scrutiny of mergers of hospitals and insurers; such mergers have driven up prices.

The white paper also calls for easing restrictions on Medicare Advantage plans, which offer an alternative to the traditional fee-for-service Medicare. The Trump proposal would allow the advantage program to have smaller networks of doctors and hospitals — presumably ones that agreed to charge less.

"The administration knows where it is going on health care," Blase says.

If the court strikes down the ACA, he expects the administration to release a plan supporting "generously funded, state-based high-risk pools."

Such pools existed in most states before the ACA. They helped provide coverage for people with preexisting conditions who were denied policies by insurers. But the pools were expensive, so they often were underfunded — capping members' benefits and producing long waiting lists.

Not everyone thinks the white paper is a plan, but more of a "combination of policy ideas and political statements," says Joe Antos at the conservative-leaning American Enterprise Institute.

Still, he doubts the GOP needs a comprehensive health proposal. Republicans are more likely to gain politically by merely attacking the Democrats' ideas, Antos says, especially if the Democratic nominee backs proposals for a fully government-funded health care system, such as the "Medicare for All" plans some candidates support.

Republicans will "have their own one-liners, saying they are dedicated to protecting people with preexisting conditions. That might be enough for a lot of people," Antos says.

Politically, taking on the Affordable Care Act — or not taking it on — are both risky. While many voters don't understand all that the federal health law does, some of its rules enjoy broad support. That's particularly true of the protections for people with medical problems — under the current law, insurers are barred from rejecting them for coverage or charging them more than people without such conditions.

The Republican effort to repeal the ACA galvanized activists during the 2018 midterm elections and is credited with boosting Democrats to victory in many House districts.

Analysts on both sides expect concerns about health costs and health law to play a large role again in 2020.

For Republicans, "the risk of doing nothing potentially leaves no port in a storm if the ACA is overturned legally," Rosen says. "But a more limited version, which is what most Republicans are for, is likely to be met with the same concerns. No matter what the president says, it won't be enough for the Democrats."

Opinion poll analyst Blendon says there is an additional unknown: Which Democrat will win the nomination — and what type of coverage will she or he back?

Even as the GOP is split on how to address health care concerns, so too are the Democrats.

"If they are reading the same polling data as I am, they would have serious proposals for lowering drug and hospital costs, but not offer a national health plan," Blendon says.

The Democrats' most progressive wing, led by Sens. Bernie Sanders of Vermont and Elizabeth Warren of Massachusetts, wants Medicare for All, which would essentially eliminate private and job-based coverage. Recent polls have shown voters are not keen on losing private insurance.

"If the Democratic nominee is running on keeping the ACA, the Republican will have to have an alternative," Blendon says. But if the nominee supports Medicare for All, Blendon predicts simply a GOP "anti-campaign" targeting the Democrat's idea as unworkable, socialist or a danger to Medicare.