Accessibility links
To Combat Youth Vaping, Trump Administration Plans To Banish Flavored Vapes : Shots - Health News With hundreds of unexplained cases of vaping-related illness, and the sharp rise in youth vaping, the Trump administration is acting to crack down on kid-friendly vape flavors. 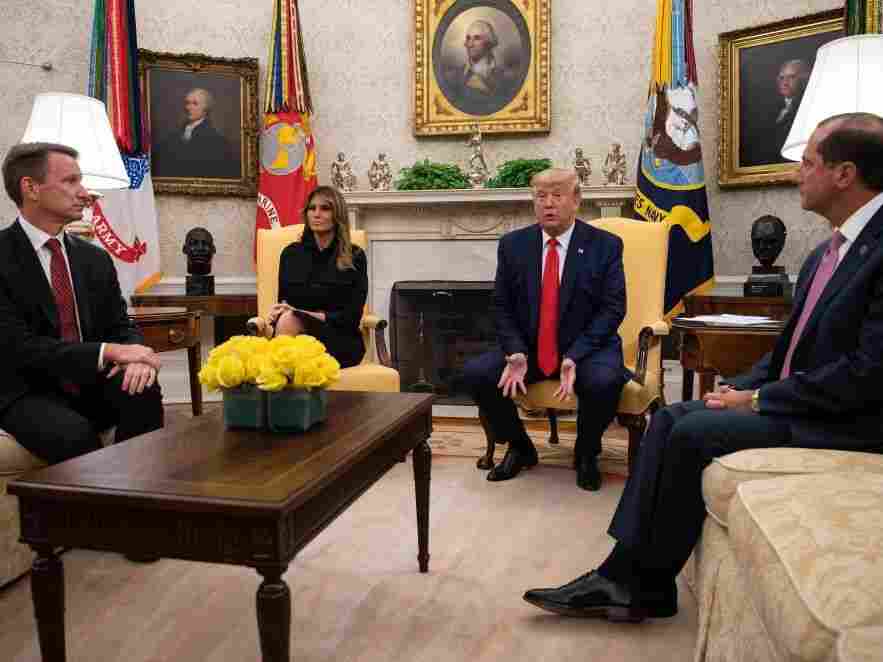 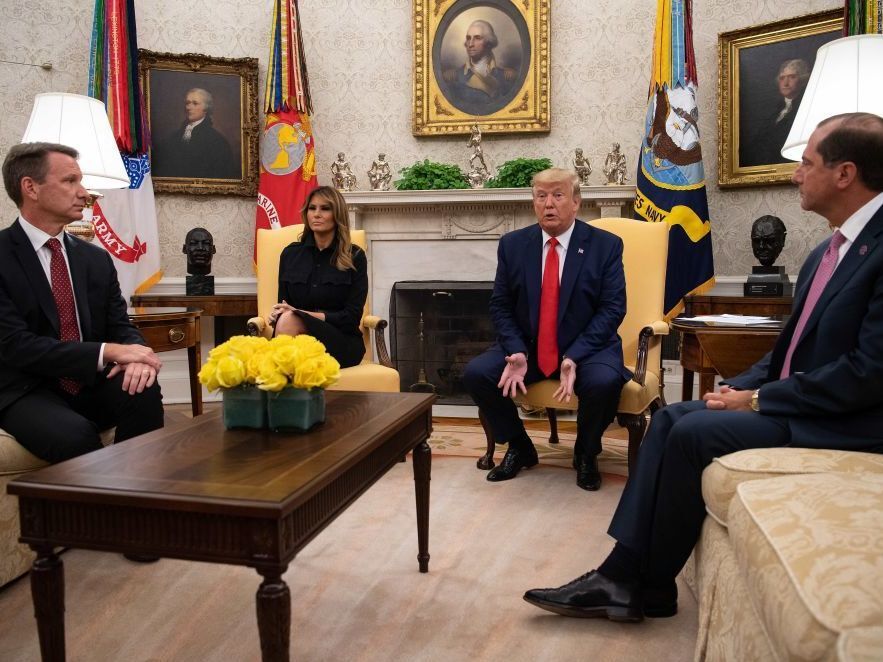 President Trump speaks to the press with first lady Melania Trump and Acting Food and Drug Administration Commissioner Norman Sharpless (left) and Health and Human Services Secretary Alex Azar in the Oval Office at the White House on Wednesday.

President Trump announced Wednesday that the administration will move to force e-cigarette companies to take flavored vaping products off the market, as young people's use of them continues to rise and reports emerge of deaths and illnesses tied to vaping.

"Vaping has become a very big business, as I understand it, but we can't allow people to get sick and allow our youth to be so affected," Trump said.

The Food and Drug Administration announced plans to finalize a policy in the coming weeks that will enable it to remove many nontobacco flavored e-cigarettes from the market.

"We intend to clear the market of flavored e-cigarettes to reverse the deeply concerning epidemic of youth e-cigarette use that is impacting children, families, schools and communities," Health and Human Services Secretary Alex Azar said in a statement. "We will not stand idly by as these products become an on-ramp to combustible cigarettes or nicotine addiction for a generation of youth."

When vaping products came on the market, some people welcomed them as a potentially safer alternative to cigarettes. And while millions of adults have switched from cigarettes, vaping has also drawn in a new generation of nicotine addicts. Vaping jumped dramatically among high school students between 2017 and 2018, rising to nearly 21% of high schoolers.

Preliminary data from the latest survey of youth tobacco use shows this trend is continuing: More than a quarter of high school kids used e-cigarettes in 2019, according to HHS.

"We are seeing a continued surging of middle school and high school children using e-cigarettes, increasing frequency of their use and children being drawn in by flavored cigarette products," Azar said at a news conference.

Azar said he was directing the FDA to develop a plan that will ban those child-friendly flavors such as bubble gum, mango and mint. Tobacco-flavored products would still be allowed, at least for now, he said — as long as they're intended for adults as an alternative to cigarettes.

"If we find that children start surging into tobacco-flavored e-cigarettes or if we find marketing practices that target children, we'll engage in enforcement actions there also," Azar said.

The policy is the culmination of the work of former FDA head Scott Gottlieb who made fighting youth tobacco use one of the pillars of his tenure. He told NPR in March that vaping products at that time were on the market "out of an exercise of enforcement discretion by the FDA."

Paul Billings, national senior vice president of advocacy at the American Lung Association, says his group and others sued the FDA to force regulation of vaping products. He suspects the recent outbreak of serious lung disease among vapers has finally put these problems in the spotlight.

"And unfortunately it's taken this crisis to finally prompt this action," he said.

Health officials don't know whether flavored products have contributed to more than 450 recent cases of lung disease, including six deaths. But people who are addicted to nicotine in vaping devices put themselves at risk, he says. The FDA says it intends to finalize its new policy in the coming weeks

"We must act swiftly against flavored e-cigarette products that are especially attractive to children. Moreover, if we see a migration to tobacco-flavored products by kids, we will take additional steps to address youth use of these products," Acting FDA Commissioner Ned Sharpless, said in a statement.