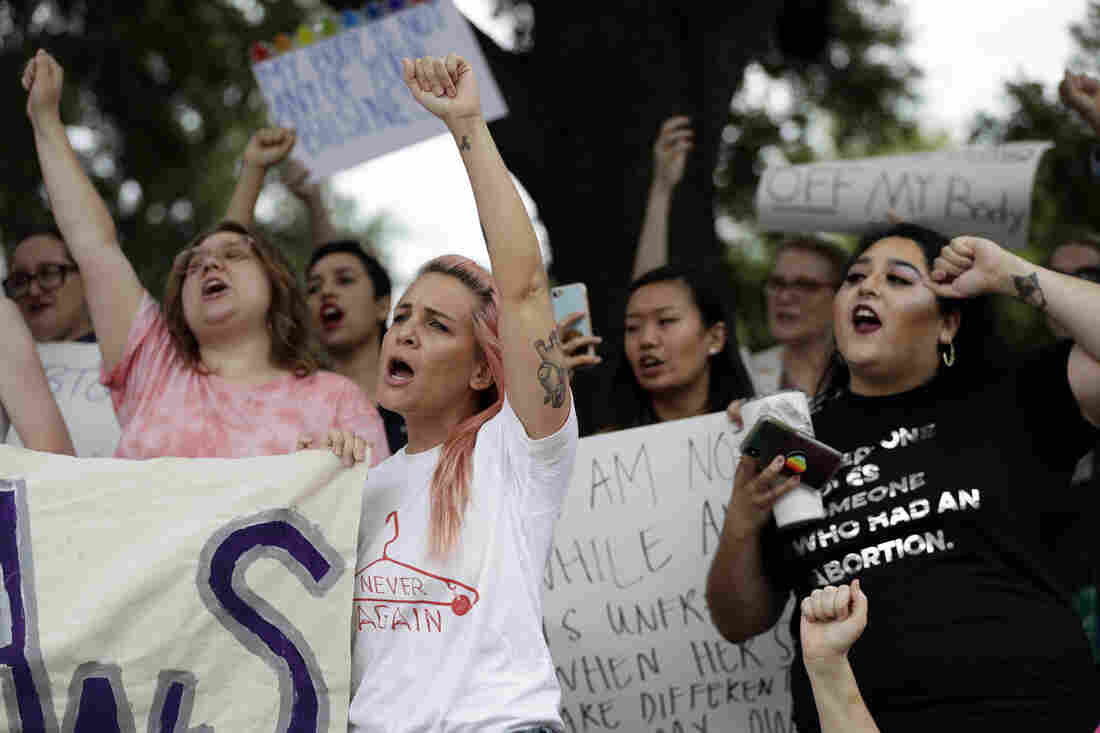 A group gathers at the state capitol in Austin, Texas, in May to protest abortion restrictions. In defiance of the state's ban on city funding of abortion providers, the Austin City Council has found a workaround to help women seeking the procedure. Eric Gay/AP hide caption 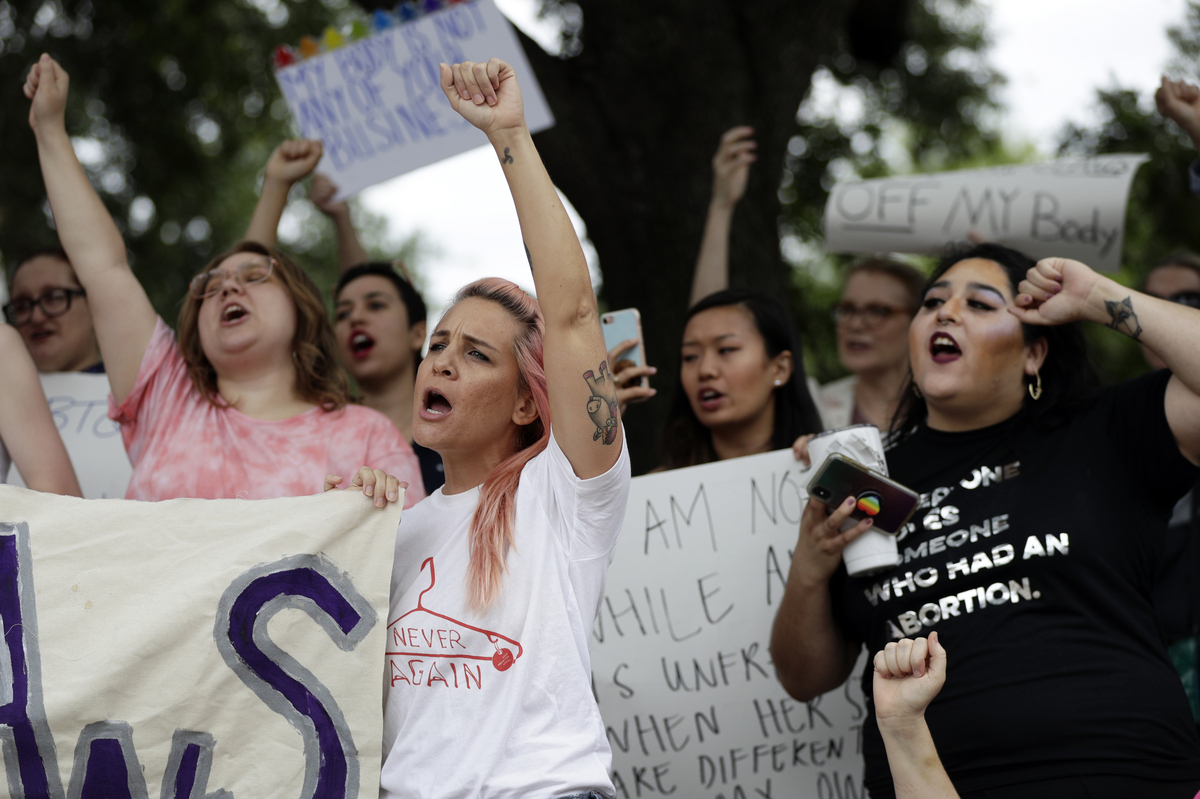 A group gathers at the state capitol in Austin, Texas, in May to protest abortion restrictions. In defiance of the state's ban on city funding of abortion providers, the Austin City Council has found a workaround to help women seeking the procedure.

Austin is about to become the first city in the U.S. to fund groups that help women who seek abortions pay for related logistical costs, such as a babysitter, a hotel room or transportation.

The move is an effort to push back against a new Texas law that went into effect Sept. 1. The state law bans local governments from giving money to groups that provide abortions — even if that money doesn't pay for the actual procedure.

Last week, the Austin City Council approved a line item for the city's latest budget that, as of Oct. 1, sets aside $150,000 to pass along to nonprofits led by abortion rights activists that provide "logistical support services" for low-income women in the city.

Supporters of the new city budget item describe it as a unique workaround to the state's law, because none of these groups actually provide abortions.

"The city has to find creative ways to help vulnerable communities in our city, and I see this as just another way," says Councilwoman Delia Garza, Austin's mayor pro tem.

John Seago, the legislative director for Texas Right to Life, says that though Austin is not violating the letter of the state law, its leaders are clearly violating "the principle" behind it.

"I don't think it's any coincidence that you have a majority-female council making these kinds of issues a priority. We have seen how this right has been chipped away at."

Shortly after the city's budget was passed last week, former Austin Councilman Don Zimmerman sued the city in an effort to block the funding. In his lawsuit, filed in a Travis County district court, Zimmerman claimed "this expenditure of taxpayer money violates the state's abortion laws."

Supporters of Austin's effort say the budget item is on solid legal ground. They also say it's an important step in ensuring that low-income women, at least locally, can obtain legal abortions in a state that has been steadily scaling back access to the procedure in the past decade.

Erika Galindo, an organizer with the Lilith Fund, told the Austin City Council during a meeting this summer that Austin should take a stand as some cities pass all-out bans on abortion. In fact, earlier in the summer, Waskom — a small city in East Texas — banned the procedure and declared itself the state's first "sanctuary city for the unborn."

"The city of Austin has an opportunity to set a new standard for creative and equitable solutions for communities at a time when state lawmakers and local governments like Waskom's city council have turned their backs on low-wage workers and women of color," Galindo said.

Austin's city leaders say the makeup of their city council also likely played a small role in the decision to fund these programs. While Waskom's ban was passed by an all-male council, Austin's majority-female city council decided to take a different approach.

"I don't think it's any coincidence that you have a majority-female council making these kinds of issues a priority," Garza says. "We have seen how this right has been chipped away at — all kinds of barriers being placed in front of women who are simply seeking an option that is still a constitutional right in this country."

The city's leaders and staff are still working out how women will qualify for the money and what groups to contract with, but it's expected that some groups that are already doing this work across the state will be getting city support.

Among those groups is Fund Texas Choice, a statewide nonprofit group that provides travel arrangements for abortion appointments for women in Texas who can't afford them. Sarah Lopez, an organizer with the group, says the group's help can include providing women with gas money, bus tickets or ride-shares — and sometimes a hotel room to recuperate in.

More often than not, Lopez says, she's helping women who are already parents and who can barely afford the procedure itself — let alone all the costs that come with actually making it to the appointment. For many of these women, she says, just a little help goes a long way.

"I was chatting with someone yesterday," Lopez says. "She had just made her appointment but then rescheduled because she was like, 'Oh, I didn't realize I would have to be gone for three or four days — so I had to push my appointment another week and a half in order to find child care.' " (Texas law requires at least two office visits before a woman can get an abortion. And women living in rural parts of the state often have to travel 200 miles away, or more, to the closest abortion clinic.)

The groups that facilitate such support won't be able to use Austin's allocated funds for women who reside outside the city, though. And in Texas, travel barriers are even bigger outside major cities.

In 2013, Texas lawmakers passed a controversial law that imposed strict restrictions on abortion providers in the state. That law, known as House Bill 2, required clinics to be equipped and staffed like surgical centers, and it required doctors who provide abortions to have admitting privileges at a nearby hospital. Following that law's passage, many clinics around the state shut their doors.

Even though the U.S. Supreme Court eventually struck down those restrictions, many of these clinics have yet to reopen – especially the clinics that closed in rural parts of Texas.

Despite Austin's new plan, women living in parts of the state that don't have a clinic will still have to rely on statewide programs such as the one run by Lopez's group — and such programs have limited budgets. Still, Lopez says, Austin's effort does take some of the pressure off such groups financially and frees up more money for women living in rural areas.

"I think it's incredible," Lopez says of the Austin decision. "I really hope to see that other cities in Texas kind of follow suit."