Accessibility links
Pain Relief From Exercise? Brisk Walks Can Make A Difference : Shots - Health News Never mind a runner's high — the buzz some people say they get after a run. Neuroscientist Benedict Kolber was more interested in how to generate pain relief via a brisk walk. It can really work. 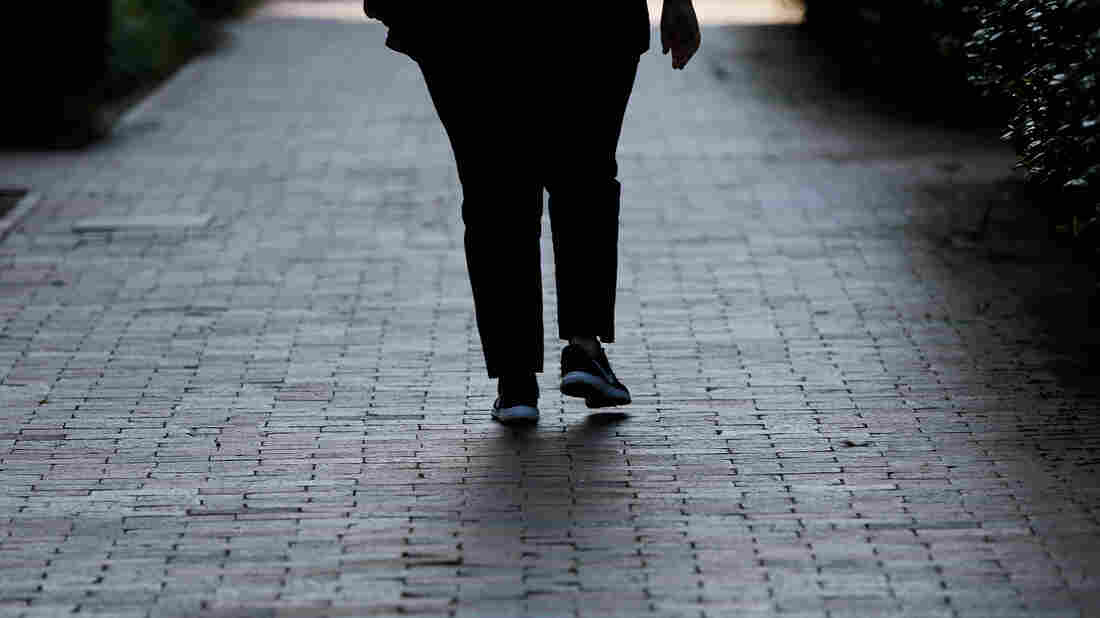 Emma Dehne, who lives in Chapel Hill, N.C., had debilitating pain in her knees, starting around age 40, and was ultimately diagnosed with osteoarthritis. Back then, just climbing stairs was very painful, she says, and exercising seemed out of the question. Eamon Queeney for NPR hide caption 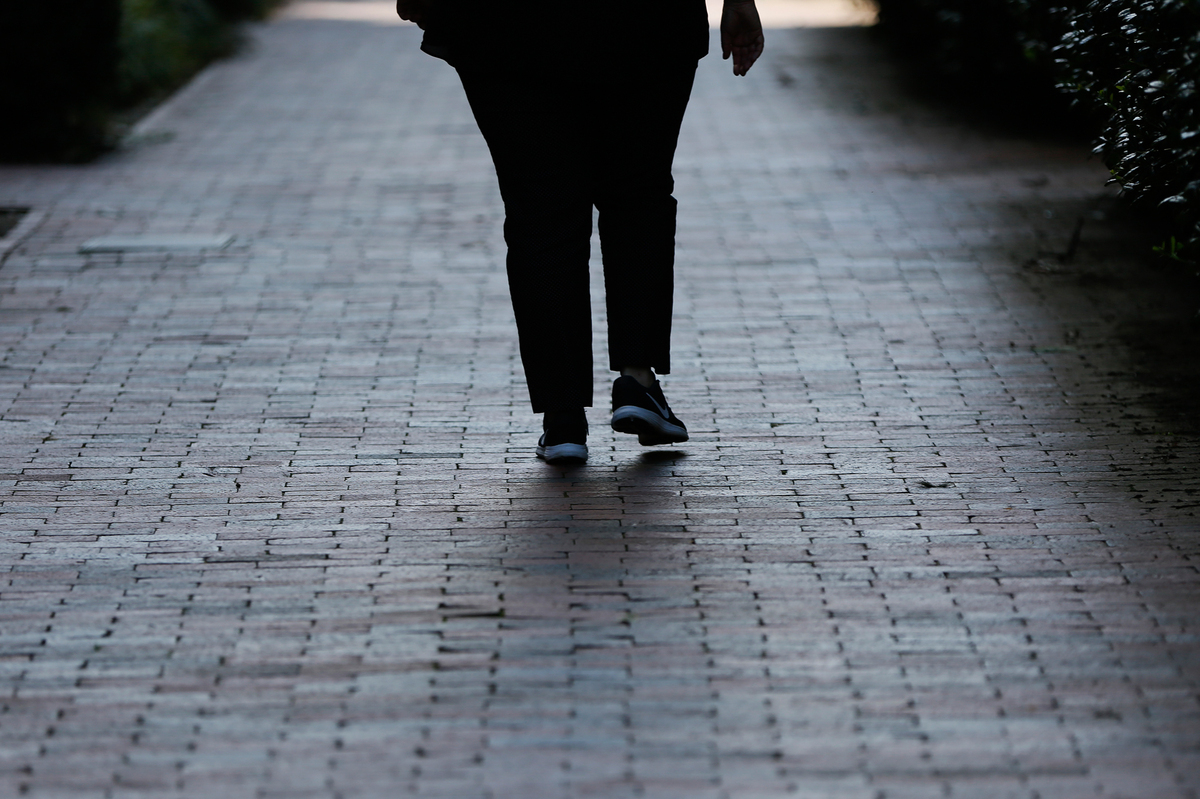 Emma Dehne, who lives in Chapel Hill, N.C., had debilitating pain in her knees, starting around age 40, and was ultimately diagnosed with osteoarthritis. Back then, just climbing stairs was very painful, she says, and exercising seemed out of the question.

For people who live with chronic pain, getting up, out and moving can seem daunting. Some fear that physical activity will make their pain worse. But in fact, researchers find the opposite is true: The right kind of exercise can help reduce pain.

Today, Emma Dehne agrees. Dehne is 44, lives in Chapel Hill, N.C., and works as a business officer in the office of the executive vice chancellor at the University of North Carolina. She says her commitment to exercise is relatively recent.

Just a year and a half ago, Dehne pretty much avoided any physical movement she didn't have to make. Just climbing stairs was painful — "sometimes to the point where I would have to hold on to the banister to help myself up," she says, "and I couldn't even extend my leg." At times, it felt as though the ligaments in her knees "were tearing."

Dehne was diagnosed around age 40 with osteoarthritis in both knees, a painful swelling and deterioration of the cushioning cartilage in those joints that reduces their range of motion. Luckily for her, she says, she worked at the Thurston Arthritis Research Center at the University of North Carolina. The woman working in the cubicle next to hers ran a program that encouraged people with osteoarthritis to start walking to help reduce their pain.

Dehne was skeptical but felt she was just too young to be burdened by this disease; she agreed to give brisk walks a try. In the beginning she felt stiff, tired and out of breath. That changed quickly.

"I mean literally, after a few days, I started to feel looser in my joints," she says. "I wasn't as out of breath, and my mood started to improve."

She started out with 15- to 20-minute walks; today, Dehne walks about 40 minutes five times a week. She feels great being out in nature, breathing fresh air, taking in the scenery and talking to neighbors. As for her knees?

"My knees feel like they did when I was young," Dehne says. "They don't hurt me anymore." And stairs? No problem. "I look up at them and say, 'Oh yeah, that's OK. I can do that — I can walk to the third floor of my building.' "

It might seem hard to believe that walking with a painful joint could actually help reduce the pain. But movement helps mitigate the pain and damage of osteoarthritis in a number of ways. 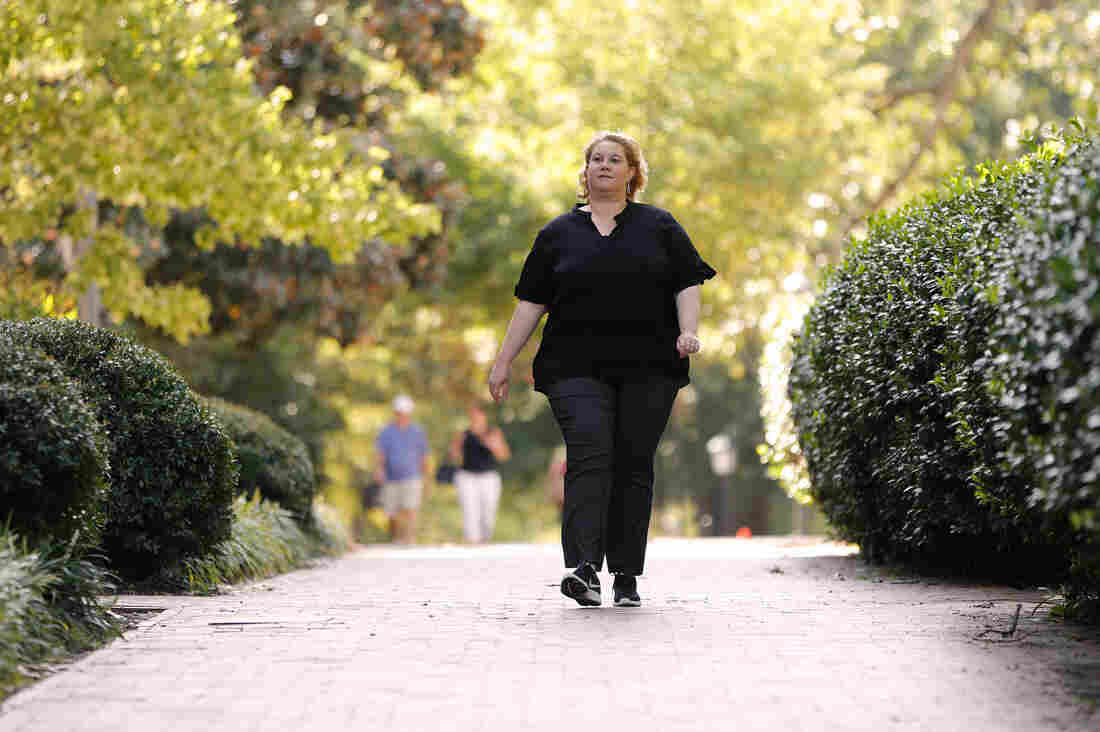 On the advice of a co-worker, Dehne joined a six-week program through which she learned how to safely walk to ease her pain. Now Dehne briskly walks for exercise and enjoyment multiple times a week. Her knees, she says, "don't hurt me anymore." Eamon Queeney for NPR hide caption 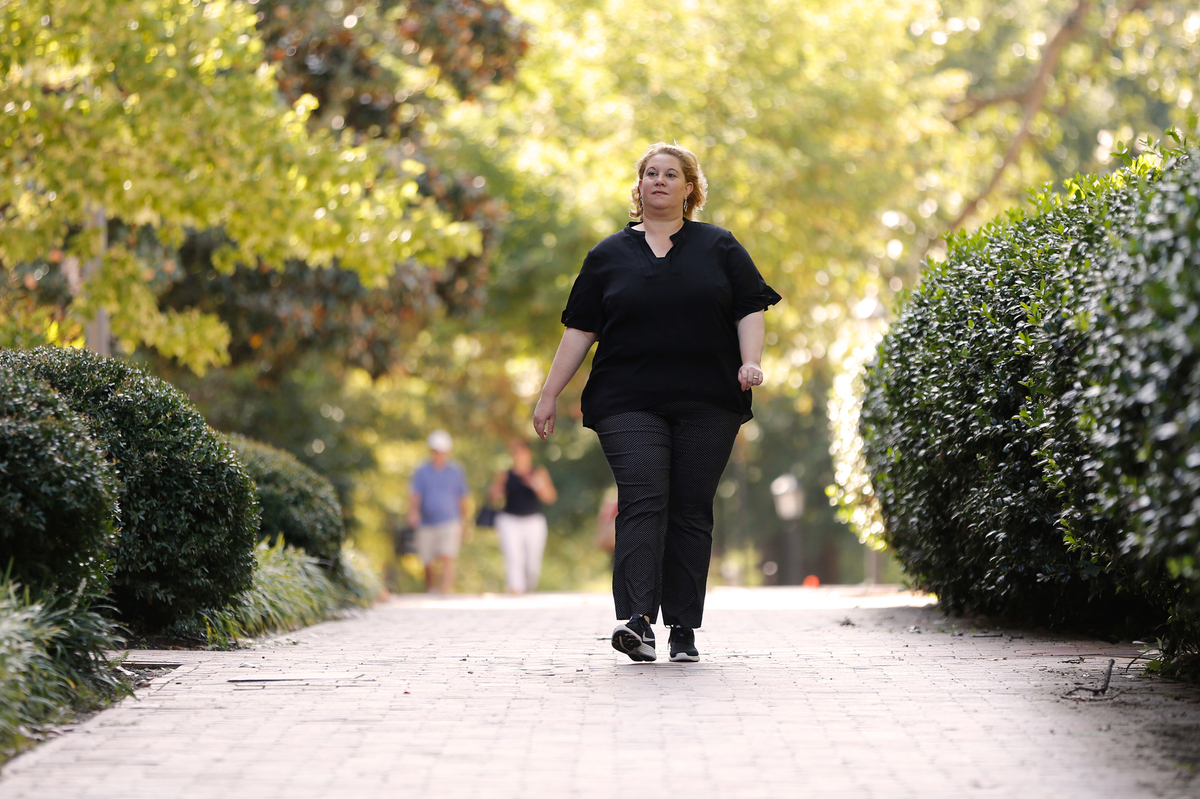 On the advice of a co-worker, Dehne joined a six-week program through which she learned how to safely walk to ease her pain. Now Dehne briskly walks for exercise and enjoyment multiple times a week. Her knees, she says, "don't hurt me anymore."

For starters, building up surrounding muscles helps stabilize the hurting joint and also increases lubrication of the cartilage.

"Movement is essential for nutrition of the cartilage," says Dr. Virginia Byers Kraus, a professor at Duke University's Molecular Physiology Institute who serves on the research and medical committees of the Arthritis Foundation.

"Cartilage doesn't have a blood supply but does have living cells," she explains. "So the way it gets nutrition is by dynamic motion — putting weight off and on as you walk and move. The fluid inside the joint flows into and out of the cartilage like a sponge, so all the nutrients in the joint fluid get into the cartilage" and help slow any degradation there.

Neuroscientist Benedict Kolber with Duquesne University in Pittsburgh says exercise may also cause changes in the brain that can make a big difference in damping down pain.

"Exercise engages the endogenous opioid system," he says, "so our bodies make opioids and use these opioids to decrease pain."

In addition to other mechanisms still being worked out, natural opioids are thought to bind to the same receptors in the brain as opioid painkillers, Kolber says, but without the complications or potential for addiction. "There are some circumstances," he says, "in which your body can produce so much of these natural opioids that you actually get some sense of euphoria" — hence the term runner's high, a phenomenon athletes have long described.

Kolber says exercise also seems to activate parts of the brain that are involved in decreasing pain. "We get pain signals that are coming from our hands to our spinal cord and up to our brain," he says, "and then we get these control systems — parts of our brain that seem to be activated in exercise — and that then turns down the pain system."

Dehne's initial hesitancy to start walking is pretty typical of arthritis patients, according to exercise physiologist Kirsten Ambrose, program manager for the Osteoarthritis Action Alliance at the University of North Carolina.

"Chronic pain is debilitating, and a lot of people don't want to be physically active," Ambrose says, "because they're afraid it will make their pain worse or damage their joints further."

But Ambrose tells patients that gentle physical activity, gradually increased with a health care provider's tailored guidance, will in fact improve their pain, and they need to "think about it as a form of treatment — something they can engage in safely and comfortably."

Ambrose says a number of factors come into play to make that happen, including improvement in the quality of sleep, improvement in mood and a reduction in depression and anxiety. Exercise can "simply boost somebody's self-efficacy, or their belief in their ability to be physically active," she says. And that increased self-confidence can help ease pain too.

Walking for exercise isn't the only such remedy, of course, but it is a simple and accessible form of physical activity. "You just need a pair of shoes and a safe location and off you go!" Ambrose says.

And, she says, most people who try it get some relief. After exercising routinely for a while, their pain diminishes, and they're motivated to keep going.

"People tell us all the time that once they start exercising and experience the benefits, they become very committed to routine exercise," says Marcy O'Koon of the Arthritis Foundation.

Back in his lab, neuroscientist Kolber wanted to know if the length of time spent exercising makes a difference in the amount of relief patients get. Could boosting the exercise level, or "the dose," bring more relief?

"Anyone who develops any drug has to go through hundreds of different tests looking at dose," Kolber says, "but in exercise there's almost no data about dose — especially in the context of pain."

So he recently conducted a small, weeklong study measuring 40 healthy women's sensitivity to pain before and after bouts of exercise, using heat and pressure to elicit pain. The individuals were asked to walk briskly on a treadmill for 30 minutes. Some exercised three times that week, others five or 10 times.

He and his team found there was no difference in pain perception after exercise for those who walked just three times a week. But the findings were very different for the people who exercised five times or more each week.

So if you're going to try walking to ease your pain, don't do it just once or twice and stop, Kolber advises. Shoot for getting out at least five times a week.

"Five minutes is very easy to think about," she says, even for patients in moderate to severe pain. "Small chunks to start with and slowly progressing is the best way to go."

She suggests people consult Walk With Ease, a walking program sponsored by the Arthritis Foundation. It provides resources, offers classes nationwide, provides tips on what to wear and when and how to stretch, among other benefits.

"It is structured, and it gives people very clear guidance on exactly how to start, how to set goals and how to track their progress so they can learn to walk safely and comfortably and reap the benefits for their arthritis symptoms," she says. The idea is to make walking "a habit for life."