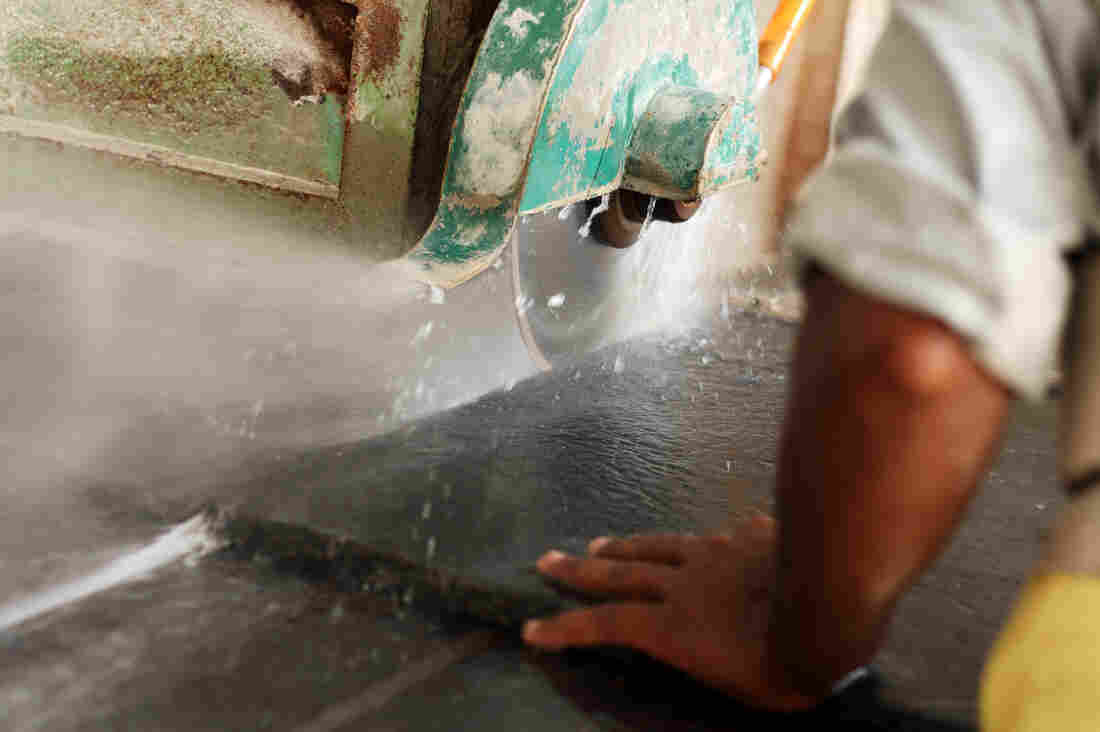 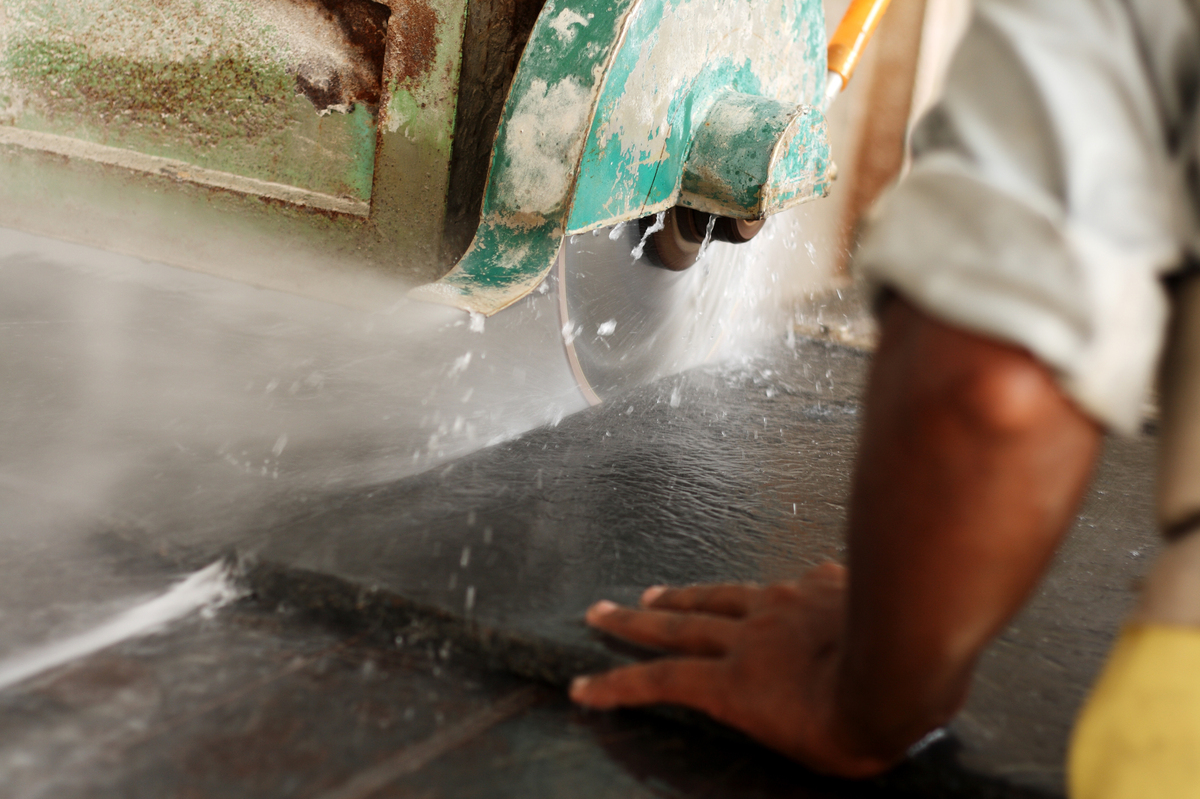 A worker cuts black granite to make a countertop. Though granite, marble and "engineered stone" all can produce harmful silica dust when cut, ground or polished, the artificial stone typically contains much more silica, says a CDC researcher tracking cases of silicosis.

Artificial stone used to make kitchen and bathroom countertops has been linked to cases of death and irreversible lung injury in workers who cut, grind and polish this increasingly popular material.

The fear is that thousands of workers in the United States who create countertops out of what's known as "engineered stone" may be inhaling dangerous amounts of lung-damaging silica dust, because engineered stone is mostly made of the mineral silica.

Jose Martinez, 37, worked for years as a polisher and cutter for a countertop company that sold engineered stone, as well as natural stone like marble. He says dust from cutting the slabs to order was everywhere.

"If you go to the bathroom, it's dust. When we go to take lunch, on the tables, it's dust," he says. "Your nose, your ears, your hair, all your body, your clothes — everything. When you walk out of the shop, you can see your steps on the floor, because of the dust."

Now, he's often weak and dizzy and has pain in his chest. He can no longer play soccer or run around with his kids. Doctors have diagnosed silicosis, a lung disease that can be progressive and has no treatment except for lung transplant. Martinez is scared after hearing that two other workers from the same company, who were also in their 30s, died of silicosis last year.

"When I go to sleep, I think about it every night — that if I'm going to die in three or four, five years?" he says, his voice breaking. "I have four kids, my wife. To be honest with you, every day I feel worse. Nothing is getting better."

His experience is just one of those described in a new report on 18 cases of illness, including two deaths, among people who worked principally with engineered stone in California, Colorado, Texas and Washington.

The workers were nearly all Hispanic, almost all were men, and most had "severe, progressive disease."

"I am concerned that what we may be seeing here may just be the tip of the iceberg," says Dr. Amy Heinzerling, an epidemic intelligence service officer with the Centers for Disease Control and Prevention who is assigned to the California Department of Public Health.

Engineered stone took off as a popular option for countertops about a decade ago and is now one of the most common choices for kitchens and bathrooms. From 2010 to 2018, imports of the material rose about 800%.

Manufacturers say the material is preferable to natural stone because it's less likely to crack or stain. Companies make their engineered stone by embedding bits of quartz in a resin binder, and that means it's almost entirely composed of crystalline silica.

While all this silica isn't a concern once the countertop is installed in a kitchen or bathroom, it is a potential problem for the businesses that cut slabs of this artificial stone to the right shape for customers.

"Workers who cut with the stone can be exposed to much higher levels of silica," says Heinzerling, "and I think we're seeing more and more workers who are working with this material who are being put at risk."

A spokesperson for a trade organization that represents major manufacturers of engineered stone, A.St.A. World-wide, sent NPR a written statement, noting that dust-related diseases can come from unsafe handling of many different materials and that "these risks are not specific to engineered stone."

What's more, the statement goes on, engineered stone surfaces "are totally safe in their fabrication and installation if it is performed according to the recommended practices." Manufacturers, according to the trade group, have been working to educate fabricators about these practices.

Still, Heinzerling believes that "the fact that all of our affected workers worked with engineered stone, as did many of the workers reported internationally, is really important."

One recent study in Australia found that at least 12% of workers who cut stone countertops had silicosis. Those cases, and the new cases in the United States, have public health experts now wondering about the nearly 100,000 U. S. workers in this industry.

We knew we'd see more cases. It's disappointing that OSHA hasn't done anything to stop these cases from occurring. These cases were predictable, and they were preventable.

Officials estimate that there are more than 8,000 stone fabrication businesses in the United States. Many are small-scale operations that might not understand the dangers of silica or how to control it.

Clusters of silicosis cases, some requiring lung transplants, had already occurred among workers who cut engineered stone in Israel, Italy and Spain when doctors saw the first North American case in 2014.

That was a 37-year-old Hispanic man who had worked at a countertop company and had been exposed to dust, including dust from engineered stone, for about a decade.

More cases were then discovered in California when public health workers did a routine search of hospital discharge records for a diagnosis of silicosis. They identified a 38-year-old man who had died of silicosis in 2018 after working for a countertop manufacturer.

When they investigated his former workplace, they learned of another worker who had died of silicosis in 2018 at age 36. Four other workers from that same company, including Martinez, have been diagnosed with silicosis.

Meanwhile, in Colorado, an unusually high number of people with silicosis were showing up at the occupational health practice of Dr. Cecile Rose, professor of medicine at National Jewish Health and the University of Colorado.

"Over a period of less than 18 months, I had seen seven cases of silicosis in younger workers," says Rose.

In the past, her patients with silicosis tended to be miners, who had dug for metals such as gold and silver many years before. Her new patients were younger and were working with companies that processed slabs of engineered and natural stone.

"We actually not only saw people who were directly cutting and grinding the stone, but we saw people who were just sweeping up the work site after the stone had been cut," says Rose. "They were exposed to the silica particles that were suspended in the air just with housekeeping duties."

More cases have been found in Texas. And in 2018, public health workers identified a 38-year old Hispanic man with silicosis in Washington who fabricated countertops. "He is facing serious health issues and is being considered for a lung transplant," according to Washington State Department of Labor & Industries.

Controlling the dust is key

None of this surprises David Michaels, an epidemiologist at George Washington University who used to run the Occupational Safety and Health Administration, a safety agency within the Department of Labor. In 2015, he says, OSHA issued a "hazard alert" warning of a significant exposure risk for workers who manufacture natural and artificial stone countertops.

"We knew we'd see more cases," says Michaels. "It's disappointing that OSHA hasn't done anything to stop these cases from occurring. These cases were predictable, and they were preventable."

Prevention basically comes down to controlling the dust. Stone cutting businesses can choose from a variety of proven methods ranging from working with stone while it's wet to using vacuum or filtration systems that remove dust from the air.

In 2016, OSHA issued new workplace limits on how much silica could be in the air. This controversial new rule reduced the permissible exposure level to half of what it had been. Safety experts hailed the new, tighter limit as an important step forward; the previous regulations had been based on decades-old science, they said. But many industry groups opposed it.

A year later, the incoming Trump administration ended the safety agency's national emphasis program for silica. That program would have allowed OSHA to target the countertop fabrication industry for special inspections, says Michaels.

"That way OSHA can have an impact on the entire industry," says Michaels. "But OSHA is not doing that."

Without that program, says Michaels, OSHA is limited in what it can legally do. OSHA can investigate a workplace injury or a complaint. But these workers, some of whom are undocumented immigrants with few employment options, are unlikely to complain.

A spokesperson for OSHA tells NPR that the agency will determine "at a later date" whether a revised silica special emphasis program is needed; in the meantime, the agency "continues to enforce the 2016 silica standard."

"Employers are responsible for providing a safe and healthy workplace free from recognized hazards," the spokesperson says.

Some countertop manufacturers are well aware of the dangers of silica. David Scott, the owner and operator of Slabworks of Montana, in Bozeman, estimates that about 40% to 50% of what he sells and cuts is the engineered stone.

He has been able to dramatically reduce the amount of silica dust in his countertop fabrication shop over the past five years, he says.

One of his insurers provided testing for airborne silica, and Scott says levels were initially only marginally acceptable, even though his facility doesn't do any dry processing of stone, which creates more dust. "We were a wet shop at that time, and we were still marginal," he says.

Part of the problem was that water with silica dust would end up on the floor, he explains, and some of the water would evaporate before going down the drain.

"If you came in in the morning, you would see a white residue on our floor, and that was the dust," says Scott. "So the first thing we did was bring in a floor scrubber. We call it our Zamboni."

The machine scrubs and vacuums up the water, and Scott says that reduced the silica load in the air substantially. He then added new air handling systems to further remove dust. "We brought our silica levels, at times, down to undetectable," says Scott.

He says consumers who want to make sure they're buying a countertop from a responsible vendor can vet fabricators by looking to see if they are accredited by the Natural Stone Institute, which trains companies on how to safely cut and polish stone. Accreditation requires companies to basically invite OSHA in to do an inspection.

But many operators, especially smaller ones, won't have gone through this process. If a showroom is attached to a manufacturing shop, Scott says, a countertop buyer could simply look around.

"How much dust do you see? Because it gets everywhere," says Scott. "General cleanliness is going to tell you a lot."

Australia sees a spike in cases

In Australia, where government officials are grappling with a spike in aggressive cases of silicosis among workers who cut engineered stone, medical organizations are urging doctors to screen young workers to identify those who have lung disease.

Dr. Graeme Edwards, an occupational health physician in Brisbane, Queensland, says that currently there are more than 250 known cases of silicosis among people who manufacture countertops — or "benchtops," as they are called in Australia.

Anyone who has worked with engineered stone for more than three years should have a high-resolution CT scan to check for lung injury, says Edwards, even if they don't have any symptoms. He says this is especially true if they engaged in any dry-cutting of this material for more than a year, regardless of whether they used respiratory protection.

In an email, he says that American researchers' assertion in their new report that, based on Australia's experience, "there might be many more U. S. cases that have yet to be identified" is "a GROSS understatement."

Jose Martinez, who is worried about his future, says he wants workers to know that the danger is real and that they have to protect themselves, because some companies may not care.