Accessibility links
Acute Flaccid Myelitis May Be Caused By A Virus, Research Shows : Shots - Health News It starts out like a common viral respiratory illness but leads to terrifying symptoms, including paralysis. Could a common virus be behind the illness? 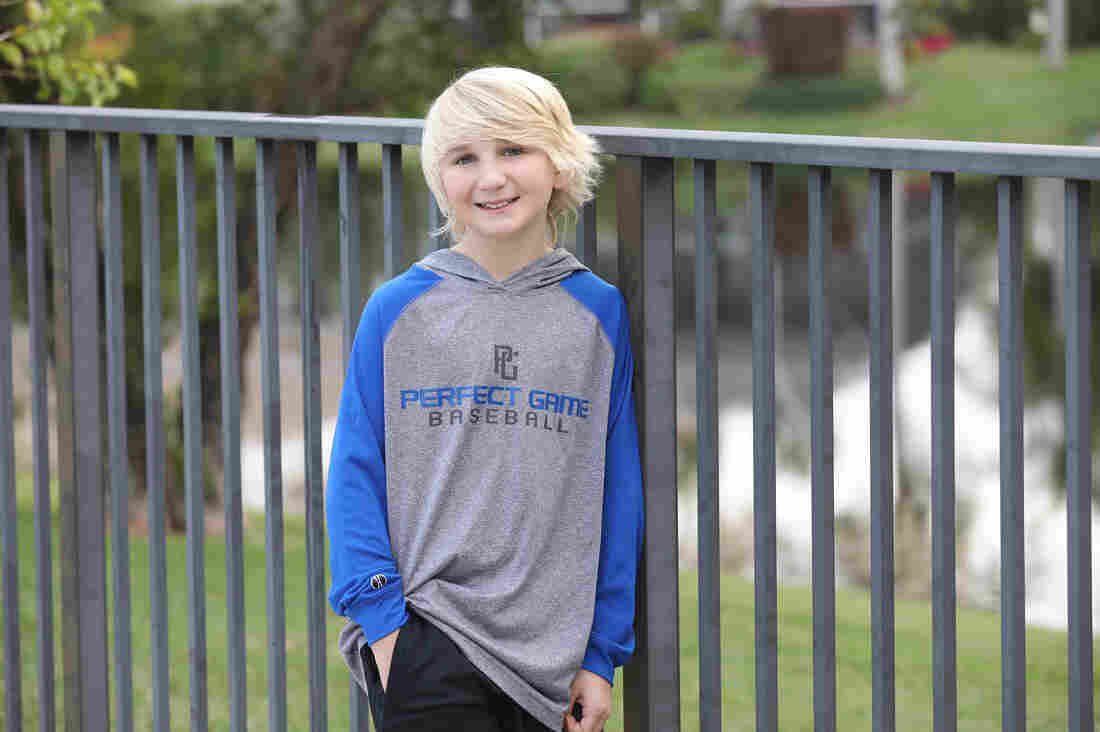 Evan Mazanec came down with AFM when he was 7, in 2014. It started with a fever and an ear infection, and lead to paralysis. He has since made a full recovery — he's back to playing baseball and living a full life. Alex Gort/Gort Productions hide caption 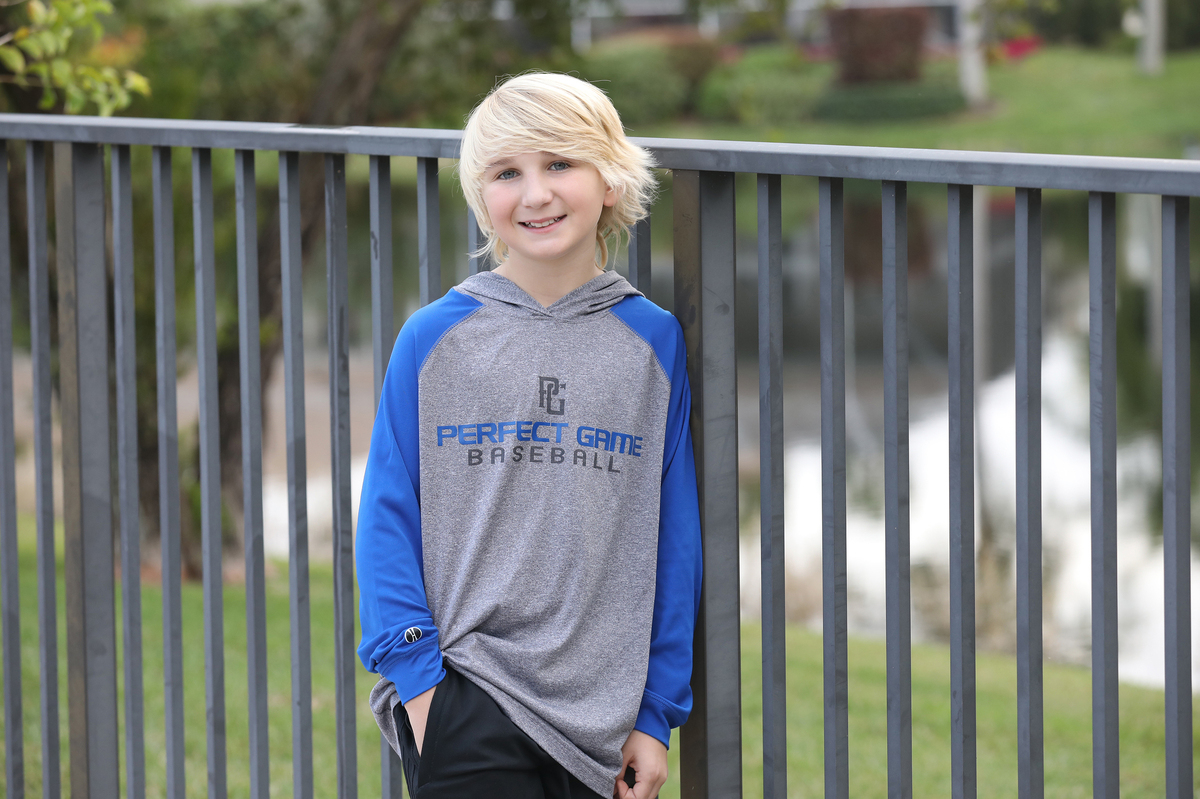 Evan Mazanec came down with AFM when he was 7, in 2014. It started with a fever and an ear infection, and lead to paralysis. He has since made a full recovery — he's back to playing baseball and living a full life.

The condition strikes young children. It can start with run-of-the-mill virus symptoms, like fever or sniffles. But, then the kids lose control of their limbs, may have trouble swallowing or breathing, or even end up paralyzed. This terrifying experience happened to more than 570 families since 2014, whose children were struck with an illness called acute flaccid myelitis, or AFM.

"It was really scary," says Susan Coyne, the mother of a son, Evan Mazanec, who developed AFM back in 2014 when he was 7 years old. "When this first started, no one really knew what it was," she says.

It came on quickly, starting with a fever and an ear infection. Coyne says the limb weakness and paralysis began several days later — just as Evan was getting over the fever. He lost control of his arms and legs. "He couldn't move them, he couldn't lift them, he couldn't walk," Coyne says.

He spent a year and a half in intensive rehab. He had to learn to walk and move his arms again. "It set him back years," Coyne says.

Scientists have struggled to understand what causes this rare childhood disease. Now, one theory is gaining ground. A paper published Monday in the journal Pediatrics finds the condition may be triggered by a virus.

The disease follows a pattern: Scientists have documented outbreaks every other year, beginning in 2014, and again in 2016 and 2018. Last year, there were 233 cases in the U.S. It strikes young kids, average age of 6. And, it can lead to long-term paralysis.

Researchers are focused on a particular virus, enterovirus D68. Using surveillance data the researchers estimated the prevalence of the virus. And the data suggests that during years when there's a lot of EV-D68 circulating in the U.S., there are also more cases of acute flaccid myelitis.

"We're seeing this trend in EV-D68, that mimics the trend in AFM," says Dr. Janell Routh from the CDC's division of viral diseases and one of the authors of the paper.

In addition, lab results from the patients diagnosed with AFM also confirm the link with the virus. "We see a large proportion of respiratory specimens are positive for enterovirus, and about half of those that are positive are positive for EV-D68," Routh explains.

So far, this year appears to be an "off" year for AFM; there are just 20 cases reported to date. The CDC has a workgroup researching the causes of the illness. "We know AFM can be caused by different things," Routh says. And there may be other viruses involved, too.

There's still a lot to learn about the disease. For instance, enteroviruses, including EV-D68, are fairly common. "They're around all the time and they cause lots of viral illnesses," Routh says. It's not clear why a few hundred kids — out of the many more exposed — would go on to develop acute flaccid myelitis. Or, even within the same family, the virus may sicken more than one sibling, but only one may develop AFM. Routh says they're trying to nail down the other risk factors that may explain why some kids go on to develop the condition after a virus.

Nevertheless, an editorial published alongside the new paper concludes that this study "adds an important signal... that further supports enterovirus-D68 as the most likely driver of recent AFM outbreaks in the United States." And the authors point out that EV-D68 circulation has also been correlated with AFM outbreaks in Asia, Europe, and South America.

Eventually, Routh says the hope would be to develop medicines or a vaccine against the condition. Some researchers say the recent insights into the connection between EV-D68 and acute flaccid myelitis is reminiscent of the polio story. The polio vaccine, one of the oldest vaccines, is actually a vaccine against another type of enterovirus.

"The EV-D68 storyline shows many similarities with poliovirus a century ago, stimulating discussion whether EV-D68 could be ascertaining itself as the "new polio," write a group of scientists who published a paper in the journal Frontiers in Microbiology.

Enteroviruses tend to be prevalent in early fall. And, as with all infectious diseases, practices such as hand-washing, can help people fend off viruses, including EV-D68.

This does not appear to be an outbreak year, but Routh says parents should be aware of the symptoms, if their child comes down with a viral illness. "So if they notice limb weakness in their child or [a] facial droop, or difficulty speaking or swallowing, it's very important that they see their physician right away," Routh says.

Susan Coyne's son Evan has made a full recovery — he's back to playing baseball and living a full life. But there's a wide spectrum. Some kids with AFM are in wheelchairs — and remain paralyzed.

There are new treatments being investigated and some families are seeing success with nerve transfers that help patients regain movement.