Accessibility links
Vaping Illness Put Her In The ICU: Now She's Raising Awareness Of The Risks : Shots - Health News On her way to start her freshman year of college, Piper Johnson landed in the emergency room because of vaping. She wants other young people to know how bad it can be. 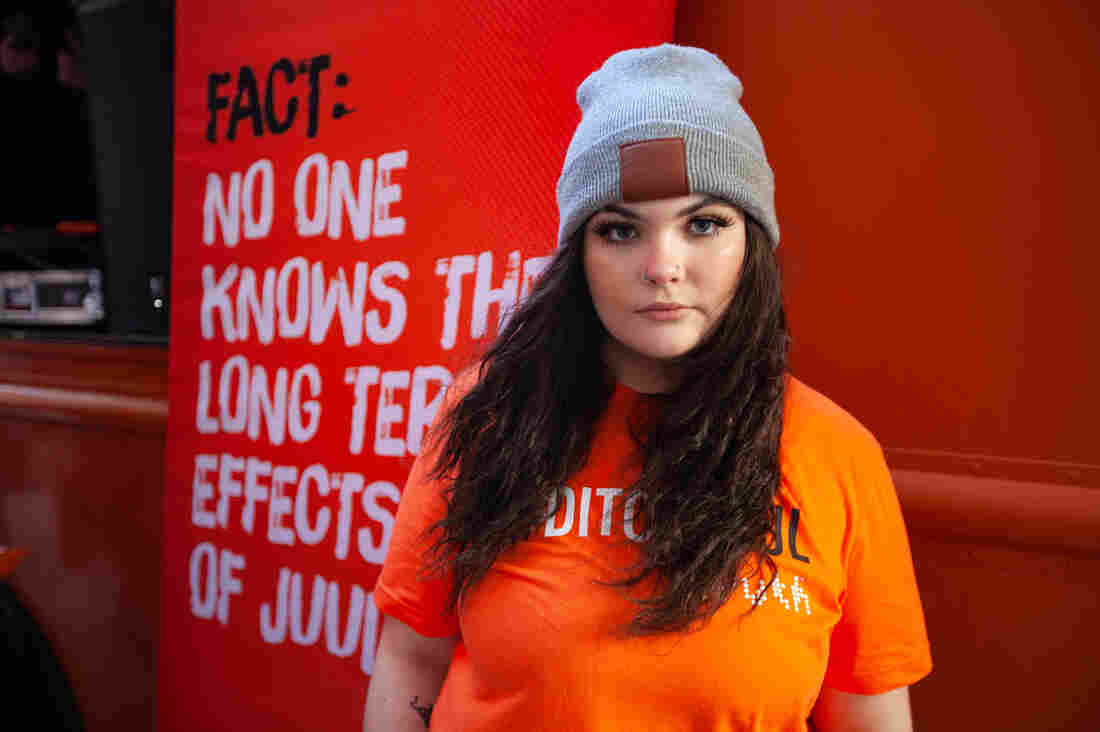 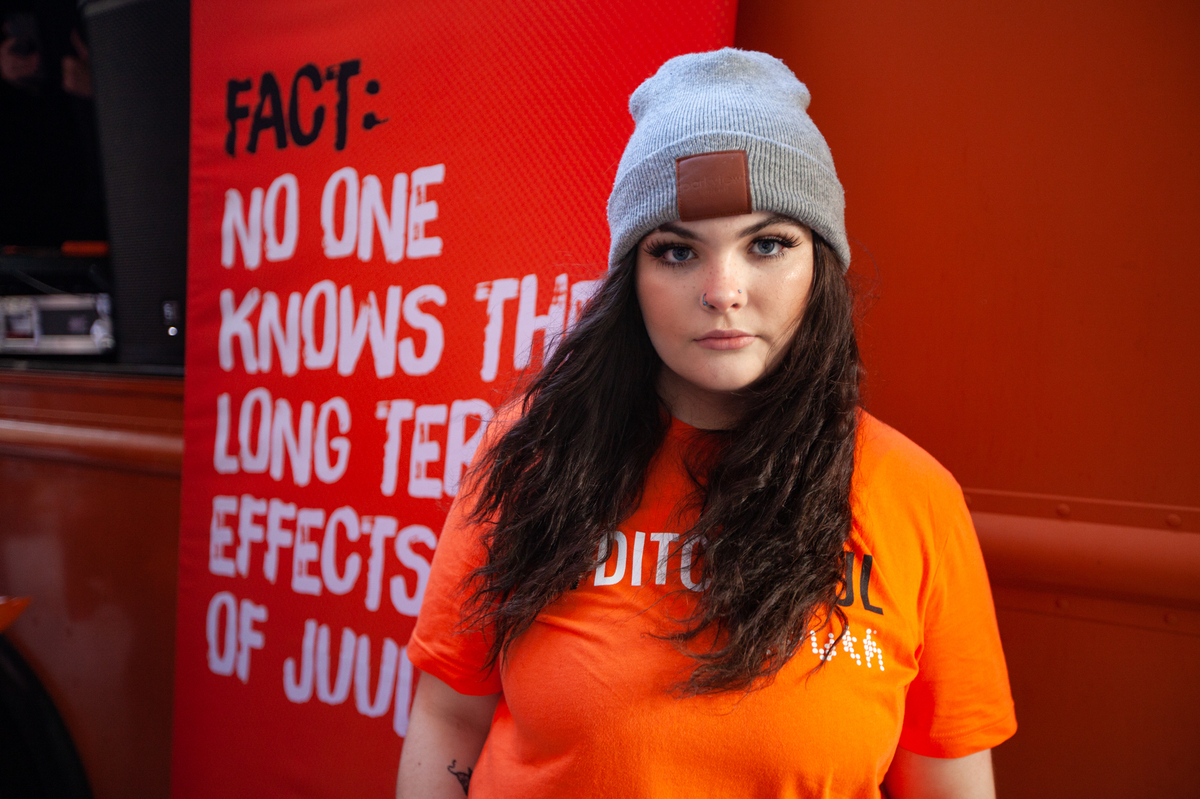 Piper Johnson used to vape regularly in high school. After surviving vaping-related lung illness, she's now working to raise awareness of the risks of the habit.

Piper Johnson was all packed and ready to drive across country with her mom to start college when the 18-year-old noticed a pain in her chest. She took an Advil and hoped the pain would go away.

It didn't. During the drive from her hometown of New Lenox, Ill., near Chicago, to the University of Northern Colorado in Greeley, Colo., she realized something was very wrong. "I kept feeling worse and worse," Johnson says. She developed a high fever, felt extremely lethargic, and noticed a rapid heart beat.

In Greeley, she went to the emergency room. Doctors gave her steroids and antibiotics. They did an X-ray and detected fluid in her lungs, she recalls. They told her that she had a type of pneumonia.

When her oxygen levels dropped, she was moved to the ICU. "I was terrified," Johnson recalls. "I was laying in my bed sobbing because it hurt so bad to breathe," she says. She stayed in the hospital seven days.

Piper Johnson is one of the more than 1,000 people diagnosed with vaping-related lung disease this year. The first cases were reported this spring, and the outbreak continues to grow.

The cause of the outbreak is still not clear. The majority of patients acknowledged vaping THC, and many used a type of counterfeit vapes called Dank Vapes. But, this outbreak has also called attention to the wider epidemic of teens vaping nicotine.

Johnson has now joined a group of young activists who are working to raise awareness of the risks of vaping, and to pressure the industry and the government to do more to keep kids safe.

Johnson and dozens of other young people demonstrated outside Juul's office in Washington, DC., Wednesday, as part of a day of action organized by the non-profit group, Truth Initiative. Similar rallies took place around the country.

NPR reached out to Juul for comment about the rally, but did not get a reply as of the time of publication. In August, Juul announced new measures to combat underage vaping, including working with online retailers to enforce strict age-verification policies. The company banned online sales to people under 21 back in 2017, but youth vaping has continued to rise dramatically.

Johnson says she first tried vaping during her sophomore year of high school. By senior year, she was hooked.

"I was vaping Juul brand, off-brand pods, some disposable vapes," Johnson recalls. Some weeks, she'd go through two to three Juul pods a week. (Each pod contains about 20 cigarettes' worth of nicotine — that's a pack). "It's highly addictive," she says. 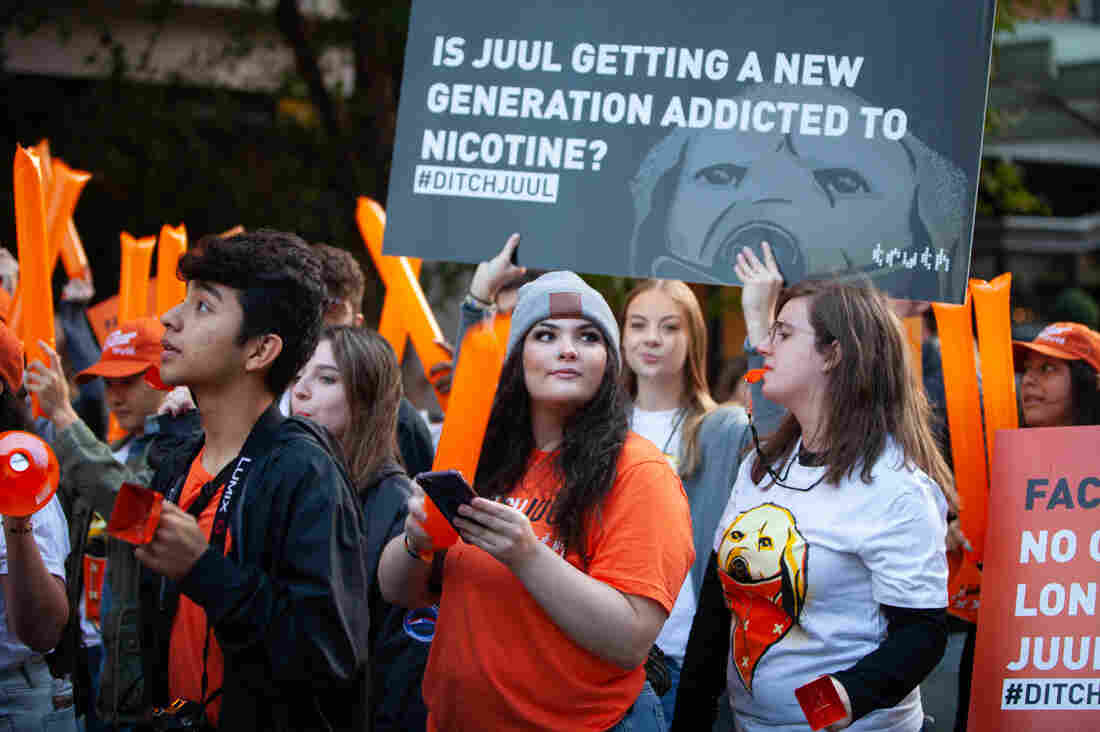 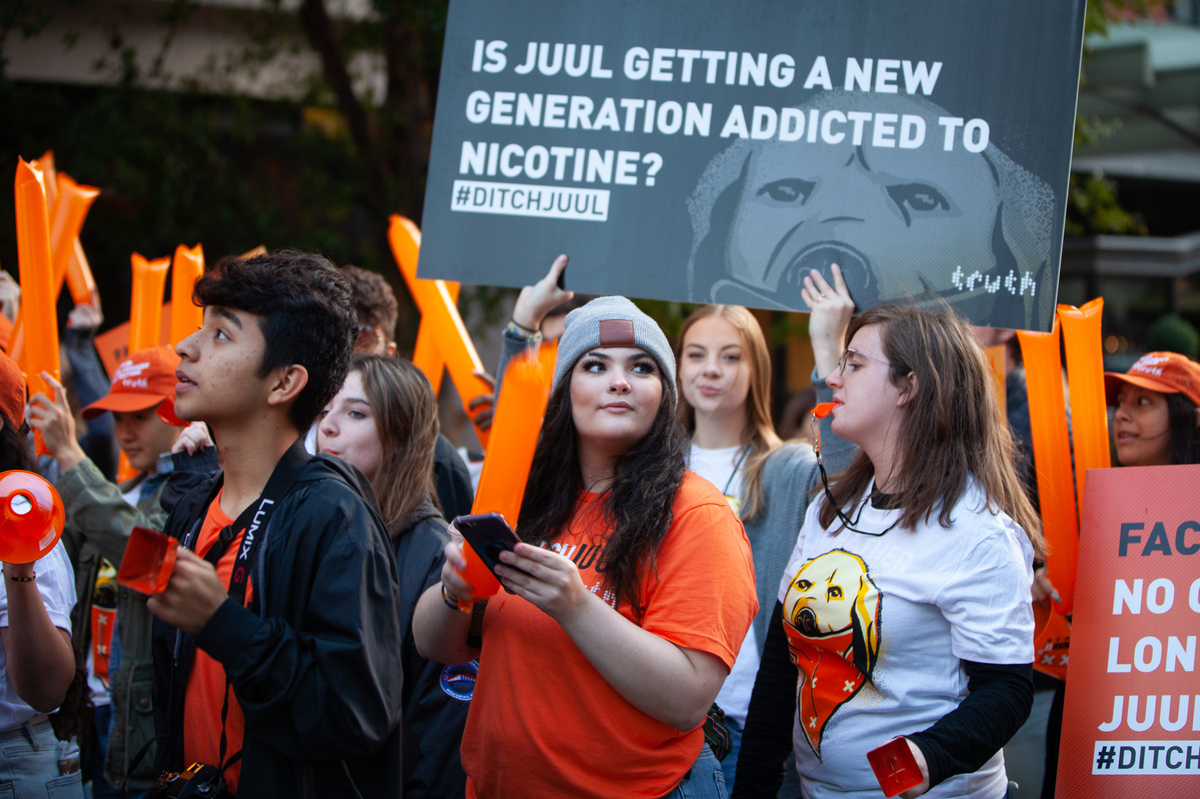 Piper Johnson and a group of other young activists and former vapers marched Wednesday morning to Juul's Washington, D.C., offices on F Street.

By the end of high school, she was also vaping THC occasionally. She says most of her peers were vaping, too. "We were all convinced it was safe," Johnson says. "It's so common and widespread, it's ridiculous."

But, then Johnson got sick.

Though she is feeling better now, she says she's still not back to 100 percent. And it's unknown if there may be long-term repercussions of the illness.

For Johnson, getting sick was a wake-up call. Not only has she stopped vaping, she can't believe she ever got hooked. And she wants to help other people quit too. "It makes me mad," Johnson says, that so many teens are vaping.

She says when she hears about vape cartridges from the street "getting into kids' hands" she realizes there's a lot of work to do to raise awareness about the risks of vaping.

"It's super dangerous," she says. She'd like to see tighter regulations of vaping products. "That's why I'm trying to fight this,"

Johnson says she thinks the habit is completely inconsistent with her generation's approach to healthy living.

"We're really the generation of, like, vegetarians, organic foods, mental-health days and self-care- days, " Johnson says. But when it comes to vaping, she says, "we're pumping our bodies full of chemical without even knowing what it does to us."

The group's "Tested on Humans" campaign, calls out manufacturers, including Juul, for using humans "to test their products in real time," according to the group's press release. Truth Initiative points out that no one knows the long or short-term health effects of e-cigarettes.

"People fail to realize that you're deeply endangering yourself by doing this stuff," Johnson says.