Accessibility links
What's At Stake In The Current Court Challenge To Affordable Care Act? : Shots - Health News The health law again faces possible legal evisceration with a court ruling in Texas v. Azar anticipated this fall. Here's what it's about and what's stake.

Heads Up: A Ruling On The Latest Challenge To The Affordable Care Act Is Coming

Heads Up: A Ruling On The Latest Challenge To The Affordable Care Act Is Coming 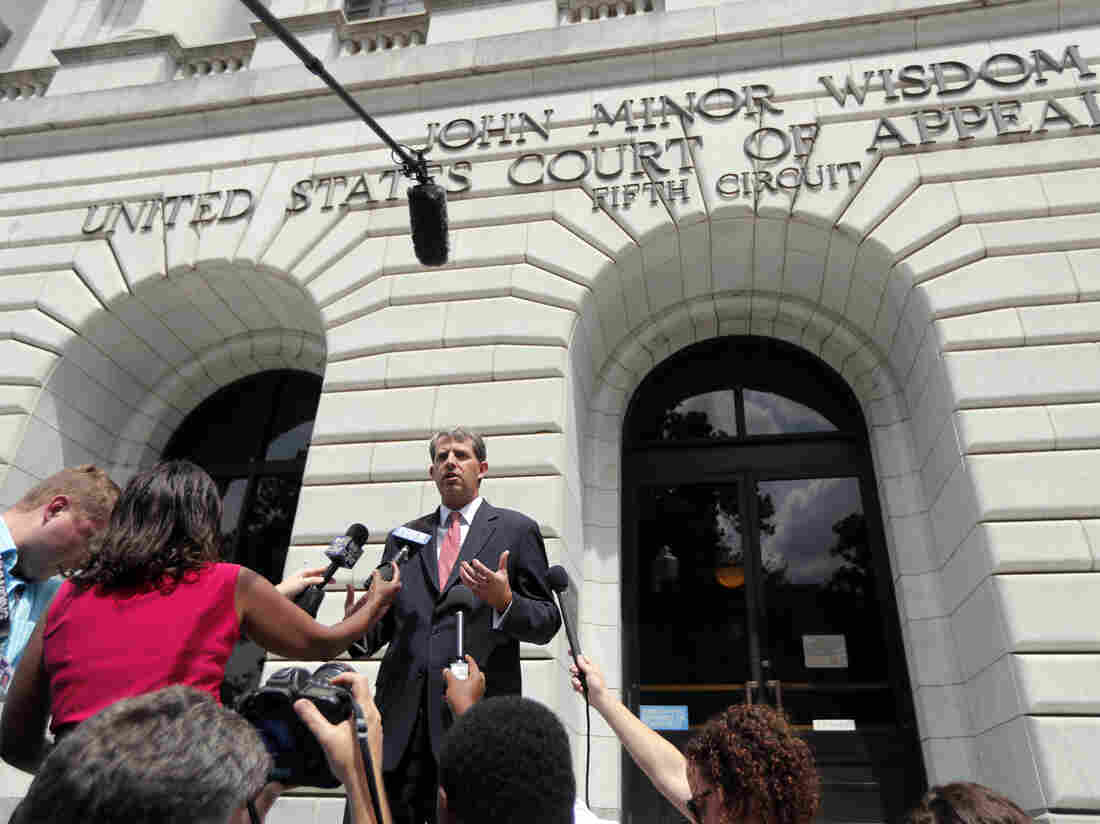 The latest challenge to the Affordable Care Act, Texas v. Azar, was argued in July in the 5th Circuit Court of Appeals. Attorney Robert Henneke, representing the plaintiffs, spoke outside the courthouse on July 9. Gerald Herbert/AP hide caption 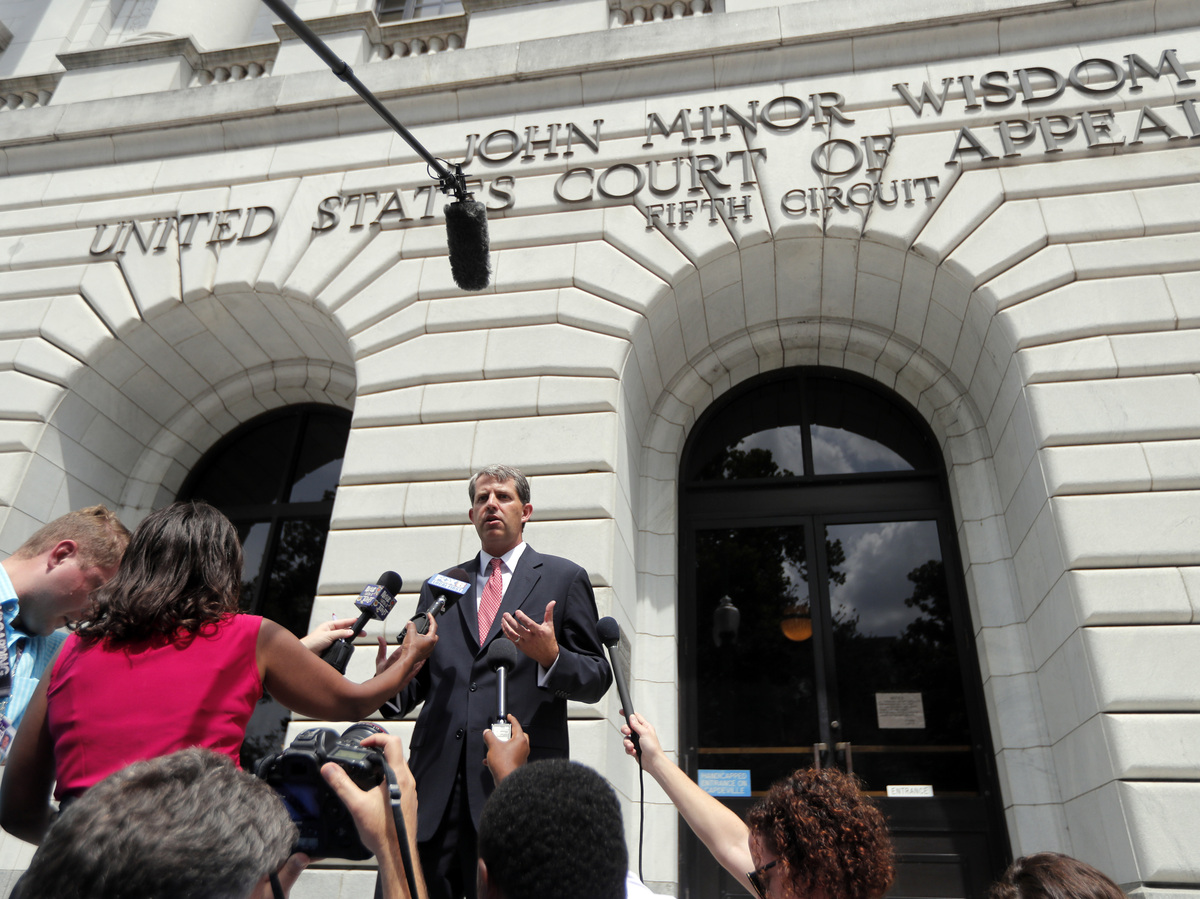 The latest challenge to the Affordable Care Act, Texas v. Azar, was argued in July in the 5th Circuit Court of Appeals. Attorney Robert Henneke, representing the plaintiffs, spoke outside the courthouse on July 9.

A decision in the latest court case to threaten the future of the Affordable Care Act could come as soon as this month. The ruling will come from the panel of judges in the 5th Circuit Court of Appeals, which heard oral arguments in the Texas v. Azar lawsuit.

An estimated 24 million people get their health coverage through programs created under the law, which has faced countless court challenges since it passed.

In court in July, only two of the three judges — both appointed by Republican presidents — asked questions. "Oral argument in front of the circuit went about as badly for the defenders of the Affordable Care Act as it could have gone," says Nicholas Bagley, a professor of law at the University of Michigan. "To the extent that oral argument offers an insight into how judges are thinking about the case, I think we should be prepared for the worst — the invalidation of all or a significant part of the Affordable Care Act."

Important caveat: Regardless of this ruling, the Affordable Care Act is still the law of the land. Whatever the 5th Circuit rules, it will be a long time before anything actually changes. Still, the timing of the ruling matters, says Sabrina Corlette, director of the Center on Health Insurance Reforms at Georgetown University.

"If that decision comes out before or during open enrollment, it could lead to a lot of consumer confusion about the security of their coverage and may actually discourage people from enrolling, which I think would be a bad thing," she says.

Don't be confused. Open enrollment begins Nov. 1 and runs at least through Dec. 15, and the insurance marketplaces set up by the law aren't going anywhere anytime soon.

That's not to underplay the stakes here. Down the line, sometime next year, if the Supreme Court ends up taking the case and ruling the ACA unconstitutional, "the chaos that would ensue is almost possible impossible to wrap your brain around," Corlette says. "The marketplaces would just simply disappear and millions of people would become uninsured overnight, probably leaving hospitals and doctors with millions and millions of dollars in unpaid medical bills. Medicaid expansion would disappear overnight.

"I don't see any sector of our health care economy being untouched or unaffected," she adds.

So what is this case that — yet again — threatens the Affordable Care Act's very existence?

A quick refresher: When the Republican-led Congress passed the Tax Cuts and Jobs Act in 2017, it zeroed out the Affordable Care Act's penalty for people who did not have health insurance. That penalty was a key part of the Supreme Court's decision to uphold the law in 2012, so after the change to the penalty, the ACA's opponents decided to challenge it anew.

The basic argument made by the state of Texas and the other plaintiffs? The zero dollar fine now outlined in the ACA is a "naked, penalty-free command to buy insurance," says Bagley.

Here's how the argument goes, as Bagley explains it: "We know from the Supreme Court's first decision on the individual mandate case that Congress doesn't have the power to adopt a freestanding mandate, it just has the power to impose a tax." So therefore, the argument is that "the naked mandate that remains in the Affordable Care Act must be unconstitutional."

The case made by the plaintiffs goes further, asserting that because the individual mandate was described by the Congress that enacted it as essential to the functioning of the law, this unconstitutional command cannot be cut off from the rest of the law. If the zero dollar penalty is unconstitutional, the whole law must fall.

Last December, a federal judge in Texas agreed with that entire argument. His judgement was appealed to the panel of judges in the 5th Circuit. Even if those judges agree that the whole law is unconstitutional, that would not be the end of the story — the case will almost certainly end up before the Supreme Court. It would be the third case to challenge the Affordable Care Act in the nation's highest court.

So if the ruling will be appealed anyway, does it matter? "It matters for at least two reasons," Bagley says. "First of all, if the 5th Circuit rejects the lower court holding and decides that the whole law is, in fact, perfectly constitutional, I think there's a good chance the Supreme Court would sit this one out."

On the other hand, if the 5th Circuit invalidates the law, it almost certainly will go the Supreme Court, "which will take a fresh look at the legal question," he says. Even if the Supreme Court ultimately decides whether the ACA stands, "you never want to discount the role that lower court decisions can play over the lifespan of a case," Bagley says.

The law has been dogged by legal challenges and repeal attempts from the very beginning, and experts have warned many times about the dire consequences of the law suddenly going away. Nine years in, "the Affordable Care Act is now part of the plumbing of our nation's health care system," Bagley says. "Ripping it out would cause untold damage and would create a whole lot of uncertainty."