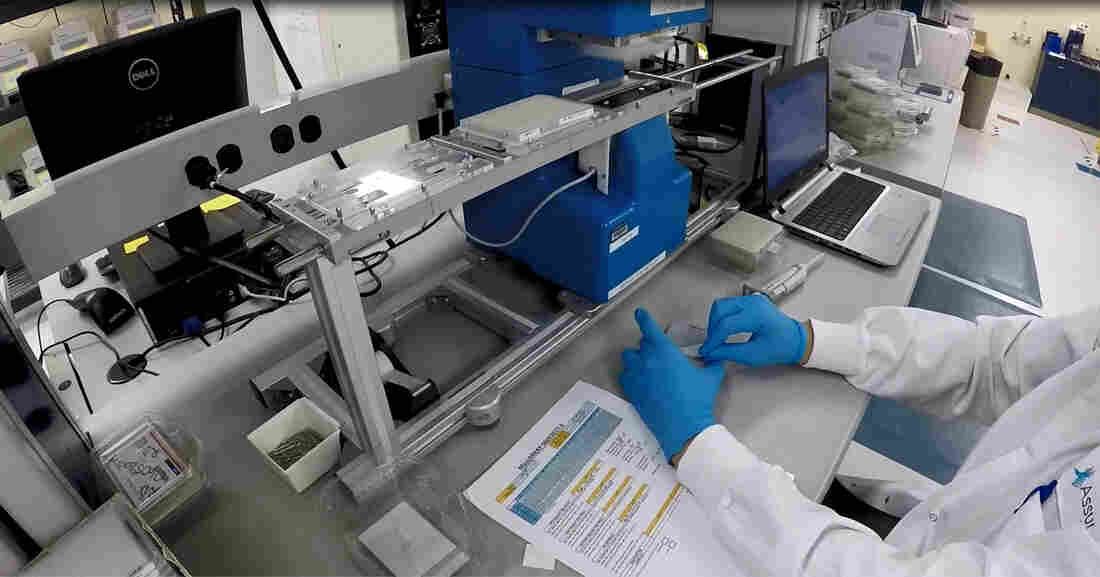 Myriad Genetics is among a handful of companies that make a genetic test to help doctors choose psychiatric medicines for patients. Evidence that the tests are effective has been called "inconclusive." Myriad Genetics hide caption 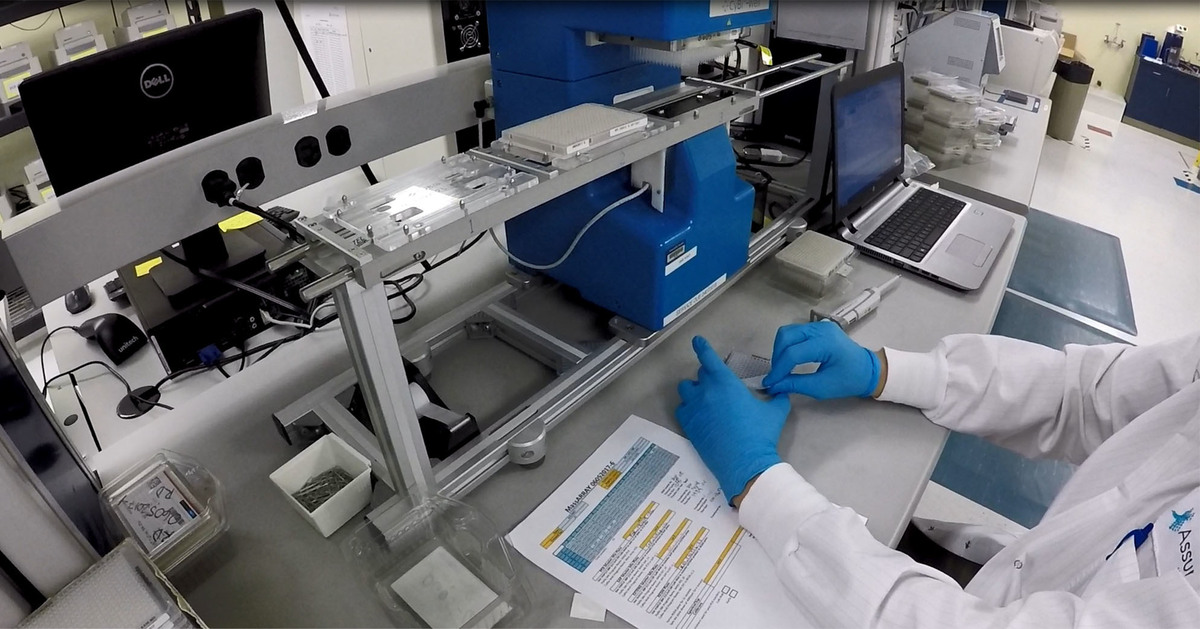 Myriad Genetics is among a handful of companies that make a genetic test to help doctors choose psychiatric medicines for patients. Evidence that the tests are effective has been called "inconclusive."

As a teenager, Katie Gruman was prescribed one mental health drug after another. None seemed to help her manage symptoms of anxiety and bipolar disorder, so she self-medicated with alcohol and illicit drugs.

It would take five years, and trying more than 15 different medications, before she found meds that actually helped.

Now 28 and in recovery, Gruman has been on the same drugs for years. But when a clinician recommended a genetic test to see which drugs work best for her, she took it.

Reading the test results "was definitely vindicating," she says. Medications that hadn't worked for her as a teenager were the same ones the results marked as bad fits.

She says she wishes she had taken the test as a teenager. "I could have avoided a lot of disaster in my life," she says.

Psychiatric medications are known to be hard to match to symptoms, and many patients like Gruman live through years of trial and error with their doctors.

Companies that make genetic tests like the one Gruman used say they can save patients and doctors from prolonged searching for the right medication and save insurance companies from paying for ineffective drugs. But many researchers say the tests don't have enough evidence backing them up. The Food and Drug Administration has warned that the tests could potentially steer patients towards the wrong medications. Nonetheless, UnitedHealthcare, the nation's largest insurer, began covering them October 1 for its 27 million individual and group plans.

Test makers hailed the announcement of United's coverage, the first from an insurance company to apply to all of its commercial plans across the country.

"We expect this to be a tipping point," says Shawn Patrick O'Brien, CEO of Genomind, a company that makes one of the tests. Other insurers will cover the tests "because they don't want to be uncompetitive in the marketplace," he predicts.

If the prediction is correct, it would likely fuel a market that has seen its largest test maker, Myriad Genetics, sell about 375,000 of its psychiatric medicine tests in the 2019 fiscal year, according to Jack Meehan, an industry analyst for Barclays. Myriad reported that it sold $113 million worth of the tests.

In addition to UnitedHealthcare's coverage, Myriad Genetics' test is covered by Medicare, a regional Blue Cross Blue Shield affiliate, and the insurance network for the grocery chain Kroger, a spokesperson says.

As the field of genetic testing to help diagnose and treat disease grows, medicine has embraced certain tests, such as that for the BRCA gene linked to breast cancer. But many researchers say there is not enough evidence tying genetic variants to better outcomes for most psychiatric medications.

James Potash, the head of psychiatry at Johns Hopkins Medicine and an expert on psychiatric genetics, says of all the tests claiming to improve depression treatment, GeneSight's has the most proof. That isn't saying much, though.

"I wouldn't say there's no evidence that it works," he says. "It's just the evidence at this point is still weak."

The idea behind the tests is that in some cases, people can have different reactions to the same drug, even at the same dose, because they have different gene variants. Which variant a person has can affect how quickly or slowly a medicine moves through their body.

This link between genes and drug metabolism has been known for decades, says Francis McMahon, who leads genetic research into mood and anxiety disorders at the National Institutes for Mental Health.

Usually, the longer it takes your body to process a drug, the easier it is for that medication to have an effect. But in psychiatry, McMahon says, how fast someone processes a drug, or metabolizes it, and how well they respond to the drug "are sometimes not strongly related."

This skepticism is shared by some insurance companies. "Anthem considers these tests investigational and not medically necessary," says a spokesman for the carrier, which covers 41 million people. The Blue Cross Blue Shield Federal Employee Program, which covers about two-thirds of government workers and their families, said "there is not enough evidence at this time to determine the effect of genetic testing on health outcomes," according to a spokeswoman.

Test makers are also facing FDA objections that they haven't proven some of the claims underpinning genetic tests for medications, including that antidepressants work better with some gene variants.

"Changing drug treatment based on the results from such a genetic test could lead to inappropriate treatment decisions and potentially serious health consequences for the patient," the agency warned in late 2018. It told companies to stop naming specific drugs, in marketing materials or test results, for which its tests "claim to predict a patient's response" without "scientific or clinical evidence to support this use."

Most test makers complied. One, Inova Genomics Laboratory, stopped selling a range of tests, including its test for mental health disorders, after the FDA followed up with a warning letter in April.

Several mental health advocacy groups, including the National Alliance on Mental Illness, have sided with test makers in their dispute with the FDA. Keeping the names and types of medication off of genetic test reports, as the FDA has required, will "impede the ability of psychiatrists and other front-line health care professionals to personalize medication decisions" for patients with depression, the groups wrote the FDA in September.

"It would be redundant to have dual regulation by both the FDA and CMS," says Pratt.

Research into the tests' efficacy is ongoing and continues to be debated.

Myriad hoped to bolster evidence for its test, GeneSight, in a study it funded that was published this year in the Journal of Psychiatric Research, but the results were mixed.

In the study, doctors used genetic tests to help prescribe medications for one group of patients with depression, while another group of patients received usual care. There was overall no difference between the groups in the study's primary measure of symptom improvement, though some patients showed improved response and remission rates.

Responding to criticisms of its clinical trial results, Myriad Genetics spokesman Ron Rogers says the trial population — whose average participant had tried more than three unsuccessful medications for depression — was uniquely difficult to treat. He says he expects to see stronger outcomes in a forthcoming review of the trial data.

In a statement on the use of genetic testing in psychiatry, the International Society of Psychiatric Genetics, calls the existing evidence "inconclusive," and notes that if 12 patients take such a test for antidepressants, just one will benefit from it.

A low rate of success means insurers will have to pay for a lot of tests for one useful result, says Barclays analyst Meehan. Meehan pointed to a letter about the recent GeneSight study that was published in the same journal, which found that 20 patients would need to take the test for one to recover as a result. At $2,000 for a GeneSight test, the authors wrote, that means patients and insurers would have to cover $40,000 worth of tests. (While competitor Genomind does not share pricing information, a spokeswoman confirmed that it has an active contract with the Department of Veterans to supply tests for $1,886.)

Still some clinicians value the tests. Skeptics often misunderstand how the tests should be used, argues Daniel Mueller, a professor at the University of Toronto who researches how genes and drugs interact. (Mueller is involved in research comparing Myriad's GeneSight to another test developed by a University of Toronto-affiliated hospital.) Most of the time, he says, doctors who order the test already plan to prescribe medication. The test is just another tool to help them decide which one to prescribe.

"It's not an alternative intervention," Mueller says. "It's additional information." He orders the test for most patients who do not respond to at least one antidepressant.

"If you think about the cost of depression and weeks of suffering that you can potentially avoid for some patients," Mueller says, he thinks anyone who can afford a test should take it. (Myriad says 95% of patients pay less than $330 for their test, the cost remaining after insurance and possible financial assistance; Genomind says most privately insured customers pay no more than $325.)

A lack of watertight evidence for the tests should not stop doctors from using it to inform their choice of medication, says Reyna Taylor, who leads public policy for the National Council for Behavioral Health, one of the advocacy groups that defended the tests in a letter to the FDA. "You use the science that you currently have," she says.

"Whether our providers choose to use [a genetic test] or not, we want them to have that choice," she adds.

Disagreement among experts hasn't dissuaded UnitedHealthcare from paying for the tests.

In a statement, UnitedHealthcare spokeswoman Tracey Lempner says they "frequently review our coverage policies to ensure they reflect the most current published evidence-based medicine and specialty society recommendations."

Graison Dangor is a journalist in Brooklyn.