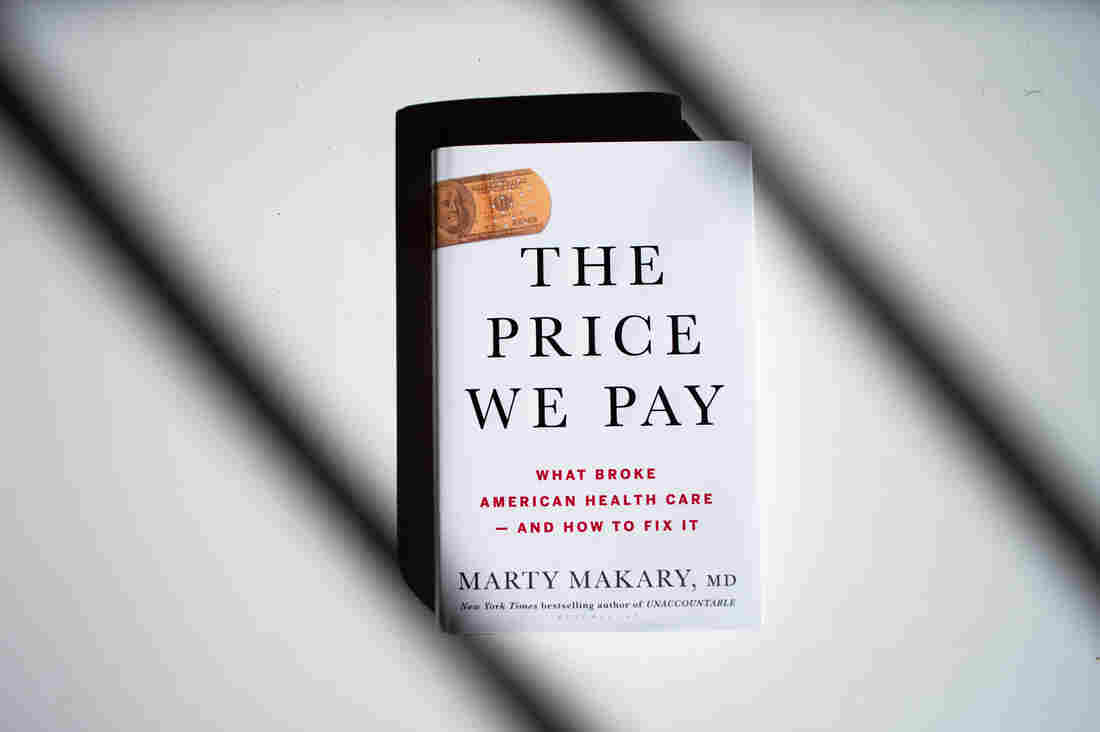 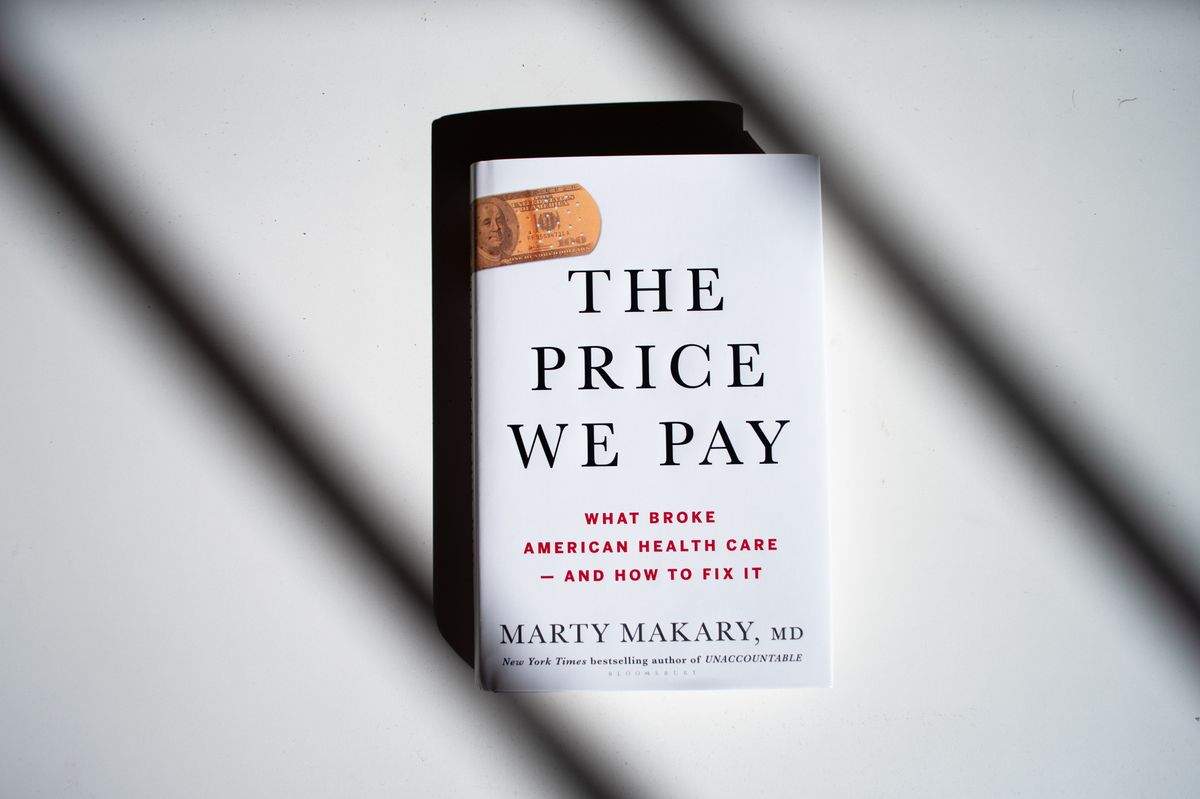 In The Price We Pay, published this fall, author Marty Makary shows how rising costs are eroding trust in medicine.

Americans are losing trust in their doctors, says Dr. Marty Makary in his new book, The Price We Pay: What Broke American Health Care — and How to Fix It. The reason, he argues, is that medical care is just too expensive.

A surgeon and professor at Johns Hopkins University, Makary says that hospitals' predatory financial practices — such as hospitals that sue their patients for unpaid bills or hit patients with surprise bills for tens of thousands of dollars — are a major threat to the doctor-patient relationship.

Makary points to a 2014 poll in which only 23% of Americans surveyed said they had a great deal of confidence in the health care system. The expensive, unpredictable bills, he says, are to blame.

"When you shed your coat and talk to people about their experiences with the health care system, it was clear to me that the modern-day money games of price gouging and predatory billing now threaten the great public trust in the medical profession," Makary says.

When Hospitals Sue For Unpaid Bills, It Can Be 'Ruinous' For Patients

Most of his research focuses on health care economics and waste in the health care system. He and his team spend most of their days poring over data sets and survey results. But for his new book, he wanted to get away from the ivory tower. He traveled the country talking to people about how the costs of medical care affected their lives. What he saw and heard alarmed him.

NPR recently spoke with Makary about his book.

What got you interested in researching the costs of care?

I have friends who ask me at work, where people are doing amazing research on cancer therapies, "Marty, why are you working on this stuff around pricing and the way we finance health care in America?" And I respond by telling them, "We can develop the cure for cancer or ensure our operations are at incredible, state-of-the-art levels. But if people don't trust us, these cures are no good."

So I became interested in the delivery of care, not just in the discovery of care. I could see the fragmentation in the system.

You write about how you visited people in 22 cities across the country to learn how they're affected by the high costs of health care. What kind of stories did you hear? 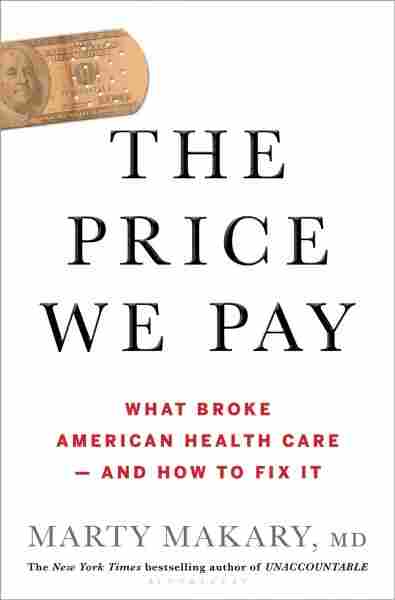 The Price We Pay

What Broke American Health Care and How to Fix It

There are things I learned that I could have never learned from the medical conference circuit that I attend or from my vantage point at Hopkins. That circuit does not give me the vantage point of Steph, a waitress [I met] in Carlsbad, N.M., who's had her paycheck garnished from going to the emergency room for morning sickness seven years ago. She now has a second waitressing job, as a single mom of three kids.

I could never appreciate without getting on the ground the contrast between Steph's life in the desert of New Mexico, in this small town, and the corporate headquarters of that hospital [that sued her] in Franklin, Tenn. — one of the most lush, beautiful towns in America.

As I traveled around the country talking to people, I started to hear stories from individuals — that they would be treated horribly by collectors and even law firms if they could not pay the full sticker price. [I met] one woman who had an egregious bill for which she was sued and had her wages garnished. And the bill was related to a hospital-acquired infection. I thought, "This represents everything wrong with health care."

I spent time with her in her home. Turns out she has two kids with special needs — she's got four kids total. And the way she was treated violated the public trust in the medical profession. In my opinion, a hospital has no right to sue you and garnish your wages or put a lien on your home. This is taking advantage of people when they're vulnerable.

How do hospitals get away with this? Why isn't health care pricing more transparent?

If airlines billed you after the flight, there would be price gouging all over the place. There would be tremendous waste in the marketplace, and it would generate a lot of profits for a small group of companies. And yet in health care, that's exactly what we have now. Airlines could argue they can't give us a price [in advance] because they don't know if there's going to be a delay or a cancellation, or you might consume a beverage. But airlines have built in the predicted risk into their prices, and showing prices have kept markets competitive and stabilized markets.

In health care, we have unstable markets. These costs are taking a heavy toll on individuals who did nothing wrong. They have full-time jobs and health insurance, but they're bearing the brunt of the money games.

You write about middlemen — hospital administrators, people who work in insurance billing, pharmaceutical company staff — as contributing to high health care costs. But I imagine they don't want to lose their jobs.

Entire cities in the United States have been revitalized by the health care industry, but I'm not sure that's something to be proud of: doing things medically on your own people and moving money around to finance that system. It's not a great domestic product. It's not exportable.

Health care is now a bloated $3.5 trillion economy that makes a lot of people rich. Just look at their earnings reports on Wall Street, or hospital margins, which are on track to be the highest in human history this year. Many of these money games pass through the costs, and ultimately they're paid for by the patient. So a lot of people are getting rich but not the patient.

What do you make of the attempts by Congress to prevent the practice of surprise medical billing, when consumers get hit with unexpected bills for out-of-network treatment? Do you think it's going to be successful?

I don't. I think it's a shame that the special interests control Washington D.C. I was disappointed to learn that nearly all doctors groups are opposing all forms of surprise-billing reform. It's not because the doctors are opposed to the reforms — it's because a small fraction of their members are gouging patients and profiting.

One of your research interests is overtreatment. In the book, you describe your own experience with this, taking yourself off of a heartburn medication. Tell us more about that decision.

I think we, as a medical culture, have responded to consumerism. We've doubled the number of prescriptions that we write over the last 10 years.

I'm very well aware of the pill-popping culture that we have, where we look to a pill to cure everything. And I had heard about the long-term side effects of Nexium [a heartburn medicine that may cause problems with bone density]. And I thought, "Gosh, I don't need that. I stay in great shape. I try to eat healthy. I want to reduce any unnecessary risk." So I went to my doctor demanding an alternative, and he said, "Remember, there's your lifestyle."

We really don't know about the downside of some of these medications, things that we adopt in medicine that we assume are safe. But the reality is that in the long term, public health studies take a while to catch up.

How can patients protect themselves against unnecessary, even harmful screenings or treatments?

Most doctors do the right thing, or always try to. But much of medical care is non-urgent. There are a lot of different opinions out there. So I think from a patient standpoint, they should know that there is not a broad consensus among medical experts for a lot of things. Overtreatment is so rampant in some areas of medicine that when we asked doctors nationally [for a study] what percentage of the medical care you observe around you is unnecessary, in your opinion, they said on average 21% of it. That's 25% of diagnostic tests, 22% of medications and 11% of medical procedures. That means if you're a patient, it's a good idea to educate yourself and shop around.