Accessibility links
Police Say It Can Be Hard To Tell A Meth Case From Mental Illness : Shots - Health News Calming techniques officers learn during training for intervening in a mental health crisis don't seem to work as well when a suspect is high on meth. Police say meth calls can be much more dangerous. 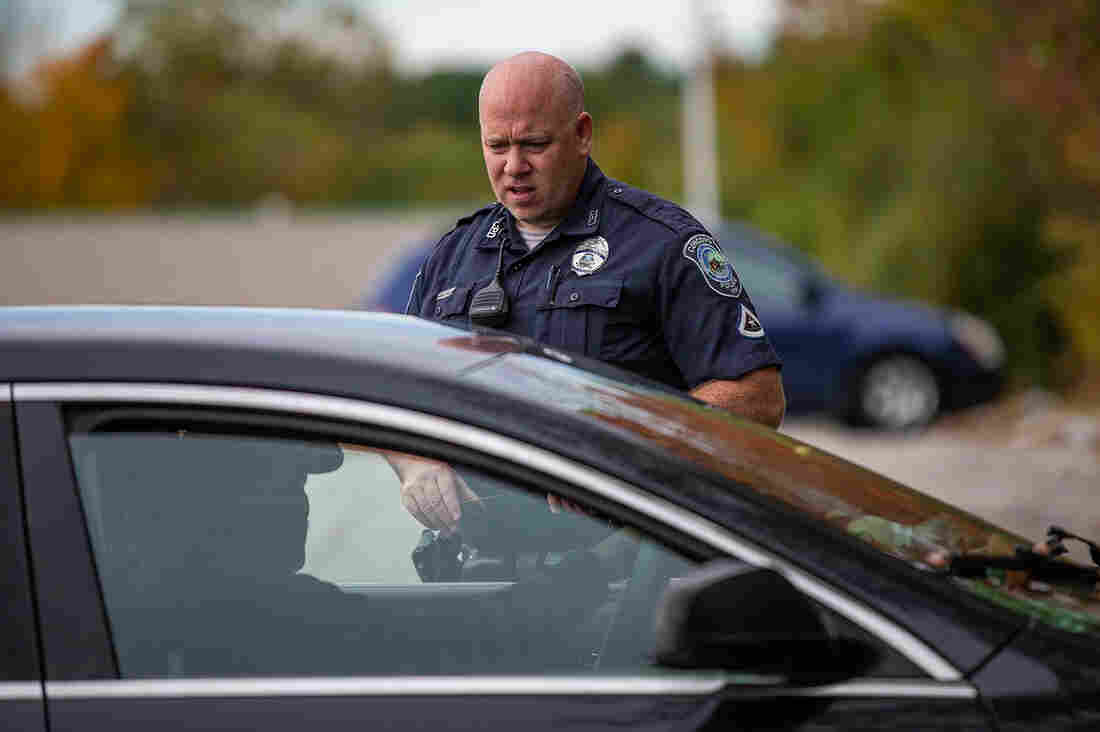 Officer Brian Cregg checks in with a man who says he is homeless and living in his car in Concord, N.H. In Concord, as in many parts of the Northeast, widespread use of meth is new, police say, and is changing how they approach interactions with people who seem to be delusional. Jesse Costa/WBUR hide caption 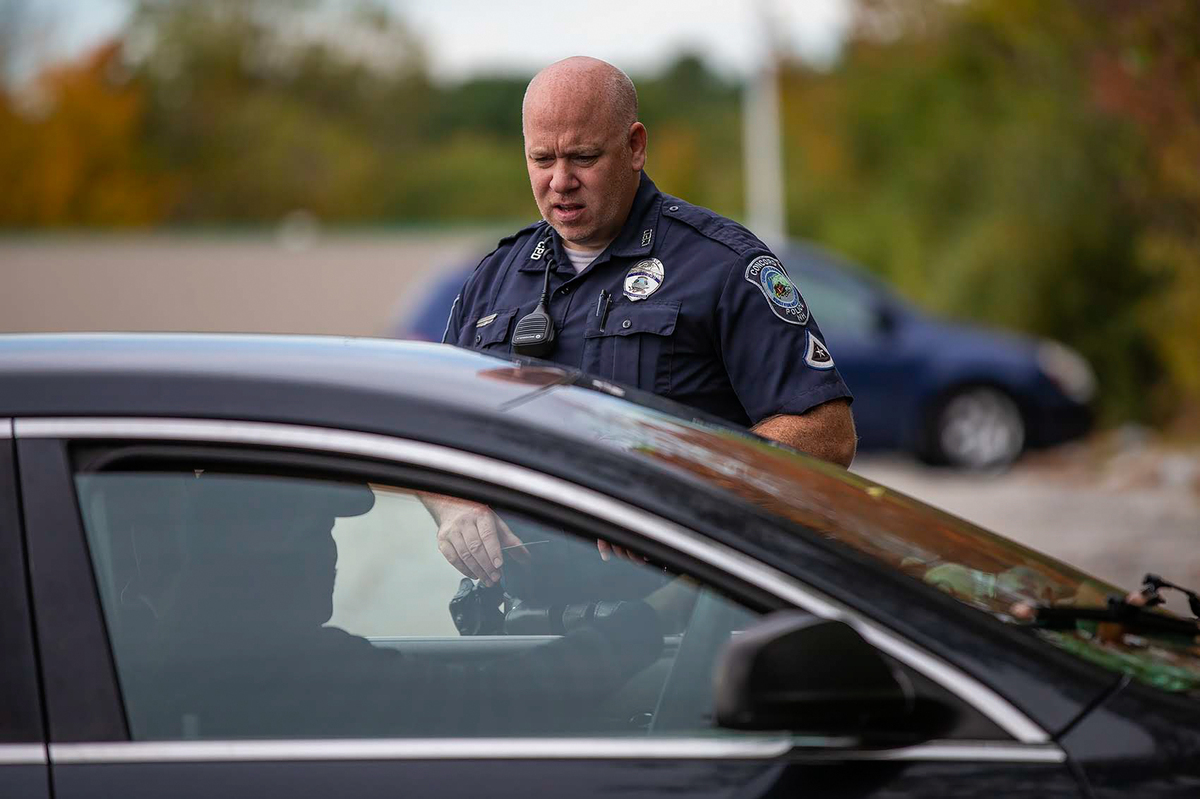 Officer Brian Cregg checks in with a man who says he is homeless and living in his car in Concord, N.H. In Concord, as in many parts of the Northeast, widespread use of meth is new, police say, and is changing how they approach interactions with people who seem to be delusional.

The dispatch call from the Concord, N.H., police department is brief. A woman returning to her truck spotted a man underneath. She confronted him. The man fled. Now the woman wants a police officer to make sure her truck is OK.

"Here we go," mutters Officer Brian Cregg as he steps on the gas. In less than three minutes, he's driving across the back of a Walmart parking lot, looking for a man on the run.

"There he is," says Cregg. The officer pulls to a stop and approaches a man who fits the caller's description. Cregg frisks the man, whose name is Kerry. NPR has agreed to only use Kerry's first name because he may have serious mental health and substance use problems.

"Why were you lying on the ground under a truck?" Cregg demands.

Kerry, head hanging, rocks back and forth, offering quiet one-line answers to Cregg's questions. There's a contest, Kerry says. The prize is a new pick-up truck, and he just has to find the truck with a key hidden underneath. He says he's searched three so far.

"Kerry did you take anything today?" Cregg asks. "You're not acting right."

"No, no," says Kerry, shaking his head forcefully. "I'm just stressed out."

Cregg watches Kerry, looking for signs — is this meth or a mental health problem? Over the past three or so years, as meth has surged in New Hampshire and across the U.S., it's become hard to tell. Police in many areas of the country where meth has maintained a steady presence have more experience making an assessment, but in Concord and many parts of the Northeast, the onslaught of meth is new.

Concord police say they need to know whether they're dealing with a mental health issue or drugs — or both — because it can make a difference in determining the best response.

Concord may send six to eight officers to subdue someone darting through traffic who is high on meth. The calming techniques these officers learned during training for a mental health crisis intervention don't seem to work as well when someone is out of control on methamphetamine. Several officers are recovering from injuries sustained during meth-related calls.

Cregg walks a few steps away from Kerry to speak to one of two other officers called to this scene. It turns out this is the third time in the past few months that alarmed drivers have reported finding Kerry under their car. Cregg decides Kerry's delusions are mental health issues, and doesn't call for more backup.

Kerry, now cuffed, climbs into the back of Cregg's cruiser and they head for the station. Kerry's suspected crime: prowling. 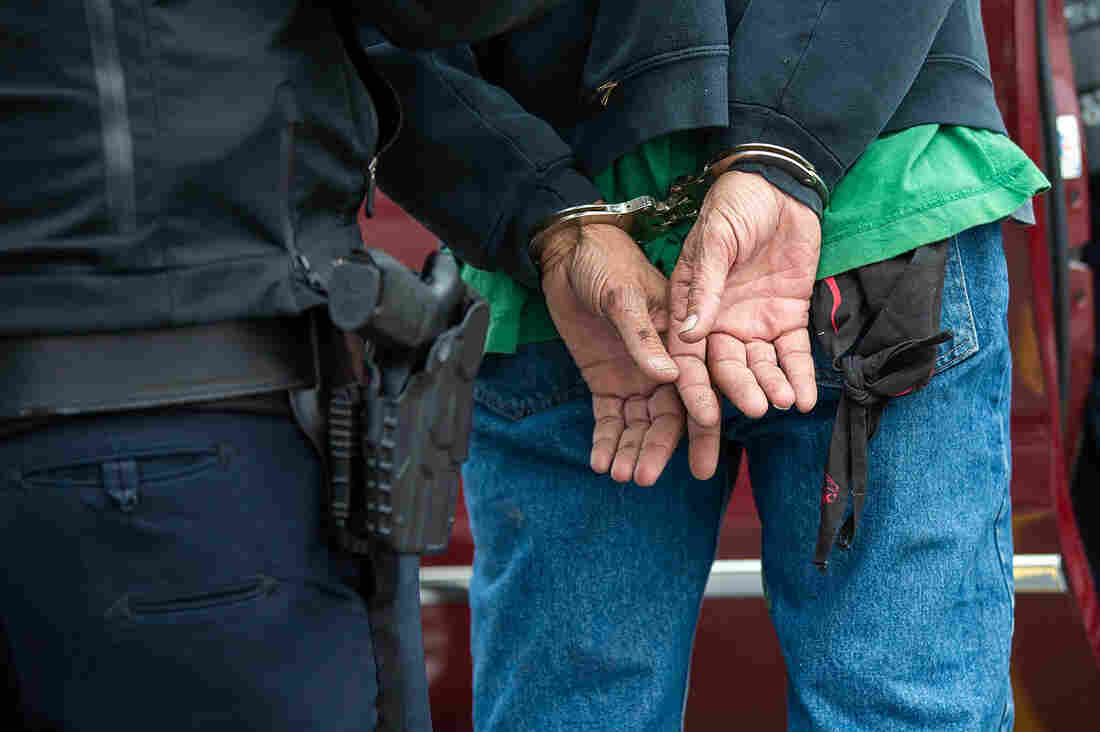 Concord Police arrest Kerry for prowling in Concord, N.H., after a witness identified Kerry as the person who'd been looking underneath cars in a shopping mall parking lot. Jesse Costa/WBUR hide caption 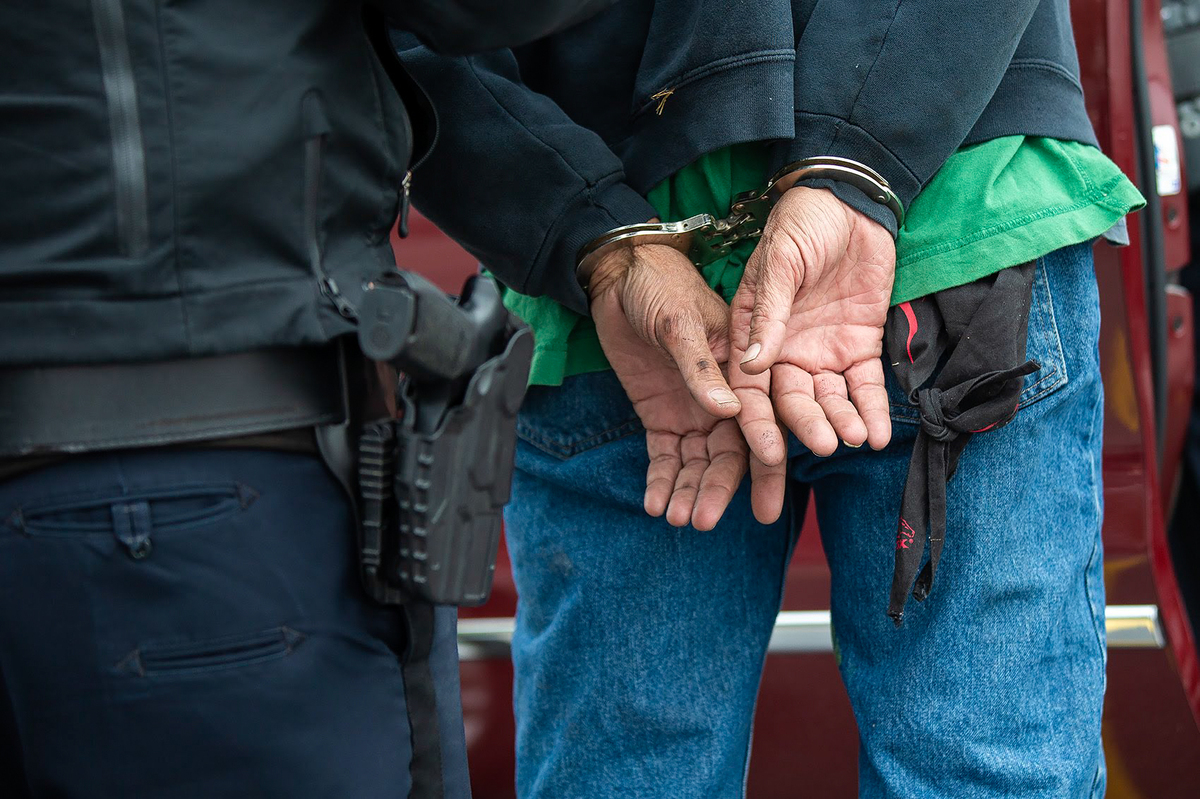 Concord Police arrest Kerry for prowling in Concord, N.H., after a witness identified Kerry as the person who'd been looking underneath cars in a shopping mall parking lot.

"Hey, uh, Kerry — man, you feel like you want to go up to the hospital to speak to somebody?" Cregg asks a version of this question four times.

"No, no," Kerry says repeatedly, "I've been through that route years ago; don't want to do it again."

Kerry says later that getting stuck in a hospital emergency room — waiting days, maybe weeks for an opening in a psych treatment program — makes his anxiety much worse.

At the station, Cregg finds something that changes his view of the day's events.

"What is that, Kerry?" Cregg asks, pulling a tiny plastic bag of glistening white shards out of Kerry's coin pocket. It appears to be meth. "This explains a lot."

Cregg says what he thought was psychotic behavior likely had more to do with meth.

But "on that call, they mimicked each other. I wasn't able to tell at first," Cregg says.

That may be because Kerry is one of the 9.2 million Americans coping with both a mental health problem and a substance use disorder. In this particular case, not being able to tell what fueled Kerry's delusions didn't cause any problems for him or the police. Things never got out of hand. But Concord Police Chief Brad Osgood says calls triggered by meth are often more challenging than this one.

"With somebody that's high on methamphetamine, you want to treat them a little firmer and control them," Osgood says, "because they often are very volatile and aggressive and you just want to treat that hostility, differently."

With meth now accounting for 60% of drug seizures in Concord, police say they often default to that firmer approach. Some mental health advocates worry that may mean police are using too much force with their clients. Sam Cochran, a retired major in the Memphis police department who co-founded and now helps lead CIT International, a crisis intervention program that includes training for police, says officers aren't making a diagnosis.

"The officer's foremost is 'how do I open up communications? How do I get compliance in order to accomplish safety?' " Cochran says.

There are visual signs of longer-term meth use that are less likely to show up among mental health patients: skin wounds and scabs, rotting teeth, dilated pupils. But addiction medicine specialists agree that it is difficult to determine what's going on, at first glance, with someone who appears extremely agitated.

Surging meth use is relatively new in New England. Cochran, a veteran of the Memphis police department, has dealt for years with this issue of meth's effects mimicking mental health issues. He says slowing things down and diffusing fear can work when dealing with people who are high on meth.

"But let's be real, there are some individuals that are so sick," Cochran says, that "officers find themselves having to act immediately to protect safety. Sometimes that may mean a hands-on approach."

Cochran and another mental health advocate, Dr. Margie Balfour, an associate professor of psychiatry at the University of Arizona, say the goal is to only use force as a last resort.

"And then, ideally," Balfour says, "whether it's meth or mental health or both ... you're going to be able to take that person to somewhere where they are going to get treatment — and not to jail."

Balfour is also chief of Quality and Clinical Innovation at Connections Health Solutions. The organization operates a network of psychiatric crisis centers in Arizona where, instead of making an arrest, police can drop off anyone 24 hours a day who is out of control on meth or who has a mental health condition. Balfour says 20% of adults seen at Connections test positive for meth.

Kerry was due in a New Hampshire court last week, where a judge could have ordered drug treatment or an evaluation. Kerry didn't show up for that arraignment — but says he is trying to reschedule.

In the audio of this story, as in a previous Web version, we characterize CIT International as a crisis intervention police training program. Training actually is just part of what CIT does.